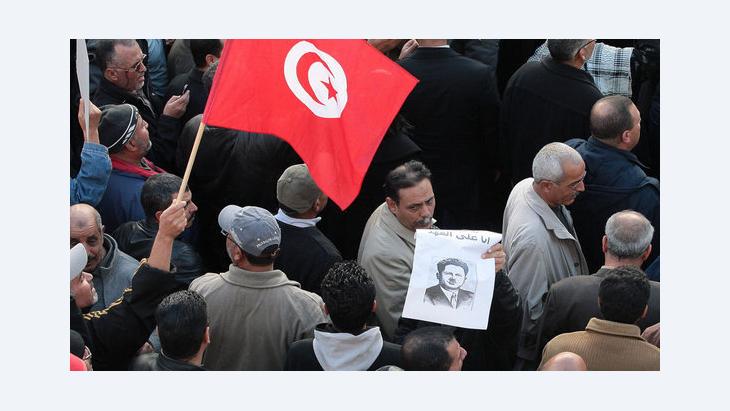 ﻿Zine El Abidine Ben Ali ruled Tunisia with an iron fist for more than 20 years before he fled the country in January 2011. But two years later there is still little to celebrate for most Tunisians. Sarah Mersch reports from Tunis

﻿﻿The road to democracy is more difficult than Tunisians had hoped after Ben Ali fled the country on January 14. During December 2011, people were on the streets for four weeks in protest of the social and political issues, following the self-immolation of ﻿Mohamed Bouazizi, a Tunisian street vendor who set himself on fire to protest the confiscation of his goods. Two years on, most Tunisians continue to face the same problems.

"The situation could be better," a student named Mohamed said. "There are so many social and political problems. If the ruling government and the opposition could work together, then things would move forward."

But the government is struggling to get the country's economic problems under control. The economy is still suffering from the the effects of the revolution. Many tourists are afraid to visit the Tunisia and foreign investors have been put off by strikes and road blocks, which shut down production. The unemployment rate is around 17 percent, higher than before the revolution, according to goverment figures. Almost half of the population is unemployed in some parts of the country, especially in the interior. And around 40 percent of university graduates are looking for jobs.

Tunisians are experiencing the effects of the crisis in their wallets and purses as a result of rising food prices. The inflation rate is around 6 percent. Milk has hardly been sold for the last three years, meat and potatoes are so expensive that most people cannot afford them. The tense situation frequently forces Tunisians onto the streets. One of the protestors is lawyer Hayat Jazar. Nothing works, she said. 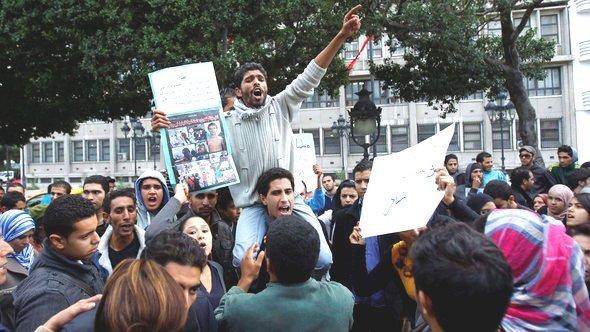 Little to celebrate: Many Tunisians say that little has changed for the better two years after Ben Ali's ouster. Pictured: A demonstrator holds pictures of what they claim to be people injured during recent clashes between protesters and security forces in Siliana, during a protest against police violence outside the interior minister's office in Tunis

​​"There is absolutely nothing being done. There is no justice and no work. The demands of the people are not being put into place, apart from the freedom of expression," she explained.

But the government, which is led by the moderate islamist party Ennahda, is doing everything it can to keep people quiet. Charges brought against critical bloggers and journalists are common. "So we we'll have a government like we did under Ben Ali," Jazar said.

The protesters demanded a new constitution directly after the revolution in order to break away from the dictatorial structures forever. In October 2011, Tunisians voted for a constituent assembly, which was to give the country a new constitution. Actually, that had to be done within a year, but the elected officials need more time than they had initially thought.

Mohamed, the student, closely follows the work of the elected officials. And he is disappointed by their work. "The representatives fight over trivial issues that don't affect the people. It's pure politics. But if the constitution is finished in two, three years and there are new elections, then the situation in Tunisia will definitely be better," he said.

Lawyer Hayat Jazar also doesn't want to give up hope that Tunisia will successfully reach the end of the road to democracy - even if there are a few detours along the way. It's not lost as long as the people have the freedom of expression, she said.

"The revolution is like dough with yeast. It takes a while to rise," she added. In the end she believes that Tunisians will use their newly found freedom to advance democracy.

Tunisia is considered a paragon of the Arab Spring. Despite democratic reforms, however, a mood of political frustration and economic despair still prevails, particularly among ... END_OF_DOCUMENT_TOKEN_TO_BE_REPLACED

Equality in divorce, a ban on polygamy: reformers of Islamic family law have a clear agenda. They are exploiting the ambiguity of traditional jurisprudence. By Joseph Croitoru END_OF_DOCUMENT_TOKEN_TO_BE_REPLACED

Hassan Aourid is one of the most important political and intellectual figures in Morocco. In interview with Ismail Azzam for Qantara, Aourid outlines his vision of the decline of ... END_OF_DOCUMENT_TOKEN_TO_BE_REPLACED

The Arab world is one gigantic pressure cooker. For the most part the lid of repression is on, but it is boiling over with increasing frequency. Whether in Lebanon, Iraq or in ... END_OF_DOCUMENT_TOKEN_TO_BE_REPLACED

In his new film, award-winning Tunisian director Nouri Bouzid grapples with the traumas of women held captive by Islamist extremists, victims of the so-called ʺsexual jihadʺ in ... END_OF_DOCUMENT_TOKEN_TO_BE_REPLACED