Sophie Bessis is one of the best-known French-speaking feminists from the Maghreb. In her fight for women's rights, she moves between the conflicting worlds of Europe and Africa, showing equal disdain for Western arrogance and for what is often the pronounced identity policy of the Orient. Kersten Knipp met with Sophie Bessis

​​ There they sit, hardly deigning to speak with her, fixing her with a gaze that could hardly be more arrogant: "We are the true people!" this look seems to say. "You are but an appendage to civilisation, if you're anything at all, that is! In any case, we don't see any reason to take you seriously. Be glad that you are even permitted to attend classes in our midst!"

The small scene in a French school in what was then colonial Tunisia opens Sophie Bessis' book about "The West and the Others" ("L'Occident et les autres").

This formative experience of exclusion marked the beginning of a life of research, a long scholarly biography in which Sophie Bessis has persistently addressed one key question: What is the foundation for Western superiority over so many other regions in the world – a superiority that is only now gradually declining?

Sophie Bessis, who was born in the 1940s into a Jewish family in Tunis and has lived for a long time in Paris, looks for an answer with the help of recent decolonialism theories, in particular their linguistically critical variants. 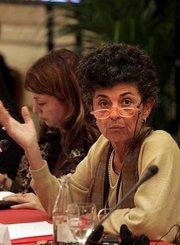 Sophie Bessis was born in the 1940s into a Jewish family in Tunis. She now lives in Paris

​​ The West, Bessis writes, interprets its relations with other world regions, above all with the Arab world, in terms of opposites. The prime instrument used for this purpose was for a long time Christianity – and it was the religious argument that drove the deepest breaches between Orient and Occident.

After the end of the Second World War, which finally discredited once and for all any still-extant racist theories, the Universal Declaration of Human Rights and the postulated ideal of equality apparently still did not override people's need for sharp lines of demarcation between cultures.

But it did force people to come up with cultural arguments in their defence. Ever since then, the discourse has focused on the "backwardness" of the Orient, which makes the export of Western values, chief among them democracy and human rights, seem more urgent than ever.

With respect to these values, the formerly colonised countries became, and still are, consigned to the role of eternal pupil: first they were not yet mature enough for Western civilisation, and now they are supposed to adopt it wholeheartedly. No wonder, Bessis says, that the protégées react with so much irritation.

This irritation, she warns, can easily be channelled in the wrong direction by politicians. Shiite nationalism in Iran is probably the most chilling current example in the Muslim world of a politics that defines itself primarily in negative terms, namely in opposition to the West, and which has adopted differentiation as its foremost priority.

Axis of populists: A fundamental change in function: while identity politics used to lend ideological shape to independence movements, today they are usually used for populist ends

​​ But this phenomenon can be found outside the Muslim world as well. In Venezuela and Bolivia, for example, Chavez and Morales are currently playing the "indigenous card", while Robert Mugabe in Zimbabwe imposes a perverse form of "négritude".

Faced with examples like these, Bessis has discerned a basic functional change in identity politics: while it once served to provide an ideological basis for independence movements, giving members a shared frame of reference and hence additional punch, today it is usually misused for populist ends – less for the good of a movement's simple members than for its leaders.

These movements thus expose a major shortcoming in modern identity politics. It's true that it perhaps lends a feeling of satisfaction, giving a movement's followers the illusion that they are acting independently, implementing decisions they have made themselves and living out an identity that they alone possess, one which distinguishes them from all others.

In fact, though, this politics does not represent any true alternative to the dominance of the West, Bessis argues.

This is because it follows the principle of individualism, as is evident above all from the behaviour of its leaders. Self-interest, pressure-group politics, cold calculation: the logic of these cultural, religious or ethnic movements is no different from what we are familiar with from their Western capitalist counterparts. There is no longer an "outside", Bessis points out, i.e. none of these movements is able to position itself outside of capitalist logic.

All are faced with a problem that has for some time been referred to as "colonisation without colonialists": a condition in which the capitalist game rules have pervaded the entire world, with no serious alternatives yet on the horizon.

The veil as symbol

Women, she writes, are the last unambiguous symbol of what are otherwise thoroughly modernised – and that means above all: thoroughly shaken – societies.

Since in most countries in the Arab world a new type of society, adapted to the game rules of the world market, has not yet been established, people are still searching for behavioural guidelines. They find them in religion, or more precisely, in its symbols.

This symbolism is staged primarily by women: "identity = religion = veiled woman" – this is the equation Bessis uses to explain the phenomenon of the new religiosity. Many women (and men) presumably have their problems with this formula.

The question that remains is: Can cultural or religious symbolism prevail in the long run against the logic of the world market? Bessis has her doubts.

At the same time, though, she criticizes the dominance of Western culture. And instead pleas for a world where no schoolchild feels justified anymore in looking down on another.

Portrait Emel Abidin-Algan
Faith without the Headscarf
Her decision caused quite a stir – in Germany as well as in Turkey. Emel Abidin-Algan, daughter of the founder of the Islamic association Milli Görüs, has put aside her headscarf after wearing it for over thirty years. The 45-year-old mother of six children spoke with Ariana Mirza about her motives

Dossier
Feminist Approaches to Islam
Muslim women struggling for emancipation often turn to tradition for inspiration. They analyse the Koran and the history of Islam and challenge interpretations which have been accepted for centuries. Read this and more in our dossie

END_OF_DOCUMENT_TOKEN_TO_BE_REPLACED
Social media
and networks
Subscribe to our
newsletter