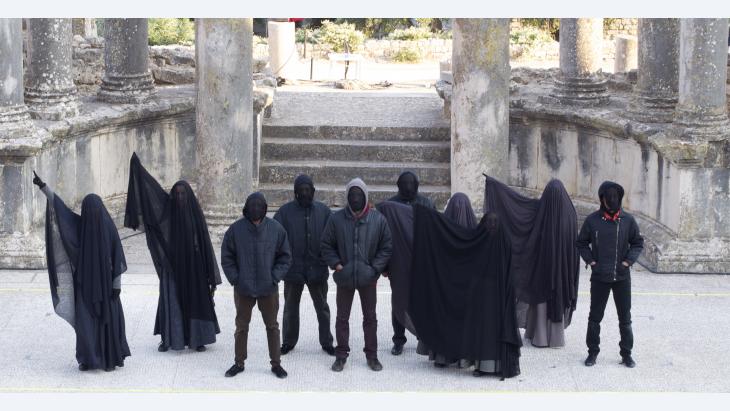 Warning against a Black Wave of Islamism

In his first play since the overthrow of Ben Ali two years ago, Tunisian theatre director Fadhel Jaibi warns against the rise of the Islamists. But according to Sarah Mersch, "Tsunami" lacks the subtle analysis so characteristic of his earlier productions

It is past three o'clock in the morning when Fadhel Jaibi calls it a day and ends rehearsals in the Roman amphitheatre of Dougga. The next day, his latest play, Tsunami, will be staged for the first time in front of a big audience in his native country, Tunisia. The tension is palpable: the unusual location has forced the director to strip his play down to the essentials and to do without video projections, lights, and backdrops. His cast will perform in broad daylight on this ancient stage in the north-west of the country, where Fadhel Jaibi himself discovered classical theatre in his youth.

Jaibi and his partner, Jallila Baccar, who writes the scripts for his plays, are two towering figures in contemporary Arab theatre. Even before the upheaval in Tunisia, Jaibi was making committed, political theatre in which he subtly yet emphatically criticised the powers-that-be in the country.

​​Tsunami is the last play in a trilogy in which Baccar and Jaibi dissect the state of politics in Tunisia. After Khamsoun and the almost prophetical Amnesia (Yahia Ya'ich), in which they told the story of the overthrow of a despot in 2010, Tsunami is their first play since the 14 January 2011, when the former ruler, Zine El Abidine Ben Ali, fled the country. It also addresses the identity questions that are currently being posed and debated in Tunisia.

Fear of the Islamists and the struggle against them 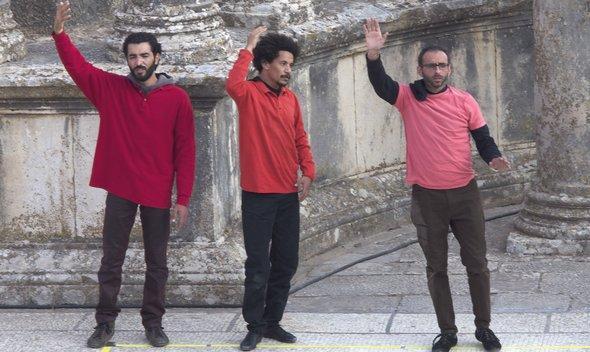 "Tsunami" as gloomy prophecy and warning for Tunisian society: Director Jaibi not only sees a black wave of Islamism breaking over Tunisia, but also a torrent of words, fears and urgency

Dorra is in her mid-twenties. When she discovers that her family wants to marry her off against her will, she flees. Then there is Hayet, a left-wing activist in her sixties. Their paths cross and Hayet offers the younger woman a place to stay. But it is not all peace and harmony; there is a lot of friction between them too. Although they do have certain things in common – fear of the Islamists and the struggle against them – they cannot agree on the best way to go about fighting the Islamists.

Before their eyes, the world around them is descending into a state of civil war – a development the protagonists can only stand by and watch helplessly, transfixed by the situation.

In a series of images, Tsunami recalls the political events that have shaped Tunisia over the last two-and-a-half years. Again and again, individual actors break away from the carefully choreographed group scenes, establishing a link between the story of Dorra and Hayet and the political context. The assassination of the opposition activist Chokri Belaid in February 2013 plays as important a role in the play as the protests in Siliana, a small town in Tunisia, where police brutally attacked demonstrators in November 2012. Many were injured by shot in the attack.

In Jaibi's play, citizens of Siliana demonstrate; their injured eyes bound; their placards devoid of any slogans. Their social demands are not of interest here, neither to the Tunisian government and the opposition, nor to Fadhel Jaibi and Jallila Baccar, who follow the logic of politics and also focus primarily on the debates about identity in this play. 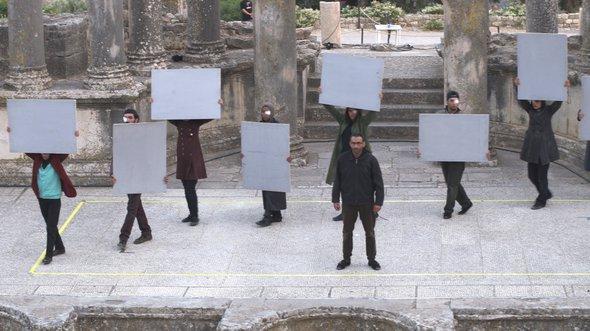 Finger-wagging instruction: Fadhel Jaibi seems to lack the necessary distance to the daily disputes that are the focus of the play to come up with a more subtly differentiated analysis, Sarah Mersch writes

When speaking about Tsunami, Jaibi is keen to emphasise that his aim is to warn people about an Islamist state. The lines in his play are straight; the roles clearly distributed. On the one hand, we have the Islamists, a uniform mass of people, each of whom is swathed in black garments. On the other we have the secularists, each of whom is wearing a top of one single, vibrant colour. There is little room for any nuances in all of this.

The stylising of the battles for political orientation and the public sphere in Tunisia are typical of Tsunami, which lacks the subtlety of earlier plays by Jaibi and Baccar. The play works through new hate figures. However, the way it deals with the period since the overthrow of the Ben Ali dictatorship is often quite crude. Jaibi preaches to his audience, warning them against the Islamists. He seems to lack the necessary distance to the daily disputes that are the focus of the play to come up with a more subtly differentiated analysis.

Into this, his first play since the revolution, the director packs everything he was unable to say beforehand – or was only able to say in code. For this reason, Tsunami is not only a warning against the black wave of Islamism that Jaibi sees washing over Tunisia, but also a tidal wave of words, fears and urgency. Perhaps his next play will be a little less overloaded and will see him return to his subtlety of old.

Recep Tayyip Erdogan, disappointed by the European Union’s reluctance to integrate Turkey into its ranks, has re-directed his country’s diplomacy toward the Maghreb and Africa to ... END_OF_DOCUMENT_TOKEN_TO_BE_REPLACED

The rollout of coronavirus vaccines in the Middle East and North Africa is already taking place on a massive scale, with the United Arab Emirates leading the way. Nevertheless, ... END_OF_DOCUMENT_TOKEN_TO_BE_REPLACED

Tunisia has launched a successful transition to democracy, but difficult economic and social times lie ahead. According to political scientist Said AlDailami, Europe should focus ... END_OF_DOCUMENT_TOKEN_TO_BE_REPLACED

Mass protests began in Egypt on 25 January 2011. They triggered the overthrow of long-time ruler Mubarak. Ten years later, many human rights activists and journalists are in ... END_OF_DOCUMENT_TOKEN_TO_BE_REPLACED

Mass protests began in Egypt on 25 January 2011. They triggered the overthrow of long-time ruler Mubarak. Ten years later, many human rights activists and journalists are in ... END_OF_DOCUMENT_TOKEN_TO_BE_REPLACED

Recent unrest shouldn't come as a surprise to anyone who's followed Tunisia's trajectory. The image of the North African country as the only "survivor" of the uprisings in the ... END_OF_DOCUMENT_TOKEN_TO_BE_REPLACED
Author:
Sarah Mersch
Date:
Mail:
Send via mail

END_OF_DOCUMENT_TOKEN_TO_BE_REPLACED
Social media
and networks
Subscribe to our
newsletter