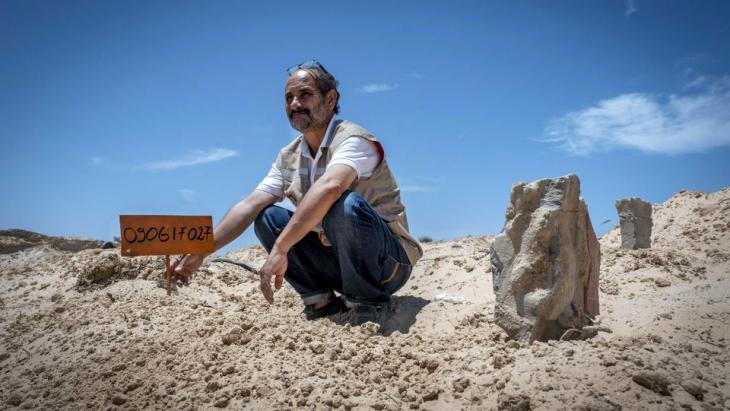 Tunisia's ″Cemetery for the Unknown″
The gravedigger of Zarzis

Every year, the bodies of migrants who die trying to cross the Mediterranean wash ashore in Tunisia. Sarah Mersch met the man who holds funerals for the deceased, affording them the respect that was often lacking during their lifetime

Chemseddine Marzoug quickly packs two bottles of water before he turns off the main road to head south on a bumpy dirt road that runs a hundred metres through an olive grove and an abandoned piece of land. At the edge of the former garbage dump, there is a sign that reads "Cemetery for the Unknown" in half a dozen languages.

Marzoug has buried over 350 corpses in the past 10 years; 74 in 2017 alone. He fears that there will be many more. "In winter, when the east wind blows, a particularly large number of corpses are washed up on the shores of the Gulf of Zarzis."

The small town of Zarzis on the southern Tunisian coast is about 50 kilometres from the Tunisian border with Libya, where refugee boats headed for Europe regularly depart. And regularly, the ships of death, as Marzoug calls them, encounter distress at sea, sink or capsize. If the passengers are lucky, they are rescued by NGO boats or by the navy of one of the neighbouring countries. "If not, they come to me."

Every grave bears a story

The 52-year-old with greying hair trudges along the anonymous graves. He often stops and bends over to water the flowers he has planted on the mounds of soil. He has also buried two children here; Lego blocks and toy cars lie on their graves. Every grave bears a story, even though the volunteer of the Tunisian Red Crescent does not know the names or origins of the deceased. 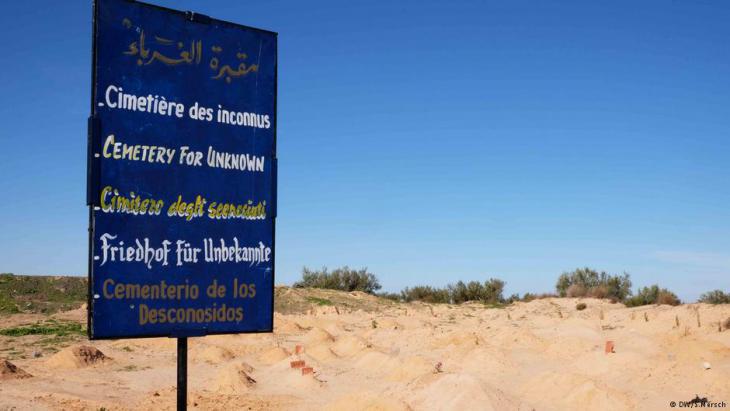 "Cemetery for the Unknown" on the edge of a former rubbish dump: Marzoug clearly blames Europe and its border policy for the deaths. By not investing in Africa or offering visa facilitation, it is pushing people to board the boats, says the 52 year-old

Only one mound stands out, marked with a gravestone rather than the customary numbered metal plate. "This here is Rose-Marie, a 28-year-old teacher from Nigeria," he explains. She died during the crossing in the spring; the 126 survivors on her boat were rescued by the Tunisian coast guard. "Her partner lives near here in the refugee centre. He was here the day before yesterday and brought flowers," says Marzoug.

Marzoug used to work as a fisherman. From the late 1990s onwards, he and other fisherman began finding corpses or body parts in their fishing nets. It was then that Marzoug started co-ordinating the funerals with the authorities and burying the dead in the cemetery of the small town. But as time passed, the number of corpses grew. "The people complained that the cemetery was too full; that since we started burying foreigners there, there was no more space for local people," he says.

The local authorities then granted the Red Crescent a piece of abandoned land on the edge of the city where locals dumped their garbage. Ever since then, Marzoug has been burying the nameless dead there. 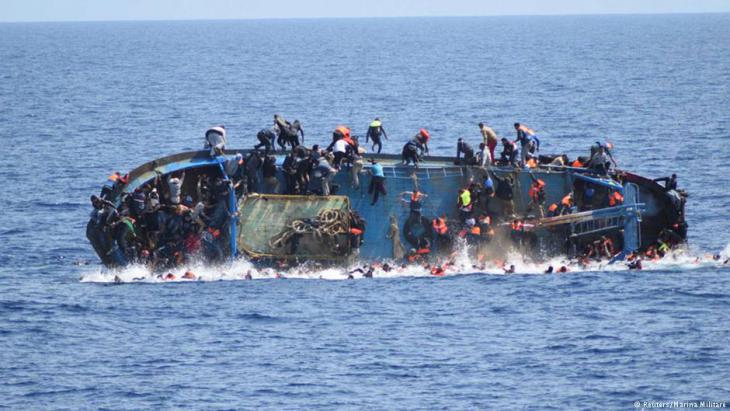 A mass grave for refugees: according to the Organisation for Migration (IOM), at least 246 refugees and migrants died in January trying to cross the Mediterranean, compared with 254 in January 2017. Refugees attempting to reach Europe by sea have been dying at an annual rate of more than 3,000 since 2014. In January more than 6,600 refugees arrived in Europe from the south, an increase of 600 compared with the same time last year

"These people have suffered repression in their countries of origin and in Libya, sometimes dying in the desert or taking the ships of death," says Marzoug. He is convinced that at least in death, they should be given a little respect and dignity.

His task is not always easy, says Marzoug. He often buries only body parts or very decayed corpses that have been in the water for a long time. But he has found his calling, as he maintains that in death, everyone is equal, regardless of origin or religion. "If we do not preserve what little human humanity is left, we will soon be facing a third world war," he says.

″Some people said I was crazy″

Marzoug comes to the graveyard two to three times a week to make sure everything is all right. "Some people said I was crazy," he says, shrugging his shoulders as he walks from grave to grave. He keeps rubbing his back, as the large number of corpses this year has taken its toll on his health.

Marzoug clearly blames Europe and its border policy for the deaths. By not investing in Africa or offering visa facilitation, it is pushing people to board the boats. Two of Marzoug's sons have also risked the sea crossing to Europe. 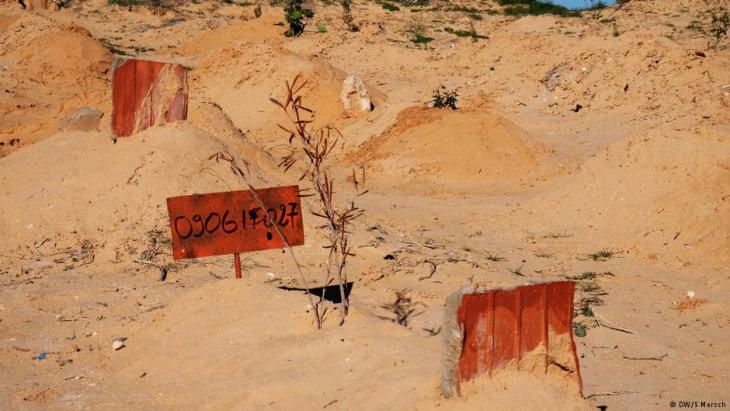 Final resting place for drowned refugees: Chemseddine Marzoug has buried over 350 corpses in the past 10 years; 74 in 2017 alone. The small town of Zarzis on the southern Tunisian coast is about 50 kilometres from the Tunisian border with Libya, where refugee boats headed for Europe regularly depart. And regularly, the ships of death, as Marzoug calls them, encounter distress at sea, sink or capsize

"Maybe the dead spared them from death," he says, although he was always against them making the journey. "They were extremely patient in the seven years that followed the revolution, despite having no work or prospects." Today, he understands their decision a bit better, after all, young people in Tunisia are scarcely better off than the dead. "This way, at least, they die with dignity at sea – or make it to Europe, where there is at least democracy."

Another grave has been dug. It will be the last one on this site; there is no more space. Since there is no government support, the Red Crescent is gathering donations to buy a new cemetery and a hearse so that the dead are no longer transported in a pickup truck.

If no one helps them, then "in the future, we will gather wood, burn the corpses, fill containers with ashes and throw them back into the sea," says Marzoug. He adds that this is the only other option if no one respects the dead on land. One thing is clear: the dying in the Mediterranean is far from over.

Home
Print
Newsletter
More on this topic
Interview with the Tunisian musician Anouar Brahem: ″Merely a staging-post for refugees″Hamza Meddeb on the "No Future" generation: Tunisia's ticking time bombPhoto essay: "Search and rescue in a sea of refugees"
Related Topics
European Union (EU), Islam and the West, Policy on refugees and migration, Refugees
All Topics

The devaluation of the Egyptian pound combined with rising food prices is taking its toll on Egypt. More and more people are slipping into poverty. Karim El-Gawhary reports from ... END_OF_DOCUMENT_TOKEN_TO_BE_REPLACED

Since returning to power in Afghanistan, the Taliban have steadily eroded the rights and opportunities of women and girls, particularly their access to education. But Afghans are ... END_OF_DOCUMENT_TOKEN_TO_BE_REPLACED

The book "The Invention of the Maghreb: between Africa and the Middle East" prompts us to review basic terminology. This includes terms that we use almost every day as if they are ... END_OF_DOCUMENT_TOKEN_TO_BE_REPLACED

Tunisia has been going through a severe economic and political crisis in recent years. More than one in three young people there are unemployed. For many skilled, qualified and ... END_OF_DOCUMENT_TOKEN_TO_BE_REPLACED

At the end of every year, the team at Qantara.de gives you a run-down of the ten most-read articles on the site over the past 12 months. Here is a quick overview of the stories ... END_OF_DOCUMENT_TOKEN_TO_BE_REPLACED

The government in the Netherlands, one of the last European nations to abolish slavery, has made an historic apology. But some feel that there is still a long way to go. By Ella ... END_OF_DOCUMENT_TOKEN_TO_BE_REPLACED
Author:
Sarah Mersch
Date:
Mail:
Send via mail

END_OF_DOCUMENT_TOKEN_TO_BE_REPLACED
Social media
and networks
Subscribe to our
newsletter