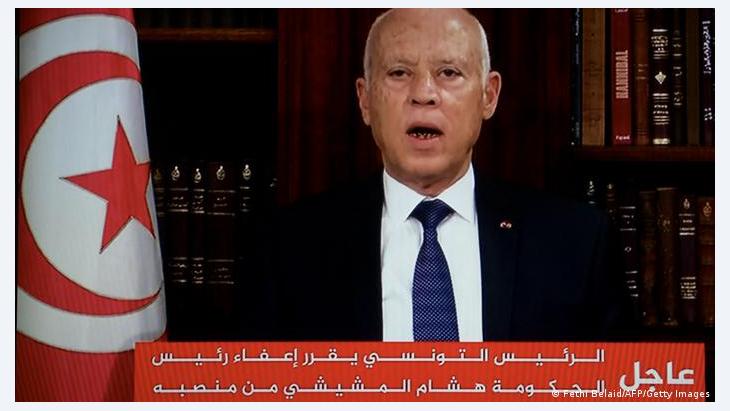 The move – a decade on from Tunisia's 2011 revolution, held up as the sole success story of the Arab spring – comes despite presidential powers being largely confined to security and diplomacy under a constitution that enshrines a parliamentary democracy.

It also comes after a prolonged period of deadlock between the president, prime minister and legislature, which has crippled management of a coronavirus crisis that has seen deaths surge to among the highest per capita rates in the world.

After Saied announced parliament's suspension following an emergency meeting at his palace, hundreds took to the streets of the capital in celebration, filling the air with the sound of car horns and fireworks.

Before Saeid's announcement, thousands of Tunisians had marched in several cities protesting against the Islamist-inspired Ennahda, criticising the largest party in Tunisia's fractious government for failures in tackling the pandemic.

The party, which also has the most seats in Tunisia's parliament, was swift to rebuke the president.

Party leader Rached Ghannouchi, who is also speaker of the legislature, was blocked along with several lawmakers from entering parliament by soldiers, according to a video on Ennahda's Facebook page.

Mechichi, the prime minister, had not responded to his sacking on Sunday night. In the 10 years since the revolution, Tunisia has had nine governments, some of which have lasted only a few months, hindering the reforms necessary to revamp its struggling economy and poor public services

Tunisia has recently been overwhelmed by Covid-19 cases, including more than 18,000 deaths. Last week, Mechichi fired his health minister over his handling of the pandemic as cases skyrocketed -- the latest in a string of health ministers to be sacked. (AFP)

More on this topic
Tunisian medics struggle to tackle virus as tourists soak up sunTunisia ten years after the Arab Spring: Where are the democratic dividends for Tunisians?Arab Spring ten years on: Tunisia is paralysed by a political culture of consensus
Home
Print
Newsletter
MoreAll Topics

END_OF_DOCUMENT_TOKEN_TO_BE_REPLACED
Social media
and networks
Subscribe to our
newsletter