Tunisia's opposition is fragmented, and prospects for political consensus are still remote. This means it is too soon to expect a rapid transition to a democratic post-Ben Ali era. An analysis by Sigrid Faath

The lowest common denominator of the opposition and protest movement: demonstrations against Ben Ali and the governing RCD

​​ Until December 2010, the Tunisian people were regarded as largely non-politicised, averse to militant activity and ready to compromise. But social unrest during that month ushered in a period of change, with initial calls for social change developing into full-blown criticism of government policies.

The president, who came to power in 1987, and members of his family, who are regarded as corrupt, became the focus of this popular resentment, and protesters' demands became directly political. There were calls for Ben Ali to go. It was, nevertheless, a surprise when the news came through on 14 January that he had indeed resigned and fled the country.

In accordance with the constitution, official duties were transferred on 15 January to the speaker of the lower chamber of parliament, Fouad Mebazaa. He put Mohammed Ghannouchi, who remained in the post of prime minister, in charge of forming a national unity government that would then be responsible for preparing presidential elections.

But the challenge of finding politically experienced replacements for the politicians of the ruling RCD party has been problematic from the outset.

Systematic weakening of the opposition

Tunisia has effectively been governed by a single party since independence in 1956, although the constitution states that the country is a multi-party system. When President Ben Ali took office in 1987, the ruling party was renamed the Constitutional Democratic Rally (RCD) and given a structural boost through the promotion of younger members and women, among other measures.

​​ On the other hand, opposition parties, human rights organisations, and initiatives set up by legal experts and lawyers in favour of the rule of law and an independent justice system were systematically obstructed. Even constructive reform proposals – including those that came from within the ranks of the ruling party itself – were swiftly interpreted by the government as disloyal and punished with sanctions.

This approach characterised the era of both the first Tunisian president, Habib Bourguiba, and that of his successor, Zine el-Abidine Ben Ali.

These less than conducive conditions explain the organisational and programmatic weakness of opposition forces, the barely pronounced political profiles of their leaders, their marginal anchoring in the population, and the disinterest of the younger generation in these parties.

The situation did not change, even in 1993 when opposition parties were given grants to help with the cost of electioneering and the publication of party literature. In 1994, the government decided for the first time to reserve 19 seats for opposition parties in the upper chamber of parliament. No party would have made it into parliament "by virtue of its own efforts".

The composition of the opposition

Since the last legislative elections in 2009, six of the eight officially authorised opposition parties have entered the upper chamber of parliament, holding 53 of a total 214 seats.

The parties concerned are the Movement of Socialist Democrats (MDS), the Party of People's Unity (PUP), the Unionist Democratic Union (UDU), the Social Liberal Party (PSL), the Green Party for Progress (PVP) and the "Ettajdid" Renewal Movement. Up to now, these parties supported the governing party's policy programme, or more specifically, the president's programme.

But just like the two other opposition parties that are not represented in parliament – the Progressive Democratic Party (PDP) and the Tunisian Front for Democracy and Freedom (FTDL) – they nevertheless advocated in principle political liberalisation and reforms. None of these parties have a clear-cut profile, or identifiably different policy programmes.

Moncef Marzouki of the "Republican Congress" (CPR), who returned to Tunisia and was the first to declare his candidacy in the upcoming presidential elections, is seen here being cheered on by his supporters

​​ They are primarily "capital city parties" with no distinct popular support base in other parts of the country. Another hallmark of these groups is their strong focus on the personalities of leadership figures and the quarrels that result from this.

The Islamic opposition organisation "Ennahda" – which enjoyed greater influence from the 1980s through to the mid-1990s and whose former leader Rashid al-Ghannushi announced from his British exile that he would be willing to join a national unity government – is structurally on its knees.

The Tunisian Workers' Communist Party (PCOT) is a marginal factor. Previously, human rights activists and individual critics of the regime, journalists, lawyers and judges met within their own associations or professional organisations, the activities of which were systematically scotched. It was a similar situation for the trade union federation UGTT and its regime-critical wings.

The state did not allow autonomous, civil-society organisations any room to manoeuvre. If an association wanted to avoid being perpetually obstructed by the administration, it had to avoid adopting a stance contrary to that of the state leadership. Authorised associations – and authorised parties – were expected to share the fundamental position of the regime and to actively support its policies or at least conduct themselves in a neutral fashion.

The same applied to the media, journalists and to private radio and television broadcasters, once private initiatives were permitted here for the first time in 2003.

Since independence, Tunisia has undergone a successful process of statehood formation and developed a national Tunisian identity. Where the country has failed – like many of its neighbours – is in the creation of opportunities for institutionalised debate over the divergent opinions and demands of different sections of the population.

The end of the Ben Ali era opens up a new opportunity to make up for this failure. It is, however, a process that requires time, patience and a readiness for compromise. Large numbers of protesters are still calling for a kind of tabula rasa with regard to the RCD.

When the composition of the government of national unity was announced on 17 January, not all protesters were happy that members of the RCD had managed to hold on to key ministerial portfolios, and that the interim cabinet only included three representatives of legal opposition parties (FTDL, PDP, "Ettajdid" Movement), three trade union representatives and several independents. Only a day later, three ministers from the opposition UGTT trade union and two other ministers quit the interim government; two days later, the RCD members of the cabinet left the party. 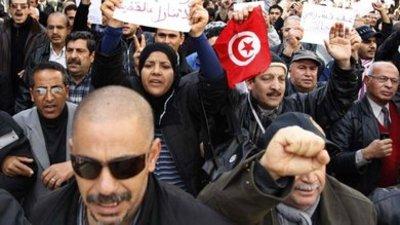 Quo vadis Tunisia? Hopes that the situation in Tunisia might stabilise were dealt a blow on 18 January when thousands of people across the country demonstrated against the interim government in which followers of ousted President Ben Ali held on to key positions

​​ The opposition cuts a disparate figure overall. The relationship to the "old" state leadership was highly ambivalent, particularly in the case of opposition parties. Ideas on the future of the nation are, therefore, likely to be very different, particularly if those involved are expected to make compromises, and if this overhaul of old structures is going to include the former governing party, a force that now needs to undergo fundamental reform itself.

It would appear that all of this has to be achieved by the interim president together with the government of national unity.

It is too soon to be able to gauge just how much influence the various opposition forces will have in shaping Tunisia's future. The protests continue, and the demands of the disaffected are bold, seeking to strip all RCD members of their powers or to have the party abolished altogether. Other voices call for a compromise solution.

There are no prospects for a consensus at present. A rapid transition to a post-Ben Ali era is not on the cards. This will inevitably have negative repercussions on the country's economy and, more specifically, its tourism sector and position as an industrial centre.

The political scientist Dr Sigrid Faath is Associate Fellow at the German Council on Foreign Relations in Berlin. Her specialist areas include, among others, the domestic and foreign policy of the Maghreb countries and the Euro-Mediterranean Partnership.

Tunisia's Opposition Movement
Stumbling Blocks on the Road to Democracy
The opposition is clearly relieved about the overthrow of the dictator Ben Ali. Yet the movement needs time to reconstitute and prepare for elections. Alfred Hackensberger reports from Tunis.

END_OF_DOCUMENT_TOKEN_TO_BE_REPLACED
Social media
and networks
Subscribe to our
newsletter