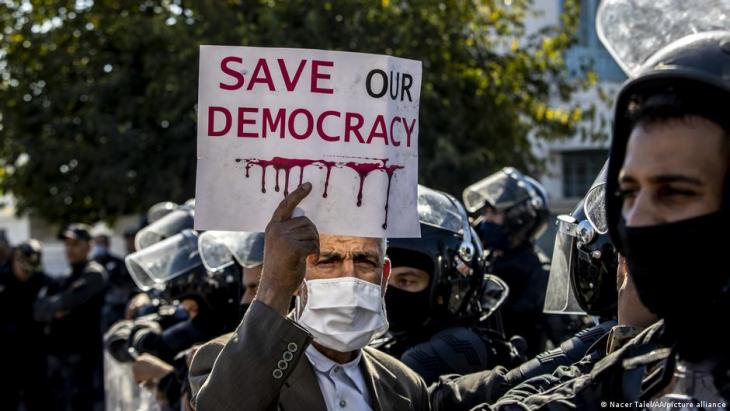 Tunisia's first-ever digital survey on a new constitution is key to Tunisian President Kais Saied's path out of a political crisis. But as with Saied himself, reactions to the online innovation have been mixed. By Cathrin Schaer and Tarak Guizani

Since 15 January Tunisians have been participating in the country's first-ever online referendum on their political future.

To express their opinions on six topics, including education, culture, elections and the economy, locals register on a special website called E-Istichara, or e-consultation, with their national identity number. They then receive an access code on their mobile phones and can take part in the survey. The online referendum, which began with a test phase in early January and is scheduled to run until March, is part of what Tunisian President Kais Saied has described as a roadmap towards constitutional change.

Last July, Saied froze the country's parliament, dismissed the sitting prime minister and granted himself emergency powers. He said he had been forced to take control of the executive himself because of ongoing political stagnation and corruption, a decade after the revolution that saw Tunisian dictator, Zine el-Abidine Ben Ali, flee the country.

The power grab divided the country. Saied's supporters say what he did was necessary to put an end to the political gridlock and economic impasse. Saied's critics described his actions as a "constitutional coup", arguing that he is a potential dictator, endangering Tunisia's nascent democracy.

As a result, "many people in Tunisia and abroad have called on [Saied] to produce a road map to return the country to democratic accountability," Anthony Dworkin, a senior policy fellow at the European Council on Foreign Relations, or ECFR, wrote this week. 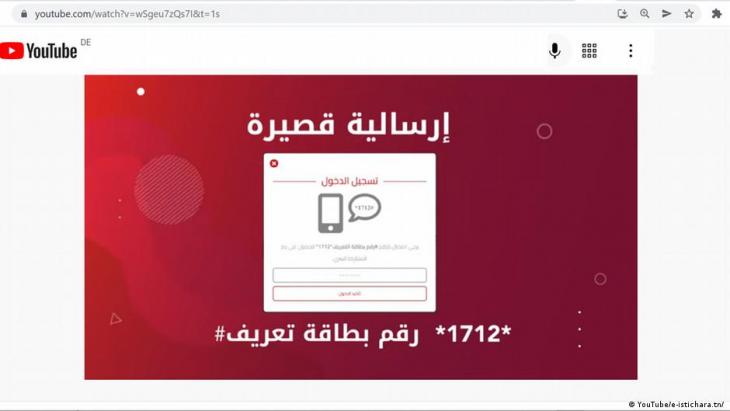 "Your opinion, our decision": while the slogan itself can be interpreted a number of ways, "the problem is not in accepting or refusing online opinions," explains communications technology engineer Rahma al-Habbasi. It's the technical obstacles relating to Internet coverage and levels of education that are problematic. Only around 66 percent of Tunisians have regular Internet access. Moreover, according to the latest official figures, 18% of the population – or 2 million Tunisians – are illiterate. As a result the digital survey will be anything but inclusive, critics argue

Saied's roadmap, announced last month, includes a constitutional referendum to be held in July 2022. Tunisians are to vote on a new draft constitution for Tunisia prepared by Saied and an expert committee he has selected. The draft will take into account the results of the online survey. An election is planned for the end of the year, with rules based on whatever electoral system the new constitution favours.

The idea of the online poll has divided Tunisian opinion just as Saied's other plans for the country have. Even the website's slogan – "your opinion, our decision" – could be seen as open to interpretation, locals said. Saied has already said he wants a presidential-style system, with direct democracy at the regional level, rather than a national parliament.

"It is a smart initiative," said Akram al-Shahed, an employee at a bank in the capital, Tunis. "He wants to treat everyone equally and does not privilege parties or elites. Regardless of the President's political inclinations, we live in a digital world and everyone should adapt to that."

"The problem is not in accepting or refusing online opinions," Rahma al-Habbasi, an engineer working in communications technology in Tunis, pointed out. "There are possible technical obstacles," he explained, noting differences in Internet coverage and education. Only around 66 percent of Tunisians have regular Internet access. Earlier this month, Tunisia's Ministry of Social Affairs announced that almost 18% of the population – or 2 million Tunisians – are illiterate. All of this means that the consultation process cannot be truly inclusive, critics argue.

Additionally, IWatch, a corruption monitoring organisation and Transparency International's Tunisian partner, condemned the lack of transparency on the website. Nobody knew who made it, how safe personal data was, or who came up with the questions in the referendum, the organisation wrote. "We believe the questions … will be an attempt by whoever prepared them to direct the will of the people in advance and limit their right to self-determination," IWatch said in a statement. 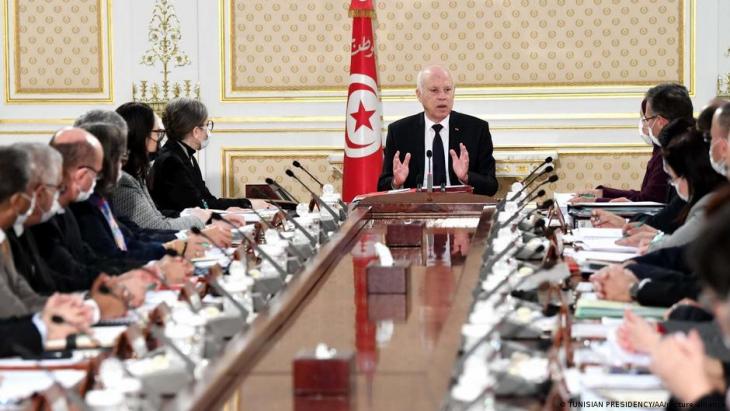 IWatch, a corruption monitoring organisation and Transparency International's Tunisian partner, has condemned the lack of transparency on the website. Nobody knew who made it, how safe personal data was, or who came up with the questions in the referendum, the organisation wrote. "We believe the questions … will be an attempt by whoever prepared them to direct the will of the people in advance and limit their right to self-determination"

Senior members of the Afek Tounes party and the Ennahda movement, which had the most seats in Tunisia's parliament until Saied's one-man mission to rebuild the country's political system began, also criticised the online consultation.

On his Facebook page, one of Saied's most vociferous critics, Moncef Marzouki, interim president of Tunisia straight after the revolution between 2011 and 2014, told readers to "ignore them and their idiotic consultation". Marzouki warned that the website was a fraud and would later be used to identify Tunisians who didn't agree with Saied.

Marzouki himself was sentenced to four years in prison, in absentia, on 22 December for "undermining external state security". The 76-year-old, who is known as a human rights activist, lives in Paris and said that his sentence was "political" because of his outspoken criticism of Saied's recent actions.

Last Wednesday, Marzouki became one of 19 Tunisians accused of electoral violations dating back to 2019. Others in the group include four former prime ministers and the heads of political parties. 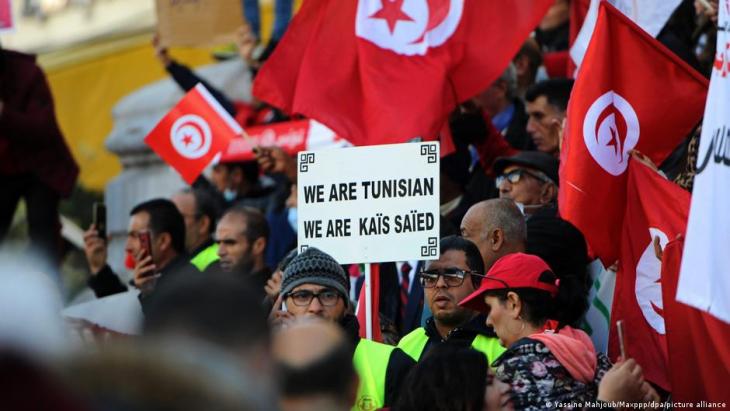 Tunisia divided: large parts of the population, not to mention political parties, however, support Saied's year-long road map. Tunisia's Ba'ath party said it reflected "a clear and solid will for reform" and the left-wing Popular Front greeted it as an effort to remove corrupt Islamist politicians from power. "It is a smart initiative," says Akram al-Shahed, a bank employee in Tunis. "He wants to treat everyone equally and does not privilege parties or elites. Regardless of the President's political inclinations, we live in a digital world and everyone should adapt to that"

But there are also large parts of the population and political parties that support Saied's year-long road map. Tunisia's Ba'ath party said it reflected "a clear and solid will for reform" and the left-wing Popular Front greeted it as an effort to remove corrupt Islamist politicians from power.

When Saied first shut down parliament, many ordinary Tunisians cheered him on. Nine governments over the past ten years hadn't resolved their dire economic situation and polling suggested that a majority thought the country was headed in the wrong direction, well before Saied took over.

However since then, increasingly autocratic behaviour from the President – such as using the judiciary to silence opponents like Marzouki – has been causing more concern.

"What he has been doing has raised a greater degree of scepticism," the ECFR's Dworkin explained. "Since his power grab in July, a number of voices that were originally somewhat sympathetic have become quite opposed [to Saied]. It's become clear he really does intend to try and take the country in the direction of more centralised power."

That's why the digital consultation has also divided opinions. "At a basic level, it's better than people having no voice at all," admitted Dworkin. "But it really looks like a bit of a fig leaf, a gesture towards the idea of consultation without any real substance."

It's important to look at the broader context within which all this is happening, he continued. "And there's remarkably little transparency about how this process [the road map] is going to work. There's no formal involvement of any other political groups or civil society. And it is all taking place under a political system in which all the political power is currently concentrated in Saied's hands."

Sultana Khaya, 41, has been peacefully resisting the Moroccan occupation of Western Sahara for many years. Because of her campaign to assert the self-determination of the Sahrawi ... END_OF_DOCUMENT_TOKEN_TO_BE_REPLACED

Back in 1995, when The Times asserted Islam was to blame for the poor levels of education among women in the Muslim world, Mohammad Akram Nadwi began scouring ancient Arabic ... END_OF_DOCUMENT_TOKEN_TO_BE_REPLACED

Since Spain abandoned its traditional neutrality towards the conflict in Western Sahara, Morocco has announced a "new phase" in relations between the two countries. But what is ... END_OF_DOCUMENT_TOKEN_TO_BE_REPLACED

Tunisia's president has been carrying out a coup by degrees, demolishing the country's hard-fought democratic gains bit by bit. With an economy in turmoil and a splintered ... END_OF_DOCUMENT_TOKEN_TO_BE_REPLACED

The German government is planning to legalise cannabis before the end of this legislative period. So what does Islam have to say about its consumption? Will changing the law alter ... END_OF_DOCUMENT_TOKEN_TO_BE_REPLACED

An increasing number of government ministries in Algeria are announcing they will abandon French in future. They may be reacting to the mood among the population, but the move is ... END_OF_DOCUMENT_TOKEN_TO_BE_REPLACED
Author:
Cathrin Schaer & Tarak Guizani
Date:
Mail:
Send via mail

END_OF_DOCUMENT_TOKEN_TO_BE_REPLACED
Social media
and networks
Subscribe to our
newsletter