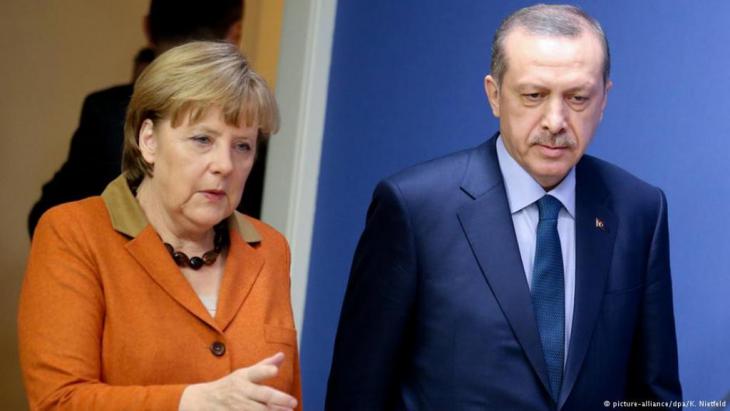 Germany is facing a crucial question. How can the refugees be stopped? Demonstrating an alarming lack of historical awareness, Chancellor Angela Merkel is putting all her faith in an alliance with Turkey. Yet as events of the early 20th century clearly showed, Germany should never make its political destiny dependent on co-operation with the nationalistic Turkish state. An essay by Stefan Buchen

"Our only goal is to keep Turkey on our side until the end of the war, even if the Armenians perish in the process." With these words, Germany′s Imperial Chancellor Theobald von Bethmann Hollweg swept aside internal misgivings over the alliance with Turkey at the outbreak of the First World War.

In early 1915, the genocide against Armenians in Istanbul and the cities of Asia Minor was in full swing. German military leaders and diplomats were direct witnesses and, in many cases, supporters: take, for example, Germany′s vice-consul in Erzurum, Max von Scheubner-Richter, who joined the Nazis after World War One.

The Germans watched as thousands were murdered and driven to death by starvation. The German envoys – most of them members of the Prussian elite – were perfectly aware that this was unjust.

But the horrors were of secondary importance. They could even be justified.  Common views held by the German diplomats were that the Armenians were "enemies of the state", "leeches" and "worse than the Jews".  This stance aligned them with the ideas of the "Young Turk Movement", which scapegoated the Armenians for the decline of the Ottoman Empire and earmarked them for extermination.

Alliance at any price

It was crucial for Germany that the war alliance with Turkey held fast. The possibility that the Armenians might perish as a consequence was to be accepted, even endorsed, as a quasi-natural side effect of the nationalistic upsurge in Turkey. The mass murder was normal and a logical consequence.

The equally nationalistically-minded German strategists understood very well the ideas of the Young Turks – that the Armenians with their historic settlement areas around Mount Ararat and in the Caucasus were an obstacle to a coherent "pure Turkish" territory extending from Asia Minor to Central Asia and that they were therefore to be wiped out.

The Germans were meanwhile hoping that their prospects of success in the conflict would not only be improved by the Turks' nationalism, but also by their religion. That the German Emperor William goaded the Ottoman Sultan Mehmet to declare a worldwide jihad in 1914 is an undeniable fact of history.

The idea was that Muslims in India, North Africa and the Caucasus would rise up under the banner of the jihad against English, French and Russian colonial rulers thereby dealing Germany's war opponents "a deathly blow".

The German diplomat and Orient explorer Max von Oppenheim was the one to have whispered this idea in the Emperor's ear. As we now know, the hoped-for great uprising against the colonial powers did not come to pass. But in Asia Minor, religious hatred fuelled nationalistic hatred. In the genocide of Christian Armenians, Turks and Kurds worked together. If the term "Islamofascism" was ever a fitting description of anything, then of the murderous movement of those sinister days.

Why are these associations of relevance now?

100 years ago, Germany perceived itself to be locked in a crucial struggle with its European rivals. "Turkey", as the decimated Ottoman Empire was already being called at the time – totally in keeping with the nationalistic Zeitgeist – was, along with Habsburg, its only ally. Germany pinned lofty expectations on this alliance. These were not met. The price paid in terms of morals and human rights on the other hand was incalculably high. More than one million Armenians were killed or driven to their deaths. 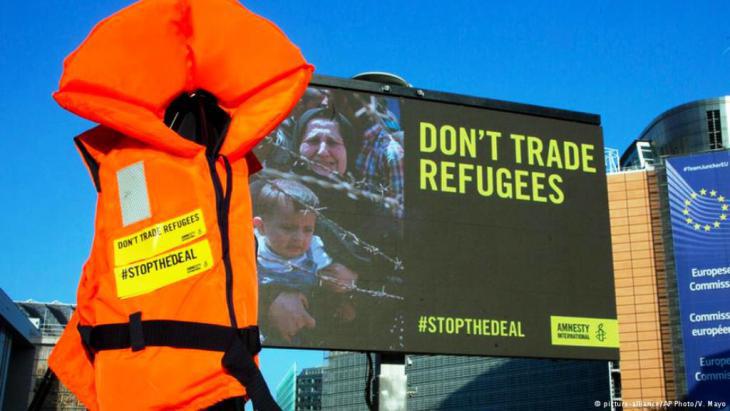 "Dangerous, illegal and inhuman": human rights organisations continue to reject the EU′s deal with Turkey. They dismiss any changes to the recommendations as merely cosmetic and oppose the idea of recognising Turkey as a safe third country

The Turkish state, with which Germany has today struck a deal in the refugee crisis – which has itself been highly stylised into a crucial existential question – is still exactly the same one created by the Young Turks back then. It is based on the concept of nationalism. Its guardians define the "honour of the Turkish nation". Anyone who violates this honour is punishable by law.

And of course, never having committed a genocide is part of the honour of the Turkish nation. That the Islamo-nationalist Erdogan stands at the helm of the Turkish state draws an obvious parallel with an era 100 years in the past. The irony should actually be painful. But it clearly isn't, at least not to anyone in Federal German government circles.

Turkey is yet again being required to serve a purpose for Germany. It is required to keep refugees away from Europe and above all from German territory. The success of this plan and the hoped-for attainment of the war goals of 1914 – both equally questionable. The only certainty is that Germany is again willing to pay an enormous moral price.

Refugees are deviating to the more dangerous routes via the central Mediterranean and are drowning in their hundreds. The Turkish state is waging war on the only remaining, significantly numbered non-Turkish group on its territory: the Kurds. The victims already number in their thousands.

In the Syrian war, Turkey supported the most radical groups and tolerates them to this day as a counterweight to the PKK and Assad. Syrian refugees are being turned back at the border by Turkish security forces. There are also instances of deportations back into the war zone.

The harrassment of parliamentarians and media representatives makes a complete mockery of the self-styled "modern Turkey". The Kemalist claim to a "modern, European" Turkey – in the sense of freedoms and human rights – was however hollow right from the outset.

Since the burning down of the "European" sector of Smyrna (Izmir) in the year 1922, which resulted in the deaths of several thousand remaining Armenians and tens of thousands of Greeks, the state of Ataturk was in the proper sense no longer able to raise this claim. The fact that in reality it was however able to do so, was initially associated with the logic of the Cold War and, after 1979, with Western fears concerning the rise of "mediaeval Islam" in other nations of the Orient.

A few black and white film clips exist from the year 1922, showing desperate Armenians and Greeks trying to flee burning Smyrna in small, rickety wooden boats. The footage was filmed from European warships patrolling the Turkish Aegean coastline. It was not a priority for the Europeans to save those doomed to die.

German politicians – and the Chancellor in particular – like to act as though Germans should only learn "historical lessons" from the era of the Third Reich. This is a grave error.

Fatally erroneous political decisions and developments that are highly relevant to the present day were being made earlier, at the start of the 20th century. The defensive reflex, "What else should we be held responsible for?" is not helpful. In the early 20th century, the Germans were already regarding genocide as somewhat more normal than other Europeans.

This does not mean that Germany should not co-operate with contemporary Turkey. But anyone who banks everything on the alliance with this nationalistic state for the sake of their own salvation from the dangers of the present, has not learned their lesson.

Stefan Buchen works as a television journalist for the ARD magazine Panorama.

Home
Print
Newsletter
More on this topic
EU-Turkey deal: The alternative is IdomeniEurope′s response to the refugee crisis: "Ugly, feckless and dysfunctional"Refugee crisis in Europe: The price of European indifference
Related Topics
Armenians, History of the Near and Middle East, Young Turks, Kemalism, Policy on refugees and migration, Recep Tayyip Erdogan, Refugees, Syrian Civil War, Turkey and the EU
All Topics

In Doha, Arabs from Morocco, Tunisia, Egypt and Algeria are gathering to celebrate the first ever FIFA World Cup to be held on Arab soil. The criticism from Europe? Over the top, ... END_OF_DOCUMENT_TOKEN_TO_BE_REPLACED

Canan Topcu came from Turkey to Germany as a child. In her essay, she describes how bothered she was by the racism she encountered in her country of origin when she travelled ... END_OF_DOCUMENT_TOKEN_TO_BE_REPLACED

All organisers use major sporting events like this year’s FIFA World Cup in Qatar primarily to advertise their country and promote a slick public image. This is not something we ... END_OF_DOCUMENT_TOKEN_TO_BE_REPLACED

Lamya Kaddor, MP for Germany’s Green Party, visited Qatar with a group of parliamentarians. In interview with Claudia Mende, she advocates a differentiated picture and urges that ... END_OF_DOCUMENT_TOKEN_TO_BE_REPLACED

COP27 in Sharm el-Sheikh is turning into a PR disaster for Egypt’s military regime. Instead of praise for the host, the news is full of solidarity for imprisoned activist Alaa ... END_OF_DOCUMENT_TOKEN_TO_BE_REPLACED
Author:
Stefan Buchen
Date:
Mail:
Send via mail

END_OF_DOCUMENT_TOKEN_TO_BE_REPLACED
Social media
and networks
Subscribe to our
newsletter