There are approximately 4 million refugees in Turkey, and they are increasingly the objects of hostility - as recent riots in Ankara have shown. Experts warn that the situation is likely to escalate in future

It all began on Tuesday evening (10.08.2021) when a street fight erupted between two groups of youths in Altindag, a district of the Turkish capital, Ankara. In the violent confrontation between some Syrian migrants and a group of Turkish locals, two Turks were stabbed. A few hours later, one of them, 18-year-old Emirhan Yalcin, died in hospital.

The event sparked a wave of xenophobia that resembled a pogrom. On Thursday night, hundreds of people poured onto the streets of Altindag. There, they vandalised and ransacked stores, homes and cars belonging to Syrian immigrants.

These ugly scenes could be followed live on Twitter: Numerous videos were posted on the social network showing the angry mob vandalising Syrian property and shouting xenophobic slogans. Some of the rioters make the so-called "wolf salute" with their hands, the symbol of Turkey's right-wing extremist movement "UIlkucu", also known as the "Grey Wolves".

For a long time, the Turkish government and population were tolerant of the millions of refugees and migrants in their country. In the past few years, though, the mood has changed. One of the main reasons for the increase in hostility toward migrants is that Turkey has been trapped in a prolonged economic and monetary crisis since the fall of 2018. This difficult situation has amplified existential fears in Turkish society and struggles over the distribution of wealth.

The xenophobic riots in Ankara came as no surprise to sociologist Ulas Sunata. She says they cannot be attributed solely to the bad economic situation. "Tensions between refugees and locals were never properly defused," she explains. "There have been a lot of mistakes in immigration policy. It was non-transparent and poorly communicated." 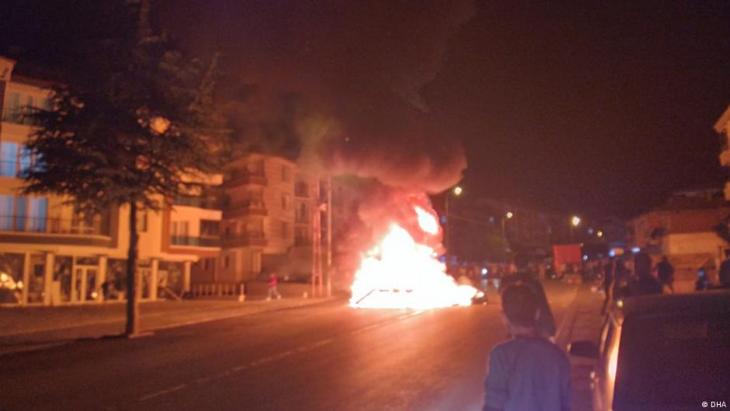 An anti-Syrian mob rages in Ankara: violence against Syrian refugees escalated after an 18-year-old Turk was killed by a Syrian man's knife wounds during a dispute between two rival groups in the neighbourhood. But the young man's death was merely the straw that broke the camel's back

Sunata anticipates worse hostilities to come, warning that politicians who kept emphasising that immigrants would soon be sent back have encouraged this response. Metin Corabatir, the president of the Research Centre for Asylum and Immigration (IGAM), also holds politicians and their harsh rhetoric partly responsible. He, too, points out that many have repeatedly stressed their intention to send the refugees back soon. "They already have an eye on the 2023 elections," he explains.

He is referring primarily to the largest opposition party, the CHP, which recently ratcheted its anti-refugee rhetoric up a notch. CHP leader Kemal Kilicdaroglu declared that if his party came to power, he would send all refugees back to their countries of origin.

There are an estimated 3.6 million Syrian refugees and migrants in Turkey, as well as refugees from Afghanistan, many of whom fled the radical Islamist Taliban militia. Hundreds of thousands are living in Turkey illegally, earn little and cannot access the health care system.

Since the recent withdrawal of NATO troops from Afghanistan, the Taliban have managed to retake large parts of the country from the central government. Many Turks now fear that Turkey must expect a fresh wave of immigration. In addition, the Turkish government has been offering its services to the United States as a force to protect the civilian Afghan population. For example, President Erdogan plans to deploy Turkish soldiers to secure Kabul's Hamid Karzai Airport.

Washington, it seems, is happy to accept this offer. Last week, the U.S. State Department announced a Refugee Action Plan for those Afghans who have cooperated with Washington and may therefore be persecuted by the Taliban. The programme envisages temporary resettlement for them in Turkey.

This does beg the question of how much safer it will be for Afghan refugees there, given the intensity of the xenophobia that flared up in Ankara on Thursday.

Millions in Idlib depend on aid coming through a northern border crossing. On 10 July, the UN Security Council votes whether to keep it open. The decision may hinge not only on ... END_OF_DOCUMENT_TOKEN_TO_BE_REPLACED

Bachtyar Ali sends the hero of his latest novel – "Mein Onkel den der Wind mitnahm" – literally flying. Jamshid is so thin after his years as a political prisoner that a gust of ... END_OF_DOCUMENT_TOKEN_TO_BE_REPLACED

For a century, the Kurds and other minorities in Turkey have been subject to state repression. With his dissertation "The Kurdish Question in Turkey", political analyst Ismail ... END_OF_DOCUMENT_TOKEN_TO_BE_REPLACED

Despite what heads of state may claim, the Russian attack on Ukraine is not a wake-up call for a self-confident Europe that defends its values. The war is accelerating the decline ... END_OF_DOCUMENT_TOKEN_TO_BE_REPLACED

At the EU's outer borders, the right of migrants to a fair asylum procedure continues to be systematically disregarded. Take Greece, for example: in the worst case scenario, those ... END_OF_DOCUMENT_TOKEN_TO_BE_REPLACED
Author:
Daniel Derya Bellut
Date:
Mail:
Send via mail

END_OF_DOCUMENT_TOKEN_TO_BE_REPLACED
Social media
and networks
Subscribe to our
newsletter