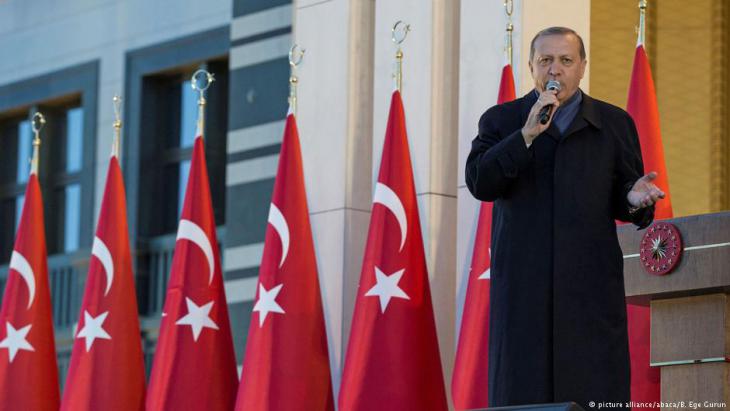 Turkey post-referendum
Reconciliation – not a chance!

The referendum campaign has polarised Turkey in a way rarely seen, but instead of seeking balance and reconciliation, Erdogan immediately announced further referenda on the death penalty and EU accession talks. A risky tactic, argues Ulrich von Schwerin

The day after his victory, Recep Tayyip Erdogan undertook a little pilgrimage in Istanbul to the mausoleum of Eyup and the tomb of Yavuz Sultan Selim – known in English as "The Grim". But above all, the Turkish President paid his respects to his late mentor Necmettin Erbakan and the former prime ministers Turgut Ozal und Adnan Menderes. Only then, did Erdogan return in triumph to Ankara to the cheers of his supporters.

With the transition to the presidential system, Erdogan promised, the era of a "new Turkey" would begin. His visit to the graves of Menderes, Ozal and Erbakan can be understood as a nod to three heads of state who had themselves promoted a reform of the secular state order that Mustafa Kemal Ataturk bestowed on Turkey.

As a result, his mentor Erbakan was forced by the military to stand down in 1997, Menderes was executed in 1961, while Ozal died 24 years ago in suspicious circumstances. Erdogan on the other hand has not only managed to survive a coup attempt by the military, but also to enforce a tailor-made presidential system against the resistance of the old elite.

With the acceptance of the presidential system in the referendum of 16 April, the 63-year-old has realised his goals. But Erdogan's fiercely-fought campaign has polarised society. And although he has been canvassing in favour of the reform for weeks, not only was the resulting win very narrow at 51.4 percent, suspicions of manipulation remain.

A look at the electoral map shows Turkey's clear divide: while the conservative heartland of Anatolia and the Black Sea coast mainly voted in favour of the presidential system, the "No" vote dominated in Aegean coastal regions, as well as the Kurdish southeast. The five largest cities Istanbul, Ankara, Izmir, Antalya and Adana also voted "hayir" (no). 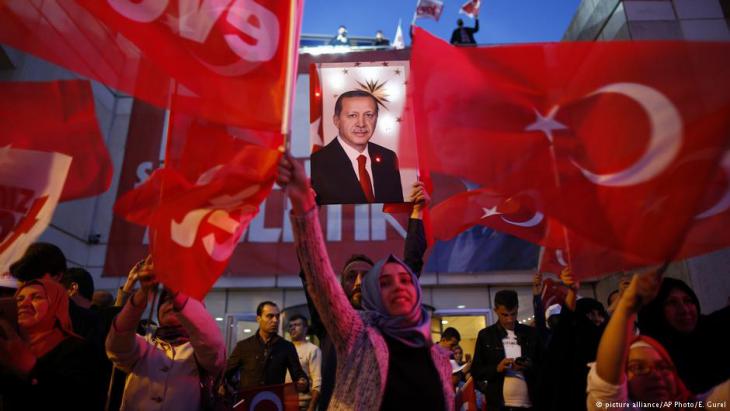 Strong man personality cult: "while Erdogan is greatly revered, he is also hugely divisive. Not only in Europe, Erdogan is also a hated figure among many Turks. This made it seem all the more important to seek a reconciliation within society, particularly as the campaign in which Erdogan defamed No-voters as supporters of terrorism and insulted his EU partners by calling them Nazis, has further deepened the chasm," writes Ulrich von Schwerin

Here again we find the old split between "black Turks" and "white Turks" – those western-oriented, secular, urban middle and upper classes that have dominated politics, culture and the economy for decades. Only Erdogan has managed to undermine their supremacy and give conservative Muslims recognition and a place in the public domain.

For his supporters, Erdogan is still the boy from the Istanbul working class neighbourhood of Kasimpasa, despite the fact he now lives in a magnificent palace. They still see the politician, who carefully cultivates an image of a man of the people, as one of them. He is the proof and the promise that with enough willpower and ambition, anyone can make it from simit seller to president.

At the same time, he meets the need for a strong leader – something that is not unique to Turkey, but that appears especially pronounced here. This yearning is reflected in the personality cult surrounding the "Reis" or "Chief", which only finds a correlation in the idolisation of Ataturk – and probably also has its roots there, just as Erdoganism bears a strong resemblance to Kemalism.

Erdogan – love him or hate him

But while Erdogan is greatly revered, he is also hugely divisive. Not only in Europe, Erdogan is also a hated figure among many Turks. This made it seem all the more important to seek a reconciliation within society, particularly as the campaign in which Erdogan defamed No-voters as supporters of terrorism and insulted his EU partners by calling them Nazis, has further deepened the chasm.

Ahead of the referendum, several commentators expressed the hope that Erdogan would extend his hand to his opponents, as soon as his goal was attained. Others even saw indications that he could again approach the Kurds, after his alliance with the nationalists did not pay off, when a large section of the party grassroots refused to approve the presidential system.

But Erdogan's initial utterances do not indicate that he is seeking reconciliation – on the contrary: his victory had barely been confirmed before he started pushing for the reintroduction of the death penalty. Should he not receive a majority for this in parliament, he could hold a second referendum on the issue, he announced at an evening appearance in Istanbul in front of a jubilant crowd.

In Erdogan's perception of democracy, a majority gives the winner the right to govern at will – even if that majority is slim. Respect for the wishes of the minority is not on his radar. Coalitions are just as abhorrent to him as the search for consensus and compromise. 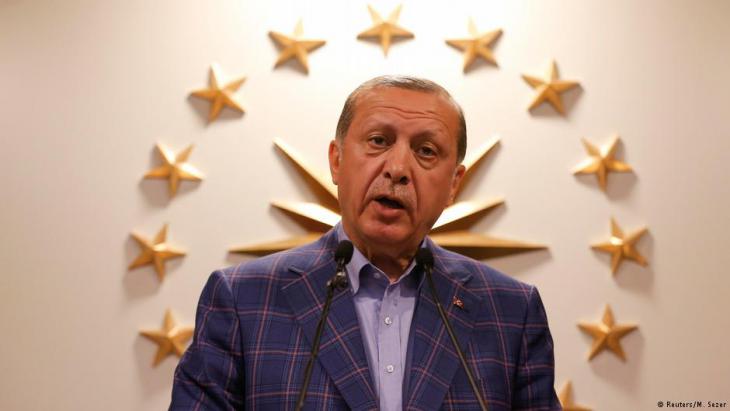 On a collision course with the EU: following his referendum victory last Sunday, the Turkish President Recep Tayyip Erdogan immediately started pushing for the reintroduction of the death penalty. During his victory speech in front of jubilant supporters in Istanbul, he announced that it could form the focus of a second referendum. Erdogan himself was once responsible for abolishing Turkey′s death penalty – a reintroduction would mean an end to EU accession negotiations

Following the havoc of the last campaign, it doesn't bear thinking about what a debate over the reintroduction of the gallows would cause in Turkey. The EU has left Ankara in no doubt that a reinstatement of the death penalty would be a clear rejection of European values and would spell an immediate end to the EU accession process.

Economically speaking, Turkey is exceedingly dependent on Europe, which is the country's most important trading partner. It also receives billions of euros in aid from Brussels as part of the accession process. Large areas of the country live from tourism. Turkey, which only recently narrowly avoided plunging into financial crisis, cannot afford to turn its back on Europe.

But Erdogan does not appear to care about that: addressing a flag-waving crowd on the steps of the presidential palace after returning to Ankara, he also raised the prospect of a referendum on the EU membership process. He had already announced before the referendum that relations with Europe would be up for debate, but this seemed like nothing more than an electoral manoeuvre.

Now though it seems that Erdogan can't switch out of election mode. No doubt Erdogan, like no other in Turkey, knows how to mobilise the masses. When he paces the stage with a microphone in his hand and elicits a roar from the crowd with just a few words, before silencing it with a gesture, he is totally in his element.

During the campaign, bogeymen, polemics and polarisation have repeatedly turned out to be useful for him in the mobilisation of voters – recently in the row over Turkish ministers canvassing in Europe. He appears not to see that the damage done by this spat was barely worth the few thousand votes he had been chasing, as well as that in the long-term, he won't be able to win an election if European investors and tourists persist in keeping their distance.

Sufis today are under attack from fundamentalists and modernists alike. At the same time, a new form of Sufism is emerging in the West. By Marian Brehmer END_OF_DOCUMENT_TOKEN_TO_BE_REPLACED

The devaluation of the Egyptian pound combined with rising food prices is taking its toll on Egypt. More and more people are slipping into poverty. Karim El-Gawhary reports from ... END_OF_DOCUMENT_TOKEN_TO_BE_REPLACED

Since returning to power in Afghanistan, the Taliban have steadily eroded the rights and opportunities of women and girls, particularly their access to education. But Afghans are ... END_OF_DOCUMENT_TOKEN_TO_BE_REPLACED

The book "The Invention of the Maghreb: between Africa and the Middle East" prompts us to review basic terminology. This includes terms that we use almost every day as if they are ... END_OF_DOCUMENT_TOKEN_TO_BE_REPLACED

Tunisia has been going through a severe economic and political crisis in recent years. More than one in three young people there are unemployed. For many skilled, qualified and ... END_OF_DOCUMENT_TOKEN_TO_BE_REPLACED

At the end of every year, the team at Qantara.de gives you a run-down of the ten most-read articles on the site over the past 12 months. Here is a quick overview of the stories ... END_OF_DOCUMENT_TOKEN_TO_BE_REPLACED
Author:
Ulrich von Schwerin
Date:
Mail:
Send via mail

END_OF_DOCUMENT_TOKEN_TO_BE_REPLACED
Social media
and networks
Subscribe to our
newsletter