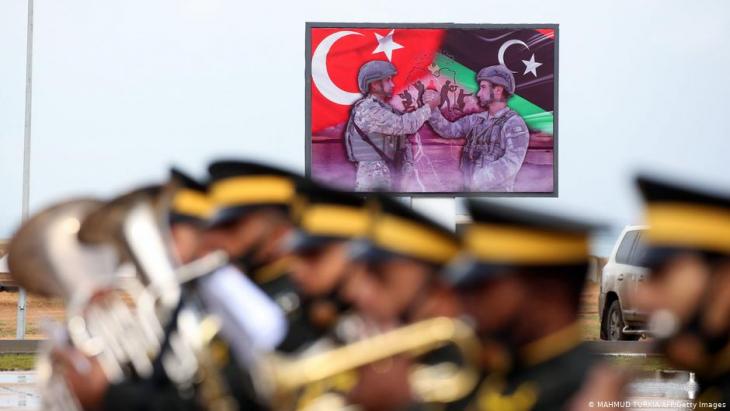 Photos
Turkey seeks its role in the Middle East

Turkey is largely isolated in the Middle East. Partners are few and far between. Its closest ally, Qatar, has just made peace with its neighbours. Together with the change of power in the USA, this is forcing Ankara to rethink. Background by Kersten Knipp

"A good omen for the stability of the entire region": this is how German Foreign Minister Heiko Maas described the outcome of the talks with his Turkish counterpart Mevlut Cavusoglu in Ankara on Monday. Cavusoglu also expressed his satisfaction. The talks took place in a "positive atmosphere", he said.

The talks centred on the conflict over gas deposits in the eastern Mediterranean. Since their discovery, EU members Greece and Cyprus have been at loggerheads with Turkey over their exploitation. Both sides lay claim to the maritime areas. The dispute almost escalated into military confrontation last year.

In addition to the plight of the Turkish economy, the change of power in Washington may also have contributed to the latest development. According to Hurcan Asli Aksoy, deputy director of the Centre for Applied Turkey Studies (CATS) at the Berlin-based Stiftung Wissenschaft und Politik, "the incoming Biden administration will work more closely with the EU again, and Erdogan wants to be on the right side of this rapprochement".

It is likely this thought has also prompted the government in Ankara to rethink its previous policy in the Middle East. These days Turkey is more isolated than ever in large parts of the Middle East, says Aksoy, referring to the conflicts in the Eastern Mediterranean, the South Caucasus, Syria and Libya. "Turkey needs its allies again to maintain what Erdogan presents to the Turkish population as geostrategic and geoeconomic successes. So domestic factors are also at play in the current change of course."

From Turkey's point of view, important changes have recently taken place in the Gulf. At the beginning of the year, Saudi Arabia and its partners – the United Arab Emirates (UAE), Bahrain and Egypt – reached out once again to Qatar, Ankara's closest partner in the region.

This followed a boycott of Qatar by Saudi Arabia and its partners that lasted about three and a half years. As a result, Turkey, which had supported Qatar with food supplies during the boycott, must now reorganise its relations with both sides. The process harbours both opportunities and risks.

In principle, the government in Ankara welcomes the reconciliation in the Gulf. "It is hoped that it will bring diplomatic advantages both Turkey and the Gulf states," says Aksoy. "The rapprochement between Qatar and Saudi Arabia can also help to put political relations between Turkey and Saudi Arabia, the UAE and possibly Egypt back on a better track and overcome their isolation. Qatar can play a mediating role in this."

Indeed, Qatar has already signalled its willingness to be part of such efforts. However, a sustainable rapprochement between Turkey and the Gulf states is likely to demand considerable compromises from both sides. The government in Ankara, for example, remains outraged by the murder of journalist Jamal al-Khashoggi in the Saudi embassy in Istanbul in October 2018, which was carried out by Saudi state agents.

Saudi Arabia and its partners, on the other hand, are angered by Turkey's and Qatar's close relations with the Muslim Brotherhood. With its religious social revolutionary agenda, the group is considered a terrorist organisation in Saudi Arabia, the UAE and Egypt. That is why Saudi Arabia is conducting an officially undeclared economic boycott against Turkey. Turkey, which has been badly hit economically, is seeking to reverse this boycott.

Actually the relationship between #Qatar and #Turkey is a lot more pragmatic and institutional than people make it out to be - the ideological component of that relationship has often been overstated - the relationship is win-win so far but has limits https://t.co/GzU7oaPR7n

Both sides must also move with respect to another country: war-torn Libya. There, Turkey supports the unity government of Fayez al-Sarraj. His government is also dependent on the votes of Islamist actors – including those of the Muslim Brotherhood. For this reason, too, Saudi Arabia and its allies stand by General Khalifa Haftar, whose troops are linked to the government-in-exile in Tobruk.

Should Turkey and Saudi Arabia now move towards each other, they will do so in a phase of foreign policy uncertainty. After all, it is not yet clear what course new U.S. President Joe Biden will take vis-a-vis Saudi Arabia. During the U.S. election campaign, he was extremely critical of the kingdom. How the relationship between the two former partners will evolve in future remains to be seen. 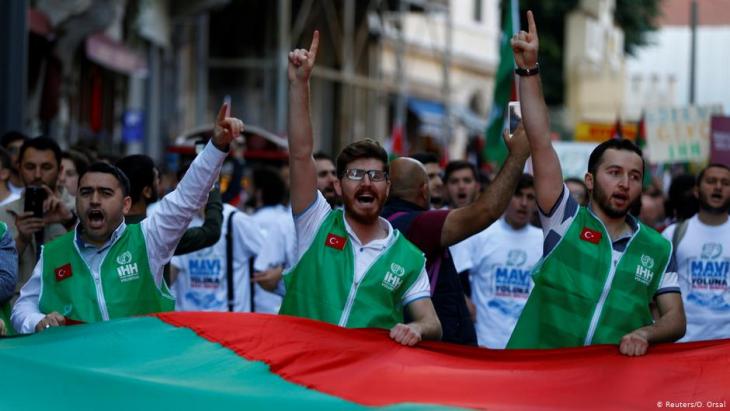 Striking a new note with Israel

After years of tense relations with Israel, Turkey is apparently also seeking better relations. In recent years, Erdogan has repeatedly distanced himself from Israel. When U.S. President Trump declared in December 2017 that the U.S. would recognise Jerusalem as the capital of Israel, Erdogan reacted sharply. "We will set the entire Islamic world in motion," he declared at a special summit of the Organisation of Islamic Cooperation in Istanbul.

Turkey expelled the Israeli ambassador in response to deadly clashes between Israeli forces and Palestinian demonstrators. In return, Israel asked the Turkish envoy to leave the country.

And in the summer, when there were signs that Israel and the UAE were normalising relations, Erdogan threatened to cut diplomatic ties with the UAE. When Morocco declared in mid-December last year that it wanted to recognise Israel as a state, Turkish Foreign Minister Cavusoglu then limited himself to the remark that the rapprochement should not be at the expense of the Palestinians.

Israel is still reacting cautiously to the Turkish signals of rapprochement. Political scientist Hay Eytan Cohen Janarcak of the Jerusalem Institute for Strategy and Security tells the political magazine Al-Monitor that there is a fundamental willingness to readjust relations between the two sides. For this to happen, however, three conditions would have to be met. "Israel wants the Turkish ambassador to return. Israel expects Turkey to stop supporting Hamas and for Erdogan to stop making hostile statements about Israel."

Gas resources in the Eastern Mediterranean – Detente between Greece and Turkey?

Libyan civil war: Turkey versus France – a game of one-upmanship in Libya?

No other Western poet was arguably so well-versed in the Koran or so fascinated by Islam as Germany's national hero, Goethe. In a new publication that examines all Goethe's ... END_OF_DOCUMENT_TOKEN_TO_BE_REPLACED

A deluge of books, movies, series and cover stories: ever since the events of 9/11, the West has seemed almost manically preoccupied with Islam. Yet this has rarely led to deeper ... END_OF_DOCUMENT_TOKEN_TO_BE_REPLACED

Twenty years after 9/11, the world is faced with the dual challenge of Islamophobia and anti-Westernism. Ahmet Kuru argues that Muslims in the West, well versed in both Western ... END_OF_DOCUMENT_TOKEN_TO_BE_REPLACED

Two decades after the attacks of 11 September 2001, the West faces the shattered debris of its failure – not only in Afghanistan, but also in Iraq, Syria, Libya and Yemen. What ... END_OF_DOCUMENT_TOKEN_TO_BE_REPLACED

Twenty years after 9/11, the United States is recalibrating its war policy. However, its assertions that the era of endless wars is over are a myth, writes Maha Hilal END_OF_DOCUMENT_TOKEN_TO_BE_REPLACED

Migrants are often maligned as being responsible for Europe's problems. Yet their integration is in Europe's interest. Michael Thaidigsmann believes that a long-term vision is ... END_OF_DOCUMENT_TOKEN_TO_BE_REPLACED
Author:
Kersten Knipp
Date:
Mail:
Send via mail

END_OF_DOCUMENT_TOKEN_TO_BE_REPLACED
Social media
and networks
Subscribe to our
newsletter