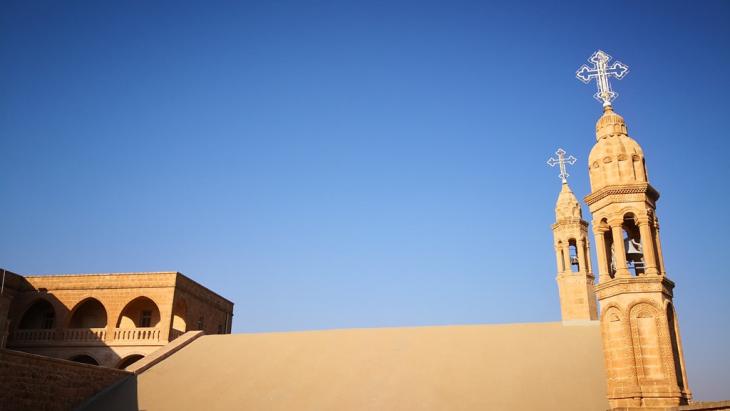 There are only a few thousand Aramean Christians left in south eastern Anatolia. And they are intent on preserving their ancient culture dating back one-and-a-half millennia. Marian Brehmer visits a community marked by exile, flight…and eventual return to the homeland

The ball flits through the air. It looks as though it might even sail over the church wall. The six young players beneath the bell tower with the metal cross give each other a few soccer tips. As their language echoes over the yard it sounds different to Turkish, it’s throaty like Arabic and sounds archaic, with a linguistic melody all its own. It’s a dialect of Aramaic, the language that Jesus is thought to have conversed in.

The evening sun has drenched the church yard in a mystical golden-yellow light. The caretaker bolts the heavy wooden door of the Kirklar Church, one of seven Syriac-Orthodox churches in the southern Turkish city of Mardin. Seven year-old Theodora is bored watching the soccer game. The first-grader has tied her soot-black hair into a ponytail; her mischievous grin reveals gaps in her teeth.

After a while, Theodora’s uncle Iliyo appears, the 22 year-old son of the parish priest. He puts his arm around his niece. "Theodora, speak German with the guest," he says in Aramaic. Theodora was born in Germany and lives with her parents and two siblings near Heilbronn. Now, in the summer holidays, she’s paying her first visit to the homeland of her ancestors, walking on the ground that Aramean Christians regard as sacred, in the heartland of the Syriac-Orthodox church.

Here, her grandparents were wont to work and pray. "It’s a bit hot, but the children are nice here," Theodora lets her guard down. She doesn’t understand any Turkish, but she can talk to her peers from the Kirklar parish in Aramaic. 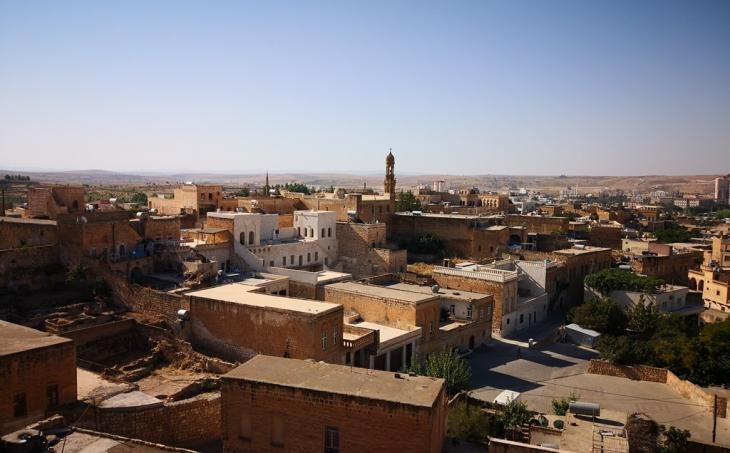 In the old district of Midyat, a town with 100,000 inhabitants, there are still as many church towers as there are mosque minarets. The city in south-eastern Turkey has been inhabited by Kurds, Arabs and Arameans for centuries

"My big sister, Theodora’s mother, left Turkey years ago. But we’re trying to keep the Aramaic culture here alive. We don’t want people to emigrate to Europe," explains Iliyo. "But of course we can’t prevent them doing it." Now, during the summer months, the Kirklar Church is offering courses in Aramaic, to help the descendants of early Christians improve their knowledge of the ancient liturgical language – both spoken and written.

Mesopotamia, the territory between the Euphrates and the Tigris in the tri-border zone between Turkey, Syria and Iraq has been the homeland of the Aramaic Christians for 700 years. The region, which includes the modern Turkish province of Mardin, is one of the oldest regions in the world to have been continuously populated by Christians. As representatives of a tradition that’s been unbroken since the beginnings of Christianity until the present day, churchgoers in the parish of Kirklar are living with a sense of responsibility.

One year ago the Taliban returned to power, seizing Kabul; the U.S. and its allies made a panicked exit from the country. Of all the books written on the subject, four stand out ... END_OF_DOCUMENT_TOKEN_TO_BE_REPLACED

In "Iran. Die Freiheit ist weiblich", journalist Golineh Atai describes the dogged resistance of courageous Iranian women against the Islamic Republic and the mullahs who have ... END_OF_DOCUMENT_TOKEN_TO_BE_REPLACED

Unflattering terms were used at a German Football Association human rights congress aimed at "intensifying the discussion" ahead of the World Cup. One speaker in particular made ... END_OF_DOCUMENT_TOKEN_TO_BE_REPLACED

Egyptian authorities have Mada Masr in their sights once again after critical reporting. But the editor of the country's last independent news source is adamant they will continue ... END_OF_DOCUMENT_TOKEN_TO_BE_REPLACED

Like Christianity, Europe's history is one of migration. Both have strong roots in the Orient and in cultures thousands of years old. Cultural historian Bernhard Braun invites us ... END_OF_DOCUMENT_TOKEN_TO_BE_REPLACED
Author:
Marian Brehmer
Date:
Mail:
Send via mail

END_OF_DOCUMENT_TOKEN_TO_BE_REPLACED
Social media
and networks
Subscribe to our
newsletter