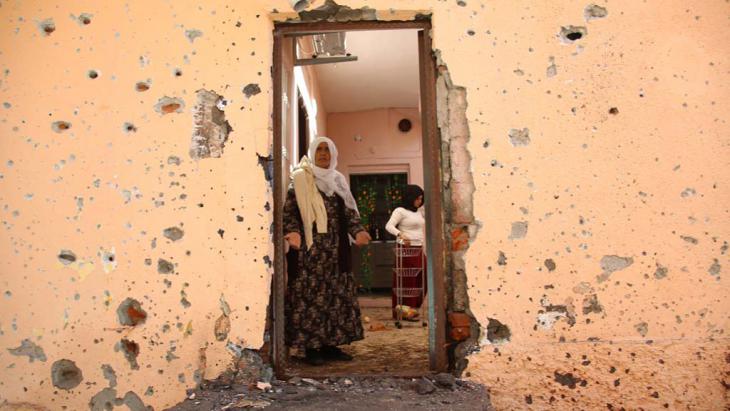 Turkey′s campaign against the PKK

Hundreds dead, whole districts reduced to rubble. That’s the outcome of Turkey′s military campaign in its south-east. For two months now, the predominantly Kurdish region has been under a curfew imposed by the Turkish army. Tom Stevenson reports from Diyarbakir

Thousands left Sur, the historic walled centre of Diyarbakir, on Wednesday clutching suitcases and the few possessions they could carry. On their way out residents filed past groups of Turkish soldiers and the armoured vehicles they will soon use to bulldoze their way through streets and homes alike in their fight against Kurdish militants holed up in the city.

The government says the operations, which it dubbed a "winter offensive" in November, are necessary to rout out militants linked to the banned Kurdistan Workers Party (PKK), which is fighting for an autonomous Kurdish region within Turkey and has been battling state forces in multiple Turkish provinces.

But for those who haven't already fled, electricity and water services are cut off and city officials and rights groups say the bodies of those killed – civilians and fighters alike – have lain in the streets for days because families are unable to recover the corpses or send them for burial.

Earlier this week, Turkey announced the area under curfew would be expanded to include much of Sur. "Sadly the government is pushing forward this conflict," said Raci Bilici, head of the Diyarbakir branch of Turkey's Human Rights Association (IHD). "Especially in Sur, many Kurdish people want self-governance because they feel they can't trust the state at this point, and the government and army are paying no heed to international law," Bilici explained at the organisation's office in the city.

In a report IHD presented in Diyarbakir on 27 January, the organisation documented 198 civilians killed during the curfews, as a result of fighting and the conditions, across the south-east, including 43 women and 33 children. Of those civilians, 40 were killed in Diyarbakir's Sur district. The central command of the Turkish army claims it has killed more than 500 "PKK terrorists" in Diyarbakir and Sirnak since 15 December. "The only solution is a ceasefire from both sides," Bilici said. 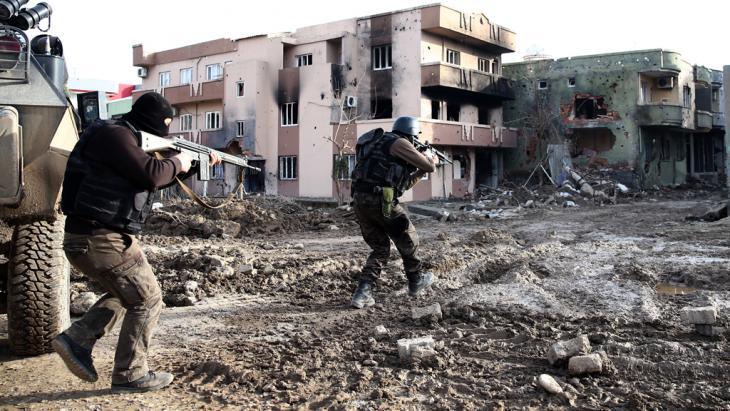 The Turkish army launched a major military offensive against the PKK in the south-east of the country in December. Troops are engaged in urban conflict with members of the PKK youth organisation YDG-H. Fighting is concentrated on the towns of Cizre, Silopi and the Sur district of Diyarbakir. The population has been under curfew since December

The Turkish state has been carrying out military operations across the country's predominantly Kurdish south-east since July last year, after the People's Democratic Party (HDP), a political party representing the Kurdish rights movement, won enough seats in a general election to pass the threshold needed to enter the Turkish parliament for the first time in history.

After the elections, the security services rounded up hundreds of HDP activists and party members, particularly in the south-east where the party won huge electoral majorities. Local residents in the most active Kurdish neighbourhoods organised into armed groups known as the YDG-H, and responded by digging trenches and erecting barricades, declaring the areas off-limits to Turkish security forces and going on to announce "self rule" in the neighbourhoods.

A city under fire

According to information collected by the Diyarbakir Municipality, more than 20,000 people had already fled Sur in Diyarbakir by 26 January. Harun Ercan, an official in the Diyarbakir Municipality's head office, showed a file meticulously listing the details of the Sur refugees: names, numbers, phone numbers, and addresses within Sur – many of which may have now been demolished in the fighting. "Some have sought refuge with relatives, others have grouped together to rent temporary accommodation, but the army is giving families little time to prepare before ordering them to leave their homes, so many don't have much money with them," Ercan said.

"The government perceives the Kurdish liberation movement as a whole to be too powerful and they want to break it," Ercan said. "It's no coincidence that the places where the army is operating, the places under curfew, are the places where HDP's vote share was highest and where most people support the Kurdish rights struggle. The message is simple: ask for self-rule, get your house destroyed," Ercan said.

Speaking about the fighting in an interview with Turkish television station A Haber in December, Prime Minister Ahmet Davutoglu said the target of the operations was not the Kurdish people as a whole, but "terrorism" which he said had been brought from the villages into major settlements. In a statement on the expansion of the curfews given on 27 January, the local governorate said the move was taken to "restore public order." It also added that it could not confirm any information about abuses in the areas under curfew until "the terrorists have been cleaned out and security forces can enter freely." But few in Diyarbakir's civil society seem to agree with the governor's assessment. 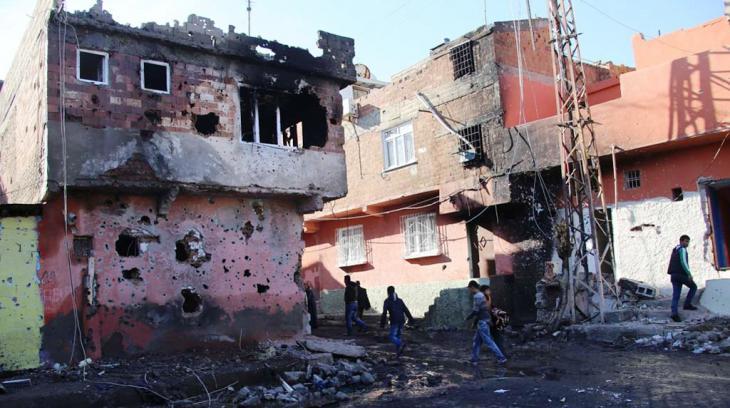 "Want self-rule? Then we′ll destroy your house!": according to the HDP, at least 117 civilians have died since the curfew was imposed on Cizre, Silopi and the district of Sur in the Kurdish city of Diyarbakir. Turkey has been pursuing a major offensive against the PKK in south-eastern Turkey for weeks. A ceasefire that had been in place between the government and the PKK for over two years collapsed in July. According to information gathered by the "International Crisis Group", at least 243 soldiers have been killed in the conflict since July. The PKK have confirmed the loss of 257 fighters

Neset Girasun is a lawyer from the Diyarbakir Bar Association and former colleague of the late Tahir Elci, a human rights lawyer renowned for his support for Kurdish political and cultural rights who was murdered in Sur in November. Girasun has spent the last two months preparing an application to the European Court of Human Rights (ECHR) on behalf of families under curfew to have the curfews in Sur and other south-eastern cities condemned as illegal. Having first sought to do the same in Turkish courts, and had the case dismissed within hours, he and his team filed at the ECHR in September.

But Girasun′s attempts have thus far proved fruitless. The ECHR has condemned individual abuses committed by the Turkish state during the curfews but has rejected the cases to have the curfews themselves deemed illegal. „We had hoped that in Europe there might be a chance to pursue this," Girasun said in his office in Diyarbakir. "But frankly it looks like a political decision – Europe is supporting Turkey's government politically and there's no interest in the rights of the people in the south-east."

Most people in Diyarbakir, regardless of their political associations, believe that the European Union has shirked its responsibilities by ignoring what is happening in south-eastern Turkey, or that it is actively supporting the Turkish government's position and overlooking human rights abuses because of its interest in Turkey stemming migrant flows to Europe.

Reha Ruhavioglu, a member of the religiously based human rights group Mazlumder feels Europe is showing great hypocrisy over the conflict. "Where is the pressure from the EU on Turkey over this? People are dying in great numbers and even the civil associations are staying quiet. Unfortunately it looks like the EU only cares about the rights of Europeans."

Having taken control of the traditional media, Turkish President Erdogan is now extending his reach to the social networks. A new law has been passed to rein in major digital ... END_OF_DOCUMENT_TOKEN_TO_BE_REPLACED

Although a unity government was formed in Libya in March 2021, tensions and possible crises between the political actors are already emerging. What problems does the country face ... END_OF_DOCUMENT_TOKEN_TO_BE_REPLACED

In Islamic mysticism, Ramadan is more than just a period of prescribed abstinence, signifying an opportunity for inner contemplation. Marian Brehmer explores the spiritual ... END_OF_DOCUMENT_TOKEN_TO_BE_REPLACED

The USA and NATO plan to withdraw from Afghanistan by September. The operation is risky, the outcome uncertain. Many Afghans fear civil war. The quake on the Hindu Kush will also ... END_OF_DOCUMENT_TOKEN_TO_BE_REPLACED

The neo-Ottomanism propagated by Erdogan has long been more than rhetoric and symbolic politics. This can be seen from recent developments in parts of northern Syria, where Turkey ... END_OF_DOCUMENT_TOKEN_TO_BE_REPLACED

Televised Turkish dramas are all the rage in the Middle East. A young Ottoman TV Empire has been expanding its soft power by harnessing regional dialects, Arabic names and viewers ... END_OF_DOCUMENT_TOKEN_TO_BE_REPLACED
Author:
Tom Stevenson
Date:
Mail:
Send via mail

END_OF_DOCUMENT_TOKEN_TO_BE_REPLACED
Social media
and networks
Subscribe to our
newsletter