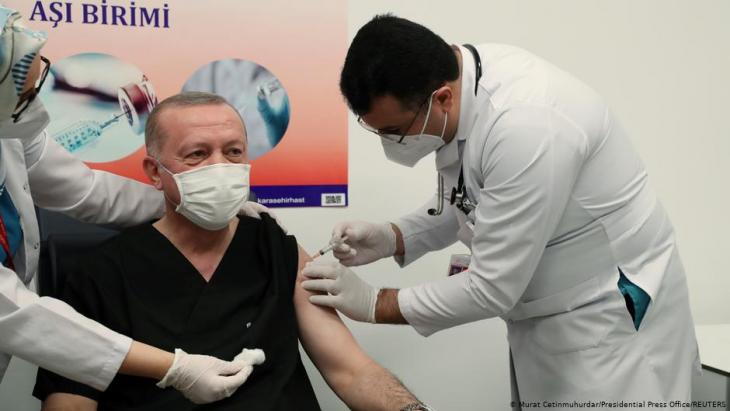 Turkey launched its nationwide vaccination campaign with a Chinese vaccine in January. But the public focus is more on the desolate economic situation. Turkish politicians have failed to create real awareness of the dangers posed by coronavirus, writes Marion Sendker in her report from Istanbul

Recep Tayyip Erdogan sits upright, staring into the middle distance. On either side of him stands a doctor. The arm of the doctor on his right is around the president, as if in a kind of half embrace. The doctor on his left is injecting the president with his second vaccine dose. In the photos and video footage that have now been published, which look exactly like the pictures from the first vaccination appointment in mid-January, it looks a little as if the Turkish president is afraid of needles.

The photo is either fake or out of date. According to government sources, Erdogan was vaccinated back in early December 2020. A video of the vaccination was released to coincide with the start of Turkey's national vaccination campaign, which had been pushed back by one month. According to the Ministry of Health, just under three million Turkish citizens have been vaccinated against COVID-19 since then.

Vaccine from China for some but not for all

The vaccine being used is "CoronaVac", which was developed by a Chinese biopharmaceutical company. According to the Ministry of Health, the delivery of 100 million doses has been agreed. So far, only about 15 million have been delivered. A variety of studies – including one conducted in Turkey, conclude that the Chinese vaccine has an efficacy rate of about 50 percent.

Serdar Savas, epidemiologist and former Vice President of the European Regional Office of the WHO, feels that this figure is too high. Savas says that the Turkish study was not conducted scientifically. He assumes that the Chinese vaccine has an efficacy rate of about 40 percent. "We don't know whether it is safe for the risk groups. A placebo is probably just as efficacious," he says.

Other vaccines, such as the one produced by BioNTech Pfizer, are said to have an efficacy rate of about 90 percent. But these or other vaccines are not available in Turkey. "Neither I nor the rest of the population deserve that," says Savas. Erdogan obviously agrees with him. Savas goes on to say that "all available data shows that Erdogan and the people closest to him have received the BioNTech vaccine."

Not enough money, but plenty of Uighurs

Ankara cannot afford to vaccinate the entire population with the vaccine from Germany or comparable vaccines. The country is therefore dependent on the Chinese vaccine, but is in a dilemma regarding China.

It is estimated that about 50,000 members of the Uighur Muslim minority, which faces brutal persecution in China, have taken refuge in Turkey in recent years. Erdogan himself has spoken out in defence of the Uighurs in the past and offered them a safe haven. 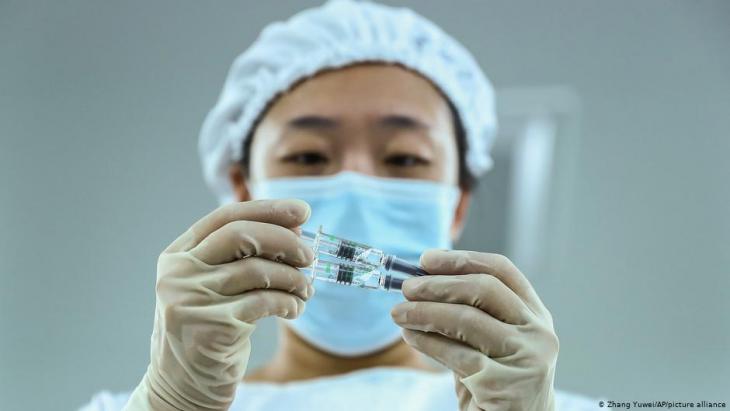 Does the Chinese vaccine make Turkey susceptible to blackmail? About 50,000 of the Uighur Muslim minority, brutally persecuted in China, have taken refuge in Turkey in recent years. Erdogan himself had publicly spoken out in favour of the Uighurs and offered them protection. China, however, has long wanted the extradition of Uighur activists. Shortly before the arrival of the first 1.5 million vaccine doses of "CoronaVac" from China, the Turkish parliament addressed the extradition agreement sought by Beijing

China, however, has wanted the extradition of Uighur activists for a long time. And now, the Turkish parliament has addressed the extradition agreement with China – shortly before the first 1.5 million vaccine doses arrive from China. This is terrifying Turkey's Uighur community.

The circumstances surrounding the second delivery of an agreed 10 million doses from China point to the fact that Uighurs are currently very valuable: delivery of the second batch was delayed by several days. It was only after several Uighurs with relatives in Chinese camps were arrested in Istanbul that Beijing sent an airplane carrying 6.5 million doses instead of 10 million doses.

Home
Print
Newsletter
More on this topic
Politics and COVID-19: Coronavirus sees political polarisation in Turkey deepenCoronavirus and press freedom in Turkey: Erdogan's crusade against "all media and political viruses"COVID-19 pandemic: How is Turkey dealing with the corona crisis? Interview with Uighur activists: Does no-one have the guts to tackle China on the Uighurs?
Related Topics
Coronavirus, Education, Health, Immigration, Justice and Development party (Turkey), Migration, Policy on refugees and migration, Recep Tayyip Erdogan, Uighurs
All Topics

This 11 September marked the nineteenth anniversary of the terrorist attacks in New York and Washington. The wide-ranging repercussions of those attacks in the years since 2001 ... END_OF_DOCUMENT_TOKEN_TO_BE_REPLACED

Lacking support from Arab countries for its stance on the Kashmir dispute, Pakistan is looking for new alliances under China's leadership. How practical is it for Islamabad to ... END_OF_DOCUMENT_TOKEN_TO_BE_REPLACED

A partnership planned between Iran and China is intended to strategically link the two countries for a quarter of a century. It is unclear, however, exactly what the alliance will ... END_OF_DOCUMENT_TOKEN_TO_BE_REPLACED

A broad U.S.-led effort to hold the Chinese government to international account for its abuses of largely Muslim Uighurs in Xinjiang would, at the very least, remind China that ... END_OF_DOCUMENT_TOKEN_TO_BE_REPLACED

Five years after the Joint Comprehensive Plan of Action was concluded, it is on life support, following the US's reinstatement of sanctions and Iran's return to enrichment ... END_OF_DOCUMENT_TOKEN_TO_BE_REPLACED

END_OF_DOCUMENT_TOKEN_TO_BE_REPLACED
Social media
and networks
Subscribe to our
newsletter