When men feel too much love: Turkish arabesque songs are climbing the German charts. Artists like Muhabbet or Mehmet & Murat are drumming up quite a following on the Internet. And the record companies are starting to knock on their doors. Daniel Bax reports 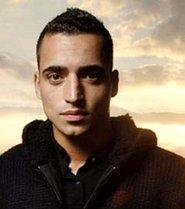 ​​In the video for Muhabbet's single, we see a bloke standing in the rain. Images of happier days, days he spent with his beloved, and images of their first fight and the pain of separation flash before his eyes. Meanwhile, Muhabbet, full of anguish, sings "She's lying in my arms / I just can't bear the pain" and beats his fist on his chest.

With his striking features, his ornamental style of singing, and the unbridled photo story aesthetics of his video, Muhabbet bears little resemblance to the sort of German-language pop singers that appear day-in, day-out on the music channels MTV and Viva.

To a certain extent, his ballad "Sie liegt in meinen Armen" (She's lying in my arms) really does break the mould: it is the first example of German-language arabesque schmaltz to break into the German charts.

Arabesque music is a Turkish music genre that sounds very strange to western ears because of its typical wailing sound. Some German cynics have even likened it to caterwauling. But this comparison with wailing is not as nasty as it might seem: after all, almost all arabesque songs are about broken hearts in all their various guises. Sometimes the (generally) moustachioed singers beg their beloved to give them one last chance, sometimes they bemoan the fact that fate holds neither happiness nor love in store for them.

To date, arabesque music has led a fringe existence in Germany. It was generally to be heard in kebab shops, in Turkish grocery stores, or from the loudspeakers of a passing BMW. But at last, arabesque music has found its way into the mainstream. Young singers of Turkish origin who were born and bred in Germany have translated the lyrics of these arabesque songs into the language of their native country.

Murat Ersin (Muhabbet's real name) wrote his song three years ago. But because he had no idea how to sell it to a German record company, he made it available on the Internet where it could be downloaded free of charge. This proved his breakthrough: the song was downloaded over 250,000 times from the Kazaa swap website. There was even enthusiastic feedback from Turkey.

Bolstered by this success, the Turkish German from Cologne approached Sony. Sony duly released "Sie liegt in meinen Armen" as a single. Ever since, the 21-year-old has been appearing on television shows up and down the country. He calls his musical style, which is heavily influenced by soul and R 'n' B, R'n'Besque.

But Muhabbet is not alone. Others are waiting for their chance too. People like Cetin Cetinkaya, who once sang with Muhabbet and whose songs have to date been doing the rounds in online forums, or Mehmet & Murat, a duo about whom little more is known than their first names. Here too, their music is only available on the Internet. Because some of their lyrics sound as if they have been translated literally from Turkish into German, they are sometimes unwittingly amusing.

A morbid and masochistic refrain like "drive the knife into my heart / so everything is steeped in blood" is likely to be a turn-off for most German listeners even if it is made clear to them that the song is about broken hearts and refers to a Turkish saying. Other lyrics like "Do you think I'm still waiting for you? / Think again, this time you've drawn the short straw" are charming in their own sort of clumsy way.

"Who says that men don't cry?"

Nevertheless, Mehmet & Murat have already built up a real following on the Internet and Turkish chat forums are full of devoted songs of praise – mostly from female fans. This is undoubtedly because they have the courage to show their feelings, not to mention their penchant for kitsch.

If people like Necla Kelek, sociologist and author of the book "Die fremde Braut" (The foreign bride), are to be believed, Mehmet & Murat, Cetin Cetinkaya, or Muhabbet, are all examples of a species that doesn't actually exist. This species is the "sensitive macho" – an image that does not fit into the cliché of the wild ghetto Turk, which is so often peddled by the media. After all, in their song "Wo bist du?" (Where are you?) Mehmet & Murat pose the question: "Who says that men don't cry? Who says that?" Good point. Who does say that men don't cry?

Readers are kindly asked to refrain from laughing when I say that there are several indications that arabesque music could be the next big thing to come from the multi-ethnic streets of this republic and carve out a permanent niche for itself in the German music scene. Just like German hip-hop and German soul before it.

So, to all you cynics out there who like to view everything with a healthy dose of scepticism, I say: the time has come to put a brave face on it! Oh yes, and another thing: when that happens, the final death-knell for German schlager music will have sounded.

This article was previously published by the German daily TAZ.

Palestinian Hip-Hop
"Put down the Stone, Pick up the Mic"
After he was shot at by an Israeli soldier, the young Palestinian Muhammad al-Fara decided words were a better way of opposing the occupation than stones. But people in the Gaza Strip have a hard time accepting this musical form of resistance. By Peter Schäfer

Iran
A Tightrope Walk between Adaptation and Protest
Despite all the harassment by religious moral watchdogs over the last 25 years since the revolution, Iran has been witness to the development of a vital rock and pop music scene. Although strongly popular among the country's youth, many underground bands in the Mullah state still live in the shadows even today. Arian Fariborz reports

END_OF_DOCUMENT_TOKEN_TO_BE_REPLACED
Social media
and networks
Subscribe to our
newsletter