Armenia and Turkey have a history steeped in conflicts. Now the two countries' governments are on the brink of reconciliation – but peace will be impossible without the involvement of other players, writes Ömer Erzeren from Istanbul 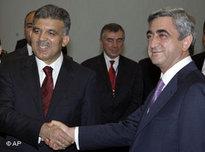 Abdullah Gül and the Armenian prime minister Sarkisian in Yerevan on 6 September 2008, before the Turkey vs. Armenia qualification match for the football world cup. The Turkish president's visit was a minor sensation

​​One day before 24 April, the day on which Armenians around the world commemorate the genocide in the Ottoman Empire, it was revealed that Turkey and Armenia have been involved in secret negotiations under Swiss mediation for some time. In a declaration issued simultaneously by the two foreign ministries, the states announced they had reached a framework agreement to normalise their bilateral ties.

They have agreed on a roadmap to "develop good neighbourly relations in mutual respect and progress peace, security and stability in the entire region". "Tangible progress" had already been made, they commented.

Optimism – and plenty of hurdles

For the first time, an official document has thus given grounds for optimism regarding peace between Turkey and Armenia. But caution is in order after so many years of mutual hostility. When it comes to both countries coming to terms with the past and to relations between the neighbouring states of Turkey and Armenia, there are plenty of hurdles along the way.

The first is the conflict over the terrible events of 1915 in the Ottoman Empire. Armenia categorises the massacre as genocide and refers to the systematic annihilation of 1.5 million Armenians, whereas Turkey categorically rejects the use of the term "genocide". Many Muslim Turks, Ankara maintains, also fell victim to joint actions by Russian troops and Armenian militias during the war years.

The Turkish authorities have at least now agreed for a bilateral commission of Turkish and Armenian historians to work on establishing the truth of what took place. Until very recently, the subject was absolutely taboo. 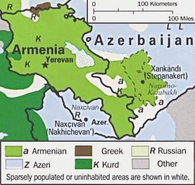 The enclave of Nagorno-Karabakh is a bone of contention between Armenia and the Turkic state of Azerbaijan. The region has a majority Armenian population but is officially part of Azerbaijan

​​The next point of conflict is the non-recognition of the Treaty of Kars, dating from 1921. Originally signed by Soviet Russia and Turkey, it still forms the legal basis for the border between Turkey and Armenia to this day. The conflict between the two states escalated in 1993 when Turkey – in alliance with the Turkic Azerbaijanis – closed the border to Armenia.

A "nyet" from Baku

In the face of all the difficulties, it is no surprise that the latest agreement between the two states and the talk of a "roadmap" have led to heightened emotions in both states. The Armenian Tashnag Party withdrew from the coalition government in protest. There was talk of "betrayal" in both Armenia and Turkey. Ankara's nationalist opposition attacked the government for concluding the agreement.

Abdullah Gül visiting the ruined city of Ani, the former capital of the Armenian Empire now on Turkish territory. Diplomatic ties have been cut since 1993

​​There had been fierce attacks from Azerbaijan even beforehand, when initial signs of Turkish-Armenian reconciliation were shown and US President Obama himself encouraged the Turkish and Armenian foreign ministers to normalise relations during his state visit to Turkey. Turkish television series shown on Azerbaijani stations were cancelled overnight, and a parliamentary commission made its way to Ankara to express its dismay at the recent developments.

The power of oil

The most significant of Azerbaijan's threats was its reminder that it has the upper hand over oil and gas supplies. Baku was thinking of raising gas prices, it was announced. At the peak of Azerbaijan's hostility towards Turkey, President Ilham Aliyev travelled to Moscow for talks with his Russian counterpart Medvedev. Gazprom and the Azerbaijani oil company published a memorandum of understanding on gas deliveries.

"For Azerbaijan, cooperation in this sphere is also an element of the diversification of gas supplies, with Azerbaijani gas currently transited only westwards," commented Aliyev in Moscow. A major contract with Russia would be a stab in the back for the Nabucco pipeline project favoured by Turkey and the EU, designed to transport Azerbaijani gas to Europe while bypassing Russia. So it is not without reason that Turkey's Prime Minister Tayyip Erdogan has repeatedly emphasised that "Turkey will do nothing that harms Azerbaijan."

Knock-on effects on the Caucasus

Armenian protests against Abdullah Gül's visit on 6 September 2008. This was the first ever visit by a Turkish head of state

​​Armenian-Turkish reconciliation would not only be a radical rupture in the poisoned relations between the two countries after nearly a century of hostility, but would also have direct knock-on effects on the entire Caucasus region, in the wake of last year's military conflict in Georgia. Not only the opening of the Turkish-Armenian border and the genocide discussion will be on the agenda; progress in the Armenian-Azerbaijani conflict and the future of oil and gas deliveries from Azerbaijan will also be at stake.

Without rapprochement between the West and Russia on energy and progress in the conflict over Nagorno-Karabakh, a bilateral compromise between Turkey and Armenia will be extremely delicate. Following talks with the European Commission President Barroso – likely to have focused on energy issues – President Aliyev asked, "Is Nagorno-Karabakh settlement disconnected from Turkish-Armenian rapprochement or not? This is a very simple question and a very simple answer is needed."

It is highly likely that Turkey informed both the USA and Azerbaijan on the progress of the talks and the roadmap agreed upon. Russia was probably kept abreast of events by the former Soviet republic Armenia. The negotiations for the solution of the Azerbaijani-Armenian conflict are being held within the OSCE with the involvement of the USA, Russia and France.

The Armenian and the Azerbaijani presidents are scheduled to meet up in Prague on 7 May. If the USA and Russia pull together in the Caucasus, there would in fact be nothing to dampen the optimism of the Turkish-Armenian declaration.

Ömer Erzeren was born in Ankara in 1958 and holds German and Turkish citizenship. He has been Turkey correspondent for "die tageszeitung" (taz) and the "Zürcher Wochenzeitung". Erzeren has lived in Berlin and Istanbul since 1998, writing books and articles for numerous German, Turkish and English publications.

Conflict over Berg Karabakh
"It's Time to Forget This War"
In the Berg Karabakh region, where Armenians are a majority, the war has long been over. But the conflict continues to smolder. Armenians as well as Azerbaijanians are ready to wage war, if necessary. Andreas Brenner reports from Berg Karabakh

Turkish Reactions to the French Bill on the Armenians
Attempts to Limit the Damage
Since the lower house of the French parliament passed a bill making the denial of Turkish genocide against the Armenians into a punishable crime, it's not just Turkish nationalists and right-wing politicians who have been protesting against the law. There have been critical voices from the EU, as well as from Turkish intellectuals, as Ömer Erzeren reports

END_OF_DOCUMENT_TOKEN_TO_BE_REPLACED
Social media
and networks
Subscribe to our
newsletter