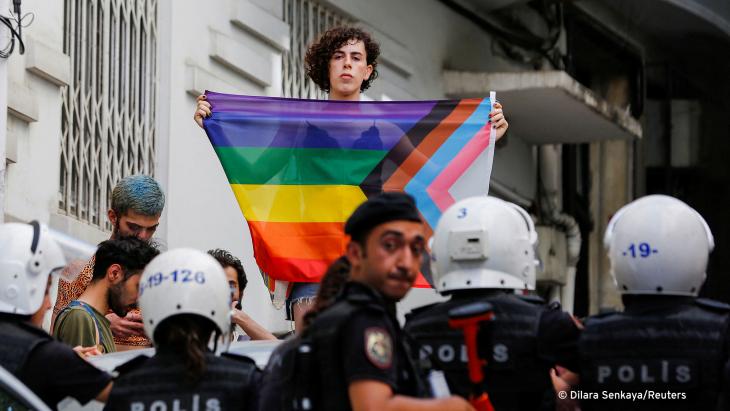 Turkish police on Sunday broke up a banned Pride march in Istanbul, detaining more than 200 demonstrators and an AFP photographer, journalists and organisers reported.

The governor's office had forbidden the march around Taksim Square in the heart of Istanbul, but protesters gathered nearby under heavy police presence earlier than scheduled.

Kilic, who was taken away handcuffed from the back, was being held in police custody. He was also detained during last year's Pride march.

Police prevented the press from filming the Istanbul arrests, according to journalists.

Turkey's largest city has banned the march since 2015, but large crowds nonetheless gather every year to mark the end of Pride Month. Organisers called the ban unlawful.

“We do not give up, we are not afraid! We will continue our activities in safe places and online,” the Istanbul LGBTI+ Pride Week Committee said on Twitter.

Kaos GL, a prominent LGBTQ group, said shortly before the march’s 5 pm start that 52 people had been detained. The Pride Week Committee later said more than 100 had been arrested.

There was no immediate word on the number of arrests from the police or the governor’s office.

Images on social media showed people being frisked and loaded onto buses, including at least one news photographer. Journalists' union DISK Basin-Is said “many” were beaten by police.

Local residents banged pots and pans from their windows and balconies in a show of support for the marchers as a police helicopter circled overhead.

Metal fences and lines of riot officers cordoned off streets around Taksim Square and Istiklal Avenue in the Beyoglu district, the heart of the city’s shopping and tourism sectors, as well as a traditional gathering point for protesters.

Metro services around Taksim Square were shut down for hours ahead of the march.

Turkey previously was one of the few Muslim-majority countries to allow Pride marches. The first was held in 2003, the year after President Recep Tayyip Erdogan’s party came to power.

In recent years, the government has adopted a harsh approach to public events by groups that do not represent its religiously conservative views. Large numbers of arrests and the use of tear gas and plastic pellets by police have accompanied Pride events.

Counter-demonstrations by nationalists and Islamists, who claim the LGBTQ community is a danger to “Turkish values”, have also threatened marchers.    (France24/AFP/AP)

END_OF_DOCUMENT_TOKEN_TO_BE_REPLACED
Social media
and networks
Subscribe to our
newsletter