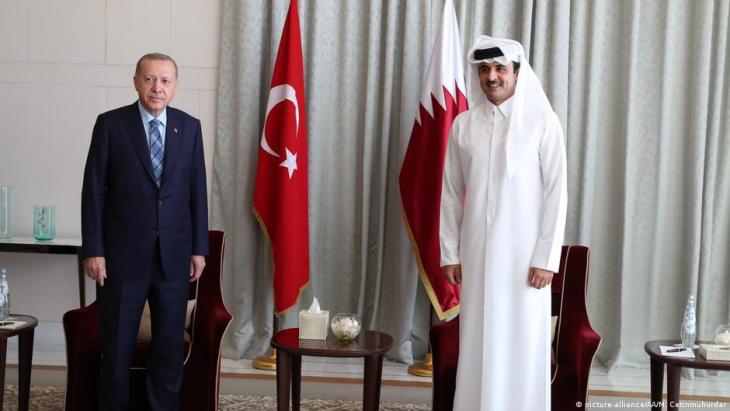 Ankara's foreign policy apparatus is currently running at top speed. While politicians in the West busy themselves with evacuating Kabul and analysing the chaos, which not even optimists would term effective crisis management, Erdogan's Turkey seems to be one step ahead. By Ronald Meinardus

In line with the strategic maxim that a crisis always offers opportunities, Erdogan is looking to the future: "We will continue efforts to enable the return of stability – beginning with Afghanistan," commented Turkey's president, in full-on global crisis manager mode.

In doing so, Turkey is adopting a systematic approach. Ankara's Afghanistan plan consists of three components: military, political and economic.

"We will stay here as long as our Afghan brothers want," the Turkish defence minister is quoted as saying. Hulusi Akar has his hands full these days co-ordinating the Turkish military operation at Kabul airport. The TV pictures reaching us from the Afghan capital show this is not an easy mission. Maintaining a military presence at Kabul airport is a central feature of Turkey's plan.

Long before the current turmoil, on the fringes of the NATO summit in Brussels in mid-June, Presidents Biden and Erdogan had agreed in principle that Ankara's soldiers would maintain peace and order at the capital's airport after the Americans left. Erdogan pushed for the risky mandate, as it offered him the prospect of keeping a foot in the door of the strategically important country, even after the withdrawal of U.S. troops.

But the agreement with Joe Biden was made two months ago – and is thus obsolete. In the meantime, the cards have been re-shuffled on the Hindu Kush; now it is no longer the Americans who are in charge, but the Taliban. And they get to decide who controls Kabul airport. 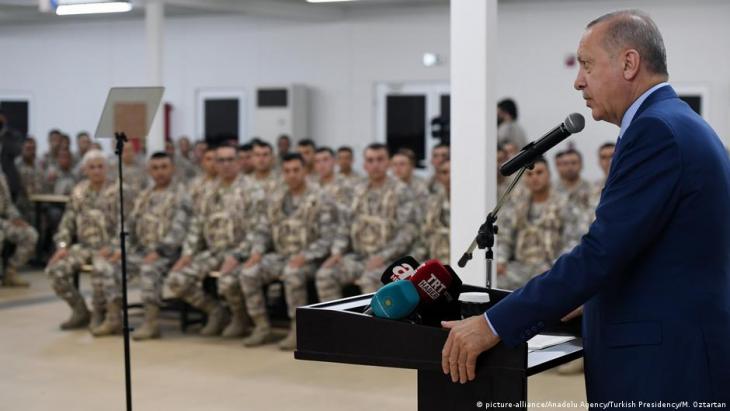 "As long as our Afghan brothers want": Presidents Biden and Erdogan had agreed in principle that Ankara's soldiers would maintain peace and order at the capital's airport after the Americans left. Erdogan pushed for the risky mandate, as it offered him the prospect of keeping a foot in the door of the strategically important country. In the meantime, the cards have been re-shuffled on the Hindu Kush; now it is no longer the Americans who are in charge, but the Taliban. And they get to decide who controls Kabul airport

While the Western troops could not leave quickly enough, there is no corresponding marching order for the units from Anatolia. Erdogan is keen for his forces to stay. Defence Minister Akar is playing the historical card to make such a prospect palatable to the new rulers. "We have common historical values," said Akar. "Our activities continue in a way that befits our noble nation and history." President Erdogan, referring to widespread international concerns about the country's stability, added: "Turkey's military presence in Afghanistan will give the new administration an upper hand in the international arena and facilitate its path."

A new alliance with Pakistan and Qatar

In their political forays, the Turks rely on tried and tested friendships and networks: regardless of its NATO membership, Ankara has ramped up relations with the Islamic Republic of Pakistan and the Gulf Emirate of Qatar hugely in recent years – including in terms of military cooperation. Erdogan is now aiming to bring this mini-alliance to fruition. If Turkey's plans are anything to go by, the Doha-Islamabad-Ankara axis will set the agenda when it comes to policy on Afghanistan.

To what extent this scenario is merely Turkish wishful thinking, or whether it will ultimately lead to tangible political results remains to be seen. The fact is that Ankara, in solidarity with Doha and Islamabad, is already tinkering with a new order for Afghanistan through targeted political interventions. The goal is a broad-based government – or transitional government – that includes as many political parties and groups as possible. 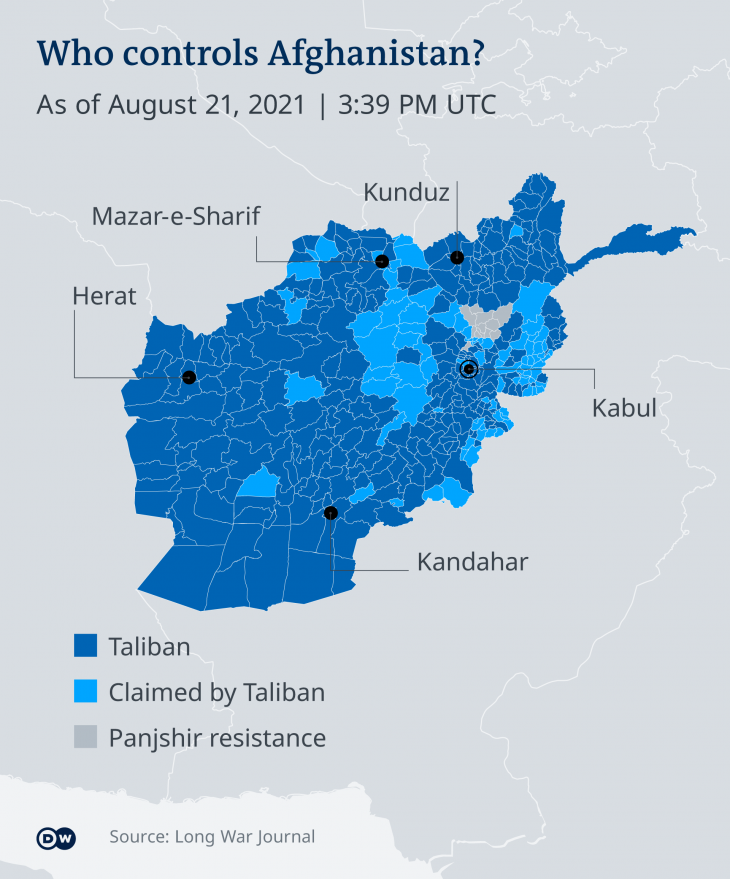 Wishful thinking on the part of the Turks? Discussions regarding a future government are currently taking place – for the most part, behind closed doors. The Turkish side is keen to keep as many options open as possible. In this context, Foreign Minister Cavusoglu has mentioned ex-president Hamid Karzai and former prime minister (and warlord) Gulbuddin Hekmatyar, whose relations with Erdogan date back to the 1980s. A photo from those years showing a young Erdogan at the feet of the Islamist warlord recently did the rounds of the Turkish media

"We have communications [with the Taliban] through different channels," revealed Turkish foreign minister, Mevlut Cavusoglu. Even before the change of power in Kabul, he had invited the Taliban's political leadership to Turkey for talks, the minister said in an interview. The escalated situation on the ground had prevented the talks from taking place. Yet, even though Turkish representatives like to point to their direct access to the Taliban these days, Ankara is by no means putting all its eggs in one basket.

"Standing by Afghanistan in good and bad days, regardless of who is in power, is a requirement of the brotherly relationship between the two nations," said President Erdogan. In the discussions regarding a future government that are currently taking place – for the most part, behind closed doors – the Turkish side is keen to keep as many options open as possible. In this context, Foreign Minister Cavusoglu has mentioned ex-president Hamid Karzai and former prime minister (and warlord) Gulbuddin Hekmatyar, whose relations with Erdogan date back to the 1980s. A photo from those years showing a young Erdogan at the feet of the Islamist warlord recently did the rounds of the Turkish media.

Keen to secure their influence in Kabul in future, the Turks are pushing hard for their political confidants to assume positions of power, writes Turkish security expert Metin Gurcan in Al Monitor. He also highlights the relationship between Erdogan and Hekmatayar.

Among Ankara's political circle of friends are also leading representatives of the government who have now fled the advancing Taliban. The daily newspaper "Hurriyet" reports official Turkish "escape aid" for high-ranking members of the deposed government. The Taliban had already taken up public residence in Kabul's presidential palace when a Turkish Airways jet ferried the VIPs of the old regime out of the country. Among the passengers were the foreign minister and the second vice-president, as well as a number of ex-ministers and MPs – 40 people in all. 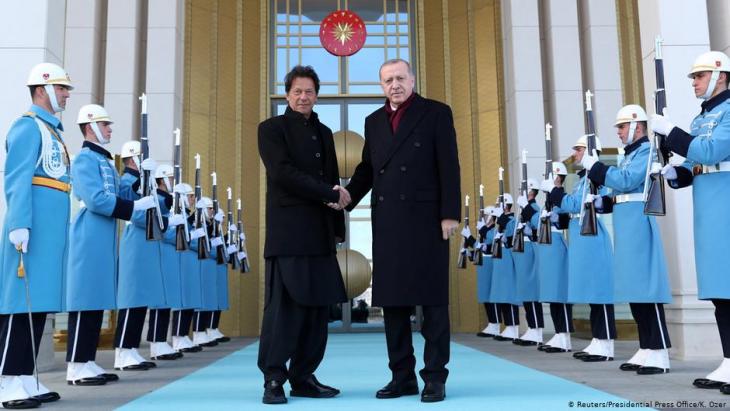 "Pakistan has a unique relationship with Afghanistan and it has a strong dialogue with the Taliban. Turkey is also in close dialogue with Qatar, a long-term mediator between the Taliban and the Afghan government,“ writes Serkan Demirtas in the Turkish Daily News. "These three countries could develop a new mechanism to engage with the Taliban"

Foreign economic policy is a central component of Ankara's intensified foreign relations. Turkish media are already rejoicing that new opportunities for Turkish investors will soon present themselves in the resource-rich landlocked country. Sensing an upswing, the Turkish construction industry is particularly eager to be part of the reconstruction of Afghanistan after decades of destruction. "Our construction firms could have access to a large market," said Suleyman Ciliv of the Turkish-Afghan Business Council.

In no other area are the Taliban's expectations greater than in the economy. "Our entire infrastructure has collapsed," said Suhail Shahhen, spokesman for the group in an interview with the Turkish daily Turkiye. "We will rebuild Afghanistan in all areas and we need Turkey the most to do that." The Taliban spokesperson took the opportunity to say that – out of the public eye – the organisation has maintained close relations with Turkey, and then praised the uniqueness of the relationship: "Turkey's bond with Afghanistan can't be compared with any other country."

By now, the public has become accustomed to rhetorical pleasantries from the Taliban. Whether these kind words can be taken at face value remains to be seen. The hoped-for investments will soon raise the question of money, which neither the rulers in Kabul nor, presumably, the potential investors in Turkey have at their disposal. It is doubtful whether the economically stumbling Turkish government will pay in advance.

Crucial in all this are the political developments. Whatever the outcome of the struggle for power and influence in the new Afghanistan. President Erdogan has put his claim to a say on record – in both word and deed.

Education for girls and women is still possible in Afghanistan, says Reinhard Eroes of the Kinderhilfe Afghanistan initiative. In interview with Elisa Rheinheimer, he talks about ... END_OF_DOCUMENT_TOKEN_TO_BE_REPLACED

A lawmaker in Pakistan's rugged northwest was sipping tea with voters when his phone chirped to life – the Taliban were calling with a demand for 'donations'. "We hope you won't ... END_OF_DOCUMENT_TOKEN_TO_BE_REPLACED

Cries of "Benghazi!" still resonate across the USA ten years after a deadly terrorist attack in Libya killed the U.S. ambassador and three other Americans. Ethan Chorin re-tells ... END_OF_DOCUMENT_TOKEN_TO_BE_REPLACED

Sufism has fluid boundaries. Just like Islam, Sufism is inconceivable without its late antique roots. Then again, it has also exerted an influence on Hinduism. Moreover, the Sufic ... END_OF_DOCUMENT_TOKEN_TO_BE_REPLACED

Journalist Waslat Hasrat-Nazimi was forced to flee Afghanistan with her family as a child and grew up in Germany. To mark the publication of her book "The Lionesses of Afghanistan ... END_OF_DOCUMENT_TOKEN_TO_BE_REPLACED

Just as the Islamic Revolution fundamentally changed Iran 43 years ago and had an impact far beyond the country's borders, the current wave of protests sweeping the country is set ... END_OF_DOCUMENT_TOKEN_TO_BE_REPLACED
Author:
Ronald Meinardus
Date:
Mail:
Send via mail

END_OF_DOCUMENT_TOKEN_TO_BE_REPLACED
Social media
and networks
Subscribe to our
newsletter