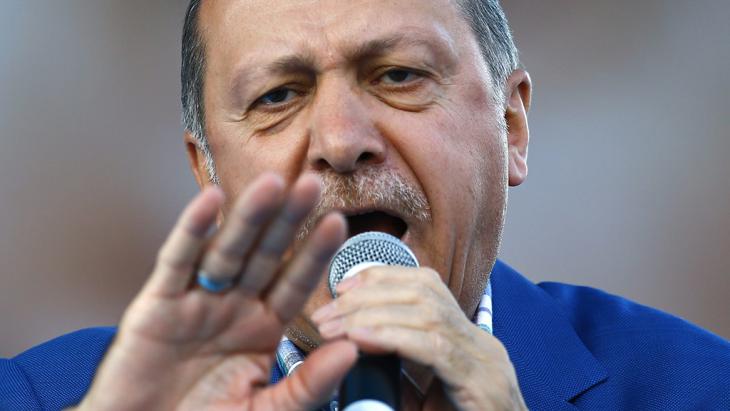 Turkey′s shift away from the West since the July 15 coup attempt is a deliberate tactic to strengthen the government′s domestic support base and pursue a more aggressive regional role. Commentary by A. Kadir Yildirim

In the aftermath of the July 15 coup attempt, Turkish foreign policy seems to have set sail to the East. This shift, in contrast to prevailing perceptions, reflects a deliberate choice made by Turkey dating back to the pre-July 15 period. A desire to boost the government′s domestic standing and pursue a more independent and aggressive foreign policy has prompted this change.

Current analyses of Turkish foreign policy tend to urge the West to show greater solidarity with Turkish elected officials and the citizens who opposed extra-democratic interventions. They suggest that Turkey needs ″sensible friends″ at this juncture – during which tens of thousands of individuals have been arrested, detained, dismissed, prosecuted and tortured for the alleged crimes of coup-plotting or terrorism.

Analysts assume the Turkish government is in survival mode, merely responding to domestic and international developments. If somehow Turkey were to exit the Western orbit, blame will rest squarely on the West for failing to accommodate Turkish demands, as Foreign Minister Mevlut Cavusoglu claimed. Turkey needs exceptional treatment at this time of existential threat, the argument goes and the West needs to ″understand″ Turkey, implicitly hinting at the West′s failure to do so in 2013 in Egypt.

″Premeditated, calculated and by choice″ 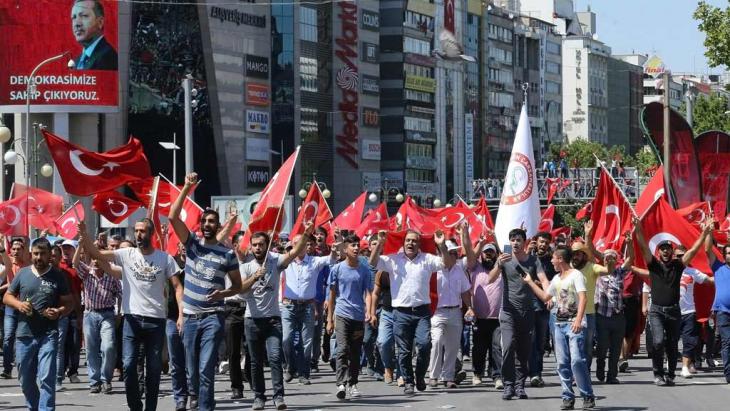 Support of the people: "in recent years, the Turkish government has mastered the art of steering public sensitivities along nationalistic, ethnic, and religious lines, rallying sizeable majorities. That the United States became the focal point of public suspicion in the wake of the July 15 coup attempt (either directly, by organising the coup, or indirectly, by abetting Fethullah Gulen) is no coincidence," writes Yildirim

The impending Turkish departure from the Western bloc is not the first of its kind in the Middle East. Indeed, it shares important similarities with Gamal Abdel Nasser′s Egypt or Ruhollah Khomeini′s Iran regarding the populist elements of anti-Americanism and anti-Westernism. Popular leaders fan the flames of these sentiments to populations ravenous for someone to blame.

Yet despite these shared characteristics, geopolitics do not dictate the shift in Turkish foreign policy. Turkey continues to be valued for its strategic importance to the West, as reaffirmed by visits by American and European officials. Likewise, the current government′s ideological convictions and perceived ″Westoxification″ cannot explain such a dramatic shift. The Islamist ideology of the Justice and Development Party (AKP) did not prevent the party from pursuing a decidedly Western foreign policy throughout the 2000s.

Turkey′s foreign policy manoeuvres in response to the coup attempt are premeditated, calculated, and by choice – not reactionary or emotional, as commonly assumed. The impending re-orientation of Turkish policy serves both domestic and international ends.

Domestically, it aims to strengthen the government′s support base, especially in light of increasing criticism of waning liberties in the country. The July 15 coup attempt has created an environment in which the widespread graft allegations from 2013 against leading figures within the AKP, including President Recep Tayyip Erdogan, have been all but forgotten.

Recently, however, two developments introduced fresh international scrutiny to these corruption allegations. An Iranian–Turkish citizen, Reza Zarrab, was arrested in Miami on charges of evading Iranian sanctions. Early court documents hint that he had various connections with high-ranking Turkish officials. In Italy, similarly, President Erdogan′s son Bilal is under investigation for ″laundering around €1 billion ($1.12 billion) in cash″. Both investigations carry the potential to undo the government′s gains in securing domestic legitimacy since 2013.

In recent years, the Turkish government has mastered the art of steering public sensitivities along nationalistic, ethnic, and religious lines, rallying sizeable majorities. That the United States became the focal point of public suspicion in the wake of the July 15 coup attempt (either directly, by organising the coup, or indirectly, by abetting Fethullah Gulen) is no coincidence. 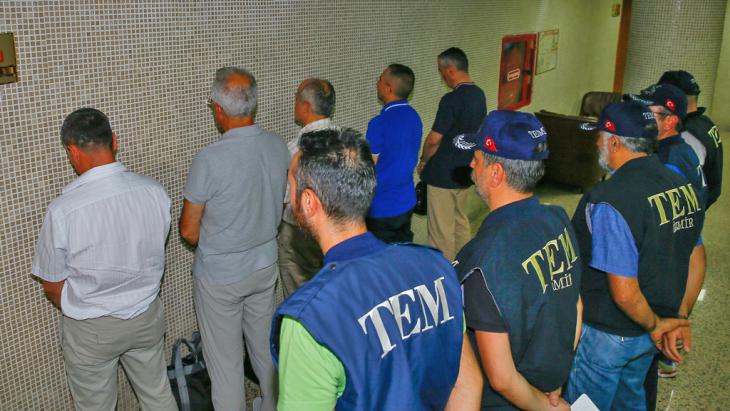 Removal of pro-NATO faction: the discharge of approximately 45 percent of all generals during the aftermath of the coup is sizeable by any measure and indicates careful planning to reshape the military

Many Turks believe ″the U.S. wants to damage Erdogan because he is a strong leader who turned Turkey into a regional power.″ Similarly, Turkish officials′ spars with Italian and Austrian prime ministers struck a chord. Strong messages from Turkish officials to re-institute capital punishment similarly risk European Union membership.

Stoking anti-Americanism is an effective means of dealing pre-emptively with the prospect of such international scrutiny; this latest wave of anti-Americanism aims to discredit any future court decision in the United States or Italy as foreign interventions. The fact that the United States has no strategic interest in undermining Turkish power, with a coup or otherwise, is irrelevant.

Internationally, a foreign policy shift will afford Turkey greater independence in entertaining regional (perhaps adventurous) aspirations; it again reflects a deliberate choice at Turkey′s end. The overhaul within the military′s top brass since 15 July is critical.

Thus far, we do not have a good sense of what happened on 15 July, but we do know that most discharged generals were pro-NATO and that American generals complained about their dismissals, expressing concerns ″about ′longer-term′ impacts from the failed coup on counter-terrorism operations.″ Crucially, the void in the Turkish military is bound to be filled with generals close to ″nonaligned and Eurasian perspectives″ and transform its ″strategic culture.″

This is no ordinary shift. The military, particularly the pro-NATO leadership, has acted as the sole mechanism preventing precarious foreign policy making in recent years. Turkey′s Syria policy and the way the military leadership stood its ground is a case in point. The discharge of approximately 45 percent of all generals is sizeable by any measure and indicates careful planning to reshape the military.

The Turkish ambition for a grander role in the region is rooted in its desire to revive a neo-Ottoman order where it plays a leading role in the Middle East. Prior to the onset of the Syrian chaos, Turkey pursued this goal with a prospering economy and creating zones of influence across the region via former foreign minister Ahmet Davutoglu′s fanciful ″zero problems″ policy. 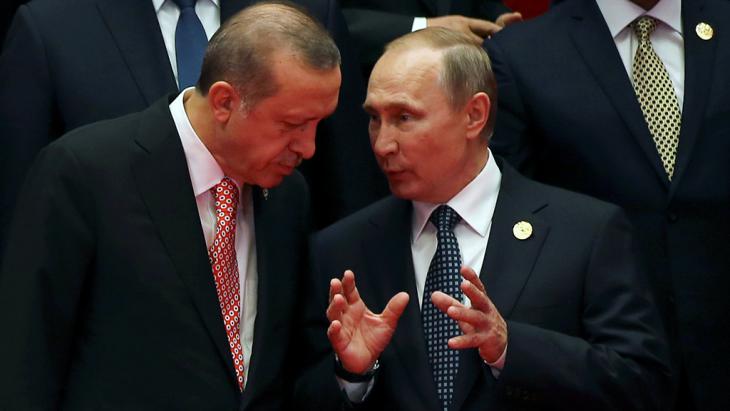 Learning from the master: "by pitching the failed coup as a foreign-backed affair and thus a national security threat, a whole array of restrictive policies, torture and suppression of dissent have been introduced – all with broad popular support," writes Yildirim

However, this approach failed when Syria disintegrated. Instead, the current government brandishes a ″military deterrence″ policy. Turkey′s commitment to NATO, its alliance with the United States, and the pro-NATO generals within the military impede the pursuit of this new independent foreign policy. The purge in the upper echelons of the Turkish military is fateful in this context.

Turning over a new page

The new foreign policy course the Turkish government desires harnessed the coup attempt to its advantage. By demonising the West as enablers of the putsch, justification for a new page in foreign policy was created to ensure domestic stability. Likewise, by pitching the failed coup as a foreign-backed affair and thus a national security threat, a whole array of restrictive policies, torture, and suppression of dissent have been introduced – all with broad popular support. Hence, it is impossible to conceive of the fast-track evolution of Turkish politics without acknowledging the connection between domestic and foreign policies.

Current developments in Turkey are a harbinger of a worsening Middle East for U.S. foreign policy. It is unclear whether high-level visits by the likes of Secretary of State John Kerry will assuage what might transpire in coming weeks. Despite some critical voices within the European Union, who are calling for ″a new kind of relationship″ and the increasingly unreliable character of Turkish co-operation with the West, Turkey′s sustained partnership with the United States and the West should be a priority. This is imperative to both sides for strategic reasons and for the improvement of the state of human rights and democratisation in Turkey.

A. Kadir Yildirim is a research scholar at Rice University′s Baker Institute for Public Policy focusing on Turkish politics. He is the author of ″Muslim Democratic Parties in the Middle East: Economy and Politics of Islamist Moderation″ (Indiana University Press, forthcoming October 2016).

Home
Print
Newsletter
More on this topic
Talking Turkey: ″What happens on the Bosphorus affects us all″Putsch aftermath in Turkey: The coup after the coupTurkey's democratic future: Hanging by a thread
Related Topics
Democracy and civil society, Fethullah Gulen, Islam and democracy, Recep Tayyip Erdogan
All Topics

German Middle East analyst Guido Steinberg and television journalist Ulrich Tilgner have both published new books on the conflicts in the Middle East. Their analyses and their ... END_OF_DOCUMENT_TOKEN_TO_BE_REPLACED

On 27 March, Iran and China signed a 25-year accord intended to foster "strategic co-operation". Despite ongoing uncertainty over the deal's actual scope, content and chances of ... END_OF_DOCUMENT_TOKEN_TO_BE_REPLACED

In Grenoble, France, two professors have been pilloried in a dispute over the use – or otherwise – of the term Islamophobia. Is freedom of speech in jeopardy? By Stefan Dege and ... END_OF_DOCUMENT_TOKEN_TO_BE_REPLACED

Liberal Islam: everything revolves around the Koran. In the search for a liberal interpretation, peculiar constructs occasionally emerge. By Alexander Flores END_OF_DOCUMENT_TOKEN_TO_BE_REPLACED
Author:
A. Kadir Yildirim
Date:
Mail:
Send via mail

END_OF_DOCUMENT_TOKEN_TO_BE_REPLACED
Social media
and networks
Subscribe to our
newsletter