Two old foes, Greece and Turkey, vow to move relations forward by increasing cooperation on low profile politics. They hope that more trust will be created to prepare the groundwork to tackle thorny issues. Ayşe Karabat reports from Athens 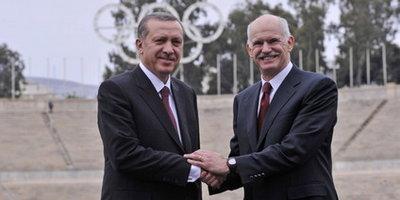 Accentuate the positive: Turkish Prime Minister Recep Tayyip Erdogan, left, and his Greek counterpart George Papandreou at the Panathinaiko Stadium in central Athens on Saturday, May 15, 2010

​​ "We are aiming to open the way to talk on all kinds of matters so that mutual trust can be established and we can talk about hard issues in time," told a high ranking Turkish diplomat to me who was one of the 320-person delegation of Turkish Prime Minister Recep Tayyip Erdoğan that accompanied him during his two-day trip to Athens in mid-May.

He had a point; both Turkish and Greek officials did not hide the fact that there are many long standing disputes and it is not realistic to expect a solution to those issues immediately.

However as columnist Lale Sarıibrahimoğlu from Taraf daily pointed out the more the two countries increase the cooperation through low profile politics, i.e., non-military issues, the more trust will be created to prepare the groundwork to tackle thorny issues.

This is why both Prime Ministers preferred to exchange views on possible cooperation areas instead of trying to find solutions to disputes. Within this framework, the first meeting of the newly introduced High Level Strategic Cooperation Council convened with the participation of ten cabinet ministers from Turkey and seven from Greece.

"This way, please": Greece and Turkey are on the track to reconciliation

​​Both prime ministers, after signing 22 cooperative agreements in many fields including education, the environment, tourism and transportation, strongly underlined that they have the political will to strengthen bilateral relations.

"We have laid the foundations for peace and cooperation despite difficulties of the past," Greek Prime Minister George Papandreou underlined in the joint press conference and recalled that relations between Greece and Turkey have never been steady but now they have decided to take a major step together.

In an exclusive interview that I conducted prior to the visit, however, Papandreou also warned that "Greece and Turkey will never be able to normalize their relations as long as there are threats in the Aegean with regard to the Greek islands and as long as there are occupation forces in Cyprus. We have to put these things behind us once and for all."

To achieve this, however, there are numerous serious obstacles to overcome. 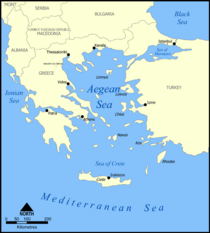 From bone of contention to "Sea of Peace"? The Aegean Sea is caught between the mainlands of Greece and Turkey

​​First of all there are long standing sovereignty claims in the Aegean Sea, a problem which brought both countries to the brink of a war in 1996. Each sides possess 6 nautical miles (11 km) off their shores in the Aegean, but Greece wants to expand it continental shelf to 12 miles under the International Law of the Sea. Turkey refers to the same law and says this rule cannot apply in the Aegean because of the proximity of the Greek islands on the Aegean to the Turkish landmass.

Both Erdoğan and Papandreou in their statements strongly underlined that the shared Aegean Sea can turn into a Sea of Peace and they hinted that an agreement might be reached soon on the methods of resolving the territorial dispute in the Aegean.

Another hard issue between Ankara and Athens is Cyprus on which hope inspiring statements are being made.

Papandreou underlined that Greece wants a solution to the Cyprus problem within the framework of the law. He also warned in the interview with me that newly elected Turkish Cypriot leader Derviş Eroğlu, who is known for his nationalistic stance, should respect the progress that has been made to date in the negotiations. 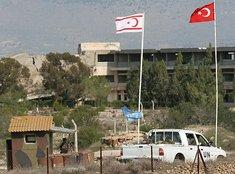 The UN buffer zone between the two parts of Cyprus: In 1974, following 11 years of intercommunal violence and an attempted coup d'état by Greek Cypriot nationalists, Turkey invaded and occupied the northern portion of the island

​​"If he starts to create stumbling blocks and raise obstacles, he will bear the responsibility. In any case, and this is a fact, Turkey's role remains crucial," he said.

During the joint press conference Erdoğan had promised that the recent negotiation process on the island would continue from where it was left off before elections in Northern Cyprus.

"I strongly believe that as the guarantor states, if we support this process, we can get a result in a very short amount of time. We should unite our efforts as soon as possible," Erdoğan underlined.

But all this does not mean that the Turkish Prime Minister's visit was free of surprises. When Erdoğan was asked if he was uneasy about the definition of Greek Orthodox Patriarch in as "ecumenical", he said "no, it did not make our ancestors uneasy, and it does not make us uneasy either." 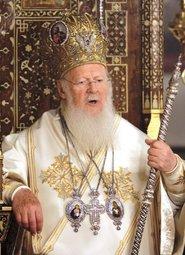 One of a kind: Bartholomew I. is the Greek Orthodox Patriarch of Constantinople

​​During Ottoman rule the Patriarch was recognized as ecumenical but Turkey claims that recognizing the ecumenical status of the Greek Orthodox Patriarchy now would be a violation of the Lausanne Treaty, regarded as the founding bases of the modern Turkish Republic. The Turkish state acknowledges the Patriarch only as the head of the country's dwindling Greek Orthodox community.

This statement of Erdoğan was praised by his Greek counterpart, who promised to improve the rights of the Muslim minority in Greece and underlined in the interview that the construction of a mosque in Athens is an obligation of the Greek state to its Muslims.

Athens is the only European capital which does not have a mosque, an issue that has been raised several times by Erdoğan in bilateral talks. A couple of days before his arrival, the Greek government announced that it would start the construction and that expenditures would be paid by the government.

During Erdoğan's visit, a Greek-Turkish business forum was also held with the participation of more than 100 businessmen from Turkey. The trade volume between two countries is around $2.5 billion and the Prime Ministers set a target of increasing this level to $5 billion within the next five years.

The amount of the trade volume was next to nothing at the beginning of the year 2000. It peaked after the rapprochement that began soon after a deathly and devastating earthquake which struck Turkey's most developed Western parts in 1999. The so-called "earthquake diplomacy" culminated with dialogue being established, albeit slowly.

Now, Greece is facing a deep economic crisis and as Turkish officials put it, it is Turkey's turn to extend a hand of friendship to Greece.

Both Prime Ministers described the meeting in Athens as a historical new beginning despite the fact that there is not much progress on the ground but lots of hope for it as it is stated in the joint declaration:

"The two prime ministers stressed their conviction that the new course of relations will steer Greece and Turkey to a brighter future for the benefit of the two peoples."

END_OF_DOCUMENT_TOKEN_TO_BE_REPLACED
Social media
and networks
Subscribe to our
newsletter