Turkish-Kurdish relations have historically been difficult and fraught with conflict. However, a recent conference in the autonomous province of Kurdistan in northern Iraq indicates a move in the direction of reconciliation. Günter Seufert reports 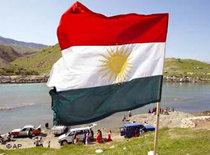 Iraqi Kurdistan is seeking closer ties with Turkey – not least because 2011 will see US troops withdrawing from Iraq, leaving the Kurds isolated within an Arab-dominated central state

​​"In some ways, we Turks are also Kurds!" The words come from a former member of the Turkish Nationalist Movement Party (MHP), an organisation which, only five years ago, preferred to refer to Kurds as "Mountain Turks" and to deny Kurdish any status as a language.

The occasion for the speech was a conference in Erbil, capital of Iraqi Kurdistan, the federal state in northern Iraq whose borders were subject to constant bombardment from a Turkish army hunting the PKK only a few short months ago.

Inside, the audience consists of Kurdish politicians, mullahs and academics. Outside the door, members of the Peshmerga, the Kurdish militia, stand guard, their job to provide protection against attacks by the PKK or Al-Qaida.

The man giving the speech is Mümtaz'er Türköne, a professor of political science at the University of Gazi in Ankara. Türköne is co-founder of a civil group, established more than 18 years ago, that has dedicated itself to overcoming the religious and political boundaries in Turkey.

With around one hundred members, including writers, journalists and politicians, the "Abant Platform" has come to Erbil from Istanbul for three days.

The occasion is the first major meeting between Turks and the Kurds of northern Iraq since 1923. Following the First World War and the Turkish struggle for independence and new statehood, the Republic of Turkey had to give up the lands between Duhok, Sulemania and Kirkuk to the British, who incorporated them into the newly founded Iraq.

At the time, the Kurds themselves would have been happy to become part of the new Turkey. Later, the intolerance of Turkish policy on the Kurdish question would bring an end to the amicability. 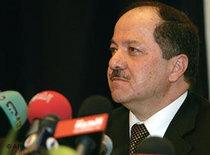 Massoud Barzani, president of the autonomous region in northern Iraq, has condemned PKK "acts of sabotage" and is interested in the development of closer relations between Iraq and Turkey

​​More recently, however, the young state of Kurdistan has been strengthening ties with Turkey. It has no other option: after all, in 2011, when the United States withdraws its troops from Iraq, Kurdistan, which owes its status as an independent province to the war against Saddam Hussein, will find itself isolated amidst the Arabs of Iraq, who have not forgotten that more than anyone else, it was the Kurds who gave support to the Americans.

Baghdad is already moving to try to limit the rights of the new federal state. The money being pumped into the province has been cut back, the Peshmerga is no longer being financed from Baghdad, and central government has re-established control over the border regions.

Of even greater importance is the unresolved dispute over possession of the oil city of Kirkuk, as well as of other towns such as Diyala, Chanekin, Mahmur and Shangal, in all of which Kurds are in the majority, but none of which currently belongs to the federal state of Kurdistan.

In Kirkuk, tensions between Kurds, Arabs and Turkmen have reached a point where they could boil over at any time. A referendum on whether the city should belong to Iraq or to Kurdistan has had to be postponed for the time being.

Although Shiites in the south of the country share the Kurds' rejection of a strong central government, there is precious little else in the way of common political ground between the politically secular, Sunni Kurds and the Shi'a and their supporters in Iran.

This is also one of the key reasons why Nawzad Hadi Mawlood, governor of Erbil, dwelt so pointedly on the topic of Kurdish-Turkish friendship at the opening of the conference.

"Kurds have not forgotten," he said, "that when Saddam Hussein murdered almost ten thousand Kurds with gas bombs at Halabja in 1988, Turkey opened its doors to millions of refugees." 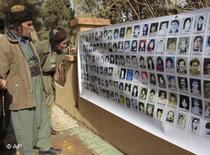 Dark chapter: the Iran-Iraq war saw Saddam Hussein use poison gas against Kurds in the northern Iraqi town of Halabja in 1988, killing thousands

​​Kurdistan's prime minister, Nechirvan Barzani, declared his readiness to take over the financing of the Erbil conference. The Turkish government of Recep Tayyip Erdogan, too, has given its support to the conference, but the man in the street and the Turkish military will be less readily convinced.

"Today we are working towards change in our country," said Mümtaz'er Türköne in Erbil, "and we need their support to achieve it." In order to aid the cause of Turkish-Kurdish reconciliation, Kurdistan's state president, Massoud Barzani, has also asked the PKK to end their attacks.

Turkish-Kurdish cooperation will also be welcomed by the Americans. The USA added the PJAK, the Iranian branch of the PKK, to its list of terrorist organisations in the second week of February, an organisation they had earlier happily used against Iran.

Another player also made his presence felt at this conference: Fethullah Gülen. In the 1990s, Turkish governments courted Gülen, a popular preacher, as a means of counteracting party political Islam. At that time, and with the support of the Turkish state, Gülen was instrumental in setting up over 150 schools in countries stretching from the Turkish republics to the Balkans and from Africa to Central Europe. 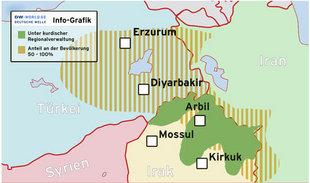 The Kurds have had their own autonomous region in northern Iraq since 1991; it passes its own laws and maintains its own police force

​​It is only within the last few years that the Fethullah Gülen network has become active in northern Iraq and in the Kurdish regions of Turkey. Gülen himself has lived in a kind of political exile in the USA since 1999.

Currently in Turkey it is the so-called Fethullahçi (followers of Fethullah) movement that is the strongest opposing force to the pro-Kurdish DTP party, with its close associations to the PKK. Fethullah Gülen's message to the conference was greeted with polite applause, and culture minister Falakaddin Kakeyi praised the network's commitment. In other respects the Iraqi Kurds were not interested in mixing Islam and politics.

The basic conflict: imperialists versus Muslims

Ali Bulaç, chief Arab-Turkish thinker on religiously encoded politics, did not go down well in Erbil. Kurdish speakers rejected his thesis that most Muslims would not die due to the actions of the West but rather to those of fellow Muslims – the basic conflict in the Middle East was one between imperialists and Muslims, they asserted.

The basis of the conflict between Turks and Kurds in Erbil is the fact that 80 years of Turkish policy on the Kurds has produced pitifully little and that the guests from Turkey wanted slowly but steadily to move away from the nationalism of their republic.

The Kurds of Iraq, on the other hand, are not going to be easily convinced that excessive national unity can lead to rapid national division.

Günter Seufert
© Qantara.de 2009
Translated from the German by Ron Walker

Qantare.de
Iraq's Constitution and Federal Structure
Heading for Stagnation?
Iraq's constitutional concept may now sadly not be developed further, which would mean that the momentum towards creating state accepted by all political forces will come to a standstill. The Syrian academic and lawyer Naseef Naeem explains why

Turkish Offensive against the PKK in Northern Iraq
Ankara Given Free Reign
Despite a few admonitions coming out of Washington, the Turkish army's incursion into northern Iraq is not really putting the country's relations with the USA to the test, Peter Philipp maintains in his commentary

Turkish PM Recep Tayyip Erdogan
The Man from the Planet Ankara
He started like Obama and ended like Bush, say his critics. How Turkish Prime Minister Tayyip Erdogan is betraying his reforms. By Michael Thumann

Three Years after the Fall of Saddam Hussein
The Federal Republic of Iraq
After the departure of the USA, Iraq could develop into a federation – with the aid of Europe. Volker Perthes assesses the basic factors of Iraqi politics and takes a prognostic look at the various possible developments

END_OF_DOCUMENT_TOKEN_TO_BE_REPLACED
Social media
and networks
Subscribe to our
newsletter