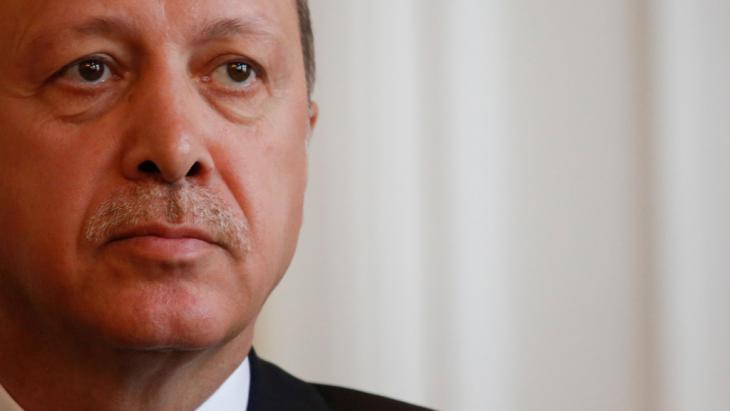 Turkish military operations against IS and the PKK
Erdogan's double strategy

After years of hesitancy, Turkey has begun launching airstrikes on IS positions in Syria. At the same time, Ankara has also deployed its air force against fighters with the banned Kurdistan Workers' Party (PKK). Analysts suspect that President Erdogan is now pursuing a strategy all his own. By Cigdem Akyol in Istanbul

For years, the Turkish government has held back from attacking the self-styled Islamic State movement (IS). But since 24 July, Turkish fighter jets have been bombing IS positions in Syria. In addition, Ankara has allowed the US to launch air attacks from the strategically placed base at Incirlik.

In parallel to this, the Turkish army has begun bombing Kurdistan Workers' Party (PKK) positions in Turkey and northern Iraq. On Tuesday, 28 July, President Erdogan announced that the peace process with the PKK, classified as a terrorist organisation by the US and EU, was over. "It is not possible for us to continue the peace process with those who threaten our national unity and brotherhood," he said.

Threat from the pro-Kurdish HDP

"Erdogan is no longer interested in a political solution to the conflict with Damascus and the PKK," says Ismet Akca, a political scientist and military expert at Istanbul's Yildiz Technical University. His reasoning: only with the unrest that is to be expected in Turkey, can Erdogan consolidate his influence and keep the pro-Kurdish People's Democratic Party (HDP), which has in recent months emerged as a real threat to his rule, at bay.

The HDP garnered a surprising number of votes in parliamentary elections last June, a result that contributed to the fact that Erdogan's conservative Islamic AKP party lost its absolute majority. After 12 years, the AKP must for the first time court a coalition partner. It has not been successful so far, and new elections are an increasingly likely prospect. And therefore, says political scientist Akca, a war on two fronts against IS and the PKK is advantageous for Erdogan.

"Erdogan is now focusing on a strategy that is nationalist and military in nature. He aims to show the Turkish people that without a stable AKP government, terrorism will return to Turkey," says Akca. The head of state is provoking the PKK in the hope that it will hit back. Any retaliatory attacks could damage the reputation of the HDP, says Akca, because the party does indeed maintain close ties with the PKK.

On 28 July, Erdogan called for the parliamentary immunity of HDP leader Selahattin Demirtas and other leading party functionaries to be lifted. "Anyone with links to terrorist organisations must pay the price for this," said Erdogan. 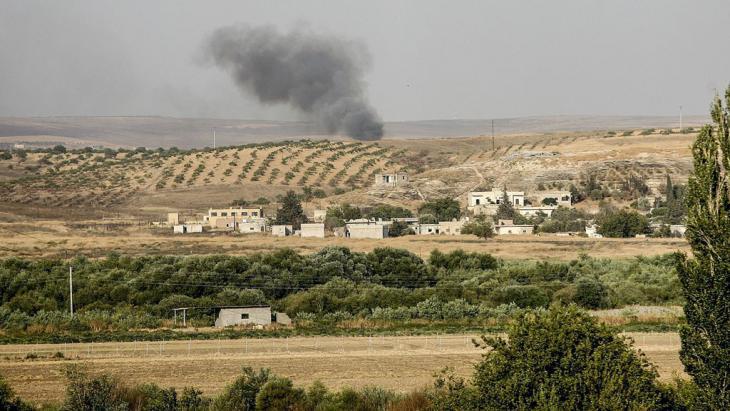 Establishment of an "IS-free" security zone: media reports say that Turkey and the US have agreed on a military co-operation in which US fighter jets, moderate Syrian rebels and the Turkish military will work closely together. It is hoped that the security zone will enable 1.7 million civil war refugees to return home to Syria from Turkey

In advance of all this, it had for a long time appeared as though there could be a rapprochement between the Turkish government and the PKK. A number of reforms were introduced for the benefit of the Kurds during Erdogan's time as prime minister. Negotiations were begun with PKK leader Abdullah Ocalan and after a diplomatic freeze lasting decades, Ankara and Damascus began talking again.

In fact, Erdogan and Assad got along so well at the time that the Turk referred to the Syrian as a "brother". The families of the two politicians even spent a few days together on holiday in the Turkish seaside resort of Bodrum. Visa requirements between the two nations were lifted; the cabinets held joint meetings.

When in March 2011 Syrians thronged the streets in peaceful protest against the Baath dictatorship, Erdogan initially tried to persuade Assad to implement reforms. The latter did indeed make pledges that Erdogan publicly praised – only to find that Assad didn't keep those promises. Ankara has been among Assad's most vociferous opponents ever since. In return, Damascus now accuses Erdogan of supporting terrorists.

Amidst the confusion of war, an autonomous Kurdish region took shape in the north of Syria, named "Rojava" (West) by the Kurds. This is a region that extends almost 600 kilometres along the Syrian–Turkish border in the border zone between Syria, Iraq and Turkey. Erdogan, who appears to be more fearful of Kurdish efforts to achieve independence than the IS jihadists, made it clear that he would never tolerate a Kurdish state. 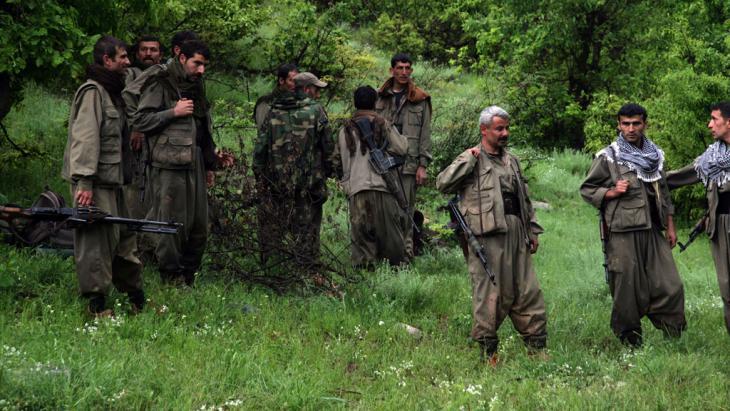 Turkish airstrikes on the PKK: the Turkish military has also begun attacking positions held by the Kurdistan Workers' Party (PKK), classified as a terrorist organisation by the US and the EU. The Turkish leadership fears the foundation of a Kurdish state along the border to Syria

When IS overran the Kurdish city of Kobani on the Turkish–Syrian border last autumn, Ankara did nothing to stop the extremists' actions. The AKP government's "open border policy" was blamed for helping to bolster IS and weaken the Kurds. Erdogan was also accused of ignoring the danger presented by IS, in the hope of an imminent end to the Assad regime.

Anyone making any public assertion to this effect drew Erdogan's ire. When the US daily "New York Times" suggested in September 2014 that the AKP was supporting IS, the Turkish President angrily dismissed the claims as lies.

After the Turkish daily "Cumhuriyet" – a publication that has long been critical of the government – published a video in late May purporting to show an arms shipment from the Turkish intelligence agency to IS jihadists in Syria in early 2014, public prosecutors launched a criminal investigation into the paper's editor-in-chief Can Dundar. As Dundar informed his followers on Twitter, the charges of espionage and spreading terrorist propaganda were filed by none other than Erdogan himself.

But Erdogan's tactic of sitting back, looking away and locking away has ceased to be effective since the attack on the Turkish city of Suruc, which left 32 dead. As well as the threat presented by IS, the group thought to be responsible for the attack, and the fear of the Kurds, the sobering result of the parliamentary poll has caught up with the president.

The fact that NATO assured Turkey of its full political support on 28 July and that NATO Secretary General Jens Stoltenberg spoke of "strong solidarity" with Turkey without any criticism of the revocation of the peace process with the PKK, has further consolidated Erdogan's position. The president has already announced that Turkey will continue its military operations against IS and the PKK "with determination", adding that a "step back" is out of the question.

Any reconciliation between Turkey and Syria’s Assad regime would have disastrous consequences for many Syrians, explains Syria expert Kristin Helberg END_OF_DOCUMENT_TOKEN_TO_BE_REPLACED

Iraq bears the scars of decades of conflict and has seen its antiquities plundered, yet the House of Manuscripts' collection has managed to survive END_OF_DOCUMENT_TOKEN_TO_BE_REPLACED

As Syrian camps housing families of Islamic State fighters get more dangerous, there are calls to bring children out, even if the mothers don't want to go. The idea of separating ... END_OF_DOCUMENT_TOKEN_TO_BE_REPLACED

Morocco has taken the 2022 World Cup by storm, with the northwest Africans reaching the semi-finals for the first time in their soccer history. As the knockout match approaches, ... END_OF_DOCUMENT_TOKEN_TO_BE_REPLACED

The Islamic Republic has been unable to quell the civil unrest that erupted three months ago, after Mahsa Amini died after being detained for violating hijab rules. Now the ... END_OF_DOCUMENT_TOKEN_TO_BE_REPLACED

The Kurds are under attack from two sides: from Turkey, and from Iran. The situation in their territories in northern Iraq is becoming increasingly desperate. Birgit Svensson ... END_OF_DOCUMENT_TOKEN_TO_BE_REPLACED
Author:
Cigdem Akyol
Date:
Mail:
Send via mail

END_OF_DOCUMENT_TOKEN_TO_BE_REPLACED
Social media
and networks
Subscribe to our
newsletter