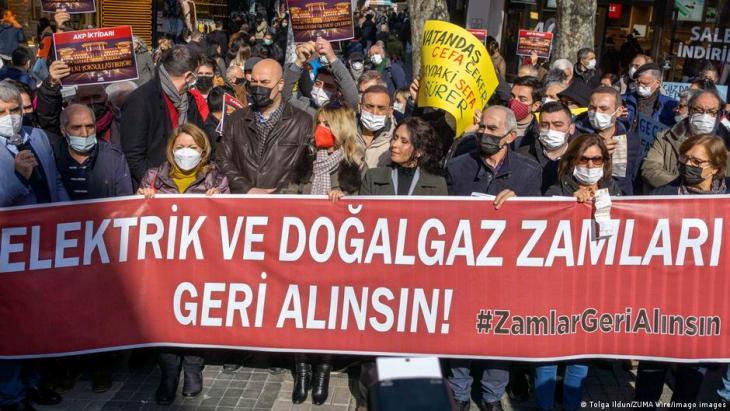 Despite the economic crisis and Turkey's increasingly undemocratic track record, surveys show the ruling AKP is still the party of choice. So what exactly is holding back the opposition? Ayse Karabat reports from Istanbul

March 2022 saw the release of Turkey’s official annual inflation rate. The figure – 61 percent – was met with disbelief by many Turkish citizens, including Baki Ersoy, MP for the Nationalist Movement Party (MHP). Like many Turks, Ersoy complained about the recent price hikes, saying the government should stop turning a blind eye to reality. Consequently, he was forced to resign from the MHP, a staunch ally of President Recep Tayyip Erdogan's ruling Justice and Development Party (AKP).

The official inflation rate produced by The Turkish Statistical Institute (TUİK) was directly countered by the Independent Inflation Research Group (ENAG). This group of prominent independent Turkish economists found the country's annual inflation in March to be 142 percent. ENAG could face serious repercussions for challenging the official figures. An AKP bill proposing imprisonment for those who publish alternative statistics without using TUİK-approved methodology is currently awaiting ratification.

Yet other parameters are also indicative of growing fatigue towards Erdogan's government. The official unemployment rate is over 10 percent, more than 1,400 doctors have left the country due to poor working conditions and the tally of femicides continues to grow by the day. A recent survey conducted by Yeditepe University and polling company MAK revealed that 64 percent of young people aged between 18 and 29 want to leave Turkey because they see little hope for the future.

Other polls suggest, however, that the AKP, which has been in power since 2019 and has seen its popularity wane, is still some four to five points ahead of the main opposition Republican People’s Party (CHP). 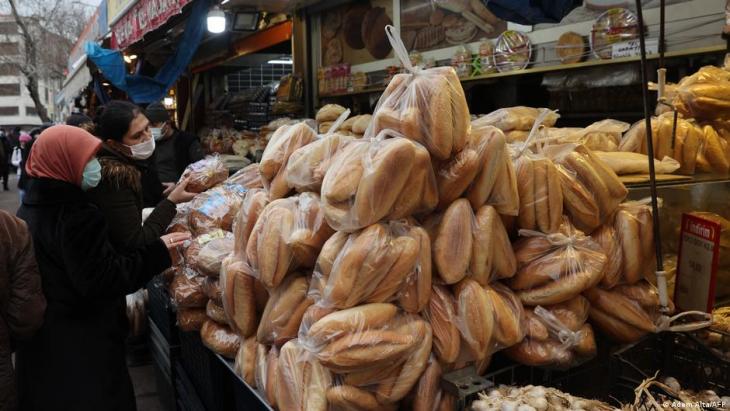 Plenty of reasons not to vote AKP: ENAG – Turkey's Independent Inflation Research Group – found Turkey's annual inflation in March to be 142 percent, more than double the official figure issued by government body TUIK. Unemployment is officially running at over 10 percent, more than 1,400 doctors have left the country due to poor working conditions and the tally of femicides continues to grow by the day. One recent survey revealed that 64 percent of young people aged between 18 and 29 want to leave Turkey because they see little hope for the future

From identity- to class-based politics

Turkey is a highly polarised society, based largely on differing identities and lifestyles. This is also reflected in the population's voting behaviour. Regardless of income levels, most conservative, religious citizens and some nationalists vote for the AKP and its ally, the MHP, while citizens with secular ideas and modern lifestyles support the opposition, dominated by the CHP. This societal division dates back to the founding of modern Turkey in 1923.

The CHP, established by the founder of the republic Mustafa Kemal Ataturk, supported a headscarf ban in the 1990s and early 2000s in public spheres and universities. In 2010, it was the AKP that lifted the ban. The ruling party remains adept at reminding the public about former grievances caused by the CHP. Leader of the opposition Kemal Kilicdaroglu has even criticised his own party’s past mistakes – such as the headscarf ban – several times.

He has also acknowledged mistakes made by the Turkish state, including harsh taxes imposed on non-Muslim minorities during the early decades of the republic, in which many believe the CHP to have been complicit. When and if his party comes to power in the next election, Kilicdaroglu has promised reconciliation and acknowledgement regarding those events. He has not, however, provided any details as to how his party intends to go about this. 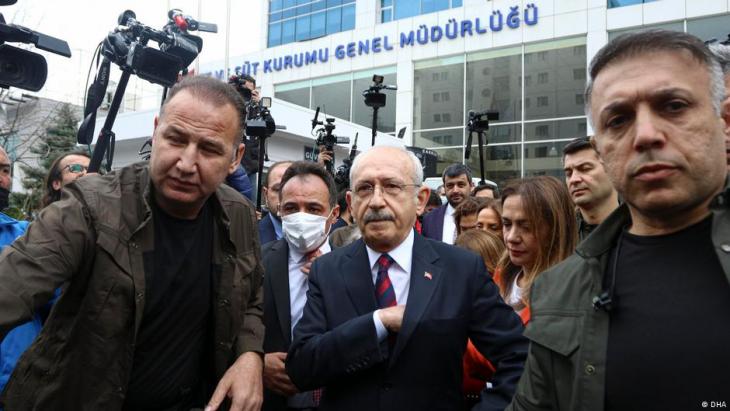 How to unite the country? Turkey has a history of polarisation along cultural, religious and ideological lines. Despite pleading for an end to politics based on fuelling division and preaching reconciliation, CHP leader Kilicdaroglu must offer more than solidarity with the working class. Committing to ongoing social support for the vulnerable and a 'strengthened parliamentary system' is a good start

On the other hand, it remains hard to assert that switching to the CHP and its leader, Kilicdaroglu, whose Alevi origins mark him out as a member of a historically persecuted Shia sect, will be easy for low-income conservatives. For his part, Kilicdaroglu is careful not to mention his Alevi or Kurdish origins, preferring to demonstrate his solidarity with the people on class issues, such as unpaid bills, rather than identity.

On 20 April 2022, Kilicdaroglu began a week of sitting in the dark in his flat in Ankara. His electricity had been cut off after he refused to pay his bills in protest over the 127 percent increase in electricity prices. He said he wanted to stand in solidarity with the 4 million Turkish households that were reportedly unable to pay their electricity bills last year.

Things are no different when it comes to gas. Prices increased by 93 percent last year; more than 1 million households were unable to pay their bills. In response, the government introduced state gas relief: more than 200,000 households applied for it within the first three days. This new social benefit comes on top of an estimated 22 million people who already rely on the state. The AKP is particularly proud of the increases in social benefits it has achieved since coming to power in 2002. The opposition, however, claims that citizens would not have to rely on the state were the right economic policies in place.

Some are afraid that if the AKP loses power, they could lose their benefits. They also fear losing their jobs in the public sector. There is a widespread belief that to secure public sector employment, which accounts for six million of the country's 22 million jobs, you need good connections.

The CHP is trying to convince people that both these fears are groundless. After all, when the opposition party won local elections in Ankara and Istanbul in 2019, staff recruited by the former AKP authorities were neither sacked nor replaced. CHP municipalities have also introduced social support programmes such as "pending invoices", a website where families in need upload their bills for volunteers to pay.

Such efforts have been welcomed by the public, but the CHP-led opposition has yet to publish a comprehensive economic agenda, explaining how it intends to improve the situation. Just one more reason why voters aren’t jumping on the CHP bandwagon, even if they are unhappy with the current government. Various polls have revealed that some 20 percent of those eligible to vote remain undecided. 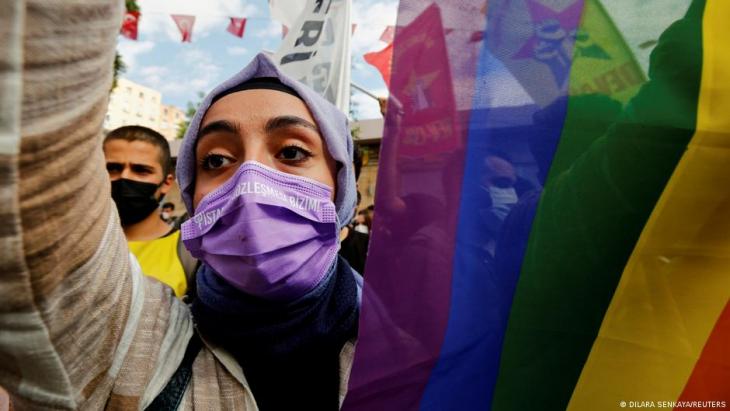 Don't ignore the Kurdish HDP: bearing in mind Erdogan's AKP still enjoys a maximum five point lead over the opposition in the polls, failure to involve the Kurds in any election campaign is likely to end in defeat. With a ten percent share of the vote, the HDP and its voters deserve to be taken seriously – particularly if the CHP is in earnest about reconciliation within Turkey

The CHP and five other opposition parties – the "Nation Alliance" – agree that the main reason for Turkey's current problems is the presidential system, introduced in 2018 after a constitutional referendum. The alliance’s key pledge so far is to change the system to what they call a "strengthened parliamentary system".

This foresees stripping the presidential office of its wide-reaching powers, effecting a separation of the executive. The opposition is also promising to install an independent judiciary, with checks and balances to ensure politically motivated rulings are outlawed.

Although the Nation Alliance’s leaders assured the public they would continue to act together to defeat the ruling AKP, they are still excluding the Peoples’ Democratic Party (HDP), which attracts around 10 percent of the votes, mostly from Kurdish-populated areas. The government, especially the MHP, is attempting to criminalise the HDP, many of whose elected mayors and MPs have been jailed. The opposition's hesitation when it comes to including the HDP is preventing them from reaching another 10 percent of voters at least – a crucial margin if they want to defeat the AKP.

Meanwhile, the war in Ukraine has boosted President Recep Tayyip Erdogan’s approval rating, which had been declining steadily. The public believes his diplomatic efforts towards regional peace and stability are valuable during such turbulent times.

The opposition has yet to present a joint presidential candidate. They say they will decide once a date for the election has been announced. But by the time a date is set, it may be too late for the opposition to campaign – and what momentum they had may be irrevocably lost.

Many Turks are dissatisfied with the international status of their country. At the same time, opinion polls reveal great scepticism among the Turkish population towards the USA. ... END_OF_DOCUMENT_TOKEN_TO_BE_REPLACED

The German government is planning to legalise cannabis before the end of this legislative period. So what does Islam have to say about its consumption? Will changing the law alter ... END_OF_DOCUMENT_TOKEN_TO_BE_REPLACED

Russia's ranking on the World Press Freedom Index has fallen again over the Kremlin's wartime censorship of the Ukraine conflict. From Myanmar to Mexico, journalists continue to ... END_OF_DOCUMENT_TOKEN_TO_BE_REPLACED

From the Euphrates to the Mekong, dams that ensure one country's water supply risk leaving others parched. But shared water resources can be a source of peace as well as conflict ... END_OF_DOCUMENT_TOKEN_TO_BE_REPLACED

For over fifty years, British photographer Peter Sanders travelled across the Middle East and further afield, seeking out the saints of Islam. His work uncovers a little-known ... END_OF_DOCUMENT_TOKEN_TO_BE_REPLACED
Author:
Ayşe Karabat
Date:
Mail:
Send via mail

END_OF_DOCUMENT_TOKEN_TO_BE_REPLACED
Social media
and networks
Subscribe to our
newsletter