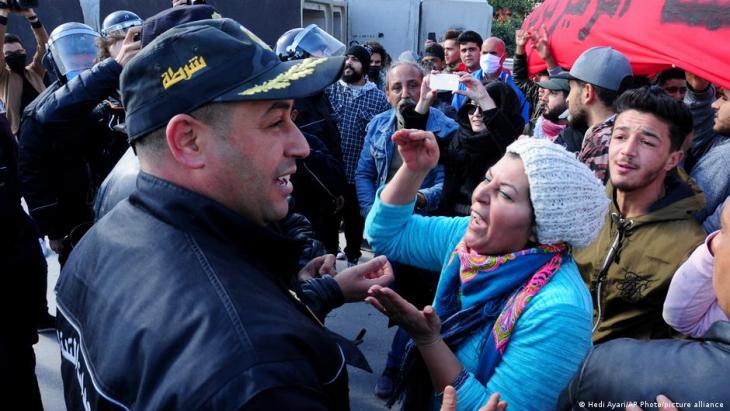 Tunisia’s food situation is looking increasingly precarious. The country relies on large volumes of subsidised imports to ensure sufficient, as well as affordable, quantities of bread for its citizens. Russia's invasion of the Ukraine is set to hit pockets hard. By Hamza Meddeb

The Ukraine conflict has led to a sharp increase in global energy and wheat prices, exacerbating Tunisia’s fragile economic situation. Tunisians had already been suffering from delays in the payment of public-sector salaries and shortages of wheat, medicines, sugar, and sunflower oil. These were caused by a crisis in the country’s public finances, which is becoming increasingly difficult to manage. The rise in food and energy prices could spark social anger, which may destabilise Tunisia further. The country has been mired in political uncertainty since last July, when President Kais Saied seized power, dismissed the government and suspended parliament and the constitution.

The economic impact of the war in Ukraine came on top of rising food prices caused largely by post-COVID-19 supply chain disruptions. Between April 2020 and December 2021, the price of wheat increased by 80 percent, making the situation unsustainable for many Tunisians. Wheat surged above $12 per bushel earlier this month, a level not seen since March 2008, representing a 44 percent increase since the start of the Russian invasion of Ukraine. Even more dramatically, the war is also threatening Tunisia’s wheat supply. Tunisia imports 50 percent of its wheat from Russia and Ukraine. The trade minister tried to appease the population by announcing that there were enough wheat reserves until June.

The price of crude oil has also increased, by an additional 40 percent, further deepening the budget deficit. In preparing the state budget for 2022, the authorities had forecast that a barrel of oil would cost $75, whereas the price of a barrel of Brent crude was at around $130 on March 9. This is roughly double the price that it was at the same period a year ago.

The precarious state of Tunisia’s food situation stems from the agricultural sector’s inability to produce enough wheat. Local production covers barely half of the country’s domestic demand. Tunisia relies on large volumes of subsidised imports to ensure sufficient, as well as affordable, quantities of bread for its citizens. Before the Ukraine war, the subsidy budget was estimated at 15.4 percent of total spending for 2022. With prices increasing, the food crisis could become even more acute as Tunisia has been delaying payments for its food imports.

Just after I shared this @Ghaya_BM tweeted this update, reporting outside Kariouan. We've seen similar turmoil re: rising costs & food shortages in Tunisia's peripheral towns for weeks, but it's increasingly affecting Tunis & other major cities too. https://t.co/axioGJ5zAK

This situation has the potential to become explosive. Bakeries have started rationing bread and the price has already risen by 25 percent over the past two months at non-subsidised bakeries. The price of subsidised bread has profound political implications, so the government has so far refused to change it. However, in aiming to reduce the subsidy bill, the authorities have announced that they would implement a price adjustment mechanism for energy, raising fuel prices by 3 percent each month starting from March.

Nor will Tunisia’s problems stop there. At the beginning of the year, the forecast for inflation in 2022 was estimated at 6.8 percent. The Ukraine conflict will inevitably push it up to around 8 percent, according to some economic analysts. The depreciation of the Tunisian dinar vis-à-vis the U.S. dollar is raising the import bill, and the need for hard currency is extremely pressing at a time when Tunisia cannot access international financial markets and is negotiating a new program with the International Monetary Fund (IMF).

Pressure from the IMF

Beyond its effect on the price of bread and energy, the uncertainty and turmoil brought on by the war in Ukraine will likely affect the government’s political agenda and negotiations with the IMF over a new loan. The government is suspending agreements to increase public-sector wages and squeezing essential spending on health, education, and public investment in order to preserve scarce financial resources to service the debt and import food and energy.

Tunisia plans to borrow 20 billion dinars (around $7 billion) in 2022. In order to meet its financial needs, the government has to secure 12.6 billion dinars ($4.2 billion) on international markets, according to the budget for 2022. However, the capacity to ensure funding for the budget depends on reaching an agreement with the IMF, which is far from being a done deal. After months of discussions, which were interrupted and resumed a few months after Saied’s power grab, the prospects of reaching an agreement are still uncertain. 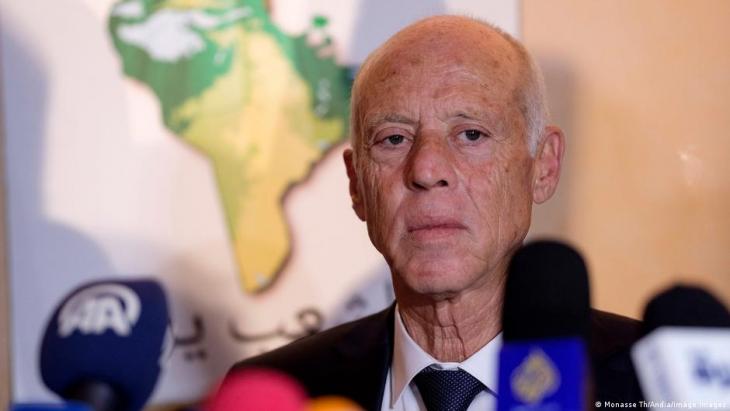 "The success of Saied’s plan to change the constitution and replace the current political system with a presidential system that strips parliament of its prerogatives rests on his capacity to gain the support of a large segment of the population," writes Hamza Meddeb. "Increasing food prices will certainly not help in this regard. At the same time, refraining from increasing prices will hardly be sustainable from a budgetary perspective. For now, Saied has focused on blaming speculators and greedy traders, overlooking Tunisia’s harsh reality. Such an approach will not resolve any of the country’s problems – and Tunisians know it!"

In his last interview before leaving Tunisia, Jerome Vacher, the IMF’s representative in Tunis, noted that Tunisia "needs deep, structural reforms, that have to be communicated to the population". In a document sent to the IMF in late 2021, the government committed to freezing public-sector wages as well as gradually lifting subsidies. However, these measures have always been rejected by the main labour union, the Union Générale Tunisienne du Travail (UGTT). The union’s opposition will likely gain in strength, given Saied’s refusal to consider its offer to organise a national dialogue on social issues.

Seven months since concentrating power in his hands, Saied is caught between a rock and a hard place. Tunisia’s poor public finances are depriving him of the necessary resources to maintain the support base that had initially championed his move. An agreement with the IMF will require unpopular measures that include freezing wages and increasing food and energy prices further. And yet, the success of Saied’s plan to change the constitution and replace the current political system with a presidential system that strips parliament of its prerogatives rests on his capacity to gain the support of a large segment of the population.

Increasing food prices will certainly not help in this regard. At the same time, refraining from increasing prices will hardly be sustainable from a budgetary perspective. For now, Saied has focused on blaming speculators and greedy traders, overlooking Tunisia’s harsh reality. Such an approach will not resolve any of the country’s problems, and Tunisians know it. A survey released in January showed that over 60 percent were pessimistic about their country’s future.

Hamza Meddeb is a non-resident scholar at the Malcolm H. Kerr Carnegie Middle East Center, where his research focuses on economic reform, political economy of conflicts and border insecurity across the Middle East and North Africa.

Sultana Khaya, 41, has been peacefully resisting the Moroccan occupation of Western Sahara for many years. Because of her campaign to assert the self-determination of the Sahrawi ... END_OF_DOCUMENT_TOKEN_TO_BE_REPLACED

Back in 1995, when The Times asserted Islam was to blame for the poor levels of education among women in the Muslim world, Mohammad Akram Nadwi began scouring ancient Arabic ... END_OF_DOCUMENT_TOKEN_TO_BE_REPLACED

Since Spain abandoned its traditional neutrality towards the conflict in Western Sahara, Morocco has announced a "new phase" in relations between the two countries. But what is ... END_OF_DOCUMENT_TOKEN_TO_BE_REPLACED

Tunisia's president has been carrying out a coup by degrees, demolishing the country's hard-fought democratic gains bit by bit. With an economy in turmoil and a splintered ... END_OF_DOCUMENT_TOKEN_TO_BE_REPLACED

The German government is planning to legalise cannabis before the end of this legislative period. So what does Islam have to say about its consumption? Will changing the law alter ... END_OF_DOCUMENT_TOKEN_TO_BE_REPLACED

An increasing number of government ministries in Algeria are announcing they will abandon French in future. They may be reacting to the mood among the population, but the move is ... END_OF_DOCUMENT_TOKEN_TO_BE_REPLACED
Author:
Hamza Meddeb
Date:
Mail:
Send via mail

END_OF_DOCUMENT_TOKEN_TO_BE_REPLACED
Social media
and networks
Subscribe to our
newsletter