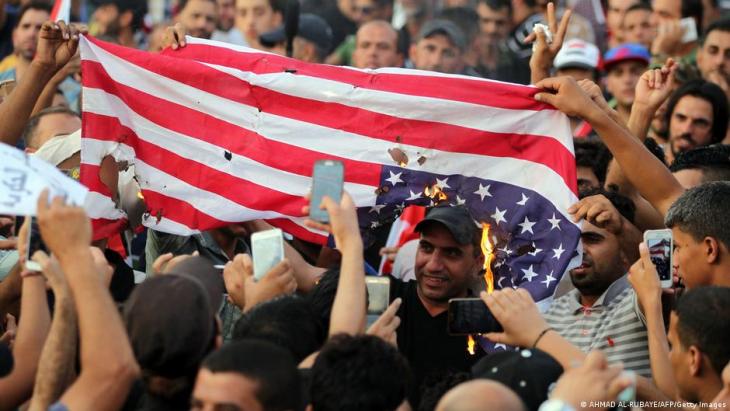 A wide network of official and unofficial outlets and social media in Arabic parrot pro-Russian talking points about Ukraine. They are often lies, yet somehow the reports still appeal to people in the Middle East. By Cathrin Schaer and Emad Hassan

"Dear Mr. Medvedev, every Russian victory gives us hope," members of an Iraqi militia wrote in an open letter to the former Russian president in mid-August. "Russia is the sword of vengeance that brings justice to all who suffered from the self-proclaimed masters of the world. Much of the globe is waiting for Russia's unconditional victory," the Iraqis proclaimed on Sabereen, a Telegram channel focused on Iraqi news and politics that has a quarter of a million followers.

That anybody outside of Russia would be waiting for a Russian victory may sound unlikely, even surprising, to the majority of Europeans and Americans who have condemned that country's invasion of Ukraine. However, it's quite possible that for a lot of people in the Middle East, the Iraqi letter writers have a point. 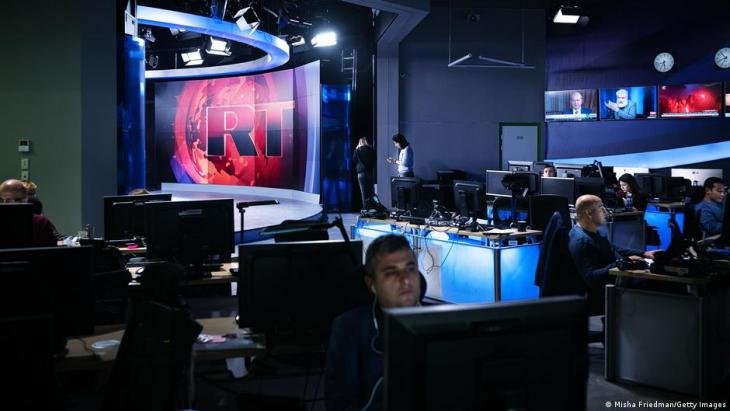 Winning the information war: examples of Russian propaganda in Arabic are not hard to find, researchers say. For example, there are plenty of false reports in Arabic about the Ukrainian President Volodymyr Zelensky fleeing his country, how Russia protects civilians in the war zone and why the U.S. and EU are actually responsible for the global wheat crisis. The overarching – and untrue – narrative is always that Russia is not responsible

Everyone knows about Russian disinformation that targets English speakers, Nadia Oweidat, a professor who researches digital activism in the Arab world, pointed out recently in an analysis for the Washington Institute for Near East Policy. "However, most Westerners do not realise that there is an equally – if not more dangerous – Arabic-language propaganda campaign currently working to warp public perceptions of Russia's war in Ukraine," she wrote

"The Russians are definitely winning the information war," said Mahmoud al-Khitabi, a Syrian refugee who now lives in France. "In Syria, the pro-regime people [supporters of the authoritarian government headed by Bashar Assad] all believe the U.S. is firing rockets into Russia and Russia is just defending itself. A lot of people in Europe don't even realise this [Russian messaging] is happening. There's a complete disconnect," he said.

Russia is 'not responsible'

Examples of Russian propaganda in Arabic are not hard to find, researchers say. For example, there are plenty of false reports in Arabic about the Ukrainian President Volodymyr Zelensky fleeing his country, how Russia protects civilians in the war zone and why the U.S. and EU are actually responsible for the global wheat crisis. The overarching – and untrue – narrative is always that Russia is not responsible for the war in Ukraine. 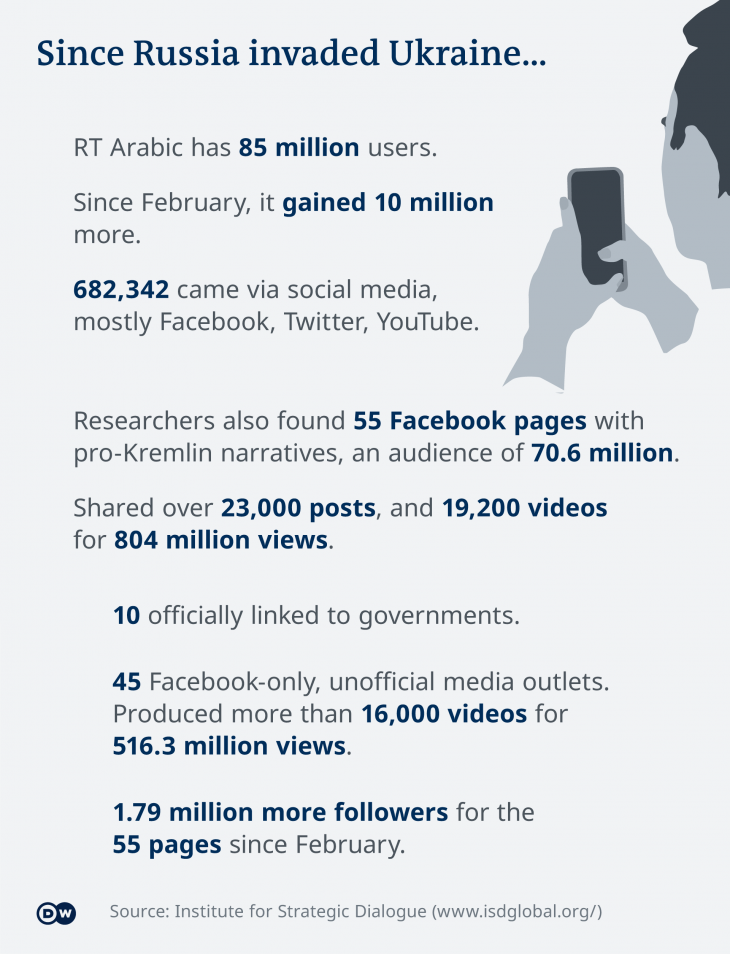 Ukraine conflict – Russia Today’s popularity boost: exact numbers on RT's popularity with Arabic speakers is hard to gauge, but it is usually one of the five most popular broadcasters in the region, up there with Al Jazeera, Al-Arabiya and Sky News Arabia. It regularly outperforms Arabic offerings from Western media outlets. Recently though, RT Arabic has consistently been doing better than all of those, said Moustafa Ayad, director of the Africa, Middle East and Asia section at the London non-profit Institute for Strategic Dialogue

Some of this messaging appears to originate from Russian state-funded media outlets working in Arabic, like Russia Today, more commonly known as RT.

RT was registered as a "foreign agent" by the U.S. in 2017 and in March this year, EU member states agreed to suspend all local broadcast licences for RT because of "systematic information manipulation and disinformation" that poses a threat to the EU's stability. But RT Arabic has not been banned.

RT's popularity with Arabic speakers is hard to gauge, but it is usually one of the five most popular broadcasters in the region, up there with Al Jazeera, Al-Arabiya and Sky News Arabia. It regularly performs better than Arabic offerings from Western media outlets.

Over the past three months though, RT Arabic has consistently been doing better than all of those, said Moustafa Ayad, director of the Africa, Middle East and Asia section at the Institute for Strategic Dialogue, or ISD, a London-based non-profit that monitors online extremism, among other things.

RT Arabic is often echoed by other state agencies like the Syrian News Agency (SANA) and China's CGTN Arabic, explained Ayad. But far more important than any media outlets clearly affiliated with the Russian state are Facebook pages and other online organisations that are not, he pointed out. 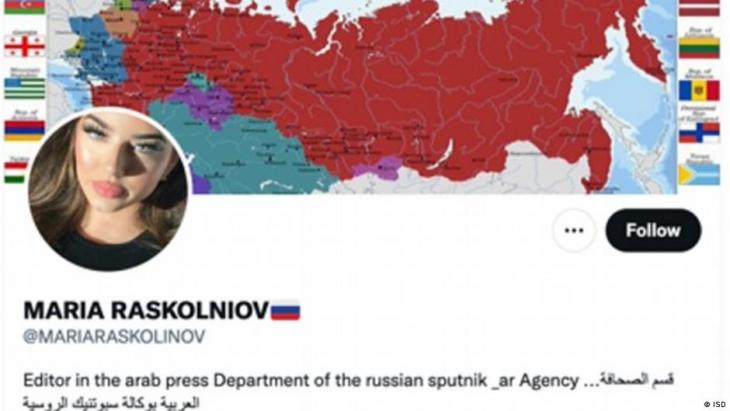 "The Arabic language pro-Kremlin digital ecosystem is a mixture of official state media and unofficial, branded media organisations," he continued. "It's important to look beyond state-affiliated agencies to the impact of Facebook-only media outlets which are sharing, repurposing and rebranding RT and Sputnik content. These are entities that exist solely on social media platforms, are typically not accredited news agencies, but play a role in spreading pro-Kremlin content."

The ISD has even previously found social media accounts with hundreds of thousands of followers that are run by what they call "attractive Kremlinistas", Russian women who post pro-Russian stories in Arabic. The accounts and pictures are fake but, as the ISD wrote, "male audiences across the Middle East and North Africa eat it up". Most of the accounts the ISD highlighted have since been suspended.

These sorts of supposedly non-affiliated users and outlets, stretching across all social media platforms, get twice as much attention as any official media, Ayad stressed.

Why do the lies appeal?

The narratives they peddle tend to resonate with Middle East audiences for a number of reasons.

One is circumstantial. Locals in countries with authoritarian governments don't often trust their own state-sponsored media and rely more on news reports shared via social media. Research by the Washington-based Middle East Institute suggests Russian outlets and their proxies are far more active on social media than U.S. or European media working in Arabic. For example, RT Arabic posted twice or three times as much as Al Jazeera or the BBC, they found.

Methodology: top "overperforming" posts — meaning they are getting more engagement than the page's posts usually would — from Russian state media, over the last 6 hours, based on @crowdtangle data. pic.twitter.com/dzO81w9T9C

There are also political and historical reasons.

In a 2021 report for the George C. Marshall European Center for Security Studies, analysts summarised 10 main ways in which Russia tried to influence international messaging around its foreign policy. Their research was undertaken in 2019, but more recent work by the ISD indicates that some of the most commonly used tactics are now being applied to the Ukraine war.

For example, one theme that appeals to Middle Easterners is that Russia stands "against outside intervention in a country's sovereign affairs", as the Marshall Center report puts it. That's something locals in Iraq, whose country was invaded by the U.S. in 2003, can relate to.

The Telegram channel Sabereen, where the open letter to the former Russian president was published in mid-August, is run by Iran-allied militias, who are still enraged about the January 2020 assassination of Iranian general Qassem Soleimani by the U.S. in Baghdad. 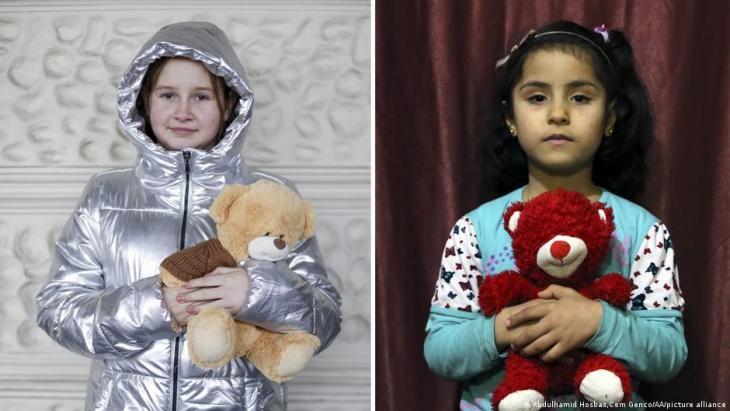 A refugee policy fraught with double standards? The impression that Europe’s asylum system prefers white, Christian applicants over Muslims and People of Colour has only been reinforced by the EU’s reaction to the flood of Ukrainians seeking refuge. "It's actually about protest," said Yasser Abdel Aziz, a media analyst based in Cairo. "There are large sectors of the Arab public who believe Western media is biased and that the West, in general, is biased against Arabs and Islam. There's a lot of bitterness”

Another popular theme is that Russia prefers a multi-polar world as opposed to one dominated by Western interests. This resonates with states, like Saudi Arabia and the United Arab Emirates, who have aspired to more influence at a regional and global level, inserted themselves into conflicts in Syria and Yemen and whose leaders have strong nationalist leanings.

Or, as one pro-Russian Twitter account put it, "not everyone wants to take orders from Uncle Sam".

Although Russian foreign policy narratives are designed to twist reality, Marshall Center researcher Dmitry Gorenburg explained, "one common thread tying these narratives together is that all of them have an element of truth at their core."

"The Kremlin narratives used hypocrisy and the West's involvement in regional colonialism, as well as regional conflicts, as a means to highlight [what Russia sees as] the treacherous and duplicitous nature of Western support for Ukraine," said Ayad.

"It's actually about protest," said Yasser Abdel Aziz, a media analyst based in Cairo. "There are large sectors of the Arab public who believe Western media is biased and that the West, in general, is biased against Arabs and Islam. There's a lot of bitterness," he concluded – and Russia is cunningly exploiting this.

One year ago the Taliban returned to power, seizing Kabul; the U.S. and its allies made a panicked exit from the country. Of all the books written on the subject, four stand out ... END_OF_DOCUMENT_TOKEN_TO_BE_REPLACED

Unflattering terms were used at a German Football Association human rights congress aimed at "intensifying the discussion" ahead of the World Cup. One speaker in particular made ... END_OF_DOCUMENT_TOKEN_TO_BE_REPLACED

In "Iran. Die Freiheit ist weiblich", journalist Golineh Atai describes the dogged resistance of courageous Iranian women against the Islamic Republic and the mullahs who have ... END_OF_DOCUMENT_TOKEN_TO_BE_REPLACED

Egyptian authorities have Mada Masr in their sights once again after critical reporting. But the editor of the country's last independent news source is adamant they will continue ... END_OF_DOCUMENT_TOKEN_TO_BE_REPLACED

Like Christianity, Europe's history is one of migration. Both have strong roots in the Orient and in cultures thousands of years old. Cultural historian Bernhard Braun invites us ... END_OF_DOCUMENT_TOKEN_TO_BE_REPLACED

Russia is leaving no stone unturned in its attempts to make the Islamic Republic an ally in the war against Ukraine. Fortunately for Vladimir Putin, the mullahs in Tehran are ... END_OF_DOCUMENT_TOKEN_TO_BE_REPLACED
Author:
Cathrin Schaer & Emad Hassan
Date:
Mail:
Send via mail

END_OF_DOCUMENT_TOKEN_TO_BE_REPLACED
Social media
and networks
Subscribe to our
newsletter