Skip to main content
UN Missions on the Golan Heights

It is one of the oldest and most successful UN peacekeeping missions, yet an almost forgotten one: the United Nations Disengagement Observer Force, UNDOF, stationed on the Golan Heights, supervises the ceasefire between Syria and Israel. Arian Fariborz reports 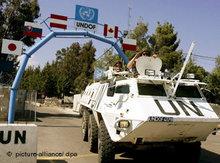 The UNDOF Zone was established in 1974. At the end of 2008 the mandate of the "United Nations Disengagement Observer Force" will be extended for an estimated period of another six months

​​ Recently the Golan Heights came into world focus again after details emerged of secret negotiations between Syria and Israel under Turkish mediation, and Israel's out-going Prime Minister Ehud Olmert signalled that he was prepared to hand the Golan back to Syria.

During the Six-Day War Israel besieged the strategically important plateau and annexed it in 1981. For more than three decades, around 1,000 UN Blue Beret troupes have been deployed to supervise the ceasefire between the enemy states and have thus maintained peace, fragile though it is, in one of the world's most conflicted regions.

Duties of the peacekeeping mission 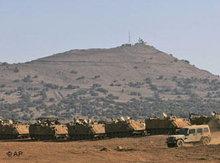 Israeli tanks on the Golan Heights: The Heights were undisputed Syrian territory until Israel captured the strategically important region on 9-10 June 1967 during the Six-Day War

​​ The United Nations Disengagement Observer Force (UNDOF) consists of a total of 1,043 troupes from six different nations, whereby the Austrian battalion (AUSBATT) represents the largest contingent of the peacekeeping force. Headquarters are situated at Camp Faouar on Syrian territory.

The UN observer force supervising the implementation of the ceasefire between Syria and Israel on the Golan was established in May 1974 based on Resolution 350 of the Security Council. It is deployed to supervise and monitor the area of separation between the Golan Heights, annexed by Israel, and a part of Syrian territory – a small area some 80 kilometres long that stretches from Mount Hermon in the north to the Yarmuk River in the south.

​​ "The mission of UNDOF is to basically supervise the implementation of the ceasefire agreement from 1974," says Major-General Wolfgang Jilke, force commander of the UN troupe.

"We have an Area of Separation, the narrow zone between both rival parties, which, according to the mandate, is to be kept free of military troupes; only UN forces are allowed to enter this zone. Either side of the Area of Separation is the so-called 'Area of Limitation' – these are zones that are 10, 20 and 25 kilometres wide respectively. In these areas we make sure that the limitations of equipment and forces are being followed."

The fatal legacy of war 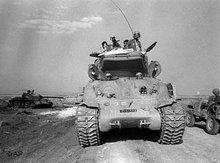 In the battlezone: The Golan Heights were successfully defended by Israeli troops in the 1973 Yom Kippur War, though a portion was later returned to Syria

​​ Additionally, the UNDOF team responsible for the clearance of mines ensures security on the patrol paths on the Golan. Decades after the Six-Day War of 1967 and the Yom Kippur War of 1973 the fatal legacies of the still smouldering Arab-Israeli conflict can be found all over the Golan Heights, back then fought over by the Syrian and Israeli armies: anti-personnel mines and anti-tank mines; bombs and grenades.

Manfred Völkl is a Warrant Officer in the Austrian military and currently acting commander of the so-called Explosive Ordnance Disposal team of the Austrian UN battalion on Golan Heights. He explains why the UNDOF is not officially commissioned to work in the field of mine clearance:

"That is not our job; those tasks are only carried out by civil NGOs. For us the most important thing is the UN personnel. But when civilians come to us and report that they have warfare agents in their houses or gardens, of course we dispose them." Even today civilians continue to get killed when they unwittingly pass the ceasefire lines in the mined region.

Golan as the political apple of discord 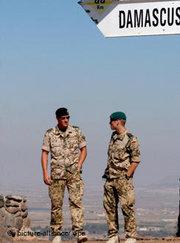 More than thirty years of peacekeeping: UN troops on the Golan Heights

​​ Although the conflict between Syria and Israel about the political apple of discord that is Golan still exists, at least peace has been secured between the two arch rivals along the ceasefire line – a success that is ultimately due to the work of the UN peacekeeping forces.

Crossfire along the border or attacks that could have resulted in the serious military conflicts of both camps have not occurred since the implementation of the UNDOF mandate.

However the UN force has had no control over the tearing apart of families on the Golan due to war and demarcation lines. In his film The Syrian Bride the prominent Israeli film director Eran Riklis shows how a daughter from a Druzian family living on the Israeli-occupied part of the Golan marries a distant Syrian relative on the other side of the border fence – knowing that she will never be allowed to visit her own family in Israel again. 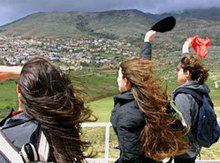 Three Syrian female students are waving hello at their family in Majdal Shams across the border. Majdal Shams is the largest of the four Druze villages in the Golan

​​ These days, however, at least weddings, family meetings and student exchange programmes are possible in the no-man's land between the Israelis and Syrian frontier posts, thanks to the humanitarian aid of the Red Cross in conjunction with the United Nations.

"This runs very smoothly," explains Major General Wolfgang Jilke. "It takes place at the frontier posts, the gates that are under Israeli, Syrian and UN control respectively. It means that whoever wants to return from one side to the other can only do so through these loop holes. The Red Cross organises these very humanitarian acts and we ensure passage between point A and point B."

Through the use of loudspeakers, platforms on the Syrian side have been created, which enable communication between the Syrian population and their family members living on the other side. But this "family shouting place" actually used to have a different function, as Jilke explains:

"It was still possible back then, and the Israelis still allowed both parts of the families living on the Syrian and the Israeli occupied sides to come near the fence. They were allowed physical contact through the fence. But that was stopped by the Israelis for security reasons."

In this way the UNDOF troupes are not only responsible for supervision and keeping peace but also for maintaining a dialogue that goes far beyond borders. Even if it is only about a simple platform for communication made out of concrete and metal.

Interview with Patrick Müller
Golan Heights in Return for Peace
Syria has confirmed that peace talks are currently taking place between Damascus and Tel Aviv. In return for peace, Israel offered the Syrians the prospect of withdrawal from the Golan Heights. But what are the chances that the two sides will actually reach an agreement? Khaula Saleh asked Middle East expert Patrick Müller for his views

Commentary by Avi Primor
The Key to Peace Lies in Damascus
It's now official: Israel and Syria are holding indirect peace talks. A peace agreement between the two countries could break Iran's dangerous influence in the region, says Avi Primor, former Israeli Ambassador to Germany

Interview with Eran Riklis
The Making of "The Syrian Bride"
Eran Riklis' latest film, "The Syrian Bride", deals with a young Druze woman from the Golan Heights who marries a man from Syria. After the wedding, she is not allowed to visit her family in Israel anymore. Interview by Igal Avidan

END_OF_DOCUMENT_TOKEN_TO_BE_REPLACED
Social media
and networks
Subscribe to our
newsletter