Hundreds of minors are stranded in the Spanish enclave. They can neither return to Morocco nor travel on to Europe. Many are hiding out of mistrust of the police. Karin Janker reports from Madrid

They wanted to go to Europe to have a future, but now they are stuck in a situation with no way out. Hundreds of children are stranded in the Spanish exclave of Ceuta, unable for the moment to continue on to Europe or back to Morocco. The local authorities are overwhelmed with their accommodation.

While most of the adult migrants have already been sent back to Morocco in the past few days, such expedited deportation is not allowed in the case of unaccompanied minors. Even for adults it is at the very least controversial. Thus, almost 1,000 children and youths are now in limbo, their subsequent fate completely unclear, writes the online newspaper El Español.

Neither the Spanish government nor aid organisations working on the ground, such as the Red Cross, can currently say when a comprehensive solution will be found for these children and young people, and what that might be. The young people arrived early last week along with thousands of other migrants who took the opportunity of Morocco's open border towards Ceuta to reach Spanish soil. They swam across a strip of Mediterranean Sea and climbed onto the beach on the other side of the multiple fortified border fence with nothing but the clothes they wore on their bodies. 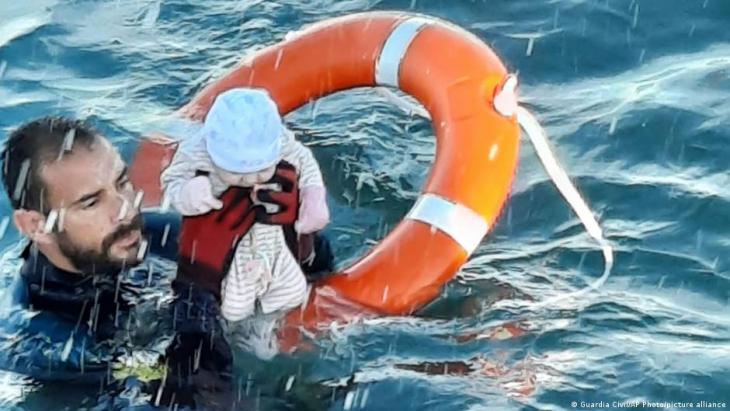 With this picture, diver Juan Francisco Valle became a hero overnight. The people who swam to Ceuta hoped for even the tiniest chance. But hardly any of them will ever make it to Europe. After criticism from Spain for instrumentalising the migrants, Morocco has announced that it will make greater efforts to take back unaccompanied Moroccan children who are in the EU without papers

Observers interpreted the opening of the border as an attempt by Morocco to put pressure on Spain because of the simmering conflict over the territory of Western Sahara. The children, some of whom had apparently followed false messages on the Internet, are now the victims of this brand of politics. For them, there are two options, at least in the medium term: either they can be sent back to their families - but some conditions have to be met for this - or the city of Ceuta continues to be responsible for their accommodation and care. The Spanish and Moroccan authorities are currently working hard to send all those children back to their families who want to return.

There is no time to lose, as the conditions in which the children have been housed in Ceuta are poor, according to observers. "The reception centres in Ceuta are completely overloaded, which is why the children were initially housed in buildings not suited for the purpose," says Catalina Perazzo from the aid organisation Save the Children, which is on site with five helpers. In the first days, photos circulated of old warehouses where children and young people were sleeping on iron shelves. They had to defecate on the bare floor in between, aid workers on site told the newspaper El País. In the meantime, cots have apparently been set up, and neighbours have donated discarded clothes, blankets and food.

Many are hiding for fear of the police

Ceuta's authorities have already received thousands of calls from worried parents looking for their children. The local newspaper Faro de Ceuta publishes on its website photos of missing children sent to it by their families so that the people of Ceuta will help in the search for the children. If children and parents are found by the authorities, family reunification can be initiated, says Perazzo of Save the Children. But in hundreds of cases, months could pass before this succeeds, during which the children would have to be cared for in Ceuta.

And not all of the minors who arrived have reported to the Spanish authorities. Many are hiding out of fear of the police or also because of conditions in the reception camps, says Perazzo, and prefer to sleep on the streets. Recent pictures from Ceuta, a city of 84 000 inhabitants, show small groups of young people who have set up camp in parks or in the hills in the city. They sleep on torn cardboard boxes and eat what neighbours or aid organisations give them.

Some of the young people have probably decided to find a way to reach mainland Europe after all. Bilal, 15, told El País that he had told his parents he was in a reception camp so they would not worry. "My mother wants me to come back, but my father says I should stay so I can have a better life one day."

The Spanish state is not allowed to deport the unaccompanied minors. "Those who cannot be sent back to their families have to be taken in by Spain or Europe," Perazzo said.

So far, however, the Spanish regions have only agreed to take in 200 children and young people who had already been accommodated in Ceuta. These will now be distributed among the individual regions. This should at least create space in the reception camps, where conditions are somewhat better than in those halls that the Spanish press has already described as "warehouses of shame".

Arab women played a leading role in the protest movement of 2011. Since then, ongoing social transformation has had a considerable impact on their lives. What is their assessment ... END_OF_DOCUMENT_TOKEN_TO_BE_REPLACED

Business in the Moroccan city of Tangiers is booming due to its location at the nexus of global trade routes. But many locals are failing to reap the benefits. What they crave ... END_OF_DOCUMENT_TOKEN_TO_BE_REPLACED

Morocco and the European Union are at cross purposes when it comes to the Western Sahara. And, as Germany does not support Moroccan claims to the territory, a major conflict has ... END_OF_DOCUMENT_TOKEN_TO_BE_REPLACED

They’ve already got the Louvre; they’ll soon have a Guggenheim Museum as well – and now the Emirates have added literature to their quest for cultural supremacy in the Arab world ... END_OF_DOCUMENT_TOKEN_TO_BE_REPLACED 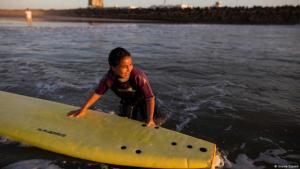 In a small fishing town in Morocco's south, wedged between the Atlantic Ocean and the Sahara, a group of idealistic young surfers are teaching local children to brave the crashing ... END_OF_DOCUMENT_TOKEN_TO_BE_REPLACED

Recep Tayyip Erdogan, disappointed by the European Union’s reluctance to integrate Turkey into its ranks, has re-directed his country’s diplomacy toward the Maghreb and Africa to ... END_OF_DOCUMENT_TOKEN_TO_BE_REPLACED
Author:
Karin Janker
Date:
Mail:
Send via mail

END_OF_DOCUMENT_TOKEN_TO_BE_REPLACED
Social media
and networks
Subscribe to our
newsletter