Unrest in Bahrain
''We are all Bahrainis; Not Sunnis, Not Shiites!''

Although there are more Shiites than Sunnis among the demonstrators, it is neither a purely Shiite revolt nor a Tehran-inspired one, as the government has been claiming

​​"How do you know you are Bahraini? You will be arrested by a Yemeni, tortured by an Iraqi and sentenced by an Egyptian."

This Bahraini joke neatly encapsulates some of the island state's social problems. According to the most recent census in 2010, around 54 per cent of the 1.2 million people living in the Gulf state are not Bahraini citizens.

Many Egyptians are employed in the judicial system; the security forces are largely made up of Pakistanis, along with Yemenis, Jordanians and (Sunni) Arabs of other nationalities. The country's majority Shiite population are denied access to jobs in both the army and the police. Around 80 per cent of the population is Muslim, around 70 per cent of those are Shiite, though no official figures are available.

Releasing such figures would not be in the interests of the ruling Sunni Al Khalifa royal family, whose religious segregation policies have long been a source of conflict. There are decidedly fewer job opportunities available to Shiites than to Sunnis. Higher government positions are reserved for Sunnis, while the infrastructure in Shiite villages is inferior to that in Sunni residential areas.

Since the beginning of the protests in Bahrain on 14 February 2011 – protests that were largely organised via Facebook, e-mail, Twitter and word of mouth – at least six people have died and hundreds have been injured. According to reports from protesters, around 70 people are still missing.

The security forces' brutal crackdown against the protesters has also attracted international condemnation. Eye witnesses have reported how, after brutally dispersing the protesters in Pearl Square on 16 February, the security forces denied access to ambulances and paramedics and instructed doctors and nurses at state hospitals not to treat the injured. 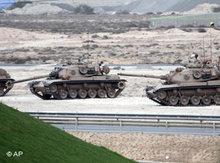 Sending tanks to clear the demonstrators: since protests in Bahrain began, at least six people have died, hundreds have been injured and around 70 are still missing

​​The so-called "Day of Rage" that kicked off the protests coincided with official celebrations to mark the tenth anniversary of Bahrain's "National Action Charter". King Hamad bin Isa Al Khalifa, who succeeded his father in 1999 and came to power promising comprehensive reform, oversaw the adoption of the charter in 2001.

It promised to open up the country to democracy and bring an end to the unrest of the 1990s, which had led to violent clashes between opposition activists and the security forces. Several thousand dissidents were arrested at that time, hundreds were expelled from the country and at least two dozen killed.

Among other things, the 2001 "National Action Charter" promised the reintroduction of an elected parliament, the last one having been dissolved in 1975, as well as the establishment of a constitutional monarchy.

Opposition groups were to be disappointed by the 2002 constitution, however. A two-chamber parliament was set up in which only the members of the second chamber were directly elected, while those in the first chamber were appointed by the king, including the prime minister, ministers and all judges.

In protest, Shiite parties boycotted the elections in 2002. In 2006, however, they decided to participate once more and were, just as in the recent elections in 2010, successful. Currently, the Shiite Jam'iat al-Wifaq al-watani al-islamiyya party has 18 of the 40 seats, two Sunni parties have five seats and the remainder are in the hands of independent candidates.

Conflict is nothing new in Bahrain, and in the Shiite villages in particular, the past ten years have seen recurring outbreaks of violence. The so-called Bandargate Scandal brought turmoil in 2006 when leading ministers were accused of having planned secret operations against the Shiite majority, including attempts to change the country's religious balance by granting naturalisation to Sunnis – an allegation that has refused to go away.

The anti-terror legislation introduced in 2006 has seen many human rights activists as well as members of the opposition arrested, around 250 in the run-up to the 2010 elections. 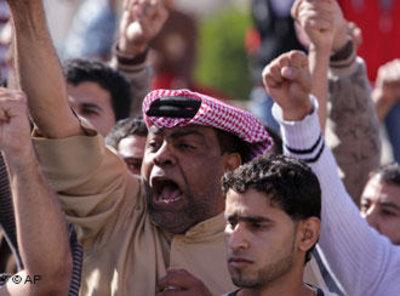 Although demonstrators are not a homogenous group, they have a number of common demands, including – among other things – freedom of speech, freedom of the press, freedom to demonstrate, the release of political prisoners, abolition of religious segregation and an end to gerrymandering

​​Inspiration for the "Day of Rage"

It was events in Tunisia and Egypt that inspired the "Day of Rage". Bahrainis watched very closely and celebrated as Hosni Mubarak's rule was brought to an end in Egypt. Although in their coverage of events in Egypt, the state-run Bahraini newspapers described the demonstrators as troublemakers who were endangering the entire region, obviously very few believed it.

Just before the protests in Bahrain began, the king had promised a gift of 1,000 BD – almost 2,000 euros – to every family. It is a gesture that one of the protest initiators treats with contemptuous disdain – "How could he imagine that we would be silenced by that?"

In contrast to the protests in Egypt and Tunisia, the demonstrators in Bahrain are not out to overthrow the government. What they want to see is the introduction of a constitutional monarchy as promised in the "National Action Charter" with an elected executive and rotation of power as well as political and economic reforms.

Because the opposition is not a homogenous block, different demands are being made. Nevertheless, certain demands are common to all: freedom of speech, freedom of the press and freedom to demonstrate, the release of all political prisoners, abolition of the religious segregation policy, more equitable distribution of electoral districts – thus far biased in favour of Sunni voters – and measures to combat corruption, unfair distribution of wealth, unemployment, low wages and a shortage of housing.

Although there are more Shiites than Sunnis among the demonstrators, it is neither a purely Shiite revolt nor a Tehran-inspired one, as the government has been claiming. The protest slogans included one that went: "We are all Bahrainis – not Sunnis, not Shiite!"

The organisers have urged protesters to guard against the rise of the religious divisions that the protests aim to get rid of. Among those who called for the protests were the Shiite Wifaq party, along with youth groups, human rights activists and non-Shiite Bahrainis, including leftist political groups.

The Iranian influence as a pretext

Although a Shiite – Shiites are frequently portrayed in Bahrain as puppets of Tehran – Sheikh Ali Salman, general secretary of the Wifaq party, has repeatedly stated that his party does not seek to create a religious republic along Iranian lines

​​On 17 February, 19 civil society organisations signed a document demanding that the king should put an immediate end to the violence of the security forces and set up a commission of enquiry.

Accusations of Iran's involvement in the stirring up of dissent have also led to increased religious tensions in the past and have been used to brand any member of the opposition a puppet of the mullahs' regime.

The regime's concern that Iran, which has referred to Bahrain on several occasions as one of its provinces, might be pulling the demonstrators' strings, is shared by the US and Saudi Arabia, the latter having the added worry of a possible influence on its own Shiite minorities.

Member states of the Gulf Cooperation Council are constantly warning of the danger of a "Shiite axis". Bahrain is home to the US 5th Fleet and is, therefore, of strategic importance for America, not only when it comes to keeping an eye on oil shipments in the Gulf, but also on nearby Iran.

During the Iraq War of 2003, Bahrain served as a base for the American troops. Nevertheless, Sheikh Ali Salman, general secretary of the Wifaq party, who studied in the Iranian city of Qom, has made a point of repeating during the protests that the party is not aiming to create a religious republic, either along Iranian or any other lines. In protest at the brutal clearing of Pearl Square, the party has chosen to boycott the parliament and has officially suspended its participation in it.

The mood of the demonstrators turned ugly following the shooting dead of a third person by security forces during the funeral procession for two earlier victims, and things were to deteriorate even further after events at Pearl Square, with some even calling for the overthrow of the monarchy. Photos on Facebook of bloody corpses with their heads blown off have further inflamed the situation.

Many are now saying that they want to continue the protest so that those who were killed, and who are being hailed as martyrs by the Shiites, will not have died in vain. For the moment, however, protestors are being called upon to remain peaceful and not to turn to violence.

Dr Sabine Damir-Geilsdorf is a lecturer in Islamic Studies at the University of Bonn and is currently working on a research project funded by the Gerda Henkel Stiftung on the Sharia concepts and reform agenda of Islamist parties in Bahrain, Egypt, Lebanon and Palestine.

How is one to convey the history of Islamic images of Muhammad freed from today’s polarised politics? What are the challenges and pinch points of this particular academic ... END_OF_DOCUMENT_TOKEN_TO_BE_REPLACED

The devaluation of the Egyptian pound combined with rising food prices is taking its toll on Egypt. More and more people are slipping into poverty. Karim El-Gawhary reports from ... END_OF_DOCUMENT_TOKEN_TO_BE_REPLACED

Chinese President Xi Jinping's visit to Saudi Arabia in December 2022 may have rattled Washington, but it simply highlighted the Arabs’ desire to diversify their foreign relations ... END_OF_DOCUMENT_TOKEN_TO_BE_REPLACED

Lebanon was long viewed as the Switzerland of the Middle East. Until relatively recently, billions were deposited in its banks. Gulf states were among the foremost investors in ... END_OF_DOCUMENT_TOKEN_TO_BE_REPLACED

Protests by Western activists at the FIFA World Cup may have backfired and sparked a backlash against gay, lesbian and queer communities in Qatar, critics say. By Cathrin Schaer END_OF_DOCUMENT_TOKEN_TO_BE_REPLACED

According to a recent survey, half of all Iranians say that they have left Islam as a religion, while two-thirds believe Islamic law should be excluded from their legal system. In ... END_OF_DOCUMENT_TOKEN_TO_BE_REPLACED
Date:
Mail:
Send via mail

END_OF_DOCUMENT_TOKEN_TO_BE_REPLACED
Social media
and networks
Subscribe to our
newsletter