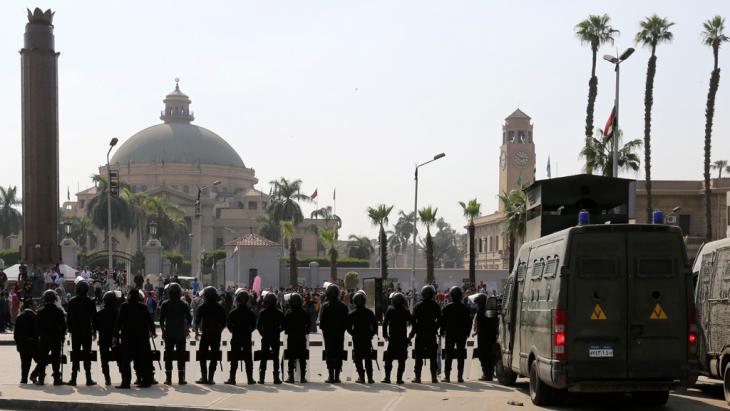 Students in the firing line

The revolution lives on at Egypt's universities – still. But the government is moving ever more quickly to break the students' resistance. Details from Markus Symank in Cairo

Marwa speaks quickly and at length. As if she wants to get everything out before the government puts a muzzle on her. "They try to intimidate us in every way you can imagine. But we won't be quiet!" says the medical student from Cairo.

"They" are the Egyptian government, who, with the help of their omnipresent security apparatus and ever-harsher laws, are trying to gain control of the country's universities. "We" are politically active students like Marwa, who are not willing to give up their hard-won freedoms. Just a few days ago, the 23-year-old was suspended from Ain Shams University for a period of two weeks. As a leading member of the student union there, she organised a memorial ceremony for a fellow student who was killed three years ago. This was construed as an attempt to storm the university. "They forbid us from doing anything that has the slightest whiff of politics about it," says Marwa.

Universities as strongholds of resistance

The country's universities are proving to be a headache for President Abdel Fattah al-Sisi's regime. While elsewhere the mass protests against military rule have largely subsided, the universities will not be quiet. Since the start of the winter semester, hardly a day has passed without protests, frequently accompanied by bloody skirmishes and random arrests.

According to information from the Association for Freedom of Thought and Expression (AFTE) in Cairo, in the past month alone more than 160 students have been arrested across the country, and another 300 expelled from university. In total there are thought to be around 2,000 students currently in custody. The number is particularly high at the religious Al-Azhar University, where a higher than average number of members of the now banned Muslim Brotherhood are enrolled. 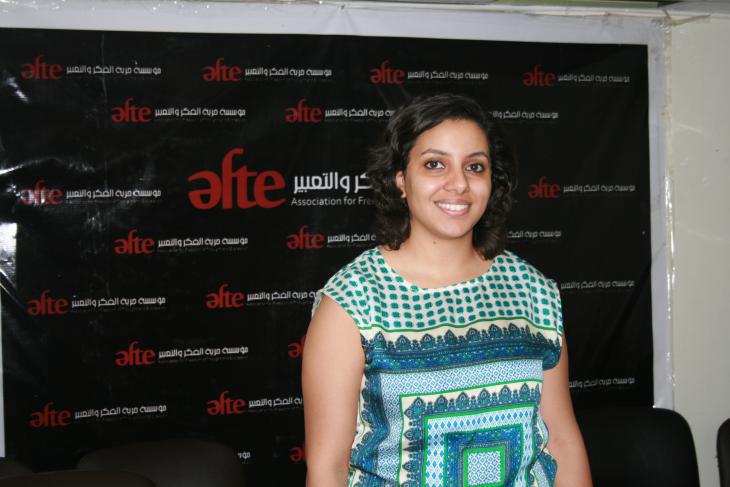 "The government reacts to the students' resistance with even more violence," she says. "It would be better if they responded to their legitimate demands," says lawyer Fatma Serag from the organisation "AFTE".

The increasing violence has now claimed numerous lives. Most recently, two weeks ago a student in Alexandria succumbed to serious head injuries. Eye witnesses said he was shot at by the police. In total, at least 19 students have died in clashes with the security services since the Islamist President Mohammed Morsi was deposed on 3 July 2013. "That's the highest number of victims at Egyptian universities since the British occupation," says the lawyer Fatma Serag from AFTE.

Even before the start of the semester, the government in Cairo claimed to be confident that it was getting the protests under control, after the violence and chaos of the previous year. It authorised the universities to summon the police to their campuses at any time. The private security firm "Falcon" was hired to search students for weapons and explosives at the entrances. And the ministry of the interior equipped the universities with metal detectors and surveillance cameras.

But the strategy backfired. On the first day of the new semester, the students' rage led to mass protests. And two weeks ago, when a homemade bomb exploded outside the entrance to Cairo University, injuring 11 people including a senior police officer, things spiralled further out of control. The "Falcon" officers were unable to cope with the situation, and hundreds of police officers had to be called in.

Last Tuesday, for the first time armed soldiers even stormed the university grounds in the city of Mansoura, to the north of Cairo. "Fears are circulating. Anyone who the security services don't like can be arrested," says the student leader Hosam Fahmi, who is enrolled at the University of Tanta in the Nile Delta. The lawyer Fatma Serag thinks this course of action is highly dangerous. "The government reacts to the students' resistance with even more violence," she says. "It would be better if they responded to their legitimate demands."

All forced into the same corner

As a consequence of the state suppression, the dividing lines between Islamist demonstrators and other regime opponents are becoming blurred. A year ago, the protestors were almost all members of the Muslim Brotherhood. Now secular student groups are increasingly showing solidarity with them. "I don't share the Muslim Brothers' ideology. But when it comes to human rights we have to stick together," says the activist Marwa. 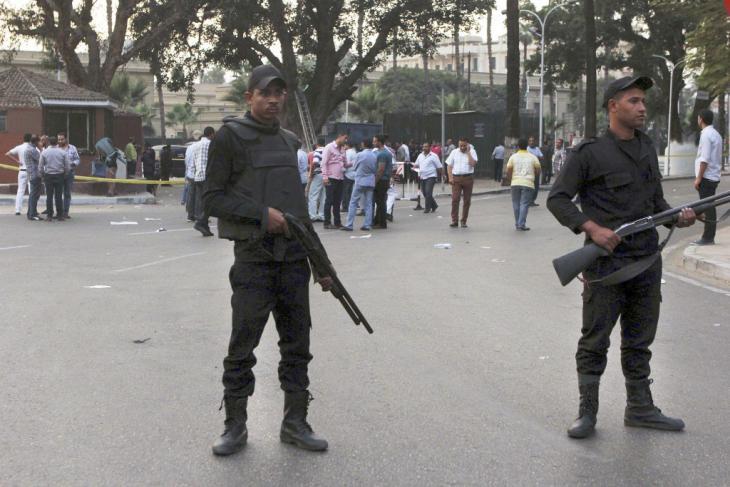 Using violence against rebelling students: Even before the start of the semester, the government in Cairo claimed to be confident that it was getting the protests under control, after the violence and chaos of the previous year. It authorised the universities to summon the police to their campuses at any time. But the strategy backfired. On the first day of the new semester, the students' rage led to mass protests.

Hosam Fahmi, the leader of the Egyptian student union in Tanta, also believes people cannot remain silent in the face of the brutal actions of security forces. His union, which includes students from the "April 6 protest movement", the "revolutionary socialists" and other political groups, does however criticise the Islamists. "It is a fact that the Muslim Brothers have some hooligans in their ranks," says Fahmi. And they are only fighting for their own concerns, not for all students. The student union therefore tries to remain at a distance from the Islamists. But this is increasingly difficult, since the government is forcing all politically active students into the same corner.

The Islamist students, on the other hand, point the finger of blame for the escalation elsewhere. "The government alone is responsible for the violence," says Mahmud al-Azhari, spokesman for the "students against the army putsch" group, which is close to the Muslim Brotherhood. Al-Azhari, who only gives interviews via Skype as a safety precaution, points to the latest wave of arrests of non-participating students as an example. Last January at the University of Cairo, the police detained 34 students who had just taken their exams. They had to endure eight months in prison without charge, and were only released in September.

At the same time, the police are conducting a targeted hunt for student leaders. According to the student unions, the security forces can also rely on informers among the tutors and professors.

"The government is abusing the fight against a few students who are prepared to use violence, using it to reverse the progress achieved since the revolution in terms of free speech and freedom of assembly," Fatma Serag says critically. So far, a large section of the population seems to have supported the regime's ruthless actions, a fact which is probably also due to the propaganda in the state media. But some observers believe that the mood could turn if the security forces should stick to their ruthless course.

Warnings of a new explosion

In the past week, the government has turned the screw of escalation once again: President Sisi has passed a decree according to which students and pupils who "sabotage" educational establishments can in future be brought before military courts. Human rights campaigners believe the ambiguous clauses run counter to the constitution. Hosam Fahmi thinks that in the short term, the draconian legislation could bring peace to the universities. But he fears that dissatisfaction will continue to build in the underground, and at some point it will explode.

The activist Marwa has a similar take on the situation. She warns: "If you treat people like terrorists for long enough, at some point they will become terrorists."

The past enthusiasm of the Egyptians lives on in the Iraqis of today. But just as they were nine years ago in Cairo, current prospects in Baghdad are dim. A comparison by Birgit ... END_OF_DOCUMENT_TOKEN_TO_BE_REPLACED

Insults directed against Egyptian President Abdul Fattah al-Sisi have been particularly prominent among the hundreds of chants by Arab protestors in Algeria, Sudan, Iraq and ... END_OF_DOCUMENT_TOKEN_TO_BE_REPLACED

Political analyst Taqadum al-Khatib argues that Egypt can, in co-ordination with its European partners, develop a common vision to solve the complex conflict in Libya. For this to ... END_OF_DOCUMENT_TOKEN_TO_BE_REPLACED

The upheavals of the past year in the MENA region are arguably as momentous as those of the Arab Spring in 2011. Yet perhaps the biggest difference is that our interest seems to ... END_OF_DOCUMENT_TOKEN_TO_BE_REPLACED