Renewed protests and violent clashes with Israeli security forces at the weekend have prompted the court hearing scheduled for 10 May to be postponed. Yet it remains unclear what the final outcome for four Palestinian families facing eviction by Jewish settler organisations in the east Jerusalem neighbourhood of Sheikh Jarrah will be. By Tania Kraemer

The usually quiet residential neighbourhood of Sheikh Jarrah in east Jerusalem is in turmoil. For the past two weeks, young Palestinians have been holding nightly protests against the imminent eviction of several Palestinian families from their homes in the neighbourhood, to make way for Jewish settlers.

Tensions have been building in the city. On 7 May, 205 Palestinians and 18 police officers were wounded as clashes erupted after prayer at Jerusalem's holy Al-Aqsa mosque compound and elsewhere in east Jerusalem.

"Sheikh Jarrah has seen a systematic push by the Israeli government to take over our homes, and there is clear collusion between the settler organisations and the Israeli judicial system to throw us out of our homes," said Mohammed el Kurd, a young writer whose family is one of the four that has been threatened with eviction.

El Kurd gathered with his family and other protesters on Friday at sunset at a long table in front of the family home to break their Ramadan fast. Across the street from their vigil, Jewish settlers stood in defiance in front of a house they had already taken over in this Palestinian neighbourhood a decade ago. 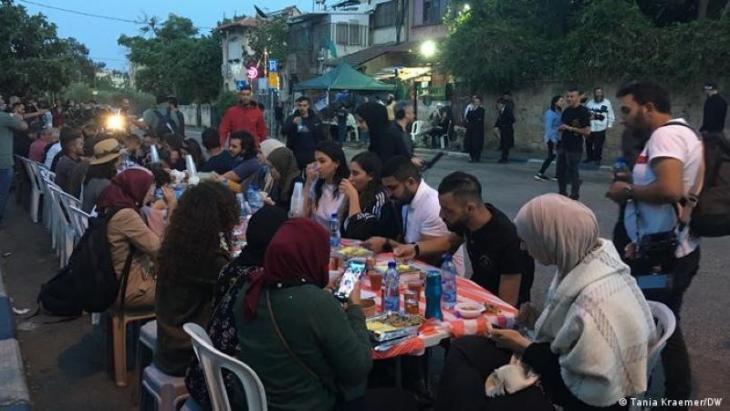 A tense iftar: El Kurd gathered with his family and other protesters on Friday at sunset at a long table in front of the family home to break their Ramadan fast. Across the street from their vigil, Jewish settlers stood in defiance in front of a house they had already taken over in this Palestinian neighbourhood a decade ago. Over the course of the evening, demonstrators and settlers threw plastic chairs, cans and stones at each other, as the stench of skunk water sprayed by the police in previous days lingered in the air

Over the course of the evening, demonstrators and settlers threw plastic chairs, cans and stones at each other, as the stench of skunk water sprayed by the police in previous days lingered in the air. As with other evenings, armed Israeli special police later moved in to harshly disperse the crowds and to arrest some of the Palestinian protesters.

Friday evening's visit by Itamar Ben-Gvir, the leader of a far-right party in the Knesset, didn't help. He came along with other right-wing nationalists to show support to the settlers and to call for protection from their Arab neighbours and protesters.

"I am not afraid," said Murad Atia, a 25-year-old Arabic teacher who lives next door. "This is our house. If we are afraid, they will just take our houses, so we can just go and leave."

The violent skirmishes in recent weeks have added to long-standing legal battles between the residents of Sheikh Jarrah and Israeli settler organisations since evictions started in 2008. Over the last decade, both Palestinian and Jewish activists have demonstrated against expanding takeovers by settlers in the neighbourhood. But this time, many more people have joined the protests.

According to human rights organisations, the four families are among eight in the area who are currently under a threat of immediate eviction claims filed by settler organisations. The other four families could be evicted by August, with more households in various stages of the legal process. In addition, several families in the neighbourhood of Silwan, to the south of the Old City, are also facing expulsion.

A narrow pathway leading to the house of Abdelfattah Iskafi passes along a small settlement enclave secured by armed guards. Iskafi's family is among the households facing eviction in the coming days. Sitting in the shade in the paved courtyard of his one-story house, the family father is wary of what is to come after having exhausted almost all of his legal options.

"The kids are in constant worry," he explained. "Where will I go, me and the other three families? The houses here in the area are around 3,000 or 5,000 U.S. dollars [to rent in Sheikh Jarrah – Editor's note], only international people can do that. We are modest people, we are not rich, we are refugees; we only own our houses."

The Sheikh Jarrah neighbourhood stretches over a small hill in the north of east Jerusalem, a 10-minute walk from the Old City. Several diplomatic missions and offices of international organisations are located in the upper quarters of the residential area. The neighbourhood also hosts the site of the tomb of Simeon the Just, a Jewish high priest revered by ultra-Orthodox Jews who typically come to the area to pray. According to the Israeli anti-occupation group Ir Amim, Sheikh Jarrah and Silwan are now under "[the] greatest pressure from ideological settler groups."

The eviction battle lies at the heart of the Palestinian-Israeli conflict. Like many other Palestinian residents of Jerusalem, Skafi said his family had to abandon their home in mostly Jewish, west Jerusalem and flee to the eastern part of the city during the 1948 Arab-Israeli war. In the aftermath of the foundation of the state of Israel in 1948, the wider family was scattered between Gaza and neighbouring Jordan.

East Jerusalem and the West Bank were then administered by Jordan, which gradually resettled Palestinian refugees in new housing projects in Sheikh Jarrah under the auspices of the United Nations Relief and Works Agency for Palestine Refugees (UNRWA). In exchange, resettled families renounced their status as refugees. During the Six-Day War in 1967, Israel occupied and later annexed east Jerusalem.

The most recent eviction demands were filed by Nahalat Shimon, a right-wing nationalist settler organisation registered in the United States. The group allegedly bought the land from two Jewish associations which assert having purchased the land at the end of the 19th century. For Jerusalem's deputy mayor and settler activist Aryeh King, the Palestinian families are simply "squatters".

"The land belongs to Jews for almost a hundred years. Jews lived there, and Jews own the land since then," said King. Dismissing the simmering tensions, he hopes that the court will soon decide to evict the families. "It's a local conflict, it's not affecting all of Israel or Jerusalem, it's a few Arab families that decided to break the law," he added.

With reported hostilities against Israeli journalists and the flag of the Palestinian territories flying on the streets and in the stadiums, it is clear the World Cup in Qatar is ... END_OF_DOCUMENT_TOKEN_TO_BE_REPLACED

When is it and when is it not acceptable to display a political banner at the World Cup in Qatar? The answer seems to depend largely on the political message, with fans ... END_OF_DOCUMENT_TOKEN_TO_BE_REPLACED

A leading light of Israeli theatre, Ofir Henig has directed the Israel Festival and is the only female director to have been awarded the Israel Theatre Prize. These days, however ... END_OF_DOCUMENT_TOKEN_TO_BE_REPLACED

With the current leadership of Iran quick to lay the blame for the Iran protests on Israel, the chances of harmonious relations between the two countries still seems remote. Yet, ... END_OF_DOCUMENT_TOKEN_TO_BE_REPLACED

Daniel Barenboim is not only a world-famous pianist and conductor. He has also worked tirelessly to foster understanding and reconciliation between Palestinians and Israelis. By ... END_OF_DOCUMENT_TOKEN_TO_BE_REPLACED

After a two-year hiatus, the Arab League re-convened at the beginning of November in Algiers against a backdrop of uncertainty and discord. By Pierre Boussel END_OF_DOCUMENT_TOKEN_TO_BE_REPLACED
Author:
Tania Kraemer
Date:
Mail:
Send via mail

END_OF_DOCUMENT_TOKEN_TO_BE_REPLACED
Social media
and networks
Subscribe to our
newsletter