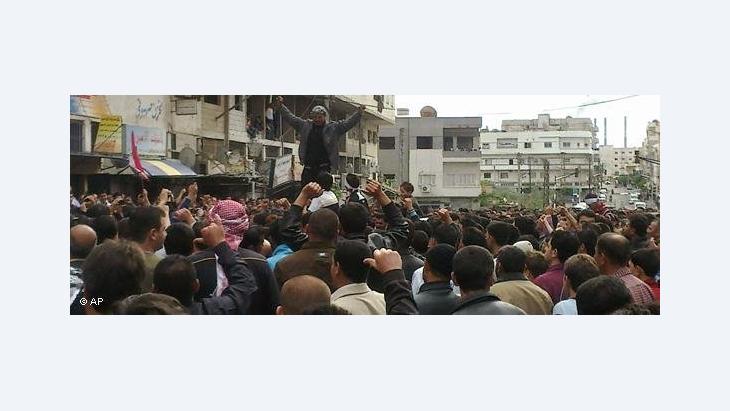 ''The People Want to Topple the Regime''

﻿The protests in Syria are spreading like wildfire. The state is monitoring all journalists and suspects every foreigner of being a potential conspirator. And the secret police are hunting down demonstrators. Svenja Andersson reports from Damascus

The atmosphere in Damascus is so tense it is hardly bearable. Just one hour after the guest has checked into the colonial-style hotel on Marja Square in the city centre, a window opens in the building opposite. From that moment, a man with a dark leather jacket and equally dark sunglasses maintains a close eye on what's happening.

In the lobby sit men in grey suits with apparently nothing better to do than read newspapers for hours.

Outside, people you've just seen on Marja Square appear in the old city two kilometres away. The clicking noise in your mobile phone sounds like more than just signal interference. And when your computer flashes up a virus alert, it's absolutely clear: the Syrian state security service is running a blanket surveillance operation.

Since the Syrian government began blaming a foreign conspiracy for the unrest, every foreigner is viewed as a potential conspirator. Journalists appear to be the prime targets for suspicion. Media representatives have been unable to obtain visas for weeks. And those still inside the country are mercilessly hounded.

The Arabic news broadcaster Al Jazeera, based in the Gulf state of Qatar, was the only foreign media outlet with its own correspondent in Syria that was able, until recently, to report on the uprising. After 19 days in jail, the female journalist has now been sent back to Doha via Iran. 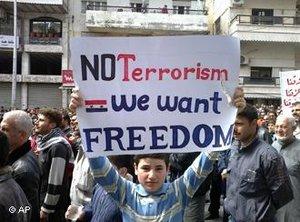 Demanding change: Beginning in Deraa in the south, on the border with Jordan, the Syrian revolt has spread like wildfire to the north, west and latterly to the east of the country

At the same time, the Iranian newspaper "Hamshahri" writes that Syria is indeed being destabilised by western powers because it supports resistance organisations, most likely a reference to Hamas in the Gaza Strip, Hezbollah in Lebanon or rebels in Iraq. Libya also stands by the Syrian regime and blames the unrest on foreigners. In a declaration, the Libyan People's Committee for International Cooperation calls for an end to foreign meddling in Syrian affairs and speaks of an "imperialist propaganda fire".

This "propaganda fire" is however currently being provided almost exclusively by the government in Damascus itself. Hardly a day goes by when people are not paraded on state television confessing membership of a group that's trying to topple the government. A total of 8,881 people have allegedly given themselves up so far. But the people of Syria, who number in excess of 22 million, are undeterred. The protests are increasing in size and scope by the day, as the ranks of protesters swell.

The bloody power struggles of the Ba'ath Party

Abdallah is sitting in a stationery shop in a street off Marja Square, and is despondent. After long years of isolation, his country had just begun to cautiously open itself up to the world again. Tourism had begun to flourish. "The French were the first to come back to us," he says. Abdallah had been pleased, as a French speaker he was able to supplement his pension with guided tours. But now the borders have been resealed. France, which received the mandate for Syria and Lebanon after the First World War, was able to uphold its authority until 17 April 1946 and the declaration of the Arabic Republic of Syria. Abdallah was 10 years old at the time. 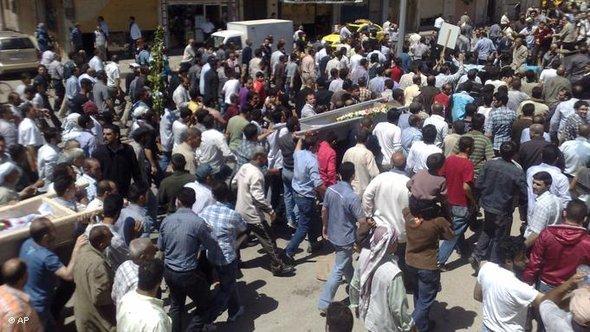 Syrian anti-government supporters carry the coffins of people whom they say were killed in the government crackdown, in the central city of Homs, Syria, Saturday, May 21, 2011. Syrian security forces killed at least three people after opening fire on a massive funeral procession for eight anti-government protesters slain the day before, a human rights activist said

Much has happened since then: three wars against Israel; the merging of Egypt and Syria into the United Arab Republic, a union that survived just under three years; bloody power battles engineered by the Ba'ath Party from which Hafiz al-Assad emerged victorious; rebellions and unrest. Assad's response was always harsh, and he became continually more ruthless and more brutal. When he died 11 years ago, he left his son Bashar a power structure with 17 different security services and special units.

"The people want to topple the government," chanted demonstrators on 14 April, the day that the protests reached the capital Damascus for the first time. For weeks now, people have been taking to the streets pretty much everywhere. Beginning in Deraa in the south, on the border with Jordan, the revolt has spread like wildfire to the north, west and latterly to the east of the country. People everywhere are demanding change. While initial demands centred on reforms, an improved infrastructure, more jobs, less corruption and above all the lifting of the 50-year state of emergency, demonstrators are increasingly calling for the President to go.

Every shot fired on demonstrators stokes the anger against the ruler and his entourage. Human rights activists say at least 1,000 people have already been killed. Hospitals are full of innumerable wounded, and prisons with countless detainees. "Stop shooting" a group of 250 young men and women call out on Arnous Square in the centre of Damascus. "We want a free civil society!" Secret police agents hound the demonstrators with buses: "You pimps, you spies! You want freedom? We'll give you freedom!" they yell from the vehicles. The ensuing gunshots ring out through the city centre.

Hervine has no sympathy for the President. He's had 11 years to change things and assert his new ideas against the old guard, she says. His charismatic speech after taking over the presidency following the death of his father, in which he promised reforms and a liberalisation of society and the economy, were not followed up with actions. Like all the others, all he can do is reach for the baton, she adds. 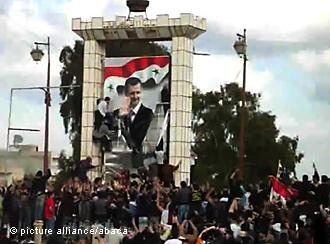 Reaching for the baton: Human rights activists say at least 1,000 people have already been killed since the protests began on 26 January. Pictured: protestors demolish a poster of President Asad in Daraa

But the diminutive woman stops talking when a man in a grey suit enters the stationer shop. She pays for her pen and notebook before leaving the shop in a calm and collected manner. She stops on a busy street corner, and carries on talking there. The people of Syria already felt the iron fist of Bashar al-Assad back in early 2004, she says, during clashes between demonstrators and security forces when hundreds of Syrian Kurds, including children, were arrested and killed. Those protests occurred in Qamishli, Amuda and Afrin, in northeastern Syria where most of the Kurds live. Demonstrators had been calling on the regime to release all political prisoners.

Kurdish ambitions for greater freedom, autonomy and self-determination have not only led to bloody conflict in Syria in the past. Neighbouring countries Iraq and Turkey have also taken steps to crush their Kurdish populations. In June 1963, Hafiz al-Assad and Saddam Hussein even joined forces against the minority.

But whereas in all these years, conflicts and rebellions were usually locally-based and limited to a region or a city, today's protest movement is spread across the nation. The army, the police and state security forces are rushing from one place to the next. As the tanks pull out of Deraa in the south, they roll into Banja in the north. Although the northern city of Aleppo may be deemed "placated", unrest then erupts in the Mediterranean port of Latakia.

"Our drive for freedom has captured everyone's imagination," says Hervine, visibly proud. People are no longer willing to be pigeon-holed along ethnic or religious lines. The people against the rulers is now the order of the day, she says. "It depends who can hold out the longest – us or them?" She points to an outsized poster of Bashar al-Assad and his father Hafiz, an omnipresent image in Damascus. Some of the posters have been torn, others splashed with paint.

(all names have been changed for security reasons)

The photos of the first Friday prayers in Hagia Sofia in 86 years triggered passionate and diverse responses around the world. Surrounded by a coterie of ministers, Turkey's ... END_OF_DOCUMENT_TOKEN_TO_BE_REPLACED

Morocco officially declared itself a country of immigration in 2013, responding to the growing number of immigrants arriving from sub-Saharan Africa. Since then, tens of thousands ... END_OF_DOCUMENT_TOKEN_TO_BE_REPLACED

As a consequence of the coronavirus pandemic, the Osnabruck Morgenland Festival took place via YouTube for the first time – transporting us to new cultural regions through music. ... END_OF_DOCUMENT_TOKEN_TO_BE_REPLACED

Twelve million Syrians are dependent on humanitarian aid, a sombre figure that conceals much suffering and high costs, of which Europe bears 80%. With an aid shortfall looming, ... END_OF_DOCUMENT_TOKEN_TO_BE_REPLACED

In the age of corona, Ankara's regional power strategy is twofold: on the one hand, Turkey is engaged in a charm offensive to revamp its political image, which has suffered lately ... END_OF_DOCUMENT_TOKEN_TO_BE_REPLACED

END_OF_DOCUMENT_TOKEN_TO_BE_REPLACED
Social media
and networks
Subscribe to our
newsletter