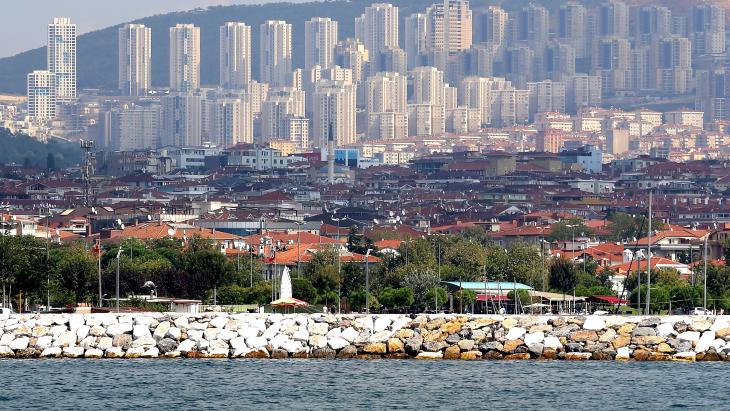 Amid recent fears of earthquakes, Turkey has rolled out a new urban renewal plan. But past plans have failed to helped quake-prone neighbourhoods, due to a market dominated by construction firm interests. Ayse Karabat reports from Istanbul

After every powerful earthquake, Turkish citizens ask themselves one question: “Will my family and I also be trapped under rubble in the event of another earthquake?”

These worries and fears are not groundless. Many residents live with the fear over whether the buildings they live in will collapse should a major earthquake strike. The most recent powerful earthquake to hit Turkey occurred in the east of the country on 24 January 2020, killing 41 people and injuring more than 1,600.

Turkey lies on several fault lines and is currently on tenterhooks: two decades ago an earthquake struck the Marmara region that killed tens of thousands, mostly due to the low quality of materials used in buildings. And experts say another one is due in the near future.

There are almost 18 million buildings in Turkey, and at least 6.5 million of them are either not sturdy enough to withstand earthquakes, were built illegally or lack the proper foundations. These put them under the spotlight for urban renewal – or gentrification – and the Urban Planning and Environment Ministry has recently declared a new action plan aiming to transform 300,000 buildings annually.

While talking about this action plan, Urban Planning and Environment Minister Murat Kurum said urban renewal is "as important as the fight against terrorism." 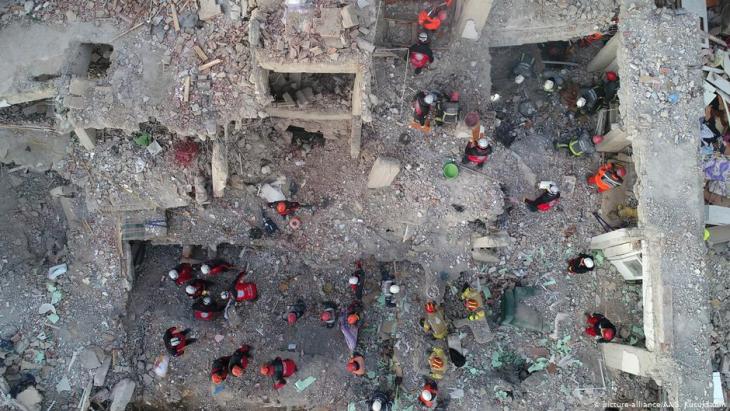 Devastating destruction: 41 people died in the earthquake in Elazig at the end of January 2020. Severe earthquakes are common in Turkey, as the country lies on several seismic plates. On 17 August 1999, an earthquake measuring 7.4 on the Richter scale killed more than 17,000 people in Izmit, Istanbul and other places. The last major earthquake occurred in 2011 in Van province. It reached a magnitude of 7.1, killing more than 600 people.

But this urban renewal is based on an approach that foresees demolishing and re-constructing, rather than improving current buildings and carefully planning city development, as the Chamber of Civil Engineers and the Chamber of City Planning Engineers have underlined in separate reports. They claim that this transformation is not one that will create safer or healthier cities to the benefit of residents. In fact, it has all the appearances of "urban rentierism".

"Urban renewal must be implemented based on a comprehensive planning strategy. The state should play the role of regulatory body acting in the general public’s interest. Empowerment, rehabilitation and restoration should be the top priority," Ayhan Erdogan, secretary-general of the City Planners Chamber, told Qantara. "But because it is more profitable for construction companies, destruction and redevelopment is taking the upper hand," he said.

Urban renewal is controversial in Turkey. Independent experts have consistently criticised the authorities for putting the interests of the private sector before those of citizens. "The understanding of urban renewal in Turkey is of one driven by the private sector. In the process citizens are forced to reach deals with contractors directly, deals that are frequently to their detriment," Ayhan Erdogan continues.

Urban rentierism is particularly centred on Turkey's major cities, where populations are rapidly increasing. According to the Turkish Statistics Institute (TUIK), 88 percent of the entire population now lives in urban areas.

Down the years, illegal and weak buildings were constructed on the city outskirts to form shanty towns, a direct result of uncontrolled and unplanned urbanisation. As the cities grew, they eventually became part of the urban landscape, trapped in the midst as the city sprawled outwards. One such neighbourhood is Istanbul’s Fikirtepe, a district just off the city’s main E-5 highway on the Asian side.

In recent years Fikirtepe, which extends over 1.34 million square metres, has become the focus of urban renewal. Estate agent websites claim that the number of dwellings being constructed will be double the number of those bulldozed, with a value increase of around 188 percent. 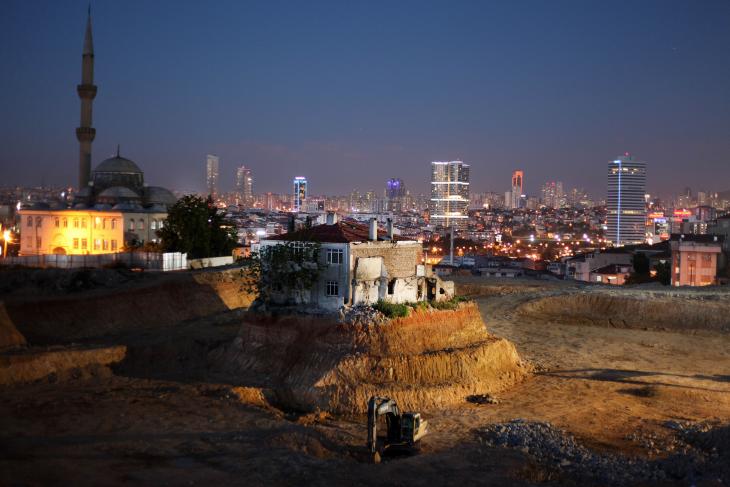 On the way to becoming Istanbul's Manhattan? Many residents were pushed out of Fikirtepe, as they got outpriced out of their homes and were replaced by wealthier people. Ayhan Erdogan is of the opinion that the state should step in to help struggling residents pay their rent

As with several other major construction projects, gentrification in Fikirtepe accelerated in 2010, following the introduction of a specific law aimed at ensuring and easing the renewal process. The law was prepared in the wake of an earthquake in the eastern Van province in 2011, which killed more than 600 people. Ayhan Erdogan claims that this law and related regulations have placed the residents of these urban renewal areas and contractors at loggerheads.

Residents of a neighbourhood usually agree with constructors to demolish their low-rise houses. The constructors then either buy them out, or offer them smaller accommodation in the high-rise buildings they want to build in return. But in many cases, the constructors can’t be bothered with dealing with each individual owner, so they outsource this work to "mediators", who frequently offer less than the value of the property, to then sell them on to constructors for profit.

Sabir Karakocoglu, from Fikirtepem Dernegi, said the government never got involved in the urban renewal process of the run-down neighbourhood, despite its huge area. "Dreaming of becoming rich, many inhabitants accepted the terms. They never asserted their rights and even got angry with neighbours refused to fall prey to these mediators. Now, however, these people cannot afford to live in the high-rise buildings, because the building maintenance fees are 1,000 Turkish lira a month. And those who want to sell up are unable to find buyers," she explains.

Once a working-class district, Fikirtepe grappled with its reputation of being a rough area, while real estate adverts promised to transform the neighbourhood into "Istanbul’s Manhattan", in complete disregard of its original character and the collective memory of the local population. 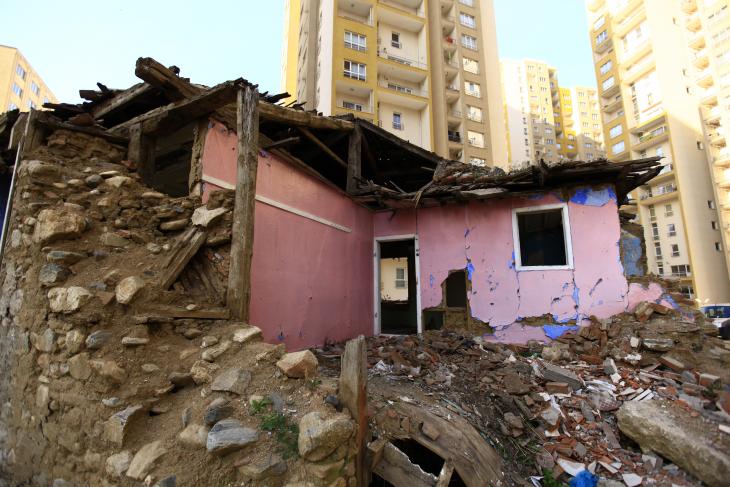 Gentrification mania and greed for profit trumps the right to housing: reports published by the Civil Engineers' Chamber confirm that current urban renewal plans are rarely in response to earthquake threats or deficiencies in housing stock, but are instead designed to feed demand on the highly speculative property market, writes Karabat.

Many residents were pushed out of Fikirtepe, as they got outpriced out of their homes and were replaced by wealthier people. Ayhan Erdogan is of the opinion that the state should step in to help struggling residents pay their rent.

Against this backdrop, it should be noted that in 2019, some 10 percent of all houses sold in Istanbul were to foreigners, as Iraqis topped the list and Saudis and Kuwaitis followed suit, according to TUIK.

Elsewhere in Istanbul, others are experiencing a similar fate. Sibel Mursel, a single mother of three, lived in Ferikoy, within walking distance of the central commercial Sisli district and a neighbourhood home to Turkey’s Armenian, Syriac and Roma minorities.

"My sister and I gave a house we inherited from our father to a construction company in exchange for an apartment each, like almost everyone on our street. But our neighbourhood changed completely. The newcomers were upper-middle class people and everything became more expensive. The strong sense of community we had grown up with just disappeared. Our street wasn’t ours anymore. So we moved," said Mursel, who now lives in Atasehir on the Asian side.

According to the Civil Engineers Chamber, this gentrification frenzy is down to the inflated position the construction sector holds in the Turkish economy. Reports published by the chamber confirm that current urban renewal plans are rarely in response to earthquake threats or deficiencies in housing stock, but are instead designed to feed demand on the highly speculative property market.

Relations between Turkey and Russia are ambivalent. Moscow is nonetheless trying to prop up the leadership in Ankara. Elections are to be held in Turkey in June – and the last ... END_OF_DOCUMENT_TOKEN_TO_BE_REPLACED

All eyes in Turkey are on a court hearing scheduled for January 30 into a child abuse case that allegedly occurred with the knowledge of one of Istanbul's most powerful Islamic ... END_OF_DOCUMENT_TOKEN_TO_BE_REPLACED

Any reconciliation between Turkey and Syria’s Assad regime would have disastrous consequences for many Syrians, explains Syria expert Kristin Helberg END_OF_DOCUMENT_TOKEN_TO_BE_REPLACED

The poetry of Pir Sultan once prompted uprisings in the Ottoman Empire. To this day, Alevis identify with him. Rainer Hermann visited Mehmet Celebi, a direct descendant of the ... END_OF_DOCUMENT_TOKEN_TO_BE_REPLACED

There are signs of an imminent normalisation of relations between Turkey and Syria. This would allow Erdogan to score political points domestically before the upcoming elections ... END_OF_DOCUMENT_TOKEN_TO_BE_REPLACED

Turkey will mark the centenary of the proclamation of the Turkish republic in October. But 2023 will be an important year in another respect too: Turks will go to the polls in ... END_OF_DOCUMENT_TOKEN_TO_BE_REPLACED
Author:
Ayşe Karabat
Date:
Mail:
Send via mail

END_OF_DOCUMENT_TOKEN_TO_BE_REPLACED
Social media
and networks
Subscribe to our
newsletter