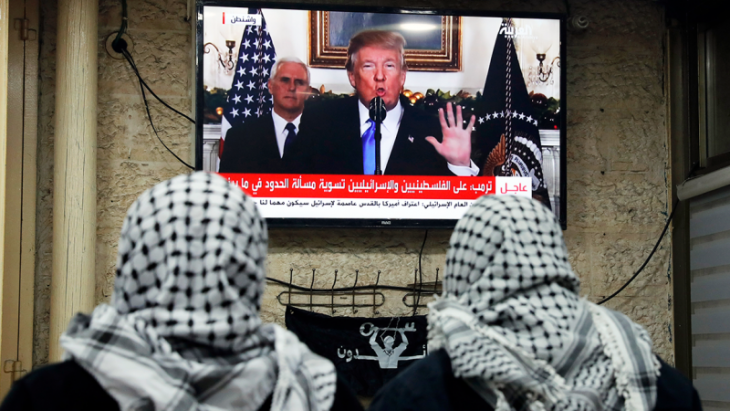 The US decision to recognise Jerusalem as the capital of Israel comes in defiance of overwhelming global opposition. The message is clear: the Trump administration is determined to dictate the Israeli version of peace with the Palestinians, rather than to mediate an equitable agreement between the two sides. By Daoud Kuttab

In a matter of three weeks, the United States government has attacked the Palestinian people on three fronts. First, on 17 November, President Donald Trump's administration announced its decision (subsequently reversed) to close the Palestine Liberation Organization's diplomatic office in Washington, DC. Then, on 5 December, the US Congress voted unanimously to adopt the Taylor Force Act, which blocks aid to the Palestinian Authority from 2018 to 2024, unless the PA stops paying monthly salaries and other benefits to the families of killed or convicted Palestinian militants. But it was the third attack, which came the following day, that will prove most devastating to efforts to achieve peace.

In defiance of overwhelming global opposition, not to mention past United Nations General Assembly and Security Council resolutions, Trump announced that the US will officially recognise Jerusalem as the capital of Israel. The message is clear: the Trump administration is determined to dictate the Israeli version of peace with the Palestinians, rather than to mediate an equitable agreement between the two sides.

Of course, that is not how Trump's administration presents it. As the New York Times reported just before the announcement, Trump administration officials believe the decision, which entails moving the US embassy in Israel to Jerusalem, could actually hasten the peace process, "by removing a source of ambiguity from the American position". After all, they point out, the embassy question comes up every six months, when the president has to sign a new waiver to keep the embassy in Tel Aviv – a process that, from their perspective, repeatedly stokes political tension.

In his address on the topic, Trump reiterated this argument. Officially recognising Jerusalem as the capital of Israel, he asserted, "is a long-overdue step to advance the peace process and to work towards a lasting agreement." He also claimed that the decision "is not intended, in any way, to reflect a departure from our strong commitment to facilitate a lasting peace agreement," one "that is a great deal for the Israelis and a great deal for the Palestinians." 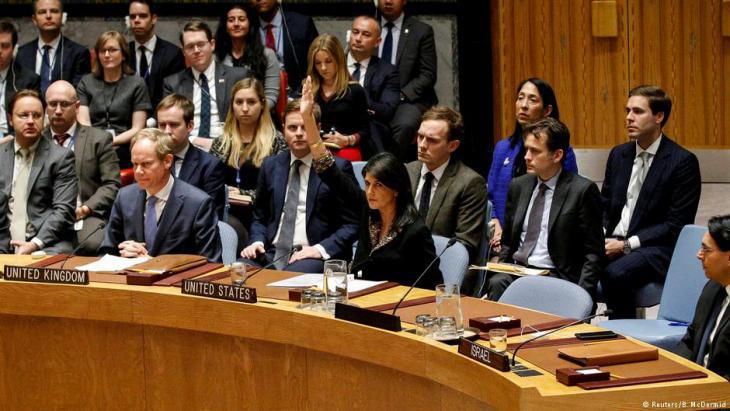 Addressing the UN General Assembly, US Ambassador to the UN, Nikki Haley (pictured here), said "The United States will remember this day in which it was singled out for attack in this assembly. We will remember it when we are called upon to once again make the world's largest contribution" to the UN and when other member nations ask Washington "to pay even more and to use our influence for their benefit"

But, in that same speech, Trump betrayed the superiority he ascribes to Israel: "Israel is a sovereign nation with the right like every other sovereign nation to determine its own capital." Despite its best efforts, Palestine, of course, is not recognised as a sovereign state by the US. So, far from seeking a fair peace deal between the two parties, Trump has effectively declared victory for Israel – and instructed the Palestinians to accept defeat quietly.

Yet the Palestinians have displayed a profound capacity for resistance. Just last summer, when the Israeli government decided unilaterally to install metal detectors at the entrances of Al Haram Al Sharif/Al Aqsa Mosque, Palestinians demonstrated outside the mosque for two weeks, forcing the Israelis to reverse the decision.

Moving the US embassy to Jerusalem is a far more powerful symbolic move, suggesting that it could spur even more formidable resistance – and not just from the 300,000 Palestinians who live in East Jerusalem, or even from the more than 12 million Palestinians around the world. What Trump's administration fails to recognise is that Jerusalem – the third-holiest site in Islam, after Mecca and Medina – isn't just an Israeli-Palestinian issue; all of the world's 350 million Arabs and 1.5 billion Muslims have a direct and vital stake in it.

Trump may think that his current honeymoon with Saudi Arabia will allow him to escape pushback from Arab leaders. But Crown Prince Mohammed bin Salman is facing too much opposition to his own reforms to side openly with Israel on so emotive an issue as Jerusalem.

The fact is that leaders across the Muslim and Arab world are not going to allow Trump to hand Jerusalem to Israel unilaterally, simply to satisfy his small base of US Christian Zionist evangelicals (he received the support of less than a quarter of American Jews). And, indeed, Mohammad Shtayyeh, a member of the Fatah central committee, has already pledged that the Palestinian leadership, in coordination with Jordan and other Arab states, will resist the dictate. 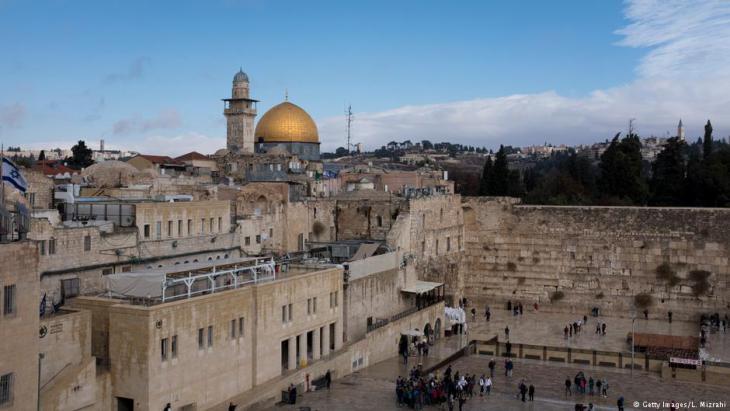 "Moving the US embassy to Jerusalem is a far more powerful symbolic move, suggesting that it could spur even more formidable resistance – and not just from the 300,000 Palestinians who live in East Jerusalem, or even from the more than 12 million Palestinians around the world, writes Daoud Kuttab. Pictured here: the Dome of the Rock and the Wailing Wall in Jerusalem

Yet it is not just Arabs or Muslims who support the Palestinians' just demands for a fair peace agreement. Innumerable people worldwide – of all faiths and backgrounds, as well as resolutions by the UN Security Council, the UN General Assembly and the International Court of Justice – also support this stance. This is true even in the US: according to a poll released by the Arab American Institute, only 20 per cent of Americans (including American Arabs and American Jews) favour moving the US embassy from Tel Aviv to Jerusalem.

The Palestinians are calling for a two-state solution, with East Jerusalem as the capital of a Palestinian state and West Jerusalem as the capital of Israel. The Israelis, by contrast, have consistently thwarted a two-state solution and demanded to have Jerusalem all to themselves. In short, it is the Israeli government's position – and that of the Trump administration – that must change, if the Israeli-Palestinian conflict is ever to be resolved.

Many in Israel recognise this: 25 prominent Israelis, including former diplomats, army generals and academics, signed a letter to Trump's Middle East peace envoy denouncing the Jerusalem decision. "The status of Jerusalem," they wrote, "lies at the core of the Israeli–Palestinian conflict and must be determined within the context of resolving that conflict."

Any viable peace deal must be able to stand the test of time. And that means it must be fair and just, rather than leaving one party seething with resentment – especially if that resentment extends to millions of people worldwide. Attempting to ram a solution down Palestinians' throats will increase the likelihood of even more violence, not peace.

Daoud Kuttab, a former professor at Princeton University and the founder and former director of the Institute of Modern Media at Al-Quds University in Ramallah, is a leading activist for media freedom in the Middle East.

Joe Biden promised to make democracy and human rights central to US foreign policy. But that means not insisting on Israel's right to defend itself without mentioning its ... END_OF_DOCUMENT_TOKEN_TO_BE_REPLACED

As the Biden administration attempts to promote democracy and human rights in the Middle East, it will confront the deep-seated belief among Arabs that U.S. policies are unfair to ... END_OF_DOCUMENT_TOKEN_TO_BE_REPLACED

Ben Aylon’s debut international album sees him elevate the traditional music and instruments of Senegal and Mali into a fresh contemporary setting. Seven years in the making, " ... END_OF_DOCUMENT_TOKEN_TO_BE_REPLACED

Years ago, the International Holocaust Remembrance Alliance formulated how hatred of Jews can be recognised. Now a new definition is causing controversy. By Sarah Judith Hofmann END_OF_DOCUMENT_TOKEN_TO_BE_REPLACED

When it comes to talent, Palestine may well be able to compete with other football teams in the region, but growth and development are hampered by the situation in the Palestinian ... END_OF_DOCUMENT_TOKEN_TO_BE_REPLACED

The change in U.S. president is also having an impact on the conflict between Turkey and Greece. Since the USA has started to play the Greek card, the strategic situation in the ... END_OF_DOCUMENT_TOKEN_TO_BE_REPLACED
Author:
Daoud Kuttab
Date:
Mail:
Send via mail

END_OF_DOCUMENT_TOKEN_TO_BE_REPLACED
Social media
and networks
Subscribe to our
newsletter