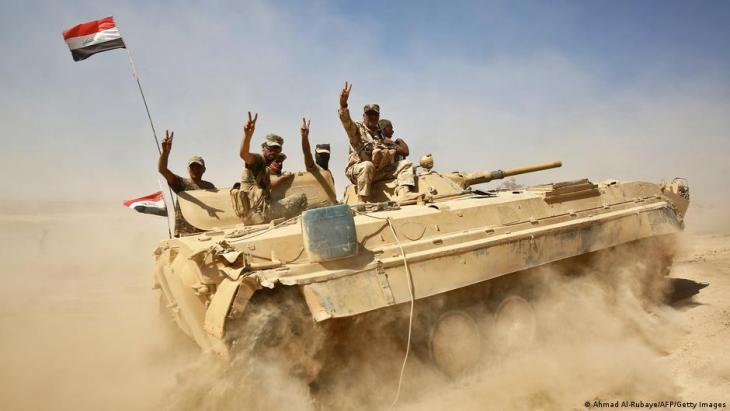 US withdrawal from Iraq
Not Afghanistan: Why the US and Iraq won't leave one another

While agreeing last week to a withdrawal of US combat troops from Iraq, neither Iraqi nor US leaders can admit publicly how much they need each other. By Cathrin Schaer

Last week, the heads of the Iraqi and US governments agreed to conclude the American combat mission in Iraq by the end of the year. The decision was made by US President Joe Biden and Iraq's Prime Minister Mustafa al-Kadhimi after they met in Washington on 26 July.

"The security relationship will fully transition to a training, advising, assisting and intelligence-sharing role," said a joint statement, issued by both countries after what was called a "strategic dialogue".

The statement also noted that bases used by US personnel were "Iraqi bases and are operating per existing Iraqi laws" and that any international soldiers were there strictly to help in the fight against the extremist group known as the "Islamic State" (IS).

The agreement comes as no surprise to observers and locals, because it is the indirect result of events in January 2020.

On 3 January of that year, senior Iranian military leader Qassem Soleimani and a senior Iraqi military leader, Abu Mahdi al-Muhandis, were killed by a US drone strike as they were leaving Baghdad airport. Both men were senior commanders of the semi-official, Iran-backed militias known as the Popular Mobilization Forces (PMF) in Iraq. 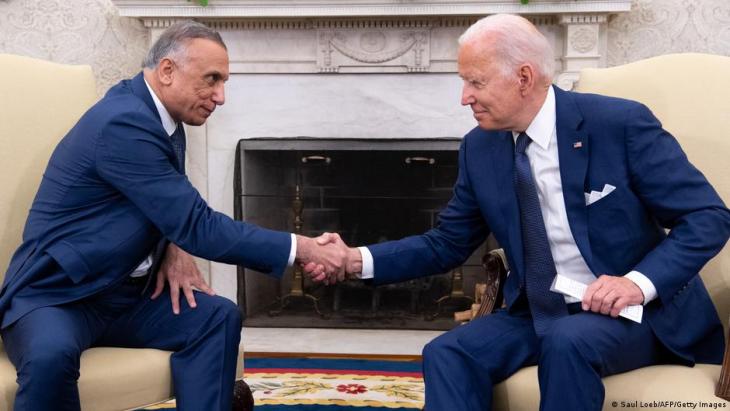 Iraqi Prime Minister Mustafa al-Kadhimi (left) and US President Joe Biden shake hands on their agreement to end the US combat mision in Iraq. "The security relationship will fully transition to a training, advising, assisting and intelligence-sharing role," said a joint statement, issued by both countries, which added "There will be no US forces with a combat role in Iraq by December 31, 2021."

Angered by the extrajudicial assassination on Iraqi soil, local politicians voted later in January to expel all US soldiers. This week's decision is the result of that non-binding parliamentary vote.

However, as has been noted elsewhere, despite the fanfare with which this conscious uncoupling was announced, this isn't a wholesale withdrawal of the drastic kind recently experienced in Afghanistan. The decision is more likely to see US troops shuffled around and their roles redefined than any reduction in troop numbers. There are currently around 2,500 US soldiers in the country.

The New York Times described the new agreement as "a set piece of diplomatic theatre", and Sabereen News, a channel on the Telegram messenger service dedicated to the PMF, exclaimed angrily: "No American soldier will be withdrawn ... their description will be changed on paper!" Sabereen issued several messages saying they would continue to fight US forces, using the hashtag #الانسحاب_بشروط_المقاومة, or "#withdrawal on our terms."

So why all the theatrics? Most likely because ongoing tolerance for the US presence in Iraq is a kind of open secret, something that almost everyone in power tacitly agrees upon but that politicians on all sides won't talk about publicly.

"Most Iraqi leaders, including those who don't say it openly, do recognise the importance of having the US there," Renad Mansour, director of the Iraq Initiative at London-based policy institute Chatham House, told DW. "And very few Iraqi leaders, including some armed leaders, want the US to completely withdraw and sever ties," he explains, referring to leaders of the Iran-backed militias thought to be behind ongoing drone attacks on bases used by US troops as well as on US supply convoys.

"More generally, the US also provides cover for much of Western representation in Iraq," Mansour confirmed. If the US left altogether, it's likely that other countries like the UK and Germany would follow suit. If that happened, Iraq would become "a pariah state", Mansour added, "one that's closed off to the world."

And this is not something that even Iran – the US' avowed adversary in Iraq – necessarily wants. Iran also benefits from having neighbouring Iraq open to the world when Iran itself is beset by sanctions and shunned by much of the international community, Mansour noted. 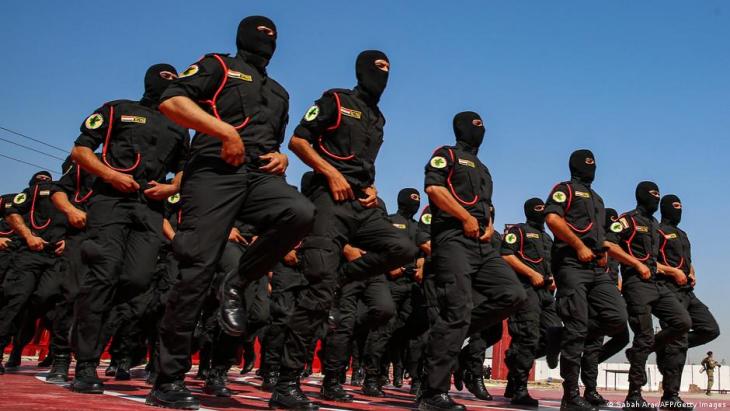 According to a May 2020 report compiled by analysts from the California-based research organisation Rand, a complete withdrawal would damage US interests. After examining various options for the US presence in the country, it concluded that the best answer for America lay somewhere in the middle, with the maintenance of a small force of advisers and trainers. Pictured here: members of Iraq's counterterrorism services, which were trained by the US

"The US forces are seen as creating a balance and deterring Iran," a senior source inside the Iraqi government told DW; they had to remain anonymous as they did not have permission to speak to the media. Iraq's political system is balanced between its three major demographic groups – Shia Muslims, Sunni Muslims and the Kurds — and if US forces withdraw altogether, the Sunni Muslims and Kurds worry that Iran-backed Shia Muslim forces would fill any security vacuum.

Announcing this week's decision, Prime Minister al-Kadhimi said that Iraq no longer needs combat troops. "And this is true," the senior official agreed. "But in practical terms, we still need US forces here, particularly when it comes to air cover and combat aircraft. The Iraqi air force is comparatively weak, and if it wasn't for the US Air Force, the country would be far more vulnerable to external drone attacks, and it would also have difficulty mounting aerial attacks on the IS group. The Iraqi military also needs the US' intelligence on the IS terrorists."

Perhaps most important, though, is the training, the senior official argued. "We need to make sure our army is neutral, strong and professional. If their capabilities decline, then again that would favour the [Iran-loyal] paramilitaries."

As for the US, a complete withdrawal would damage American interests, too, analysts from the California-based research organisation Rand concluded in a May 2020 report on that country's options in Iraq. After looking at various possibilities, including complete withdrawal, Rand researchers wrote that the best answer for America lay somewhere in the middle, with the maintenance of a small force of advisers and trainers.

"Supporting a stable and friendly Iraq is in the continuing long-term interest of the US," they argued. "Long-term presence also sustains US influence in Iraq, which, in turn, can help to blunt Iranian, Russian and other malign influence."

US troops have been in Iraq since 2003, when around 125,000 American soldiers arrived in March of that year, ostensibly to destroy "weapons of mass destruction." The invasion toppled Iraq's long-standing dictator, Saddam Hussein.

After President Barack Obama took office in 2009 with promises to pull out of Iraq, numbers began to fall steadily. And US troops have supposedly been "transitioning to an advisory role" for years now, as foreign policy observers have pointed out on Twitter. The same sort of language was being used as far back as 2007 and 2009.

The emergence of the "Islamic State group in Iraq and Syria in 2014 saw Iraq's need for US military aid increase once again. Unable to mount a significant defence at first, the Iraqi army and Iraqi Kurdish forces were heavily dependent on US aerial strikes to fend off the extremists. Around 5,000 US soldiers were in the country at that stage. The IS extremists have since been more or less defeated, so this number has steadily reduced. Late last year President Trump decreased the total to 2,500.

As for ordinary Iraqis themselves, Monday's purely political agreement is unlikely to change much for them. Once-ubiquitous American checkpoints have long gone. Now, city checkpoints are mostly manned by Iraqis, soldiers or members of the PMF. And other than hearing about US drone or aerial strikes, most ordinary Iraqis haven't seen an American soldier in the flesh for years.

Just as the Islamic Revolution fundamentally changed Iran 43 years ago and had an impact far beyond the country's borders, the current wave of protests sweeping the country is set ... END_OF_DOCUMENT_TOKEN_TO_BE_REPLACED

One year ago the Taliban returned to power, seizing Kabul; the U.S. and its allies made a panicked exit from the country. Of all the books written on the subject, four stand out ... END_OF_DOCUMENT_TOKEN_TO_BE_REPLACED

Jonas Poher Rasmussen's Oscar-nominated animated documentary “Flee” focuses on the life of a refugee from Afghanistan. Based on a true story, it centres around the question: when ... END_OF_DOCUMENT_TOKEN_TO_BE_REPLACED

The Biden administration could have used Pakistan’s economic crisis to compel the country to sever its longstanding ties to terrorist groups. Instead, the U.S. protects and ... END_OF_DOCUMENT_TOKEN_TO_BE_REPLACED

No country in the Islamic world is influenced as strongly by the traditions of Sufi culture as Pakistan. Yet the Sufis there have been under attack from Islamic hardliners for ... END_OF_DOCUMENT_TOKEN_TO_BE_REPLACED

END_OF_DOCUMENT_TOKEN_TO_BE_REPLACED
Social media
and networks
Subscribe to our
newsletter