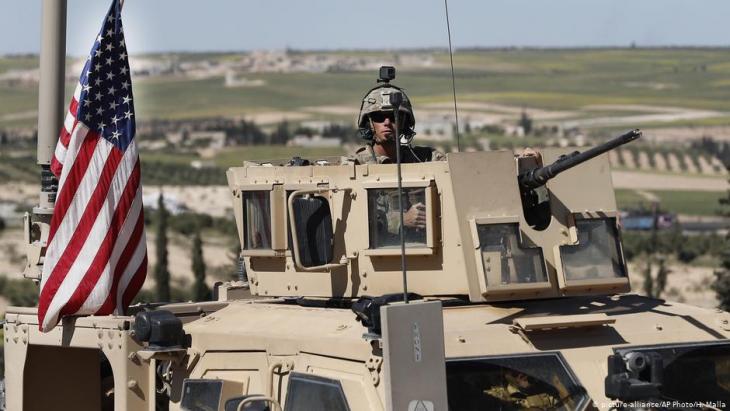 U.S. withdrawal from Syria
The U.S. is still needed in Syria

By rushing out of Syria now, the Trump administration is ceding the field to Russia, Turkey and Iran, all but guaranteeing another regional conflagration in the near future. By leading a new diplomatic effort to end the conflict and begin reconstruction, Trump could both extricate the US from the conflict and help stabilise the region. By Charles A. Kupchan and Sinan Ülgen

While the world frets about a possible conflict between the United States and Iran, the bloodshed in Syria is escalating once again. Syrian President Bashar al-Assad's regime has intensified its onslaught against the remaining opposition stronghold in Idlib Province, which is home to some three million people, including many who have been internally displaced. To avoid a new humanitarian nightmare and another mass exodus of refugees, the US must renew its peacemaking efforts.

Since a U.S.-backed coalition of (mostly) Kurdish forces succeeded in dismantling the Islamic State's (IS) territorial caliphate, the U.S. has begun walking away from Syria. Late last year, US President Donald Trump announced the withdrawal of US troops there, effectively ceding negotiations over the country's future to Russia, Iran and Turkey.

It is now clear that Trump jumped the gun. The renewed fighting in Idlib is a potent reminder that Syria remains a tinderbox. Almost one-third of the country is controlled by a Kurdish-led militia that Turkey regards as a mortal enemy. Owing to America's support of the Kurds and Turkey's decision to purchase Russian anti-aircraft missiles, U.S.–Turkish relations are near a breaking point.

Meanwhile, Russia has orchestrated its return to the region by backing the Assad regime, and Iran has established a Syrian foothold of its own, enhancing its regional influence and increasing the prospect of war with Israel. Instead of ignoring these risks, the U.S. needs to get back in the game of shaping Syria's future. 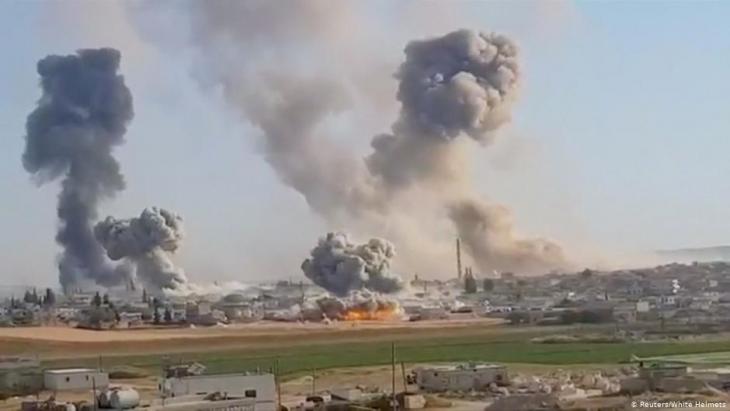 "While the world frets about a possible conflict between the United States and Iran, the bloodshed in Syria is escalating once again," write Charles A. Kupchan and Sinan Ülgen. Fighting between the Syrian military and rebels in north-western Syria continues, and it is civilians who are suffering the most. Pictured here: heavy fighting near Khan al Subul in the Syrian province of Idlib

As a first step, it should launch a new contact group that includes Turkey, Russia, the European Union and the United Nations. The initiative should have three critical objectives, the first of which is to pressure the Assad regime to end the violence and accept a decentralised state in exchange for international help with reconstruction.

To end the conflict, the regime must abandon its offensive in Idlib, and the opposition groups clustered there must agree to disarm and stand down. The political framework for peace and stability in Syria will require a new constitution that provides for a significant measure of regional devolution, while preserving the Syrian government’s monopoly over the use of force. Allowing a potpourri of autonomous militias to remain in operation would almost certainly lead to a failed state.

For the international community, marshalling the reconstruction assistance that would accompany this political compact should be a top geopolitical and humanitarian priority. Failure to rebuild Syria's war-torn communities and restore the state's capacity to deliver essential services would leave the door open to an extremist resurgence. Groups like IS prey on social distress. To start the process, the EU, backed by the UN, should take the lead on overseeing the return of refugees, raising the needed resources, and implementing a programme of post-conflict reconstruction.

The contact group's second goal should be to strike a deal with Syria's main Kurdish party, the Democratic Union Party (PYD). In exchange for regional autonomy within a decentralised Syrian state, the PYD would end its alignment with the Kurdistan Workers' Party (PKK), which has been waging a separatist terror campaign inside Turkey for decades. Provided that the PYD has broken ties with the PKK, the contact group should then spearhead a stabilisation plan for the Kurdish region of Syria. 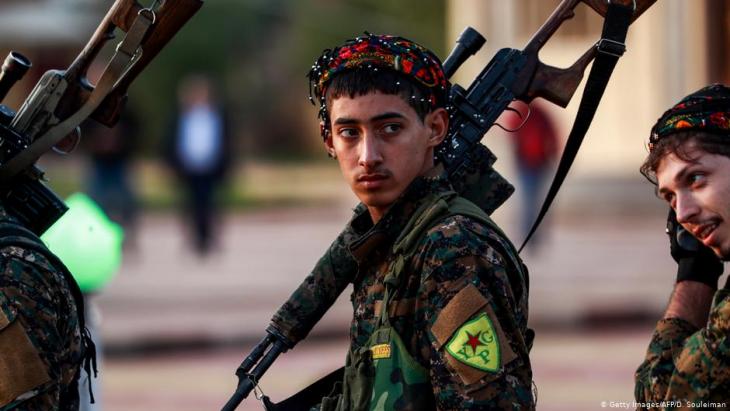 Between a rock and a hard place: the withdrawal of US troops leaves Syria's Kurds in a very exposed position between Turkey and Syria. According to Kupchan and Ülgen, the US "has an obligation to secure the political rights of Syria's Kurds, who led the fight against IS". It should also, they write, reclaim heavy weapons given to the Kurds, press the PYD to restore local control to communities and help keep Kurdish fighters away from the Turkish border. Pictured here: a Kurdish YPG soldier

The U.S., for its part, has an obligation to secure the political rights of Syria's Kurds, who led the fight against IS. But it also must repair its relationship with Turkey. The only way it can do both is to broker a rapprochement between Turkey and the PYD. To that end, the U.S. should honour its pledge to reclaim heavy weapons that it previously transferred to the Kurds, and press the PYD to restore local control to the communities it occupied during the campaign against IS. The U.S. also needs to help keep Kurdish fighters away from the Turkish border, which could be accomplished with a safe zone in northern Syria – a proposal that is currently under discussion in Ankara and Washington. The Turkish government's recent re-engagement in direct dialogue with the PYD leadership is an encouraging sign.

The contact group's third objective should be to reduce, if not eliminate, Iranian influence in Syria. With its forces and proxies on the ground, not to mention its considerable leverage over the Syrian government, Iran can stir up trouble not only in Syria, but also in Iraq, Lebanon and Israel. Simply establishing a new contact group would reduce Iran's diplomatic clout by barring it from the main forum for negotiating Syria's future. Beyond that, the group should also make the delivery of reconstruction assistance contingent upon Assad distancing himself from the Iranians.

Trump is right to want out of Syria. But to extricate itself from the conflict, the U.S. must first initiate a new diplomatic peacemaking effort. If Trump walks away prematurely, Syria will be left chronically unstable, and thus vulnerable to a revival of radicalism. Moreover, America's break with Turkey will have passed the point of no return, Russia will have an unchecked proxy in the Middle East, and Iran will be empowered to foment chaos across the region. The conditions would be ripe for a renewed conflict that drags the U.S. back into the region at an even higher cost. The choice is an easy one.

Charles A. Kupchan and Sinan Ülgen

Home
Print
Newsletter
More on this topic
Syrian conflict: The war in Syria is not overTrump’s Syria withdrawal: A chance for peace?The end of the "Islamic State": Entering a new chapter in SyriaThe Kurdish YPG and the future of north-eastern Syria: Assad smiles from the sidelines
Related Topics
'Islamic State' | IS, Assad regime, Donald Trump, Islam and the West, Kurdish-Turkish Conflict, Kurds, Recep Tayyip Erdogan, Syrian Civil War, U.S. policy in the Middle East
All Topics

When is it and when is it not acceptable to display a political banner at the World Cup in Qatar? The answer seems to depend largely on the political message, with fans ... END_OF_DOCUMENT_TOKEN_TO_BE_REPLACED

The Kurds are under attack from two sides: from Turkey, and from Iran. The situation in their territories in northern Iraq is becoming increasingly desperate. Birgit Svensson ... END_OF_DOCUMENT_TOKEN_TO_BE_REPLACED

Iranians do not want an Islam that interferes. They are fed up with a system that manipulates people with simple promises of salvation and anti-Western propaganda. Islamic ... END_OF_DOCUMENT_TOKEN_TO_BE_REPLACED

"The Voice of Dust and Ash" draws us into the life and times of Iranian maestro Mohammad Reza Shajarian with passion and joy, focusing on the man who stood, and still stands, for ... END_OF_DOCUMENT_TOKEN_TO_BE_REPLACED

November 2022 sees the Arab world firmly in the spotlight with the COP27 in Egypt and the FIFA World Cup in Qatar. Public trust in MENA governments is weak, thanks to their ... END_OF_DOCUMENT_TOKEN_TO_BE_REPLACED

In Iran, two famous actresses, Hengameh Ghaziani and Katayoun Riahi, were arrested recently. These days anyone who shows solidarity with the protesters is a target to be silenced ... END_OF_DOCUMENT_TOKEN_TO_BE_REPLACED
Author:
Charles A. Kupchan and Sinan Ülgen
Date:
Mail:
Send via mail

END_OF_DOCUMENT_TOKEN_TO_BE_REPLACED
Social media
and networks
Subscribe to our
newsletter