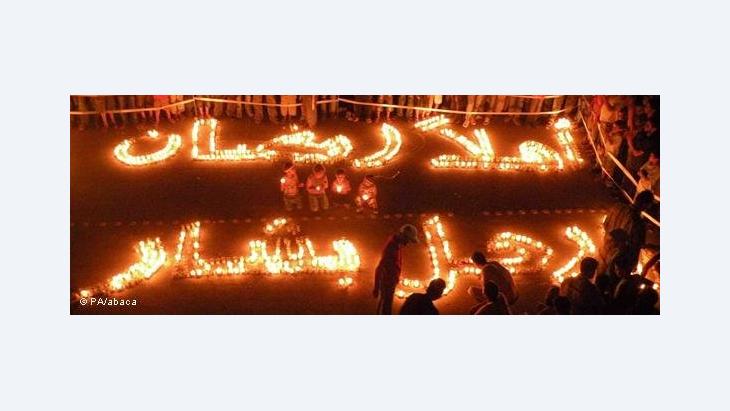 The government in Damascus enforces bloody crackdown on its own people during the holy month. The regime is at war with its own people and is trying to devise new explanations for the protest wave. Svenja Andersson reports

For more than four months now, rulers in Syria have failed to come up with any kind of new response to the protests against them, and continue to try and crush the movement by violent means. Dissident circles in Damascus say that 12,600 people have been detained, and 3,000 are missing. 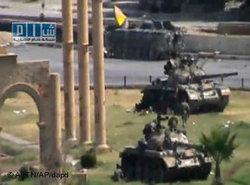 ​​The government say 1,500 civilians and 350 members of the security forces have been killed. More than 140 people have lost their lives since the start of Ramadan. These are horrific statistics.

When the protests began, the city of Deraa on the Jordanian border became the first location to stage a government military operation against the demonstrations. Now the city of Hama has become the central flashpoint. Violent clashes have also taken place in Homs and Lattakia, but also in parts of the capital Damascus. Deir al-Zour, in the northeast of the country, has also repeatedly been the scene of bloody conflict. Now, even the most well-disposed to Syria must have realised that the regime is at war with its own people.

Officially, the justification for this brutal approach is that the government is fighting a conspiracy driven from abroad. Syrian state television reports that "armed bands", steered from abroad, are trying to destabilise the Damascus regime. But the diversity of the protests makes a nonsense of this explanation.

While in Deraa it is for the most part Sunni-Arab tribal leaders taking part in the uprising against the central government in Damascus, most of the residents of Deir al-Zour are of Kurdish origin. They have been in a clinch with the ruling Assad clan for a long time now – their demands for more rights and autonomy earning them persecution, death and imprisonment for decades.

Hama also has a long tradition of rebellion. It was here that the fundamentalist Muslim Brotherhood revolted against the Damascus leadership in 1982. President Hafez al-Assad sent tanks into the city and ordered them to fire on demonstrators. His son Bashar now appears to be repeating the pattern. Then, just as now, hundreds of people have paid with their lives. Not to mention the thousands of people who have been injured.

In the tradition of resistance against the Assad clan: The Islamist Muslim Brotherhood rebelled against President Hafiz Al-Assad in the central Syrian city of Hama in 1982, when the protest was brutally crushed by the regime. Participants in today's protest movement are however from all walks of life and with a variety of political affiliation

But while almost 30 years ago, Hama remained an isolated case, today's protest is nationwide. Dissident leaders claim that as more and more demonstrators are killed, this is encouraging countless new protesters to take to the streets in defiance.

The government has now apparently realised that their argument is looking shaky, and is attempting to find a new justification for the protest, while at the same time trying to the movement.

Fanning the flames of ethnic and religious conflict

Bassel Oudat is one of the few foreign correspondents to be currently living in Damascus and reporting directly from Syria. The Egyptian journalist has discovered that at the moment, the protests are being increasingly blamed on ethnic and religious issues. For example just a few days ago, presidential adviser Bothayna Shaaban explained that the demonstrations were a "sectarian plot" and had nothing to do with peaceful protest. The rallies represented an attack on the co-existence of different ethnic and religious groups in Syria, she said, and described the protesters as Salafists and radical Islamists.

Bassel Oudat has observed something quite different. He says that at present, members of all ethnic and religious groups are taking to the streets of Syria in protest at the dictatorship and years of repression – "with no exception". In Homs, Syria's third-largest city, he saw banners emblazoned with the words "We are all Syrians and together we demand the ousting of the regime", and heard slogans calling for national unity. 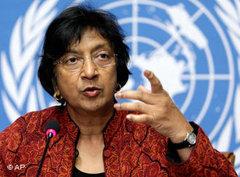 UN High Commissioner for Human Rights Navi Pillay has called for an immediate halt to the violence in Syria. She said the world was a witness to the Syrian government's brutal treatment of civilians

​​Oudat accuses the Damascus leadership of deliberately aiming to fan the flames of ethnic and religious conflict, rather than admit that broad swathes of the population are rebelling against it and questioning its legitimacy. He fears that the clashes could become even more violent over the coming weeks.

Nothing but lip service

By bringing down the stick so hard and so often on his own people, President Bashar al-Assad's carrot, held up in the air on occasion, is starting to resemble a last meal. First, he raised the prospect of greater freedom for the Kurds, and even promised to restore Syrian citizenship to those who had been stripped of it due to their political activities. Then he lifted the state of emergency that had been in place since 1963, and finally announced a new party law.

But all this has been dismissed as a farce by the opposition, and derided as empty statements with no substance. And indeed up to now, not one of the promised reforms has been implemented.

Instead, Syrian security forces received reinforcements from Iran, in order to move "more effectively" against the demonstrators. Diplomatic observers in Damascus are even talking of the Tehran syndrome, and drawing parallels with Iran's post-election "Green Revolution" two years ago. But unlike in Libya, where the international community launched a relatively rapid intervention placing itself on the side of the reformers, reactions to the situation in Syria have been restricted to nothing but lip service. 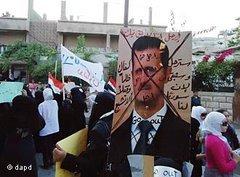 "Down with the Assad regime!" Every death and detention heightens displeasure at the Baath dictatorship of Bashar Al-Assad: Demonstration on 19 July in a Damascus suburb

Germany is now trying for the third time to push through a resolution at the UN Security Council. Members are also threatening to tighten sanctions against Syria.

But these sanctions have been periodically tightened since the Iraq war in 2003, a move that appears to have left little impression on Assad and his cronies. Unlike in the case of Libya, when the Arab League – led by the Gulf State of Qatar – reached swift agreement in condemnation of ruler Gaddafi and along with western states demanded that he step down, the situation in Syria has been met with stony silence. Protesters in Hama carry banners with the words: "Your silence is killing us!" – a direct criticism of the conduct of Arab neighbours.

Education is the key to the future. Muzoon Almellehan has known this since she was 14 years old. But she lives in a Jordanian refugee camp. And since then she has been fighting ... END_OF_DOCUMENT_TOKEN_TO_BE_REPLACED

The Kurdish YPG militia did the heavy lifting in the fight against the "Islamic State", yet many foreign YPG adherents, including Germans, have come home to find themselves under ... END_OF_DOCUMENT_TOKEN_TO_BE_REPLACED

The terror attacks in Paris, Brussels and Berlin were all carried out by men radicalised in jail. In Germany, politics and the judiciary are trying out new approaches to prevent ... END_OF_DOCUMENT_TOKEN_TO_BE_REPLACED

The assassination of the Iranian general Qassem Soleimani in a surprise U.S. drone strike is being used by the Islamic Republic of Iran to political ends, says Iranian journalist ... END_OF_DOCUMENT_TOKEN_TO_BE_REPLACED

With "Assad or We Burn the Country", Sam Dagher has furnished the world with some genuine ammunition against the Syrian regime's on-going campaign of disinformation. The only ... END_OF_DOCUMENT_TOKEN_TO_BE_REPLACED

There are only a few thousand Aramaic Christians left in south eastern Anatolia. And they are intent on preserving their ancient culture dating back one-and-a-half millennia. ... END_OF_DOCUMENT_TOKEN_TO_BE_REPLACED
Author:
Svenja Andersson
Date:
Mail:
Send via mail