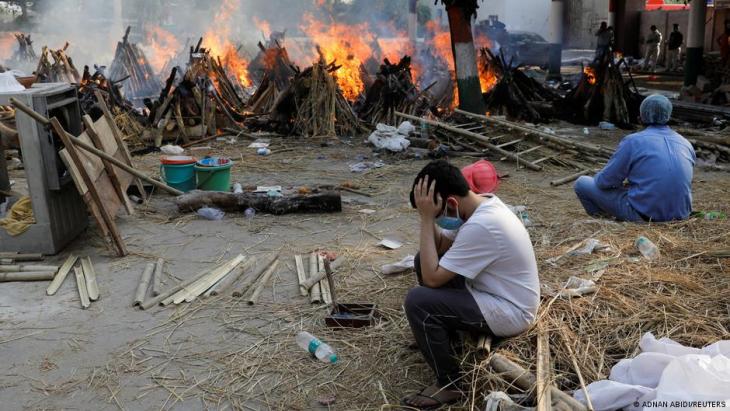 "We are witnessing a crime against humanity"
The Guardian: Arundhati Roy on India’s COVID catastrophe

It’s hard to convey the full depth and range of the trauma, the chaos and the indignity that people are being subjected to. Meanwhile, Modi and his allies are telling us not to complain. By Arundhati Roy

During a particularly polarising election campaign in the state of Uttar Pradesh in 2017, India’s prime minister, Narendra Modi, waded into the fray to stir things up even further.

From a public podium, he accused the state government – which was led by an opposition party – of pandering to the Muslim community by spending more on Muslim graveyards (kabristans) than on Hindu cremation grounds (shamshans).

With his customary braying sneer, in which every taunt and barb rises to a high note mid-sentence before it falls away in a menacing echo, he stirred up the crowd. “If a kabristan is built in a village, a shamshan should also be constructed there,” he said.

Perhaps he is happy now that the haunting image of the flames rising from the mass funerals in India’s cremation grounds is making the front page of international newspapers.

And that all the kabristans and shamshans in his country are working properly, in direct proportion to the populations they cater for, and far beyond their capacities.

COVID-19 and the double mutation: At the heart of India's coronavirus firestorm

Interview with Indian novelist Arundhati Roy: "India is much more dangerous than it was ten years ago"

Dispute about the temple to Lord Ram in Ayodhya: The end of India's post-colonial consensus

India is generally considered to be the world’s largest democracy. As civic freedoms are being eroded, international experts now consider it seriously under threat. By Mira Mandal END_OF_DOCUMENT_TOKEN_TO_BE_REPLACED

COVID-19 has many negative impacts on children, particularly in terms of education and healthcare. Development projects in the Indian state of Assam show how actors can ... END_OF_DOCUMENT_TOKEN_TO_BE_REPLACED

Every year in December, the team at Qantara.de takes a look back at the articles that proved most popular with our readers. This year is no different. Here is a run-down of the ... END_OF_DOCUMENT_TOKEN_TO_BE_REPLACED

Four musicians – two Iranian, two Indian – have created an album of music inspired by the poetry of Rumi. Like the poet's works, the album advocates tolerance, inclusivity and ... END_OF_DOCUMENT_TOKEN_TO_BE_REPLACED

In 1971, Bangladesh seceded from Pakistan after a bloody civil war to become independent. But the events of that time are still largely taboo today. A reappraisal of this central ... END_OF_DOCUMENT_TOKEN_TO_BE_REPLACED

For Western listeners, the sound of the sitar is perhaps the most cliched musical symbol of India. Sitar player Hindol Deb, who lives in Cologne, Germany, has just released his ... END_OF_DOCUMENT_TOKEN_TO_BE_REPLACED
Date:
Mail:
Send via mail

END_OF_DOCUMENT_TOKEN_TO_BE_REPLACED
Social media
and networks
Subscribe to our
newsletter