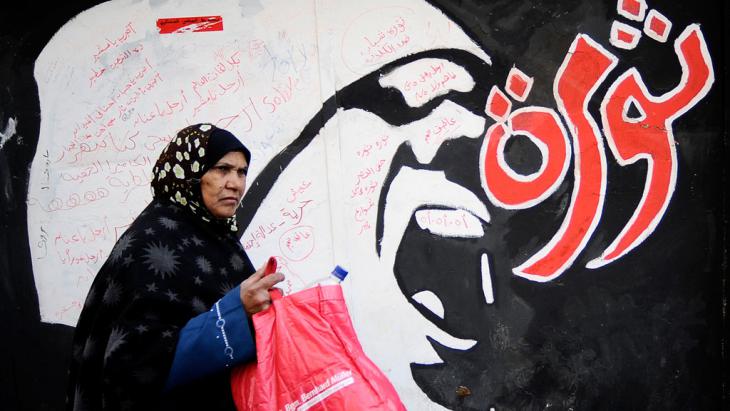 Where is Egypt's left heading?

"The political arena is closed"

Nearly three years after the army seized power, Egypt's regime-critical opposition finds itself with its back to the wall. Politically marginalised left-wing parties and movements are now trying to maintain their ability to act by forging close alliances. Will this really allow afford them political influence in the longer term? Sofian Philip Naceur reports from Cairo

Repression is once again the order of the day in Egypt. Activists are arrested and put on trial, protests are de facto prohibited. Even verbal expressions of displeasure with President Abdul Fattah Al-Sisi and his policies are subject to prosecution. Any form of opposition is consistently and ruthlessly silenced.

"The political arena is closed," remarked the leader of the Socialist People's Alliance (SPAP), Medhat Zahed, as early as April 2014. At the time, his party and other liberal forces took advantage of the presidential campaign to promote an alternative to both the Islamist agenda of the Muslim Brotherhood and also military rule. This would prove to be their last opportunity for the time being to openly oppose al-Sisi's policies. Because today, two years after he took office, the opposition's ability to agitate is more restricted than ever.

The journalist and former speaker for the Constitution Party Khaled Dawoud is one of those expressing frustration at the current state of affairs. "Without wanting to criticise, the president is acting like an army commander at war and the opposition has no room to manoeuvre," he maintains. There was some hope that a more open political climate would be forthcoming in the country after al-Sisi's controversial announcement that the islands of Tiran and Sanafir in the Red Sea would be ceded to Saudi Arabia.

The resulting protests on 15 April were far bigger than expected, says Dawoud. This sent a clear message to al-Sisi that people are again willing to take a stand in public that diverges from the official line. But then the state crackdown on the second wave of protests on 25 April made it amply clear to the opposition that open criticism of the regime will still not be tolerated. 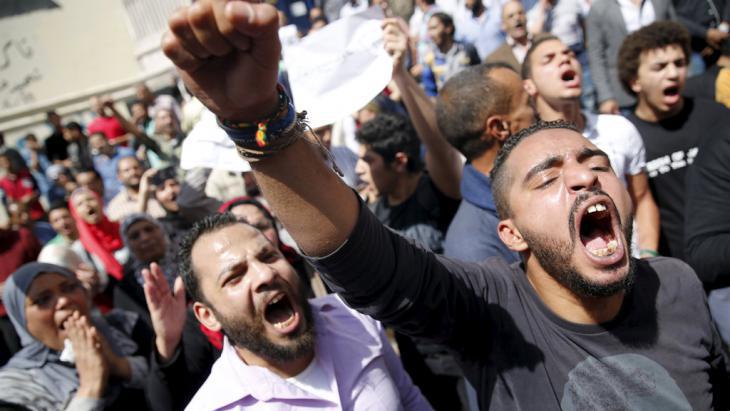 The criminal prosecution in the wake of the protests also poses a financial problem for the opposition, confirms Dawoud. Dozens of activists, among them members of the Constitution Party, the Trotskyist Revolutionary Socialists and the liberal April 6 Youth Movement, were sentenced not only to prison but also to high fines amounting to approximately 10,000 euros. Egypt's justice system is thus helping to quash the liberal opposition using financial means as well.

This is another reason why the Constitution Party finds itself in such straits, according to Dawoud. "The general atmosphere in the country by no means encourages parties to be politically active, in particular those in the opposition. Ultimately, a party needs financial resources, a free press and the possibility to express itself, but all of this is currently missing," the journalist stresses.

The parties and movements involved in the campaign against the island agreement with Riyadh are nonetheless carrying on with their work and organising sit-ins and information events. The protests in April and the joint campaign work have once again brought the left-wing camp closer together – even across ideological barriers. In addition to left-wing, anti-capitalist parties such as the SPAP, Al-Karama, the Popular Current and the Revolutionary Socialists, other parties including the April 6 Movement, the Constitution Party and the Egyptian Social Democratic Party have joined forces to form the Democratic Current, an informal opposition alliance.

This co-operation is nothing new, though, emphasises Ayman Abdelmeguid, member of the politburo of the April 6 Youth Movement. In fact, since the beginning of the revolution in 2011, socialists and Trotskyists as well as liberal and social democratic forces have repeatedly formed coalitions. At first they banded together with the Muslim Brotherhood against military rule and starting in 2013 they allied themselves with forces close to the regime to oppose the Islamist policies of ex-President Mohammed Morsi. 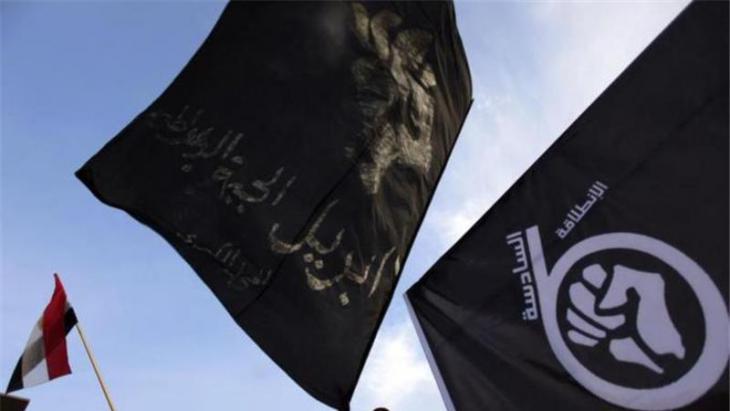 Lost impetus: the April 6 Youth Movement, now banned by the Sisi regime, played a key role in the uprising against Mubarak, which began with mass demonstrations on 25 January 2011

Ever since he was deposed, however and the army rose to power, the left-wing opposition has been largely isolated. And it is likely to remain that way for the time being, because the rifts between Islamists and left-wing liberals are simply too deep, as are those between forces close to the regime and those critical of the military.

An alliance of left and liberal groups

An essential factor bringing together this latest iteration of the alliance of leftist, liberal and social democratic forces is once again the stifling influence of the army on the country's political sphere and the consequent rejection of it by anti-capitalist and social democratic parties. "Our goal is a civilian, democratic and modern state," says Farid Zahran, newly elected chairman of the Egyptian Social Democrats. "We can't say yet who will work shoulder to shoulder with us in the long term on achieving this objective, but we will not brook any compromises."

Egypt's Social Democrats see themselves as a kind of hinge in Egypt's partisan landscape. "We meet with left-wing parties, but also with liberal parties such as the Free Egyptians and the Al-Wafd Party." The Social Democrats want to build bridges and therefore also maintain contacts with parties close to the regime, which are shunned by leftist forces. "The only solution to the political and economic crisis is a dialogue between the parties, but also within society," says Zahran. "If we want to get the crisis under control, we must ultimately all sit down at the same table," he says.

Unlike in Europe, co-operation between Social Democrats and the left is not taboo in Egypt. Europe's Social Democratic parties lean to the right and those in the Third World to the left, says Zahran. Even the April 6 Youth Movement accepts a "soft-hearted capitalism" with a free market, as long as the poor do not get poorer, says Abdelmeguid. In terms of economic policy, this places them not too far from the left, he believes. Although the People's Alliance and the Revolutionary Socialists see things differently, the left-leaning tendencies of the Egyptian Social Democrats and the willingness to compromise on the part of regime-critical groupings has allowed for a revival of  informal left-wing liberal alliances since 2011.

Today, this alliance may even be of vital importance given the complete control of the political sphere and the media by regime-related forces and the continued police repression. Whether this "coherent working group", as Abdelmeguid refers to the alliance, has the potential to develop into a force to be reckoned with remains to be seen, however, depending to a large extent on how the regime frames its economic and social policies. If it remains committed to its current disastrous course, which is only exacerbating the country's social problems, the left-wing and liberal forces are likely to join forces in future as well.

Political analyst Taqadum al-Khatib argues that Egypt can, in co-ordination with its European partners, develop a common vision to solve the complex conflict in Libya. For this to ... END_OF_DOCUMENT_TOKEN_TO_BE_REPLACED

The upheavals of the past year in the MENA region are arguably as momentous as those of the Arab Spring in 2011. Yet perhaps the biggest difference is that our interest seems to ... END_OF_DOCUMENT_TOKEN_TO_BE_REPLACED

In 2019, the long-running Penguin Classics series released its first novel translated from Arabic: Tawfiq al-Hakim’s "Return of the Spirit", conveyed into English by William ... END_OF_DOCUMENT_TOKEN_TO_BE_REPLACED

Equality in divorce, a ban on polygamy: reformers of Islamic family law have a clear agenda. They are exploiting the ambiguity of traditional jurisprudence. By Joseph Croitoru END_OF_DOCUMENT_TOKEN_TO_BE_REPLACED