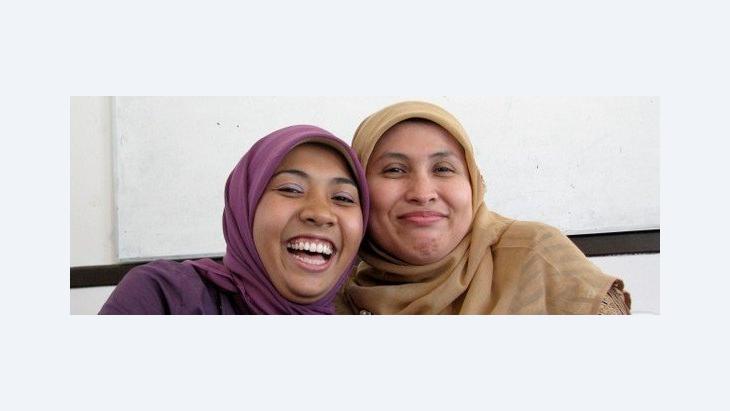 Women and Islam in Indonesia

﻿Women's agency is central to all aspects of Islamic life in Indonesia, yet female Muslim activists face opposition from ﻿fundamentalist exegetes. In her article ﻿says Susan Blackburn shows the diverse female faces of Indonesian Islam

In Indonesia, Islam is on the march. The country has been undergoing an Islamic revival since the 1980s, and religious activity of all kinds escalated in response to the freedom created by the fall of the authoritarian New Order regime in 1998.

There has been controversy about what the consequences are for women. In what ways have women benefited or suffered as a result of more Indonesians seeking to practise their religion more seriously?

Indonesia has the largest population of Muslims in the world, with almost 90 percent of its 240 million people identifying as Muslims. The country is now often held up to the rest of the Islamic world as an example of a moderate version of Islam.

Indonesian Muslim women are becoming more pious. We see women demonstrating a striking level of commitment in their search for religious knowledge through attending regular prayer meetings and other religious gatherings. Older women in Bandung often attend between four and six religious study groups a week, travelling all over town in their spiritual pilgrimages. One reason for the piety of these women is the concern they feel about social issues like corruption and rising crime: they believe that acquiring religious knowledge will help strengthen society against such perils. 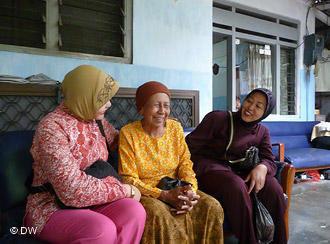 Devout women contribute to public face of piety in contemporary Indonesia. Their search for spiritual knowledge, however, and the way they spread it in their families is quite different to the religious pattern of men, writes Blackburn

​​The search for spiritual knowledge of these women and the way they spread it in their families, is quite different to the religious pattern of men, who, partly because they have less time, think it enough to attend the mosque once a week.

Another phenomenon is that Islamic magazines have become quite popular with Indonesian women. The content of these magazines reflects the interests of their urban middle class buyers: they want spiritual as well as practical advice on how to live as Muslim women with a social conscience. The magazines acknowledge that their readers are professional or semi-professional women who seek a modern form of Islam that supports their careers.

Within Indonesian Islam there are many streams, some of which are less well-known than others, including those concerned with mysticism. Women can be leaders within the Indonesian Sufi tradition, despite some obstacles. Such female leaders are careful not to challenge their male counterparts too openly.

Islamic revival and Islamic piety are often depicted as being the domain of men, with little attention given to what women are doing. Nevertheless, women are often more devout than men and the emergence of their religious leadership is one of the most interesting developments in Indonesia today.

Islamic feminism and polygamy in Indonesia

People concerned about the effect on women of negative trends in Indonesian Islam have focussed on a number of developments since the end of the New Order in 1998. One is the scope provided by decentralisation for local governments to adopt discriminatory regulations under the guise of combating public immorality. Another is the proposal and passing of the Anti-Pornography Law of 2008. This law contained a sweeping definition of pornography which put many women in danger of prosecution. 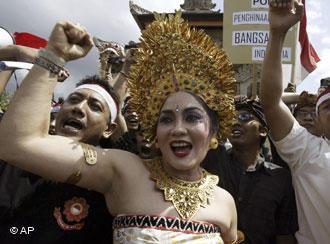 Pressured to conform to Islamic standards? Balinese Hindu women reacted very strongly against the Anti-Pornography Law which they interpreted as an attack on their culture

​​Many also accuse the central government of turning a blind eye to anti-woman practices and argue that polygamy is publicly tolerated in a way that it never was under the New Order, to the detriment of women. (According to the 1974 Marriage Law polygamy was restricted by various conditions most of which are now either overtly flouted or evaded by unofficial marriages – celebrated according to religious customs but not registered correctly.) Of great concern has been the decision of the central government in 2001 to allow the province of Aceh to adopt shariah law, a departure from national policy made to placate the separatist movement there.

Some Muslim groups and individuals contest these moves, usually adopting the argument that they are unsuited to Indonesia and derive more from Middle Eastern culture rather than being based on the spirit of Islam. According to moderate Indonesian interpretations, the religion is perfectly compatible with democracy and gender equality.

Indonesian Islam has long been distinct in various ways. One of the most striking is the existence of two huge, mass-based Islamic organisations, Muhammadiyah and Nahdlatul Islam (NU), whose origins go back to the early twentieth century. The differences between these organisations, usually seen as respectively modernist and traditionalist, have narrowed over the years, although Muhammadiyah's membership still tends to be more urban, more national and better educated, while NU's heartland remains the Javanese countryside. Both organisations have women's wings which encompass millions of members and which since the 1980s have been the site of some of the most interesting developments in gender relations within Indonesian Islam.

Within these organisations have emerged a number of feminists, both male and female, who have worked hard to make them more woman-friendly and to reform misogynous discourse. This is a distinctive feature of Indonesian Islam. Lies Marcoes-Natsir and Farha Ciciek Asegaf have been pioneers of Islamic gender-awareness since the 1980s. Both women were instrumental in creating space for feminist interpretations of Islam in Indonesia and for linking religion to women's rights. They have pursued these goals through various non-government organisations that they helped to establish. 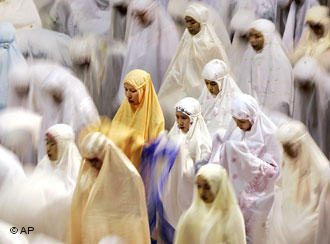 Women are often more devout than men and the emergence of their religious leadership is one of the most interesting developments in Indonesia today, writes Blackburn

​​Assisted by a number of other outstanding feminists, these two women have begun to turn around discriminatory teachings concerning women in NU's education system. Similar reforms have been pioneered within Muhammadiyah, and have even been carried into Indonesia's Department of Religion, by the redoubtable Siti Musdah Mulia who attempted (so far unsuccessfully) to reform the national Islamic legal code to create greater equality for women. The struggle of these feminists is ongoing, but cumulatively their efforts make Indonesia unique in the Islamic world.

Yet leaders like Lies Marcoes-Natsir and Farha Ciciek Asegaf face obstacles in their struggle for equality of Indonesian Islamic women. Apart from the opposition of hardliners in NU and Muhammadiyah, and of the vocal minority of small very conservative groups that have become more publicly visible since the fall of the New Order, there is also deeply rooted resistance in sections of society.

According to popular notions of Islam, reinforced by the Indonesian Marriage Law, only men are regarded as heads of households, making life difficult for women who are in fact the main source of support for their families. It is remarkably unfair that in Indonesia, where women have always worked both inside and outside the home, their contribution is ignored and even denigrated.

Conservative young Muslim women in Yogyakarta campaign against secularism, which they see as leading to Western immorality. Of particular interest here, given the campaigns of Islamic organisations like NU in favour of reproductive health, is the opposition of this conservative Muslim group to sex education for adolescents. Such groups seek to impose a very restrictive code of behaviour on young women. 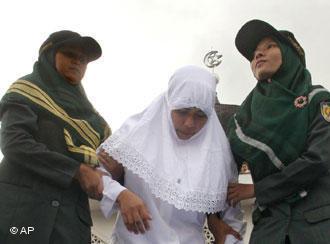 Pressure to conform to Islamic standards: In 2001 the central government allowed the province of Aceh to adopt shariah law, turning a blind eye to anti-woman practices like corporal punishment for "un-Islamic behaviour"

​​In Aceh, one of the most devoutly Islamic regions of Indonesia, women's organisations are trying to break down beliefs that Muslim women should not be involved in politics. It has proved a hard task since few women have been elected to the provincial parliament. International aid is provided to assist organisations campaigning for the political and social rights of Islamic women. But there is also Middle Eastern funding for more conservative activities such as the publication of booklets in Indonesian translated from Arabic and advocating restrictions on women in the name of protecting their morality. Thus outside influences play a role in the struggle for the soul of Indonesian Islam.

All these contradictory trends reflect the democratic turmoil in Indonesia today, and the regional diversity that has blossomed since the New Order straightjacket was lifted.

In addition, when we ask whether women benefit or suffer as a result of the Islamic resurgence, we have to ask which women, and who is making the assessment. The women acquiring spiritual knowledge appear to consider that the benefits gained outweigh the costs incurred, such as the discomfort of wearing restrictive 'Islamic' clothing. On the other hand, Acehnese women who are forced by the morality police to adopt such clothing may well feel that there is no such trade-off.

Moreover, working women may not be able to spend time acquiring religious merit in the way that older middle class women do. Thus costs and benefits vary with different classes and ages of women in different regions, and it depends who is drawing up the account sheet.

There are also effects of the Islamic revival on non-Muslim women (and men). Some, as in Aceh, may feel pressured to conform to Islamic standards, or even made to feel alien to their own society. Balinese Hindu women, for instance, reacted very strongly against the Anti-Pornography Law which they interpreted as an attack on their culture. It is only the efforts by Islamic leaders like Farha Ciciek, which reach out to the wider community, that are going to make non-Muslims feel secure in their own identity.

On the positive side, there is a healthy democratic ferment within the Islamic arena in Indonesia. Never has the issue of women in Islam been so publicly debated, and never have Indonesian women played such prominent roles in interpreting Islam and seeking to influence people's religious ideas and practices.

Susan Blackburn is Associate Professor at Monash University and author of Women and the State in Modern Indonesia (Cambridge University Press, 2004).

Home
Print
Newsletter
More on this topic
Muslim Feminists in IndonesiaIslam in Indonesia: Democratisation from Below
Related Topics
Democracy and civil society, Feminism in Islam, Human rights, Muslim women, The Headscarf Controversy, Women in the Islamic world
All Topics

Water buffalo and oxen have been part of the work in Indonesian fields for centuries. But the draught animals are no strangers to sport either, as can be seen in two traditional ... END_OF_DOCUMENT_TOKEN_TO_BE_REPLACED

According to the latest Reuters tally, more than 2.54 million people are now reported to have been infected by the novel coronavirus globally and 177,004 have died. As Muslims ... END_OF_DOCUMENT_TOKEN_TO_BE_REPLACED

Around the Islamic world, lockdowns and curfews are being extended and religious ceremonies are being cancelled outright in the hope of slowing the spread of COVID-19. Here’s the ... END_OF_DOCUMENT_TOKEN_TO_BE_REPLACED

While some are beginning to protest the lockdown, others are unable to bury their loved ones in accordance with Islam. Here’s the latest from across the region END_OF_DOCUMENT_TOKEN_TO_BE_REPLACED

Coronavirus continues unabated. Iran remains a hub of infection, war-torn Syria has recorded its first case and Yemen is bracing itself for the worst. Here’s the latest from ... END_OF_DOCUMENT_TOKEN_TO_BE_REPLACED

As COVID-19 sweeps across the globe, it is forcing religions to adapt and take action to prevent infection. But experts warn against using the crisis to fuel conspiracy theories. ... END_OF_DOCUMENT_TOKEN_TO_BE_REPLACED
Date:
Mail:
Send via mail

END_OF_DOCUMENT_TOKEN_TO_BE_REPLACED
Social media
and networks
Subscribe to our
newsletter