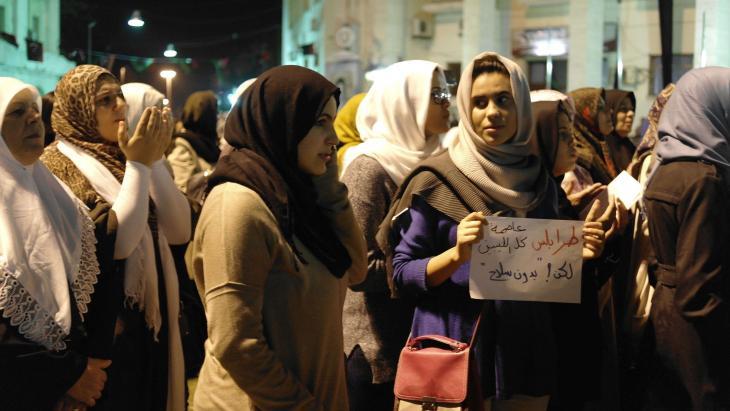 The 2011 revolution raised Libyan women's hopes that they could in future play a more active role in society and politics, leading to the establishment of many women's rights groups. However, the militias' power games and ongoing violence are putting the progress achieved thus far at risk. By Valerie Stocker

Salwa Bughaighis had waited a very long time for 25 June, the day when general elections were held in Libya. The elections were for the National Council, which is due to replace the hated General National Congress (GNC) starting in July.

Even in the afternoon of 25 June, the 50-year-old judge and activist from the eastern Libyan town of Benghazi was still calling on her fellow citizens to make their way to the polls. At around 6 pm, she told a local radio station that she had heard shots in her neighbourhood, hinting that the Rafallah Sahati Brigade was trying to stop people from voting.

The brigade is one of several militias that have seized control of Benghazi since the revolution and whose radical Islamist branch – represented primarily by the terrorist organisation Ansar al-Sharia – has declared war on the state. Since May, army units and paramilitary groups that have gone out on their own under the leadership of the controversial Major General Khalifa Haftar without any parliamentary mandate, have been fighting the militias and jihadist groupings that have formed in post-war Libya.

Bughaighis herself was critical of the heroically named "Operation Dignity" and called on election day for a ceasefire. In the evening, she told family members she had seen armed men lurking outside her home. Then, around 10 pm, she was was found dead, killed by a shot to the head and multiple stab wounds. Her husband, who according to the family had left the house to talk with the gunmen, has vanished: probably kidnapped, perhaps already dead.

A victim of the post-revolutionary power struggle

In her role as lawyer, Bughaighis had fought for human rights in her country during the Gaddafi era. She was one of the first to join the rebellion in Benghazi in February 2011. Initially a member of the National Transitional Council of the rebels, the liberal activist was quickly pushed aside by more conservative cohorts. From that point on, she devoted herself to workshops geared towards strengthening Libya's burgeoning civil society.

Most recently, she became vice president of the so-called "National Dialogue Preparatory Commission", or NDPC, a process initiated by prominent figures in civil society with the objective of bringing all of Libya's interest groups to the table to draft a kind of National Charter. This charter is designed to facilitate the work of the "Committee of Sixty" elected in February (Libya's Constitutional Assembly).

Her courageous statements and frequent television appearances brought Bughaighis not only respect but also powerful enemies. As a critic of the militia sector and in particular the radical Islamists, she made herself their target. Following death threats and a violent attack on her son, of which she was probably the intended target, Bughaighis and her family moved to Jordan several months ago, only returning home for the election.

Now, this prominent figure who was part of the rebellion from the outset and who embodied the new self-assurance of Libyan civil society has become a victim of the post-revolutionary power struggle. 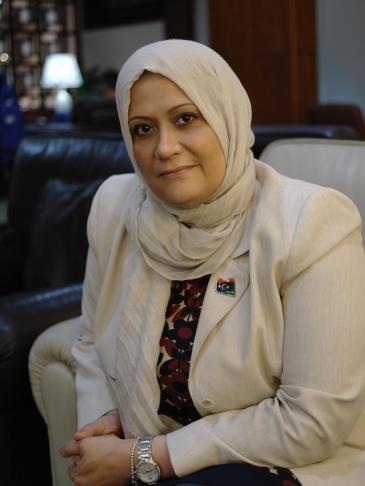 "At first, we gained many freedoms as citizens because of the revolution. But as far as most men are concerned, the role of women stops at that. The message to us is: 'Thank you for everything; now, get back into the kitchen'," says Jamila Fellag (pictured here)

Bughaighis is not the first to pay for her social engagement with her life. Last July, Abdessalam al-Mismari, also a dedicated lawyer, was executed by unknown assailants when leaving a mosque after Friday prayers. Both represented a liberal sector of society that sees the Islamist militias as a grave threat.

Bughaighis's murder shocked Libya mainly because she is a woman, and women have so far not been targeted by political violence. There are not many women who dare to stand on the frontline in a country that is often described as a "land of men". And the risk is steadily growing.

"Her activism demanded a steep tribute – her own personal security – and she was well aware of that fact," says Zahra Langhi of Bughaighis. Together, they had launched the Libyan Women's Platform for Peace (LWPP), a non-governmental organisation that promotes gender equality in society and politics.

Jamila Fellag, who is responsible for women's affairs in the Libyan Ministry of Culture, views the murder as a bleak turning point: "From now on, there are no more red lines," she commented in an interview with journalists. "We're all future martyrs."

Despite the precarious security situation in Libya, there is by no means a lack of civil society initiatives. In addition to the LWPP, there is the Libyan Women Forum (LWF), which has been organising workshops for political candidates since 2011, and more recently a training centre for women funded by the United Nations and Canada.

The Libyan Forum for Civil Society (LFCS) is trying to co-ordinate all these individual initiatives. "If we want to achieve anything, we have to work together," says Farida Allaghi, one of the LFCS founders, who goes on to say that Libyan civil society is still in its infancy and is suffering from the wide dispersion of the individual projects.

It is still much too soon to speak of equality. In an interview with Qantara, Jasmina Fellag from the Ministry of Culture tells of the difficulties she faces as a politician and woman. "At first, we gained many freedoms as citizens because of the revolution. But as far as most men are concerned, the role of women stops at that. The message to us is: 'Thank you for everything; now, get back into the kitchen'," she says with a bitter smile.

The energetic Amal Bayu, a microbiology professor who spent a long time in Germany and represents Benghazi in the newly elected parliament, laments the slow progress: "I was initially opposed to the introduction of a women's quota in the national elections. But now I think it is necessary. Libyan society is simply not yet ready for equality."

In the current GNC, which came to power in July 2012, 17 per cent of the 200 MPs are women. In the Constitutional Assembly, which was elected in February 2014, they account for only 10 per cent of members, despite the efforts of the women rights' activists. "We are still considered second-class citizens," says Bayu, who nevertheless succeeded in winning 14,000 votes on 25 June, one of the highest individual election results in the country.

In Farida Allaghi's opinion, it is not only the patriarchal mentality in the country that is preventing Libya's female politicians from playing a larger role. "In spite of all the lovely rhetoric from Libya and the international community, we women have been overlooked. If people had listened to us more on the issue of security policy instead of supporting the militias, we wouldn't find ourselves in such a difficult situation today," she says.

Arab youth express their hopes and wishes for the New Year, spanning everything from civil and political rights, to education, to arts and culture. By Rafiah Al Talei END_OF_DOCUMENT_TOKEN_TO_BE_REPLACED

Ankara is seeking to improve its relations with several states in the Middle East – such as the United Arab Emirates, Egypt and Israel. There are several reasons for this. ... END_OF_DOCUMENT_TOKEN_TO_BE_REPLACED

Despite Syria's lengthy civil war, dictator Bashar al-Assad is now being courted by many governments in the Middle East as if nothing ever happened. The reasons for this vary. By ... END_OF_DOCUMENT_TOKEN_TO_BE_REPLACED

Racism exists in the Arab world. People with dark skin are discriminated against and often see their rights curtailed. Activists have had enough of such treatment and are starting ... END_OF_DOCUMENT_TOKEN_TO_BE_REPLACED

Unauthorised immigration to Europe went down at the peak of the pandemic. As EU countries re-open, migrant flows are back up. What does it mean for the EU – and for migrants? By ... END_OF_DOCUMENT_TOKEN_TO_BE_REPLACED
Author:
Valerie Stocker
Date:
Mail:
Send via mail

END_OF_DOCUMENT_TOKEN_TO_BE_REPLACED
Social media
and networks
Subscribe to our
newsletter