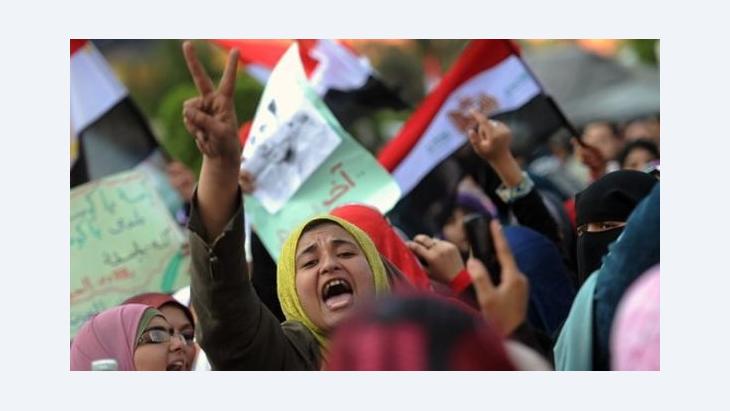 Women's Rights and the Arab Spring

The Female Face of the Revolution

One year on from the uprisings that toppled dictators Ben Ali and Mubarak, the revolution is still going on for many women activists in Egypt and Tunisia. Martina Sabra's essay takes a look at how strong their socio-political influence really is

One year on from the outbreak of revolution and the world of Arab politics is still very much a man's world. One need look no further than the make-up of the new Tunisian government or the recently elected Egyptian parliament, to find confirmation of this.

Only two per cent of Egypt's politicians are female, and that despite the fact that Egypt was an early signatory to the CEDAW anti-discrimination convention back in 1981, and the country's undertaking to increase the proportion of women in its national political bodies as one of its Millennium Development Goals.

Given all this, one might be forgiven for overlooking the fact that it was a woman who played the central role in initiating the Egyptian revolution. It was the young female blogger, Asma Mahfouz, whose appeal, via Facebook in early 2011, for people to turn the police holiday on 25 January into a day of protest, got the ball rolling.

A history of women's protest 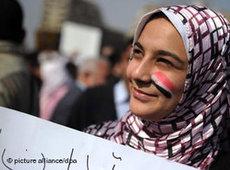 Fighting despotism and oppression: Arab women not only took to the streets during the uprisings, they were also active in the media and in the organization of protests

​​Arab women have not been slow to take to the streets in recent history, particularly when the national interest has been at stake. In Tunisia in the 1940s, women's organizations demonstrated against French colonial power. And in Egypt, as early as 1923, Hoda Shaarawi demonstratively discarded her veil in public in Cairo in a gesture inspired as much by her patriotic objections to British occupation as by a desire for female emancipation.

From an Arab perspective, therefore, there was nothing new or particularly surprising in the public participation of women in last year's riots. The strong degree of involvement of Arab girls and women via the Internet is also fairly easily explained. With the social spheres available to men and women strongly dictated by societal values, "decent" girls are expected to spend their free time at home with the family.

Twitter, social networks and blogging give them the means to overcome such limitations and the chance to communicate with the outside world. It is an opportunity that is being eagerly seized upon by ever more educated young women throughout the Arab world. So, although this may be new, it is not really a surprise.

Activists against the dictatorship

What did come as a surprise, however, was the very visible commitment and efficiency with which the large number of women involved set about organizing the uprising – no mere matter of Facebooking and Twittering, it demonstrated a willingness and determination to get out on the streets and physically go from door to door drumming up support. In Cairo and in Tunis, women took to the streets, their handbags clamped under their arms, shouting slogans against the government. And they went on doing so until the message got across and people left their homes to join them.

Women were not just there in the background helping with the logistics, they were right up at the sharp end – marching, cheering and firing up the crowds. Among their number were performance artists who organized "happenings", and musicians such as Nawel Ben Kraiem or Emel Mathlouthi from Tunisia, who gave public performances of songs that would become anthems of the revolution.

It was also striking to see how unselfconscious and respectful the men and women of the revolution were to one another. From Cairo's Tahrir Square to the Kasbah in Tunis, the inhibitions and prohibitions of Arab culture were reduced to irrelevancies as men and women worked together, painting banners and tending to the injured.

Not ashamed to stand up and be counted 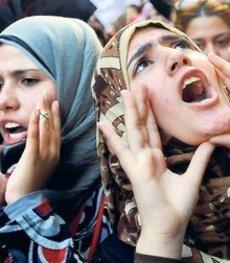 Not afraid to speak out as loudly as they can: many women demonstrated on Tahrir Square in 2011

​​Another surprising aspect was the tenacity with which the women, individually and collectively, defended themselves against the sexual violence that was perpetrated against them. In Tunisia and Egypt, the "security forces" resorted to humiliation tactics, grabbing protesting women between their legs or by their breasts in order to force them to turn back.

In Egypt, arrested demonstrators were also made to endure so-called "virginity tests" – forced gynaecological examinations, some of which were performed in the presence of groups of police officers – an experience that left victims feeling violated.

Many of the victims were too ashamed and afraid of the reactions of their own families to try to do anything about the situation. One of them did dare, however. In December 2011, 25-year-old Samira Ibrahim took her case to court and won. It was a victory that would put paid to the practice of virginity tests, and a result that opened the floodgates. Thousands of women took to the streets to protest against the military: "Enough, the women of Egypt are the red line!" they chanted.

This new self-confidence of young Arab women is an indication of the kind of profound social changes that are taking place in the MENA countries. It is a change that is most evident in the field of education. Even if the Arab world is still trailing behind the rest of the world, and half the women in countries such as Morocco and Egypt are still unable to read or write, the number of educated Arab women has, nevertheless, multiplied within two generations.

At no time in the past have so many girls and women in the MENA countries had access to formal education, and never have there been so many female academics as there are right now. It is a change that has been particularly strongly reflected in the media. Women such as Al Jazeera anchorwoman Khadija Benganna, or the Palestine reporter Shireen Abu Aqleh, have become the new role models for young Arab women. 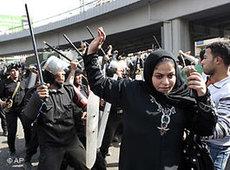 Not spared the brutal crackdown: human rights organizations and politicians condemn what they consider to be the recent alarming wave of violence against women in Egypt

​​The change is also affecting family structures. In the Maghreb countries, the number of children born per woman has halved in two decades. In the Middle East, the decline is a little slower, but there too, birth rates are falling. The nuclear family with two children has become the norm in many Arab cities.

This shift in behaviour is also having an effect on traditional Arab-Islamic social structures. The traditional correlations between "female/private" and "male/public" no longer go unquestioned. Women are now demanding their share of the public sphere.

Nevertheless, there are numerous obstacles to overcome. Patriarchal, misogynistic attitudes persist within Arab societies; indeed such tendencies have been strengthened by the rise of political Islam and by the advent of conservative Islamic missionary movements financed by the Gulf states.

Proponents of such ideologies preach the moral superiority of Islam, while at the same time insisting upon absolute obedience as a woman's duty or on the one-sided right of the men to cast out their wives – or indeed to have four of them at the same time. They are also the people who insist upon the exclusion of the "overly emotional" female sex from many public offices.

The misogynistic laws in force in almost all Arab countries are also problematic, especially those related to civil status, regulating such fundamentally important matters as marriage, divorce and inheritance. In the majority of Arab countries, such civil status matters tend to be regulated by the extremely conservative interpretations of Islamic law, which are often severely disadvantageous to women.
But criminal law is also in great need of reform in most Arab countries. Abortion, for example, is strictly forbidden across most of the Arab world, with Tunisia a notable exception, and, as a consequence, year after year, countless numbers of Arab women suffer injury or even death during illegal abortions.

The examples of Tunisia and Morocco have shown that major reforms that benefit women are possible within the framework of Islamic law, yet many women continue to suffer serious problems. Conservative judges, for instance, will often refuse to apply the law. And for many women, legal action is an option that simply remains beyond any possibility of realization, either because they lack the necessary understanding of the law, because they do not have the money or because they are not in possession of the necessary papers. In Cairo alone, there are hundreds of thousands of women who have neither a birth certificate nor, consequently, an identity card. 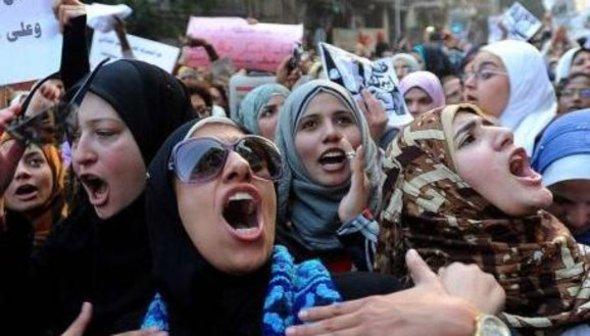 "Arab women are more self-confident and stronger than many in Europe give them credit for. They have a variety of political goals and ideologies: some want a secular state, others a society based on religion. But there is one thing that they all have in common: a desire for a properly functioning state based on the rule of law, free of corruption and chaos," writes Martina Sabra

The revolution has only just begun

The Egyptian regime and the new men in the Egyptian parliament celebrated the first anniversary of the revolution with much pomp and ceremony. But the real revolution has only just begun, and the face of this revolution is female. In Egypt and Tunisia, women are still taking to the streets, demonstrating for the rule of law and democracy.

Arab women are more self-confident and stronger than many in Europe give them credit for. They have a variety of political goals and ideologies: some want a secular state, others a society based on religion. But there is one thing they all have in common: a desire for a properly functioning state based on the rule of law, free of corruption and chaos.

When it comes to development cooperation with the new partners in the MENA countries, the combination of gender politics and the rule of law are certain to be of crucial importance.

Home
Print
Newsletter
More on this topic
Mansoura Ez Eldin on Women's Rights in Egypt: Between Hammer and AnvilInterview with Margot Badran: ''This Revolution Challenges Patriarchy''Interview with Bouthaina Kamel: ''The Revolution Is Not Over as Long as the Military Rules''Women's Rights in the Arab World: Are Saudi Women Next?Tunisian Blogger Lina Ben Mhenni: Voicing Concerns of Women
Related Topics
Arab Spring, Arabellion, Democracy and civil society, Feminism in Islam, Gender, Sexism and violence against women, Women in the Islamic world
All Topics

The outpouring of solidarity worldwide following the violent death of George Floyd should prompt us to step back and fundamentally question racist structures and privileges based ... END_OF_DOCUMENT_TOKEN_TO_BE_REPLACED

21 July marks the centenary of the birth of Mohammed Dib, one of the founding fathers of French-language Algerian literature. Born in 1920 in Tlemcen, Algeria's national writer ... END_OF_DOCUMENT_TOKEN_TO_BE_REPLACED

Among the greatest threats to Algeria’s 1,622 km long coastline are irresponsible fishing practices and a complacency about marine pollution, especially plastic waste. The HOME ... END_OF_DOCUMENT_TOKEN_TO_BE_REPLACED

The Arab world suffers from a system in which people are intolerant of "the other". This racist environment contributes to the growth of hostility and antagonism towards anyone ... END_OF_DOCUMENT_TOKEN_TO_BE_REPLACED

When residents of Zagora in southern Morocco protested in 2017, demanding the right to safe drinking water, the authorities arrested twenty-three of them in what became known as ... END_OF_DOCUMENT_TOKEN_TO_BE_REPLACED

END_OF_DOCUMENT_TOKEN_TO_BE_REPLACED
Social media
and networks
Subscribe to our
newsletter