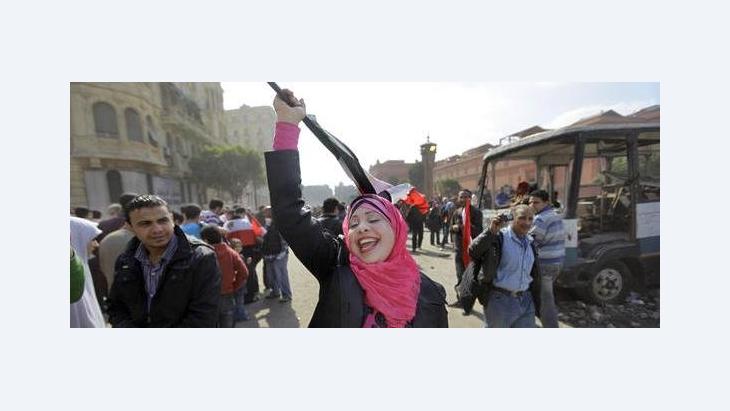 ﻿Women maintained a strong presence during the days of the Egyptian uprising – and suddenly found themselves no longer subjected to otherwise frequent sexual harassment. But it appears the previous status quo has been restored since the toppling of President Mubarak. By ﻿Mansoura Ez-Eldin

In the "Arabian Nights", King Shahryar kills a woman every night in a delirium of vengefulness – until Sheherazade comes and saves herself and her fellow-sufferers with the weapon of storytelling. Beautiful and exceedingly well-read, she enmeshes the king of kings in quips and seduces him with the power of knowledge.

The charm of her tales overcomes death and chases away his ghouls. But for all their artistry and allure, the "Arabian Nights" are clearly marked with expressions of hatred for women. And they teach us a fundamental lesson: Knowledge liberates! 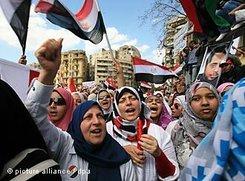 Among the first to demand the ousting of Mubarak: Women in Cairo during a protest march against the Egyptian regime on Tahrir Square

​​This old, but never altmoded lesson also applies in the context of the revolution and in consideration of the role played by women in the resistance movement. The Egyptian granddaughters of Sheherazade were marching right up front. Unlike Sheherazade – who was a daughter of her time and subject to the prevailing circumstances – they were not content to bewitch, cradle and stroke the head of the executioner, but rather courageously stood up to a brutal security apparatus.

At the very heart of the revolts, they bestowed upon these their most beautiful aspect. We saw veiled girls and girls with uncovered heads who, carried on the shoulders of their male fellow protesters, called out their slogans with burning enthusiasm.

We saw elderly women dressed in black, venturing with great effort out onto the streets although the entire nation was teetering on the brink of war; they handed out oranges to the soldiers and state security officers, begging them – in vain – not to open fire on the demonstrators, their brothers and compatriots.

On 28 January, the "Friday of Anger", preachers called on worshippers to show obedience and humility to the nation's rulers and advised them to rejoice in their rights in the eternity of paradise some day in the future, instead of demanding them now in this transient world. Despite this, women – and indeed ordinary women with long robes and veils – were among the first to demand that Mubarak stand down the moment prayers drew to a close. These were not educated women in senior positions; but alongside their male comrades, they nevertheless kept the flames of the resistance alight.

This active participation in the revolution, in the struggle for freedom and rights is evidence of knowledge – knowledge of one's own situation and of the world and of the desire to take part in the transformation. And it is more than a pleasing coincidence that Egyptian Women's Day, which is marked on 16 March, is dedicated in particular to the memory of Egyptian women who fought in the 1919 revolution against the British occupation. 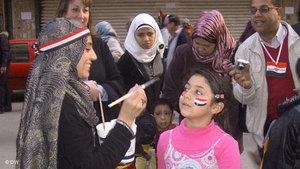 "During the first 18 days of the revolts, Tahrir Square resembled an earthly paradise, a utopia where boundaries between people were lifted," writes Mansoura Ez-Eldin

​​During the first 18 days of the revolts, Tahrir Square resembled an earthly paradise, a utopia where boundaries between people were lifted. The demonstrators shook off their familiar roles and behavioural patterns; there were no longer any distinctions between man and woman, Christian and Muslim, the ordinary worker and the famous intellectual.

It was as though a sort of temporary state of emergency had been imposed, during which each and every one of us slipped out of our old selves and observed ourselves from a different perspective, one which enabled us to establish with surprise that we were capable of change – capable, first of changing ourselves and then to play an all-encompassing role in changing the world.

Temporary lifting of the status quo

On Liberty Square and the surrounding streets, where millions gathered, there was no longer any hint of the sexual harassment that is otherwise an integral part of everyday life in Cairo; this was the safest place in the whole of Egypt for women, right here among the multitudes. But barely had Mubarak stood down, revolutionary Egypt showed a quite different face.

Only a few hundred women took part in a march planned for International Women's Day, although activists had called on a million women to take part, and the procession was heaped with deprecation and mockery; participants were harassed and to top it all, vilified as "daughters of Suzanne Mubarak", because of their involvement in the campaign for women's rights.

Not a single woman sits on the committee charged by the military council with revising the constitution, women are still discriminated against in a largely conservative society, and women are woefully underrepresented in the new government. And over the past few months, there has been an increase in the number of voices calling for a revision of marital status laws and the deletion of an article that allows women to file for divorce, instead of waiting for a divorce decree that is destined never to emerge from the bureaucracy of the civil courts. 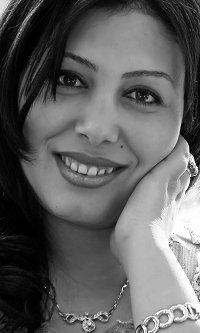 Mansoura Ez-Eldin, born in 1976 in the Nile Delta, is a writer and journalist. She works for the well-known literary magazine "Akhbar al-Adab" and is viewed as one of the most promising female authors writing in Arabic

​​Suddenly, certain people appear to be of the opinion that this law does not sit well with the Islamic Sharia system, and thus this paragraph is being demonised as the "Suzanne Mubarak Law" – in total disrespect of the fact that it is the result of a battle launched by Egyptian women activists in the early 20th century.

The most hefty blow against Egyptian women, their rights and their integrity has however been dealt by the Supreme Military Council, which not only hauled a group of female protesters from Tahrir Square in front of a military tribunal at the beginning of March, but also forced them to take virginity tests. This appears to be a new form of sexual harassment aimed at dragging the honour of the detained woman through the mud and seeking revenge for their participation in the uprising.

The military council initially denied reports of these assaults; then a general admitted to them in an interview with CNN, and attempted to justify them with the following argument: The women concerned had previously over a longer period of time taken part in a sit-in on Tahrir Square and had lived in a tent together with men. Therefore, he said, the security forces wanted to establish directly after their arrest who was no longer a virgin, so that none of the women could suddenly claim to have been abused in detention!

The gentleman concerned uttered this without blinking an eye – an expression of diseased patriarchal mindset that believes only a virgin has the right to complain of a sexual assault; and a patriarchal blindness in face of the fact that this shameful test was hardly less violating and humiliating than rape.

If I consider the virginity test – this unsavoury relict of a sinister past – together with other manifestations of sexual harassment, then it appears to me that these, at least in part, do not arise from the inclination, but much more from the desire, to violate and insult; a desire to punish a woman for her presence in the public sphere, a sphere that men still regard as their domain – to punish her for a sin that she has not even committed, indeed for her sheer existence.

One of my friends talks obsessively about how often she's been harassed on any given day. We can be immersed in any subject – suddenly she interrupts the conversation with the remark: "Today I was harassed seven times on the way home from work!"

I think that by counting up the incidents like this she is overly sensitive to anything remotely suggestive and analyses everything she sees and hears for a potential sexual subtext. It is clear that she suffers from a phobia – when a man bids her good morning, she probably experiences it as harassment. But during the days of the revolution, my friend was liberated from her obsession in one fell swoop: she moved around unselfconsciously in the densest of crowds, felt at ease in her body and the world as whole and no longer perceived herself as a victim.

But in the meantime, the status quo ante has been restored and as my friend quite rightly points out, we need a social and cultural revolution to follow up the political one. A revolution against the derogatory treatment of women, against ignorance and altmoded traditions. The women of the revolution have been assigned a dual role: not only to fight against the dictatorship, but also against ossified, regressive social attitudes.

Home
Print
Newsletter
More on this topic
An Interview with the Egyptian Author May Telmissany: For Secularism and Civil SocietyThe Merit Publishing House in Cairo: A Mecca for Intellectuals, a Centre of the Revolution
Related Topics
Arab Spring, Arabellion, Democracy and civil society, Egypt Revolution 2011, Egypt's army, Muslim Brotherhood, Muslim women, Sexism and violence against women, Sharia
All Topics

Algeria‘s regime is again cracking down on anti-fracking activists and the unemployed in the country‘s south. Yet EU countries remain keen to scale up their energy cooperation ... END_OF_DOCUMENT_TOKEN_TO_BE_REPLACED

The murder of a female student at Mansoura University in the Nile Delta has sparked a long overdue debate on femicide in Egypt. Karim El-Gawhary reports from Cairo END_OF_DOCUMENT_TOKEN_TO_BE_REPLACED

Syria, Egypt, Saudi Arabia and the UAE are among those countries increasingly misusing cybercrime legislation to silence dissent and curb freedom of speech. Could a new global ... END_OF_DOCUMENT_TOKEN_TO_BE_REPLACED

Egypt hopes to jump-start the action needed to face a warming world when it takes the presidency of major UN climate talks in November, but warns that countries need a "reality ... END_OF_DOCUMENT_TOKEN_TO_BE_REPLACED

A ceasefire has been in effect in Libya for the past year and a half. Yet after Russia's attack on Ukraine, another proxy war looms in Africa's most oil-rich country. Mirco ... END_OF_DOCUMENT_TOKEN_TO_BE_REPLACED

It is the biggest order in the history of the Siemens Group: a 2,000-kilometre railway network for high-speed trains is to be built in Egypt. But the project raises numerous ... END_OF_DOCUMENT_TOKEN_TO_BE_REPLACED
Author:
Mansoura Ez-Eldin
Date:
Mail:
Send via mail

END_OF_DOCUMENT_TOKEN_TO_BE_REPLACED
Social media
and networks
Subscribe to our
newsletter