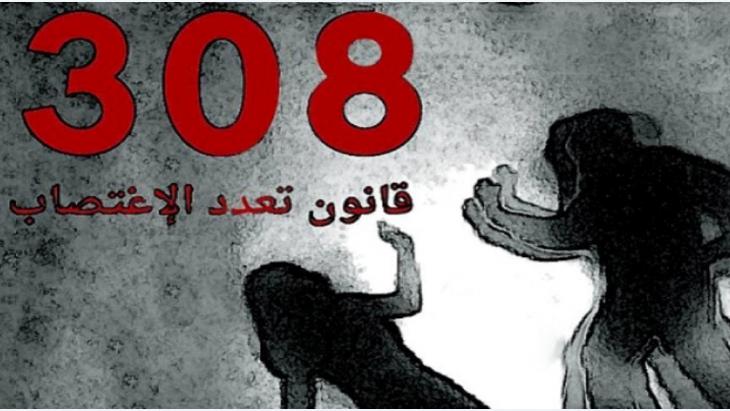 Many Arab countries have laws that grant offenders immunity from prosecution if they marry the woman they have raped. While Jordan has taken the first steps to change this controversial legal situation, Lebanon looks likely to follow suit. By Dunja Ramadan

16-year-old Amina Filali from Morocco killed herself with rat poison a few months after she was made to marry the man who had raped her. Her family and a judge are said to have forced her into marriage in order to "free" her from the social stigma of being a rape victim.

This case from 2012 not only shocked Morocco, but caused a stir worldwide and drew attention to the misogynistic practice in many Arab countries that once had – and in some places still has – a basis in law. These are laws that grant an offender immunity from prosecution if he marries his victim after raping her. Two years after Amina Filali′s suicide the law in question, Article 475, was removed from the Moroccan criminal code.

Now Jordan, too, has taken the first steps to change this controversial legal situation. Last month the cabinet there declared itself in favour of striking Article 308 from the criminal code. The cabinet′s decision still has to be approved by parliament. But many activists are already counting it as a success. "It′s a Jordanian dream come true," Laila Naffa, an activist with the Arab Women Organisation, told the Jordan Times.

The fight goes on 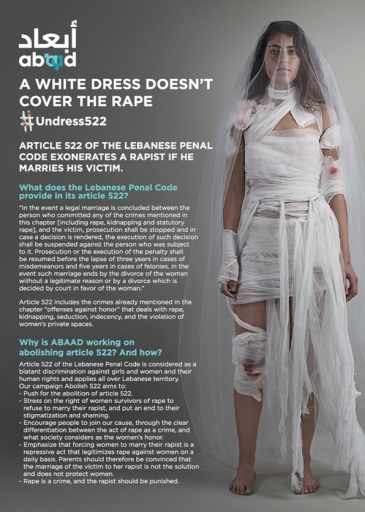 Lebanese NGO Abaad is spearheading the campaign to abolish Article 522 of the country's penal code. The wording is identical to that of Jordan's Article 308. Activists in both countries remain committed to condemning this shameful clause to the legal history books

Female activists have spent years drawing attention to the unjust practice and campaigning for the abolition of the article with the slogan "Rape and then marry free of charge".

The marriage has to last a minimum of three years for the offender to retain immunity from prosecution. In the past year, the law has been changed: now a rapist can only hope for immunity if his victim is between 15 and 18 years old.

That hasn′t convinced the women of Jordan; they are still fighting. For many years, the law′s supporters have argued that marriage is the only way to guarantee the victim′s safety. At least this prevents honour killings, they say and gives the rapist a chance to "atone" for his crime by taking responsibility for his actions.

In Italy, too, the so-called "rehabilitating marriage" existed until 1978. The sex offender was not prosecuted if he married his victim. These patriarchal structures are now being broken down, one country at a time.

The non-governmental organisation "Equality Now" spoke to some of the victims. A 20-year-old Jordanian woman had been raped by her 55-year-old boss. She said that instead of headache tablets, he had given her a sedative. It was only when she discovered she was pregnant that she told her family.

Her boss offered to marry her – citing Article 308. "Although I bore so much hatred for him in my heart, my family forced me to marry." Her only hope was that her child would be registered as legitimate and with its father′s name. But shortly afterwards they divorced; she couldn′t bear to live with the man who had raped her. He agreed to the divorce, but didn′t acknowledge the child as his own.

According to a survey carried out by the Jordanian Institute for Solidarity Among Women, 62 percent of Jordanian women believe that rapists only marry their victims to avoid prosecution. Only ten percent of the women surveyed think that the men feel genuine regret for their crime.

In Lebanon, too, female activists are campaigning for the abolition of Article 522. On Beirut′s famous beach promenade recently, 31 white lace wedding dresses hung from palm trees and fluttered in the breeze. It was an installation created by the Lebanese artist Mireille Honein, who had already mounted a similar campaign in Paris.

This kind of law takes away women′s "essential being, their identity," Honein told the AFP news agency. The Lebanese minister for women, Jean Oghassabian, also took part in the campaign. The law came from the "stone age" and it was high time to abolish it, said Oghassabian.

The protest keeps being reignited: a few months ago, women in wedding dresses marched through the streets of Beirut. "A white dress doesn′t cover up rape," they shouted. It generated the hashtag #Undress522. The issue was discussed in the Lebanese parliament on 15 May. Similar laws still exist in countries like Iraq and Tunisia, according to the NGO "Equality Now". The Kingdom of Bahrain is currently debating a reform.

In Egypt, a similar law was abolished in 1999. Since then, convicted rapists may even face the death penalty. The 2009 verdict against the "ten wolves", as the Egyptian press called them, caused a particular stir in the Arab world: a 28-year-old woman from a town in the Nile Delta was abducted from her apartment and raped by ten men in a remote field. The ten men were subsequently sentenced to death.

Alaa Abd el-Fattah, arguably Egypt’s most prominent democracy activist, has just been handed another lengthy prison sentence. Despite this, a book of his writing has recently been ... END_OF_DOCUMENT_TOKEN_TO_BE_REPLACED

People in Arab countries have been talking more openly about sex and sexuality for some time now, especially on social media. And for the first time ever, they have the vocabulary ... END_OF_DOCUMENT_TOKEN_TO_BE_REPLACED

A prominent rights group in Egypt, the Arabic Network for Human Rights, is ending operations just as the country braces for a controversial NGO law. Is this the beginning of the ... END_OF_DOCUMENT_TOKEN_TO_BE_REPLACED

Moncef Marzouki was Tunisia's first democratically elected president after the fall of dictator Ben Ali. Today he is the most prominent critic of increasingly counter- ... END_OF_DOCUMENT_TOKEN_TO_BE_REPLACED

Asef Bayat, professor of Sociology at the University of Illinois, Urbana-Champaign, has been studying revolutions and how they affect people since 1979. In his recent book, " ... END_OF_DOCUMENT_TOKEN_TO_BE_REPLACED

Every year in December, the team at Qantara.de takes a look back at the articles that proved most popular with our readers. This year is no different. Here is a run-down of the ... END_OF_DOCUMENT_TOKEN_TO_BE_REPLACED
Author:
Dunja Ramadan
Date:
Mail:
Send via mail

END_OF_DOCUMENT_TOKEN_TO_BE_REPLACED
Social media
and networks
Subscribe to our
newsletter