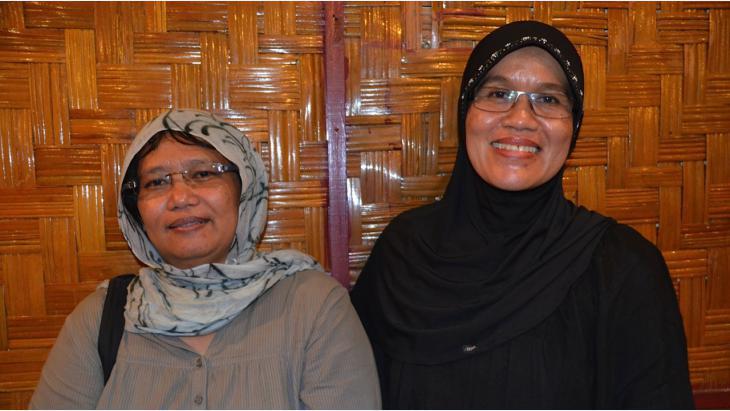 Azriana Rambe Manalu, 46, and Samsidar, 48, are two of the best-known women in Aceh. In this interview with Christina Schott, they talk about how the introduction of Sharia in Aceh in 2003 has affected society – and women in particular

What is your assessment of the situation for women in Aceh ten years after the tsunami?

Azriana Rambe Manalu: More and more women are being given important positions and are acting as decision-makers. However, they don't have enough influence to change social, economic and political life in Aceh. Indeed, the culture of marginalising women is even increasing.

Before the tsunami, many women had to provide for their families while their men fought. After the peace agreement, the men came home and the women returned to their usual role of home-maker. Since much fewer women than men survived the tsunami, they were also rarely asked about their wishes and needs in the reconstruction process. In addition, the movement of women has been significantly restricted since the introduction of Sharia law.

To what extent are women restricted by Sharia?

Azriana: Women can take up certain positions in Aceh today: we have mayors, school principals, managing directors. But they always do predefined tasks and do not really have any creative freedom. You must adhere to strict dress codes; in some areas, women are not even allowed to go out alone. But that is not only the case in Aceh: throughout Indonesia, there are now about 300 Sharia bylaws that discriminate against women.

Samsidar: The consequences of corporal punishment, which is only practiced in Aceh and applies equally to all, are much worse for women than for men. A man who is publicly caned for drinking alcohol, gambling or having illegitimate sex, can usually carry on with his life afterwards. For women, the social ostracism is much greater: they are publicly insulted, lose their jobs, their husbands divorce them and their children no longer dare to go to school. 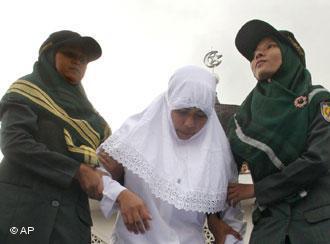 A woman is held by members of the Sharia police in Banda Aceh. Aceh is the only province in Indonesia where Islamic law has been in force since 2003. Last spring, a decree was passed making Sharia applicable to non-Muslims too

Most women in Aceh say that they think Sharia is important. The Mayor of Banda Aceh is even an outspoken proponent of Sharia. How does this fit together?

Azriana: No Muslim woman wants to voice criticism of Sharia; they don't want to give the impression that they are questioning Islam. This is a taboo that they just cannot break because of their faith and their education. But this is not about criticising Islamic law per se, but about the interpretation and application of it that discriminates against women and poorer people.

One of the main arguments put forward by supporters of Sharia is that it prevents the decay of morality. Do the strict laws lead to more moral behaviour?

Samsidar: Not really. Sexual violence against women has increased by 30 per cent in the last three years, including many underage victims, who are extremely young. One reason for the increase is likely to be that more and more victims are coming forward because of the increase in campaigns that raise awareness about women's rights. However, there is a suspicion that violence against minors has increased, because it is more and more difficult to meet with peer partners beneath the watchful eyes of the Sharia police. An older man with a little girl, though, hardly excites suspicion, because he is considered a family member. Currently we are running a study to see whether there is a connection.

Azriana: The governor has just signed a new law, according to which a rape victim must name at least four witnesses to prove the crime. That's almost impossible given the circumstances of such crimes. The culprit, however, is presumed innocent if he swears five times that he was not there. If the raped woman has already mentioned the name of the perpetrator, she can be flogged for defamation. In this way, hardly any women in Aceh will dare to report rape in the future. Journalists won't report either for fear being sued for libel. In this respect, Sharia will improve moral conditions on paper at least; the population, on the other hand, is being systematically silenced. 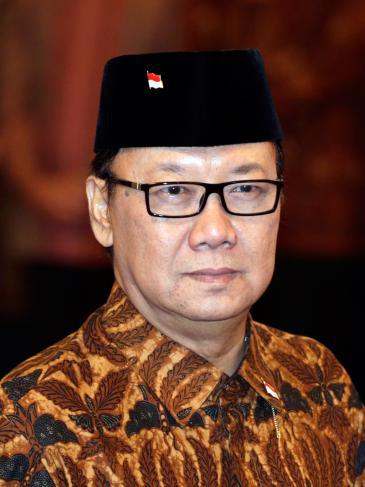 Women's rights activist Azriana hopes that Indonesia's Minister of the Interior Tjahjo Kumolo (pictured here), who has in the past been critical of Sharia, will take action on the controversial bylaw obliging a rape victim to name four witnesses to the crime

Is there any way to appeal against these bylaws?

Samsidar: Once the bylaw is registered with a number, a request for a judicial review would have to be submitted to the Supreme Court. Existing laws can only be annulled by the Constitutional Court: the constitution is the supreme law in the country and therefore stands above the provincial legislation of Aceh, despite its autonomy. And if a provincial law violates the constitution – for example, because it disregards fundamental rights – then it must be revised. The old government, however, has never taken a step in this direction.

Do you not think the new government will take action?

Azriana: The new Minister of Interior, Tjahjo Kumolo, comes from the Indonesian Democratic Party of Struggle (PDI-P), which has so far always criticised Sharia law. So we hope that he will now take action.

How did the people in Aceh respond to your criticism of Sharia?

Azriana: We are constantly receiving threats, mostly by text message and e-mail. The threats come from both ordinary citizens and high officials. Many say we should move away from Aceh if we do not like the conditions here.

Samsidar: As an Acehnese citizen, I have the right to live in Aceh. It is because of my anger at this injustice that I continue to fight for better living conditions so we can be an example to other women, not to bow to social pressure.

Azriana Rambe Manalu, 46, and Samsidar, 48, are among the best-known women in Aceh. Both work for the National Commission on Women's Rights (Komnas Perempuan), and for the legal aid organisation LBH Apik Aceh, of which Samsidar is chairwoman. Lawyer Azriana is also General-Secretary of the Voluntary Women Team for Humanity (Tim RPuK) in Banda Aceh.

With its traditions of neutrality and non-alignment, Indonesia has had to tiptoe around the Ukraine war debate. Pro-Russia sentiment in the region complicates Jakarta's foreign ... END_OF_DOCUMENT_TOKEN_TO_BE_REPLACED

Calls for an environmentally-conscious form of Islam are growing in Indonesia, as climate change poses enormous ecological challenges for the country. Experts say it could change ... END_OF_DOCUMENT_TOKEN_TO_BE_REPLACED

Indonesia has become a primary battleground between democratic and autocratic visions of Islam in the 21st century, with Nahdlatul Ulama pitted against Abdullah bin Bayyah, a ... END_OF_DOCUMENT_TOKEN_TO_BE_REPLACED

Research project "The Global Qur'an", brainchild of Professor of Islamic Studies Johanna Pink and sponsored by the European Research Council, analyses the history and ... END_OF_DOCUMENT_TOKEN_TO_BE_REPLACED

At a time when even some rich democracies are electing con men as their political leaders, the success of Indonesian President Joko Widodo deserves wider acclaim and appreciation ... END_OF_DOCUMENT_TOKEN_TO_BE_REPLACED
Author:
Christina Schott
Date:
Mail:
Send via mail

END_OF_DOCUMENT_TOKEN_TO_BE_REPLACED
Social media
and networks
Subscribe to our
newsletter