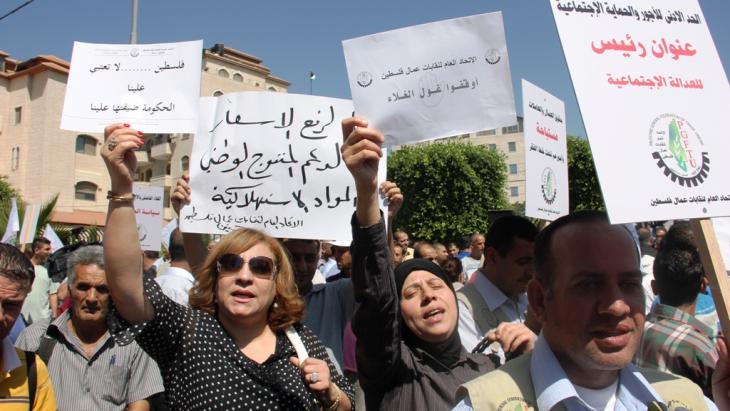 In the Palestinian Territories, a legal quota stipulates that at least 20 per cent of all seats on municipal councils must be held by women. As progressive as this sounds, elected councilwomen often face opposition and obstacles. A local non-governmental organisation is lending them support in a most original way. By Reham Alhelsi and Petra Schoening

In Palestine's conservative, patriarchal society, many men still want women to neither participate in politics nor to assume leadership. They believe women should focus on their roles as housewives and mothers. Frequently, male members of local councils only allow their female colleagues to assume tasks they consider "suitable for women".

Male members of local councils also tend to try to exclude female members from the decision-making process and to minimise their influence. Often, council meetings are held at times that are unsuitable for women, for instance in the evenings, when women are expected to be at home. Many Palestinian women do not agree with such practices and attitudes.

In order to strengthen the standing of councilwomen, the Palestinian Working Women's Society for Development (PWWSD), which is based in Ramallah in the West Bank, came up with the idea of lending them support by setting up female shadow councils. The members of these shadow councils give advice to the elected councilwomen and help them gain a stronger foothold in other ways.

Since the summer of 2011, the PWWSD has been carrying out this project in selected villages of the West Bank with financial support from the Theodor Springmann Foundation. The women have adopted the concept with enthusiasm. Within a short space of time, they have established 15 women's shadow councils. There have even been requests for support from other municipal councils in the West Bank as well as from Jordan. The PWWSD plans to establish another 20 shadow councils this year.

Women's shadow councils emphasise gender issues and women's needs in municipal affairs. Their members comprise volunteers and – in some cases – the elected councilwomen themselves. Together, they aim to ensure the participation of women in the decision-making process and to foster ties with their constituents. One goal is to increase the number of women participating in the political and social life of their municipalities. The shadow councils encourage women to become engaged in public affairs with an eye to shaping society in a way that takes gender-specific needs into account. Generally speaking, women must be made more aware of their rights.

In order to ensure that they are up to their tasks, the PWWSD trains the shadow councilwomen in things like negotiating skills, self-confidence, communication skills, teamwork, municipal legislation, leadership and assessing community needs. 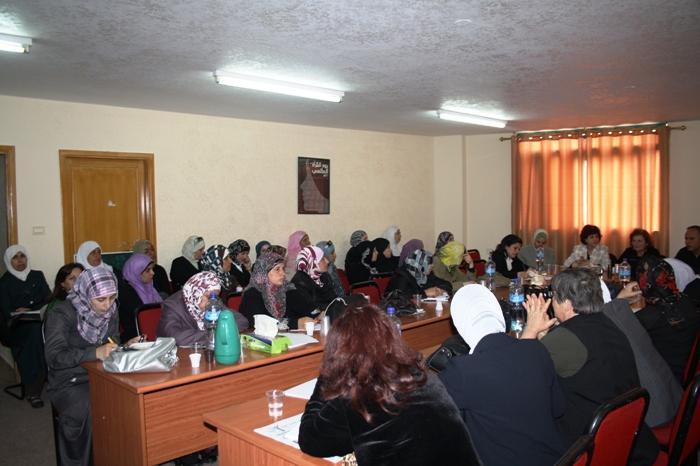 Each shadow council consists of between five and nine women. They are either elected by women in the community or appointed by acclamation by the women. Meetings are held once or twice a month and more frequently if needed. Typically, the venue is a local government building or the office of a local women's organisation. In some cases, the municipal councilwomen are officially members of the shadow councils; in other cases they attend its meetings as guests.

In order to represent their constituents well, members of the shadow councils and councilwomen maintain close contact with the women of the community and with local women's initiatives, organisations and schools. They seek contact with the local media and political leaders, raising awareness of gender issues. Of course, they raise these issues in council meetings too.

Um Ammar is a member of the shadow council in Beitunia, a village on the outskirts of Ramallah. She says her experience is "wonderful" and "exceptional". The shadow council of Beitunia has organised visits between the council members and local women's organisations to overcome barriers.

Yasmin Hajiji is a member of the shadow council in Qarawat Bani Zeid in the district of Ramallah. She explains that she is co-operating with council members to find solutions for the district's water shortages and waste problems. They have already been successful in some respects: a new network of water pipes has been installed, and new rubbish bins have been put in place in Qarawat Bani Zeid. To fund these investments, the municipal council and the shadow council worked hand in hand to collect donations from local organisations. Progress has also been made regarding local schools: the number of classrooms has been increased, and some schoolyards have been improved.

Although tight budgets obviously restrict the impact of women's shadow councils in Palestinian municipalities, some things can be done without much money. Examples include the establishment of a children's playground and a garden in Ni'lin in the district of Ramallah or the planting of trees in Till in the district of Nablus after Israeli settlers destroyed and burned trees. Women in Till also received training in food processing and tree harvesting. They learned how to produce seedlings and graft a variety of trees.

Working for development and for the promotion of women and their needs in Palestine: the Palestinian Working Woman Society for Development (PWWSD) is one of the largest women's NGOs in the Palestinian territories. One of its aims is to develop a democratic Palestinian society on the basis of gender equality, respect and human rights

The shadow council in Ni'lin has similarly organised training courses for women in tailoring, hairdressing and computer use. It also offers courses on women's rights. The goal is to strengthen women's self-confidence and promote their active involvement in society. For instance, the women's shadow council has succeeded in making the municipal council meet during the daytime, which makes it much easier for women to take part. It has also managed to get the council to regularly inform its female members about all projects and plans.

In order to improve the work of the shadow councils, two political forums have been established: one in the district of Ramallah for the central and southern West Bank and one in Nablus for the north. The two forums aim to convene all members of shadow councils in order to share experience, discuss issues, find solutions and plan joint action.

The two forums serve another purpose too: they are giving women a voice in society and at political level, thus promoting their civil and political involvement. This is particularly important because the shadow councils are involved in municipal affairs. They also take part in political workshops and conferences.

The shadow councils have been raising awareness in many areas. They encourage young women to become active both in their villages and at national level and they encourage members to run in municipal and parliamentary elections in the future. At first, the leaders of the municipal councils were reluctant to accept the idea of the shadow councils. Now, however, many support the idea. Some have even called for an extension of the project.

The women's shadow councils are indeed a good way of boosting the self-determination of the Palestinian people. While affiliations to families and political parties still matter more in some settings than competence and qualification, women are now participating to a greater extent in local decision-making processes and community development. That serves the democratisation of society. More active involvement of women means more sustainable development for Palestine.

Reham Alhelsi is a regional planner who works as a programmes director for the Palestinian Working Women's Society for Development (PWWSD). Petra Schoening is a consultant and trainer specialising in the Middle East.

Past attempts to reconcile logic and belief within Islam tend to be dismissed today – not because they lack merit, but because they were politically defeated, argues Mustafa Akyol END_OF_DOCUMENT_TOKEN_TO_BE_REPLACED

November 2022 sees the Arab world firmly in the spotlight with the COP27 in Egypt and the FIFA World Cup in Qatar. Public trust in MENA governments is weak, thanks to their ... END_OF_DOCUMENT_TOKEN_TO_BE_REPLACED

Thanks to climate change, the Middle East is heating up faster than any other part of the world, putting the region's ancient pyramids, castles, holy and other heritage sites at ... END_OF_DOCUMENT_TOKEN_TO_BE_REPLACED

After a two-year hiatus, the Arab League re-convened at the beginning of November in Algiers against a backdrop of uncertainty and discord. By Pierre Boussel END_OF_DOCUMENT_TOKEN_TO_BE_REPLACED

In the run-up to the COP27 global climate summit, hosted by Egypt in November, it is worth noting that little rainfall, aggressive heatwaves and worsening drought make the Middle ... END_OF_DOCUMENT_TOKEN_TO_BE_REPLACED
Author:
Reham Alhelsi & Petra Schöning
Date:
Mail:
Send via mail

END_OF_DOCUMENT_TOKEN_TO_BE_REPLACED
Social media
and networks
Subscribe to our
newsletter