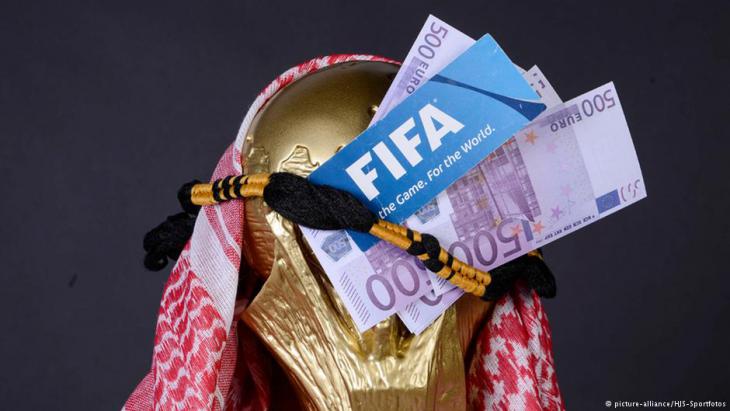 World Cup 2022 and Qatari reforms
So much hot air

In a world where human rights are increasingly being put on the backburner, fears are growing among rights and trade union activists that Qatari promises of labour reform and greater liberalism are just that – mere promises. By James M. Dorsey

The controversial awarding of the hosting rights has certainly contributed to more open discussion in Qatar of previously taboo subjects, such as the rights of workers who constitute the vast majority of the population of the tiny, energy-rich Gulf state; the definition of Qatari identity; what rights, if any, non-Qataris should have in obtaining Qatari citizenship; and the rights and social position of women and gays.

Issues that, owing to Qataris′ sense of privacy and family honour, were once under lock and key are now on the public agenda. Earlier this month, a 28-year old Qatari decried in an article in Doha News that government policy denies young men and women the right to marry the person of their choice.

Writing under the pseudonym Yousef, the young Qatari described how he was forced to divorce his wife of East European origin after the government refused to sanction the marriage and give his spouse a residence permit because she was not a Muslim – even though she had converted.

″Our marriage changed me. It took me outside my bubble and made me question our culture′s values. I didn′t understand why, for example, we Qatari men are allowed to go to clubs where alcohol is served, but at the same time the committee was telling me that my wife′s culture and traditions did not fit ours. This did not make any sense to me,″ Yousef wrote. ″I feel the Qatari government is playing with people′s lives. It hurts to see my country talking about human rights on the global stage, but then denying citizens the right to marry whomever they choose. I want to know why my request was refused. Was it because my family isn′t important enough?

Do we not know the right people? I know plenty of Qatari men married to foreign women who got their approval in less than a month, just because they know someone in the government. And why is it okay to marry a second wife or a third wife, but refuse a man permission to marry just one? ″ he added. Yousef ultimately came to the conclusion that ″I will have to leave Qatar and live abroad if I want to get married to a foreigner. I hate that it has to be like that. I love my country. I don′t want to leave Qatar or leave my family, but what other option do I have?″

Like the rights of migrant workers caught in a patronage system that puts them at the mercy of their employers, Yousef′s plight goes to the heart of Qatar′s most existential problem: the viability of a demography in which the citizenry accounts for a mere 12 percent of the population and fears that any change will endanger their grip on their society, culture and state.

Six years into the preparations for the 2022 World Cup, few of those involved still believe that Qatar′s excruciatingly slow pace in reforming, if not abolishing the patronage or kafala system, is down to the country's stark demographic realities.

To be sure, in the wake of the awarding of the World Cup and in contrast to other Gulf states, Qatar initially co-operated with its critics who took it to task for the labour and living conditions of workers constructing World Cup-related infrastructure. The Qatari 2022 committee, as well as a few other major Qatari organisations, adopted standards and model contracts in co-operation with the likes of Amnesty International and Human Rights Watch. 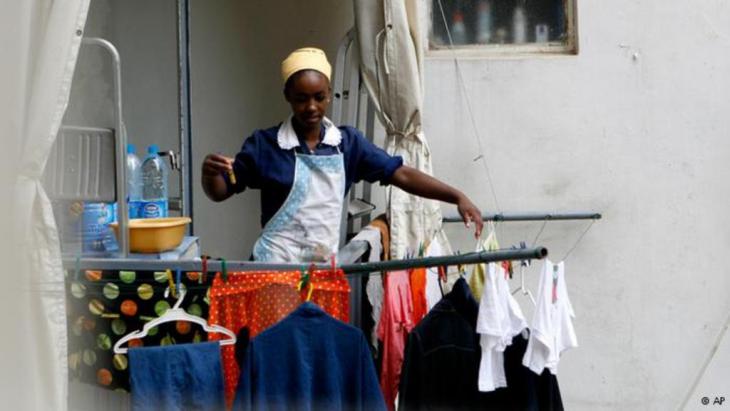 FIFA World Cup host in 2022: the award has prompted more open discussion in Qatar of previously taboo subjects, such as the rights of workers who constitute the vast majority of the population of the tiny, energy-rich Gulf state; the definition of Qatari identity; what rights, if any, non-Qataris should have in obtaining Qatari citizenship; and the rights and social position of women and gays

New measures designed to streamline and curtail abuse of the patronage or kafala system are scheduled to come into force before the end of the year. Yet the measures fall short of granting workers′ basic rights.

Against the backdrop of a recent Amnesty report that counters assertions of the Qatari committee that it is applying the standards but cannot enforce them on non-World Cup contractors, FIFA is likely to assume more direct responsibility for the issue and come under greater pressure regarding the labour fiasco.

With a Dutch trade union taking FIFA to court in Switzerland on the issue of labour rights in the Gulf state, the soccer body has announced that starting with the Qatar World Cup it would scrap local organising committees for its flagship event.

The 52-page Amnesty report listed eight ways in which World Cup workers employed for the showcase Khalifa International Stadium were still being abused and exploited. It charged that, despite efforts to the contrary, workers still pay exorbitant recruitment fees, live in appalling conditions, are lured to Qatar with false salary and job promises, do not get paid on time, cannot freely leave Qatar or change jobs and are threatened by employers when they dare complain.

The Qatari 2022 Supreme Committee for Delivery & Legacy asserted in a statement that ″challenges in worker conditions existing during early 2015″ that had been identified by Amnesty had largely been addressed by June of this year. It said the problems involved four of some 40 companies involved in work on the Khalifa stadium and that three of those firms had been banned.

″The tone of Amnesty International′s latest assertions paint a misleading picture and do nothing to contribute to our efforts. We have always maintained this World Cup will act as a catalyst for change — it will not be built on the back of exploited workers. We wholly reject any notion that Qatar is unfit to host the World Cup,″ the statement said. 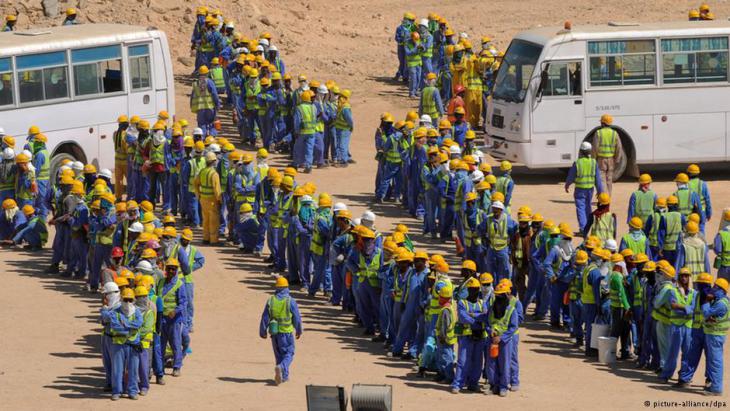 No real improvement: "a 52-page Amnesty report listed eight ways in which World Cup workers employed for the showcase Khalifa International Stadium were still being abused and exploited. It charged that, despite efforts to the contrary, workers still pay exorbitant recruitment fees, live in appalling conditions, are lured to Qatar with false salary and job promises, do not get paid on time, cannot freely leave Qatar or change jobs and are threatened by employers when they dare complain," writes Dorsey

Not that alcohol is the litmus test of a successful Qatari World. The tournament moreover may attract a different demography with far more fans from the Middle East, North Africa and the Muslim world who care less about alcohol than their Western counterparts.

Nonetheless, the backtracking on alcohol coupled with increasingly strained Qatari relations with human rights groups and trade unions and the snail pace of labour reform casts a shadow on Qatari sincerity.

Qatar may well feel that the rise of populist leaders across the globe could reduce pressure on it to embark on real reform. That could be true. Yet, by the same token, populist leaders riding a wave of nationalism may also need to be seen to be standing up for the rights of their nationals working in foreign lands.

Dr. James M. Dorsey is a senior fellow at the S. Rajaratnam School of International Studies, co-director of the University of Wurzburg′s Institute for Fan Culture and author of ″The Turbulent World of Middle East Soccer″ blog, a recently published book with the same title and also just published ″Comparative Political Transitions between Southeast Asia and the Middle East and North Africa″, co-authored with Dr. Teresita Cruz-Del Rosario

Much has changed in the European post-fascist firmament since former SS officers, veterans of the collaborationist Vichy government and other dubious figures established the ... END_OF_DOCUMENT_TOKEN_TO_BE_REPLACED

One year ago the Taliban returned to power, seizing Kabul; the U.S. and its allies made a panicked exit from the country. Of all the books written on the subject, four stand out ... END_OF_DOCUMENT_TOKEN_TO_BE_REPLACED

In "Iran. Die Freiheit ist weiblich", journalist Golineh Atai describes the dogged resistance of courageous Iranian women against the Islamic Republic and the mullahs who have ... END_OF_DOCUMENT_TOKEN_TO_BE_REPLACED

Unflattering terms were used at a German Football Association human rights congress aimed at "intensifying the discussion" ahead of the World Cup. One speaker in particular made ... END_OF_DOCUMENT_TOKEN_TO_BE_REPLACED

Egyptian authorities have Mada Masr in their sights once again after critical reporting. But the editor of the country's last independent news source is adamant they will continue ... END_OF_DOCUMENT_TOKEN_TO_BE_REPLACED
Author:
James M. Dorsey
Date:
Mail:
Send via mail

END_OF_DOCUMENT_TOKEN_TO_BE_REPLACED
Social media
and networks
Subscribe to our
newsletter