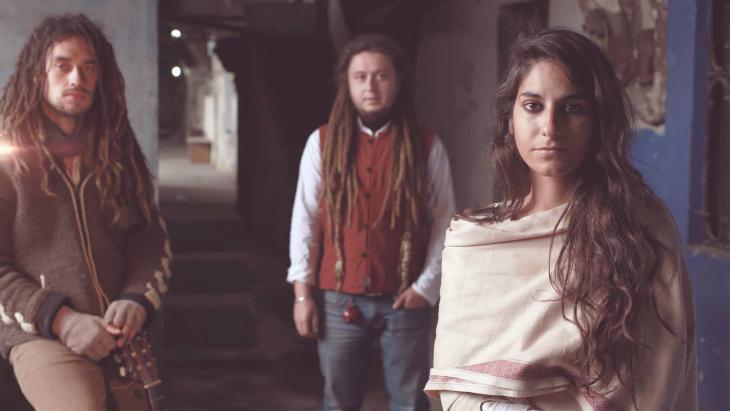 The band Light in Babylon plays world music from Istanbul. They came to fame on the streets of the megacity and are now playing at international festivals. Ceyda Nurtsch talked to singer Michal about the Istanbul vibe

It all started five years ago in one of Istanbul's liveliest shopping streets – or to be precise, on the pavement of the street walked by some two million people a day, past shops and the red heritage trams that trundle past several times an hour, now a symbol of the Beyoglu district.

That street was Independence Avenue, Istiklal Caddesi, where for a few years now, Kurdish lute players have lined the pavement alongside hang-playing Rastafarians, guitarists covering American pop songs, new-age hippies combining didgeridoo and santur, and where in recent months Syrian oud players have been demonstrating their talent.

At that time, explains Michal, the singer and frontwoman of Light in Babylon, she and Julien had just met and discovered the "incredible musical potential that Istanbul, as a multicultural city, was offering us". They went out looking for other musicians and came across Metehan, who was busking solo on the avenue with his santur – an instrument where strings stretched across a sounding board are played using tiny mallets.

The three of them got along well – in musical terms. Verbal communication was less straightforward to begin with, though, as they all speak different languages. The singer Michal Elia Kamal is Israeli with Iranian roots, the guitarist Julien Demarque is French and Metehan Ciftci comes from Turkey. Nevertheless, Light in Babylon was born. 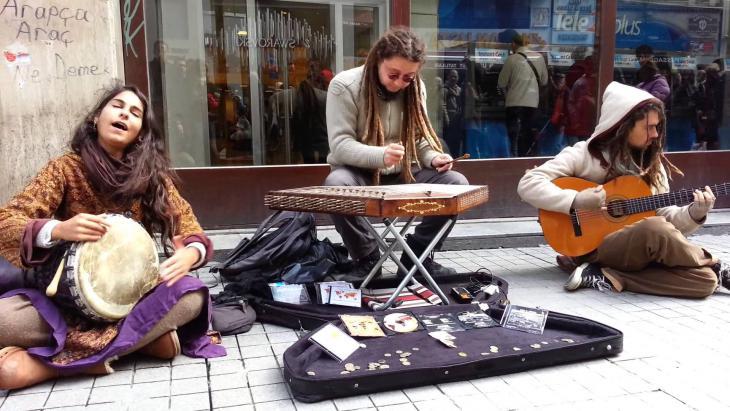 Sharing a message of peace and love with passers-by: "Buskers demonstrating their talent on shopping streets are a fairly recent phenomenon in Turkey," says singer Michal, but passers-by have reacted very positively to the music of Light in Babylon

Having started out playing covers, the trio now writes its own music. And the band no longer only plays on the streets but also makes appearances at international festivals across Europe and co-operates with other international artists. Their often wistful songs, marked out by strong vocals, are about love and desire, searching and places called home. The music has a great rhythm, with the santur lending an Oriental sound. With her petite figure, long black hair and captivating voice, Michal enchants audiences.

The band chose its name to reflect the impressions they gained while playing street music. "Our first stage was the street," says Michal. "People are walking home, going to work or on their way back – no one looks, no one laughs. But as soon as you start making music people stop, listen, laugh, cry, dance and talk to each other." Babylon, says Michal, is the name of a system that forces us to look in a particular direction.

Although the three young people began their musical career together on Istiklal Caddesi in Istanbul, they reject the term "street band", as Michal explains. "Yes, we played on the Istiklal and we still do, but we don't belong to the street. We're musicians who want to share our music with other people in a public place. But that doesn't mean the street defines us as a band or our music." In fact, she says, it's the differing origins of the band's members, their own experiences and memories, and the places where they perform that have shaped their music.

Buskers demonstrating their talent on shopping streets are a fairly recent phenomenon in Turkey. But passers-by have reacted very positively to their music, says Michal. When she sings, her whole body seems to become an instrument. She also accompanies herself on the tambourine for some songs.

They can positively feel people's hunger for music, says Michal, especially for music in a public space. "We saw that there's a strong public culture in Turkey. People like to be outside, free and independent. They meet up, eat, listen to music and dance."

Istanbul's energy and daily drive find their way into the melody and rhythm of the band's music, and it seems almost as if the noise of the streets and the lively comings and goings are part of the music that drives up their pulse. The city determines the character of Light in Babylon's music and also the musicians' creativity, says Michal.

Istanbul is home to a mix of people and musical styles like nowhere else in the world. Yet there is one big But: "Living in such a big city has its price. The increasing environmental problems, for example. The city is like a big machine that pulls you in without you noticing and that influences your mind and, more importantly, your soul." 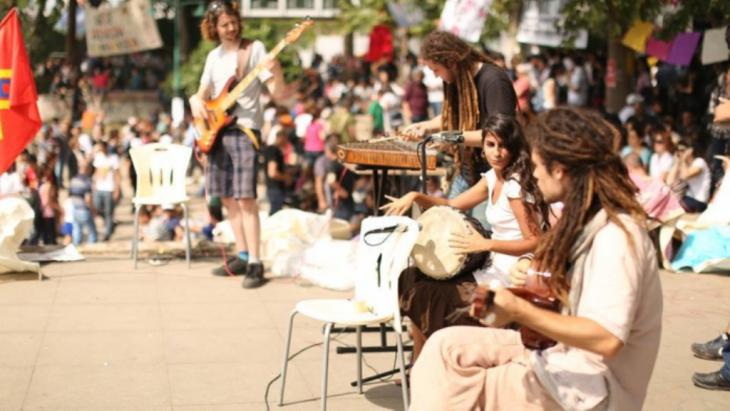 Intercultural worlds of sound as a means of protest against environmental destruction and political dictates from on high: Light in Babylon were a regular fixture at the Gezi park protests in Istanbul in the summer of 2013. They are pictured here performing in that very park

For peace in the Middle East

Living in Istanbul has taught her how important it is to have a tree next to one's house; otherwise there's no quality of life. "All that goes into our music: people, the city, nature."

Michal's Hebrew lyrics deal with oceans that want to be crossed and continents that want to be reached, they're about love found beyond the horizon like in the song "Wind". About taking flight and the call of the ocean in "The Way to the Sea". And in between, they come back time and again to Istanbul, the city of crowded streets and people with tired eyes, a city that trembles with fear in the song "Istanbul".

The band members have a wider view too, however, and are sensitive to the current political situation in Turkey and the Middle East. Their Twitter account features the message "Peace in the Middle East," for instance. For the band, making music means making the best of the gift we call life, says Michal, stressing that their fans come from all over the world: Iran, Israel, Palestine, the USA, Europe, India and Pakistan.

"When people hear our music, they don't think of any one politician or a certain government. There's something in it that goes deeper. We live in the Middle East and in this wonderful place, we have a lot of empathy for the great suffering many people have to go through. With our music, we send out messages and prayers for peace."

Home
Print
Newsletter
More on this topic
The Turkish Oriental dub band "Baba Zula": Music from the fringes with a rebellious soulThe Turkish music collective Bandista: "Every resistance movement has its own voice"Culture in Turkey before and after Gezi: The end of Cool Istanbul
Related Topics
Gezi Park protests, Musical worlds, Turkish music
All Topics

Recep Tayyip Erdogan, disappointed by the European Union’s reluctance to integrate Turkey into its ranks, has re-directed his country’s diplomacy toward the Maghreb and Africa to ... END_OF_DOCUMENT_TOKEN_TO_BE_REPLACED

Having taken control of the traditional media, Turkish President Erdogan is now extending his reach to the social networks. A new law has been passed to rein in major digital ... END_OF_DOCUMENT_TOKEN_TO_BE_REPLACED

Although a unity government was formed in Libya in March 2021, tensions and possible crises between the political actors are already emerging. What problems does the country face ... END_OF_DOCUMENT_TOKEN_TO_BE_REPLACED

In Islamic mysticism, Ramadan is more than just a period of prescribed abstinence, signifying an opportunity for inner contemplation. Marian Brehmer explores the spiritual ... END_OF_DOCUMENT_TOKEN_TO_BE_REPLACED

The USA and NATO plan to withdraw from Afghanistan by September. The operation is risky, the outcome uncertain. Many Afghans fear civil war. The quake on the Hindu Kush will also ... END_OF_DOCUMENT_TOKEN_TO_BE_REPLACED

The neo-Ottomanism propagated by Erdogan has long been more than rhetoric and symbolic politics. This can be seen from recent developments in parts of northern Syria, where Turkey ... END_OF_DOCUMENT_TOKEN_TO_BE_REPLACED
Author:
Ceyda Nurtsch
Date:
Mail:
Send via mail

END_OF_DOCUMENT_TOKEN_TO_BE_REPLACED
Social media
and networks
Subscribe to our
newsletter