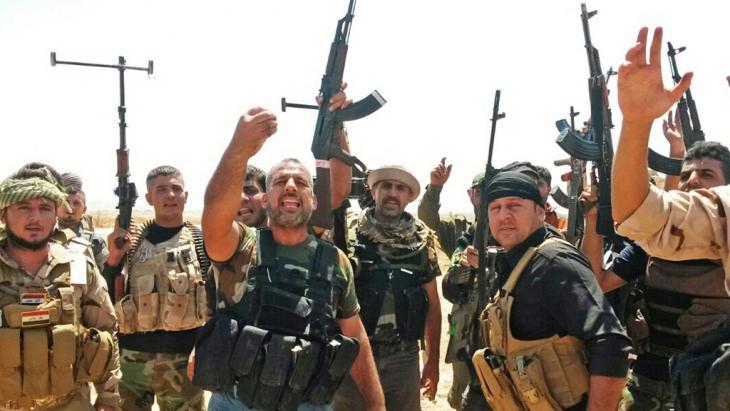 Yazidis and Kurds in Iraq
Are we arming the right people?

We are told that the Kurds saved the Yazidis from IS terrorists, but the truth is far more complex than that. Yazidis also suffer frequent discrimination in Kurdish areas. Who can guarantee that German weapons will not one day be turned on this minority? By Patrick Franke

Anyone talking to Yazidis living in Germany about the situation in northern Iraq will hear not only words of desperation and grief, but also expressions of anger and rage. Astonishingly, these are directed less at the group known as Islamic State (IS), and more at the Kurdish Regional Government. The IS terrorists' brutal treatment of the Yazidis came as no surprise to them. But the conduct of Iraqi-Peshmerga units during the IS attack on the region of Sinjar was a horrible shock. As far as the Yazidis are concerned, they were betrayed by the Peshmerga.

Where does this Yazidi anger at the Kurdish Democratic Party (KDP), which governs the autonomous region, and its Peshmerga, come from? Did the Peshmerga not fight to carve out an escape route for the Yazidis, when they were surrounded by IS terrorists? Was it not the Kurdish autonomy government that generously gave refuge to the Yazidis and other religious minorities persecuted by IS? This is how the situation is currently being presented in Germany, a version of events that is also used to justify potential arms shipments to the Kurds. But upon closer inspection, it would appear that the true picture is far more complex. And it's not so easy to distinguish between black and white.

The main source of news reports from the Sinjar region are Arabic-language news portals principally run by Yazidis. They facilitate the exchange of information between the Yazidis in Iraq and diaspora communities in Europe. The site Bahzani.net, for example, is hosted in Germany and is regarded as an independent news portal. Anyone who spends time reading some of the reports recently posted here – that's about 30 to 40 each day – gains a better understanding of the Yazidis fury. 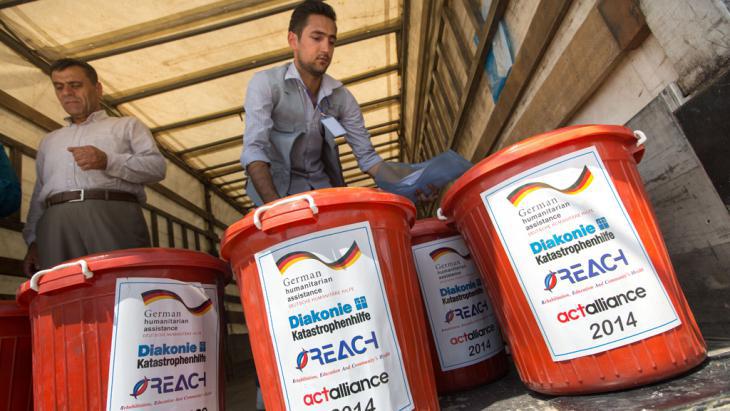 Some Yazidis are complaining that aid sent by fellow Yazidis living abroad is not reaching them because the Kurdish administration is preventing the distribution of the aid. There are also reports that German humanitarian aid for refugees took no less than five days to be processed at the airport in Erbil (pictured here)

Firstly there are many appeals for help from Iraq: Yazidis complain that aid sent by their brethren to the homeland is not getting through because the Kurdish administration is preventing its distribution. Indeed, it's thought to have taken more than five days to process German aid shipments for refugees at Erbil airport. Other Yazidis report that Erbil has issued a strict ban on demonstrations aimed at drawing attention to the desperate plight of the refugees, as well as on establishing any contact with western media.

But the main reason for their anger is something that happened earlier this month. Yazidis are describing these events as the "Shingal catastrophe". They claim that KDP Peshmerga withdrew from the Sinjar region hastily and without a fight as IS fighters approached, although they knew that this would spell death and enslavement for the Yazidis, who are viewed as "infidels".

The Kurdish general who ordered this retreat has since been dismissed, but as far as the Yazidis are concerned, he is nothing but a pawn that has been sacrificed. They had believed that the Peshmerga would defend them; they themselves were previously refused arms. They now view the sudden Peshmerga withdrawal from the Sinjar region as the preliminary climax of a policy in the autonomous region aimed at their marginalisation and destruction.

Yazidi reports on the second part of the story, the rescuing of the Yazidis from the Sinjar Mountains, also differs from those that appeared in the German media. According to Yazidi sources, it wasn't the Peshmerga of the Iraqi KDP – which is set to be supplied with weapons from Germany in the near future – who fought to create an escape route for Yazidis encircled by IS, but rather the popular defence leagues of the Kurdish Democratic Union Party (PYD) from neighbouring Syria. Many female fighters were also involved in the rescue operation. Several of them died in the battle against IS terrorists.

The PYD units are also currently the only force making serious efforts to recapture the Sinjar region from IS terrorists. But because of the PYD's ideological proximity to the underground organisation PKK, any co-operation with the West is viewed as taboo. However, in view of the heroic deployment of its forces in the Yazidi rescue and the support it also gives to Christian minorities in northern Syria in the fight against IS, the West should review this position. 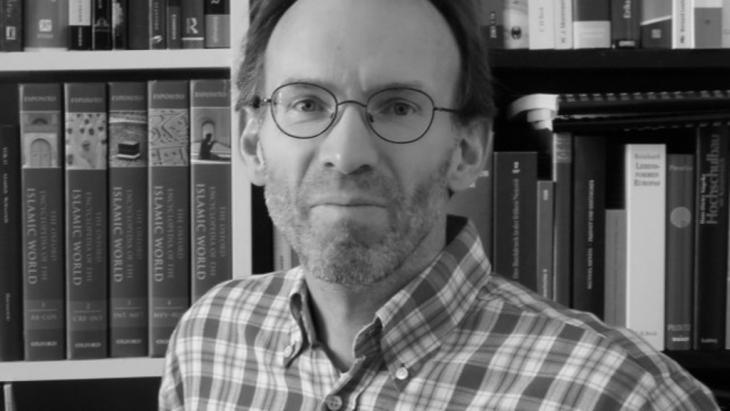 "Arms shipments to this side must absolutely be contingent upon recipients obliging themselves to protect religious minorities and afford them adequate political rights. A neutral body should regularly monitor whether this obligation is being fulfilled," says Prof Patrick Franke

The Yazidis are taking an exceedingly sceptical view of western arms shipments to the Kurdish Regional Government. Can anyone be sure that these weapons will not be turned on them at some point? Even in the Kurdish autonomous region, Islamic State enjoys considerable support, and there are reports that 700 young Kurds have already defected to the radical group. In the autonomous region, Muslim clerics preach unchecked against the Yazidi "infidels". The word on the street is that the Yazidis have lost their faith in the Kurdish Regional Government. And in any case, the autonomous region affords them few political rights.

In the Kurdish regional parliament, 600,000 Iraqi Yazidis are represented by one single deputy, and there are suspicions that he is being bribed. High-ranking positions are not conferred upon Yazidis, whether these be in government, administrations or within Peshmerga units. Relations between the Yazidis and the Kurdish Regional Government are extremely strained at present.

Following events in Sinjar, it can no longer be presumed that the Peshmerga will guarantee the protection of this religious minority. For this reason, arms shipments to this side must absolutely be contingent upon recipients obliging themselves to protect religious minorities and afford them adequate political rights. A neutral body should regularly monitor whether this obligation is being fulfilled. Only then will weapons from the West also protect Iraqi Yazidis.

For the time being, the Yazidis of Iraq cannot envisage a future for themselves in the region. Conditions in the north of the country appear to them to be too hostile. Many will attempt to emigrate to Europe. Their chief concern continues to be the plight of the many women and children still detained by IS, as well as the situation of destitute relatives in the Kurdish autonomous region. International aid is evidently not getting through to most of them.

Patrick Franke, 47, holds the chair for Islamic Studies and is managing director of the Centre for Interreligious Studies at the University of Bamberg.

Giessen, Eichsfeld, Kusel, Berlin – cars bearing old German number plates are the latest trend on the streets of Cairo. Many Egyptians regard the discarded plates as chic. What ... END_OF_DOCUMENT_TOKEN_TO_BE_REPLACED

Tunisia has been going through a severe economic and political crisis in recent years. More than one in three young people there are unemployed. For many skilled, qualified and ... END_OF_DOCUMENT_TOKEN_TO_BE_REPLACED

German imams have publicly expressed their solidarity with the women of Afghanistan. In a letter of protest, the clerics say that the Taliban regime's decree barring women from ... END_OF_DOCUMENT_TOKEN_TO_BE_REPLACED

At the end of every year, the team at Qantara.de gives you a run-down of the ten most-read articles on the site over the past 12 months. Here is a quick overview of the stories ... END_OF_DOCUMENT_TOKEN_TO_BE_REPLACED

Social engagement is often motivated by religious factors. A new book explores the background to these community efforts and appraises how effective they are in helping to ... END_OF_DOCUMENT_TOKEN_TO_BE_REPLACED

The government in the Netherlands, one of the last European nations to abolish slavery, has made an historic apology. But some feel that there is still a long way to go. By Ella ... END_OF_DOCUMENT_TOKEN_TO_BE_REPLACED

Comments for this article: Are we arming the right people?

To the author.. Thank you fo helping get the truth out. Please keep doing hat you are doing for us yezidis, all we hear American news is the same thing your hearing on German news.. Portraying peshmerga as heroes for saving yezidis when they didn't fight for yezidis and most left sinjar even before the attack. Please don't give up on this story, it's th truth and it has to come out.. Where are the millions America, Canada and Germany sent in humanitarian aid? There's videos showing some yezidis recieved canned food that was two years expired. That's not western aid, that's Iraqi govt aid from years ago given to yezidis by KRG. They keep western aid for themselves and give yezidis rotten expired food hoping more can die so they can wipe out our religion... If anyone thinks religion is not the reason, think again. After all we are "infidels" in their eyes.

It is surprise to me that the author talks about the situation of Yizidis as if they are under danger of Kurdish people than ISIS. This guy told me this then it is that. First of all Peshmarge did wrose not only in Yizidis area but also Kurdish Mulsim area look at Makhmoor district 40km south of Erbil capital, look at Jalawla near Khanaqin.
This seems to be a new campaign against Kurdish people which only recently got some attention from international community. This article aims at degradating the support by couple of countries to Kurdish people.
Why you think arms sent by some countries to Kurds are likely to be used against minorities? what evidence you have? do you know that hundreds of Kurdish people convert to Yizidis as a kind of support and solidairty? do you that hundreds of thousands of them now are among their fellow Kurds in Kurdistan region? do you know that thousands of them were freed by PKK and YPG? did any kind of group target happen against minorities on the base of belief? do you know KRG has legally prevent Muslim people to buy and occupy in key minorities' area to prevent demographic change and underclass those religious groups? do you know these and other facts or you donot have eye to see them. if you respect your reader you need to be a professional writer by demonstrating the whole picture of news materials. If you cannot check facts on the ground, you need to find another job. It is clear that journalism will be in happier condition without such self-made stories.

END_OF_DOCUMENT_TOKEN_TO_BE_REPLACED
Social media
and networks
Subscribe to our
newsletter