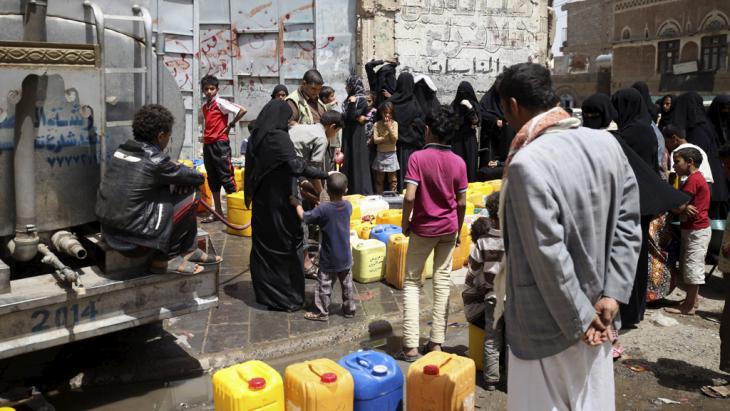 Food and water are in short supply not only in the conflict zones of Yemen, but also for many Yemenis stranded in Egypt since the conflict broke out in their country. As the Saudi-led alliance bombards Houthi positions in Yemen, it is considered too dangerous for the refugees to return home. By Andrea Backhaus in Cairo

"I want to go home," says Ali, rubbing his eyes. "The Egyptians can't keep us here." Ali, a stocky man in his mid-thirties, stands at the back of a crowd of people in front of a beige building and looks around. "This madness has to stop," he grumbles.

In mid-March, Ali made the journey from Sanaa, the Yemeni capital, to Cairo with his brother. They only intended to come for a short holiday, planning to visit the pyramids, the Egyptian Museum and Tahrir Square. But just a few days after they arrived, war broke out back home. "A huge disaster," says Ali.

For the past month, the alliance led by Saudi Arabia has been bombing positions held by the Houthi rebels in Yemen. Hundreds have already been killed and 100,000 are said to have fled the fighting. The numbers of casualties and refugees are growing daily. With each passing day, Ali's hope of being able to return home fades. This is why he is protesting in front of his embassy today, like every day.

Ali is one of the approximately 5,000 Yemenis currently stranded in Cairo. There are many families here, as well as elderly Yemenis who travelled to Egypt to consult a doctor or to undergo surgery. They exhausted their savings to make the trip to Egypt and are now facing serious problems: they can hardly afford accommodation in Egypt; food and water are in short supply.

The Yemeni Embassy has let it be known that although they are doing everything within their power, they do not have sufficient resources to help their compatriots. In order to draw the attention of the governments of Yemen and Egypt to their dire predicament, the "stranded", as they call themselves, assemble every day in front of the Yemeni Embassy, which is located in one of Cairo's residential districts. Women sit on the pavement; men chant slogans. They wave cardboard placards bearing phrases like "Stop the war in Yemen!" 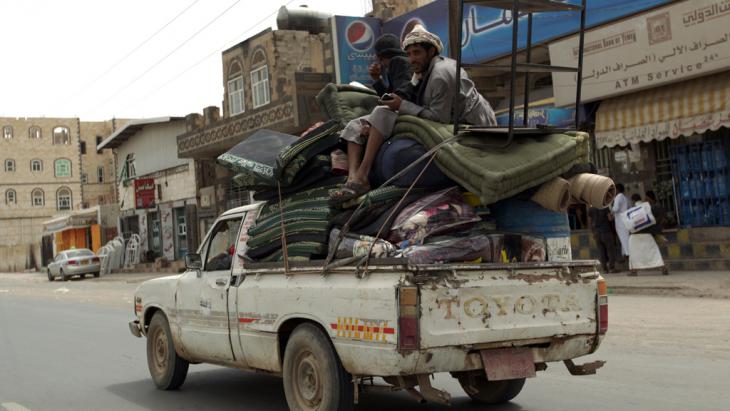 Where to go? Whether in Cairo or back home in Yemen, there is a lack of food, water and a safe place to sleep. Many Yemenis have to survive on insufficient supplies and little support. Pictured here: Yemenis fleeing Sanaa in a pick-up truck loaded with personal belongings

"Better to die in the war than to starve to death"

Yemen's government has to bring its citizens back to Aden, says Ali. His brother, standing next to him, nods his head. "We can't work in Egypt and we hardly get any support. Our money is running out." He adds, "It would be better to die in the war than to starve to death here."

At any rate, the Egyptian government has granted the Yemenis the right to remain in the country indefinitely. This probably has something to do with the fact that the government of President Abdul Fattah al-Sisi suspects that the fighting on the Arabian Peninsula could last some time; Egypt is one of the strongest supporters of the military campaign against the Houthis.

Officially, the Egyptian regime insists that the military action taken by the Sunni allies is meant to prevent the Houthi rebels, which are backed by Iran, from seizing the Bab el Mandeb Strait. The strait is of particular importance to Egypt, as almost all of the ships passing through the Suez Canal, which connects the Red Sea with the Mediterranean, traverse the waters here.

Experts, however, are of the opinion that Sisi simply cannot risk denying Egypt's support to Saudi Arabia. Since the military coup of 2013, Egypt has been massively dependant on financial aid from Riyadh and the Gulf States in order to prevent an economic collapse.

"The Egyptians have let themselves be bought by the Saudis," believes Waheeb, an engineer from the southern Yemeni city of Aden, sitting on a plastic chair drinking tea. "With unemployment, the lack of investment, and tourists staying away, the level of poverty leaves the Egyptians with no other choice." 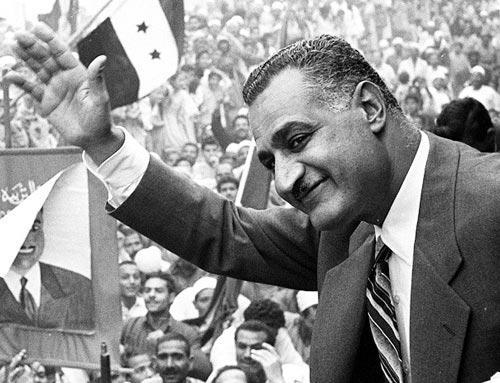 "Nasser's Vietnam": In the 1960s, President Gamal Abdel Nasser deployed tens of thousands of Egyptian soldiers in northern Yemen to support a coup against the country's monarchy. The fatal decision cost the lives of over 20,000 Egyptians

Many Yemeni nationals congregate at a Yemeni restaurant just a few streets away from the embassy. Here, they stare at the flickering television screen, discuss the news and talk about their plight. Like Waheeb, quite a few come from the coastal city of Aden. According to reports from the International Committee of the Red Cross (ICRC), Aden has become something of a ghost town. Waheeb, who travelled to Cairo on business, leaving behind his wife and children, says that everyone in the restaurant is worried about his or her loved ones.

At the same time, the situation in Cairo is becoming increasingly difficult, he says, gesturing to the men sitting around him. "We feel like refugees." A group of Yemeni students and businessmen are privately distributing food and medicine to those in need. Nevertheless, many are forced to beg or rely on donations. "The Egyptians don't have anything themselves," he says. "What are they supposed to give us?"

This view is shared by many Egyptians. Even though President Sisi has attempted to gain the support of the population for the military campaign by reminding them that Saudi Arabia is helping Egypt by easing the growing energy crisis and that the military campaign is meant to preserve security in the Gulf region, there is a growing fear among Egyptians that their country is getting entangled in a potentially devastating conflict.

"We haven't learned a thing!"

Arab columnists point to the fear of war across the country. More critical voices remark that the military decided to take part in the fighting without first achieving a national consensus on the matter. In fact, many of Cairo's traders, shoeshine boys and tea vendors strongly disagree with the military's decision. They say that their country has enough problems as it is. After all, Egypt has experienced four changes in government in four years, protests, violence, and almost daily terrorist bombings; the country simply does not need a war in Yemen on top of it all, they say.

"The war is a catastrophe," murmurs Abdullah, a kiosk vendor near the restaurant. "The Arabs are tearing themselves apart," he adds. He says that he doesn't want to criticise President Sisi, "but we haven't learned a thing!"

Abdullah recalls, as do many elderly Egyptians, the last time Egypt got involved in a military campaign in Yemen. To this day, the event remains a collective trauma for the country. In the 1960s, President Gamal Abdel Nasser deployed tens of thousands of Egyptian soldiers in northern Yemen in an attempt to support a coup against the country's monarchy. It proved a fatal decision and cost the lives of over 20,000 Egyptians, resulting in a catastrophic defeat for Nasser. Even today, historians refer to the event as "Nasser's Vietnam". "We know the risks in Yemen," says Abdullah. "We can't allow history to repeat itself."

They’ve already got the Louvre; they’ll soon have a Guggenheim Museum as well – and now the Emirates have added literature to their quest for cultural supremacy in the Arab world ... END_OF_DOCUMENT_TOKEN_TO_BE_REPLACED

Years in the making, Sisi's elite New Administrative Capital will isolate most Egyptians from their centres of government in an effort to fortify the regime against any social ... END_OF_DOCUMENT_TOKEN_TO_BE_REPLACED

Professor Timothy Brennan's "Places of Mind: A Life of Edward Said" is a detailed biography of one of the most important intellectuals of the twentieth century, taking us on a ... END_OF_DOCUMENT_TOKEN_TO_BE_REPLACED

China has long portrayed itself as a strong supporter of the Palestinian cause. It has also claimed that in sharp contrast to the stance of the USA, its position is based on ... END_OF_DOCUMENT_TOKEN_TO_BE_REPLACED

Recep Tayyip Erdogan, disappointed by the European Union’s reluctance to integrate Turkey into its ranks, has re-directed his country’s diplomacy toward the Maghreb and Africa to ... END_OF_DOCUMENT_TOKEN_TO_BE_REPLACED

END_OF_DOCUMENT_TOKEN_TO_BE_REPLACED
Social media
and networks
Subscribe to our
newsletter