Yusuf Atilgan's novel Aylak Adam (The Loiterer) was first published some 50 years ago. The Swiss publisher Unionsverlag has now brought out a German translation in its "Turkish Library" series. The book is a classic piece of 20th-century modern literature. A review by Volker Kaminski 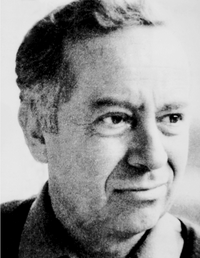 Born in Manisa, West Anatolia, in 1921, Atilgan worked as a Turkish teacher for many years. From 1976, he translated and edited for various Turkish publishers. In 1989, Yusuf Atilgan died in Istanbul

​​C. is a nervous, argumentative, at times loutish young man, an archetypical young lad. He calls himself a "loiterer", but his days are far from relaxed and lazy. He paces the city without pause, buying paintings at artists' studios and meeting Ayse, a young painter with whom he starts a giddy relationship. C. is also an intellectual, a book-lover and passionate cinema and theatre-goer, and a critical observer of his surroundings, who accuses others of living "ant-like" obedient lives.

Yet the reader soon starts to wonder what drives C. to walk around bustling Istanbul so tirelessly, to zigzag the city on trams and visit one café after another, while never arriving anywhere.

The secret of aimlessness

Atilgan's novel "The Loiterer" is a classic of Turkish literature. When it was first published in 1957, the critics were divided. Some accused the author of ignoring social aspects and focusing solely on the alienation of the individual in society. Yet it is precisely this aspect that makes the story so fascinating today.

The novel reads as astoundingly modern – not least thanks to Antje Bauer's excellent translation. Its concentration on C., the misfit with his rebellious tones, creates a precise portrait of a young man worn through to the weft by life. Although C. offensively portrays his loitering as a way of life, in the course of the novel it becomes clear that his aimless wanderings are significant of his mental state, and that there is a secret behind them.

Atilgan narrates the story in crystal-clear language in the third person, but also offers an outsider's view using occasional letters and diary entries, illuminating the plot from other viewpoints – those of C.'s girlfriends Ayse and Güler. After a while, it becomes clear that C. is apparently on an unending search for "her", following her through the streets of Istanbul. SHE appears to be a phantom he is chasing.

​​He waits impatiently in cafés to spot her on the street, and when he thinks he has made her out he jumps up from his seat and runs outside.

C. can only afford to dedicate all his time to his search because his father is wealthy and he has no need to work. Yet this father is also the key to understanding C.'s strange fixation.

Behind C.'s obsessive behaviour lies a childhood trauma, which secretly guides his steps. His fanatical game of cherchez la femme is reminiscent of Hitchcock's Vertigo, which was incidentally made at almost the same time (1958). As in Hitchcock's film, C.'s torturous search is based on a mental trauma. The search leads him back into the past – and the revelation of the trauma is the climax of the novel.

C. tells his girlfriend Ayse what happened in his childhood: C. lost his mother when he was only a year old, and grew up with his father, a rich broker, and his loving aunt Zehra, who took the place of his mother. One day, C. looked on as his father, a drinker and a notorious womaniser, seduced aunt Zehra. When his father noticed C. watching them, he grew angry, reaching out for his son and injuring him. From that point on, C. has hated his father and is even relieved when he dies later in the story.

Following this catastrophe, which adopts the mechanics of Oedipus rather too schematically for today's readers but was much to readers' taste in the late 1950s, C. starts out on his restless life of wandering. He begins a career in the military, but is not a success and starts travelling.

​​He drinks more and more at difficult times – just like his father, although he would do anything to be unlike him. His fixation with women, his restless search for "her" is another unwilling continuation of his father's legacy – although C. really seems to yearn for genuine intimacy.

By the end of the book we have understood C's tragic situation, why he finds it so difficult to live a free and self-determined life and why he cannot "find peace in today".

The Swiss publisher Unionsverlag has done German readers a great service by publishing this multi-dimensional classic in translation. The book also includes a very well informed afterword by Yüksel Pazarkaya, providing not only information on Yusuf Atilgan's life and work, but also a précis and Pazarkaya's interpretation of the novel.

Interview with Hasan Ali Toptaş
"I Try to Expand Life, One Word at a Time"
In 2006 Turkish novelist Hasan Ali Toptaş was chosen to receive the most respected literary award in Turkey, the Orhan Kemal Prize. Fatma Sagir spoke to him about his twin careers as novelist and as court bailiff

Murathan Mungan
The Muse of Mardin
Murathan Mungan is one of Turkey's most popular contemporary writers – not least because of his provocative and experimental style of narration and his habit of challenging social taboos. Nimet Seker presents a portrait of the author